I have just had a big falling out with the activist samba band Rhythms of Resistance. RoR are not doing very well, with falling membership, enthusiasm and attendance, mainly because they haven’t had a proper rehearsal space.
So I, on a late night whim, without recourse to interminable consensus meetings, struck out on my own and set up a facebook RoR group, inviting members of the group who were already on facebook as individuals.
This caused uproar and I ended up leaving the band! But, hehe, I still manage the facebook RoR group so in effect I am now the leader of a breakaway virtual RoR sect.
Anyway, my argument was that who gives a toss if the CIA owns it, tracks it or whatever. So they’ll get to find out that I’m interested in remote viewing, spirals, Judy Garland and wood fires. Big deal.
The revolutionaries of RoR got really offended when I suggested that that CIA might not find them as subversive and dangerous as they imagined. In fact, as it’s an open band, the CIA or MI5 could easily join.

“Let’s hope they have rhythm!” I joked.

In the end, avoiding then wading through dreary arguments, justifying my appalling action, I ‘lost it’ around Christmas and told them, on their list (no doubt tracked by the secret service) to shove it up their collective (big c and little c) arses. 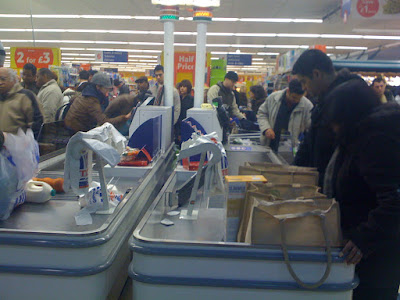 Sometimes this nouveau guilt can be taken to ridiculous extremes. Recently at a party, I met an old friend, an activist. He told me that his girlfriend had broken her back on holiday in Turkey. Shocked, I asked:

“Oh dear. How is she? What happened?”

“Oh it was awful, we tried so hard to be carbon neutral we even thought of taking a train to Turkey. In the end we got a flight because we didn’t have much time off. But the holiday was fantastic: an eco-resort with yoga, organic food, meditation.”

“So what happened with your girlfriend?” I ask again.

“She was hit by a motorcycle. Terrible, we had to fly in doctors and nurses, get extra seats to fly back. Our carbon footprint was severely affected. We felt really bad about that.”

I stood there, trying to process this. Finally I said:

“Surely, when your girlfriend has a broken back, that is one time when ecology and the state of the planet just isn’t important? If something happened to my daughter, it would be the least of my concerns.”

He smiled, thought and said “I suppose so”.