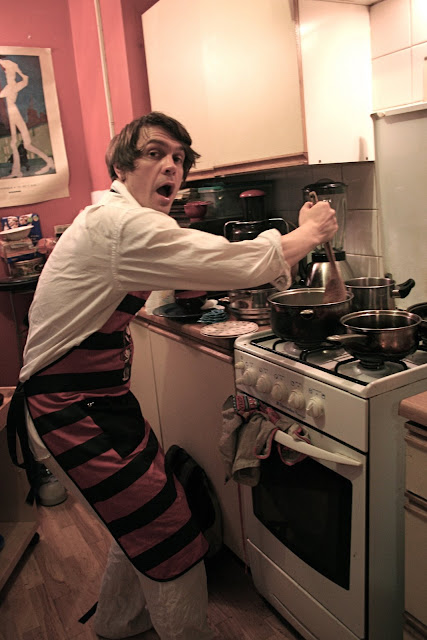 Horton at the stove in his Dennis the menace apron 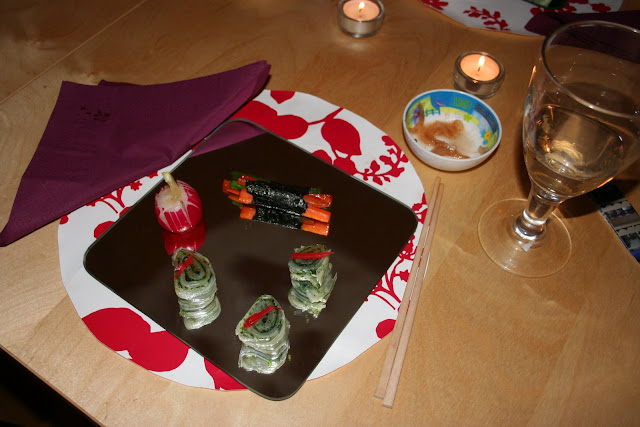 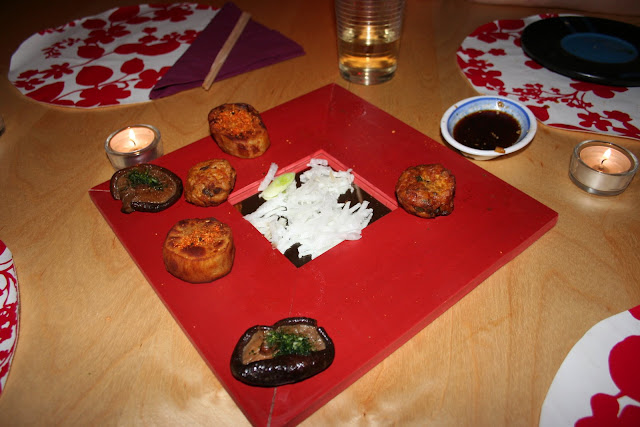 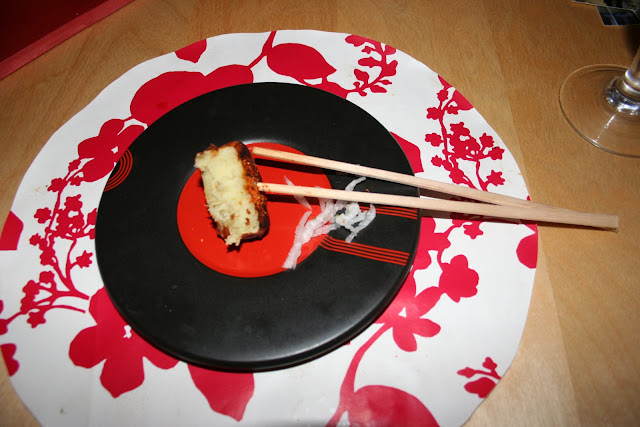 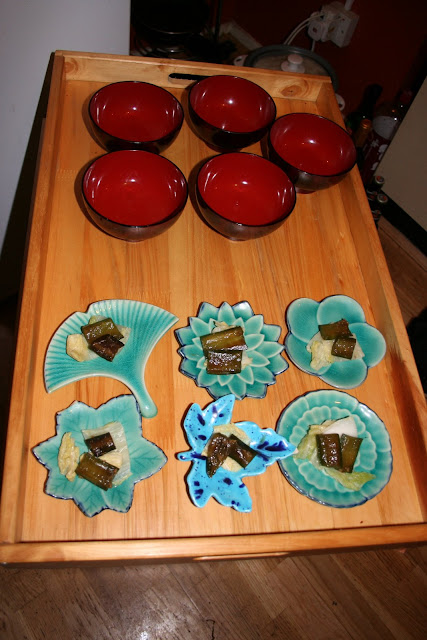 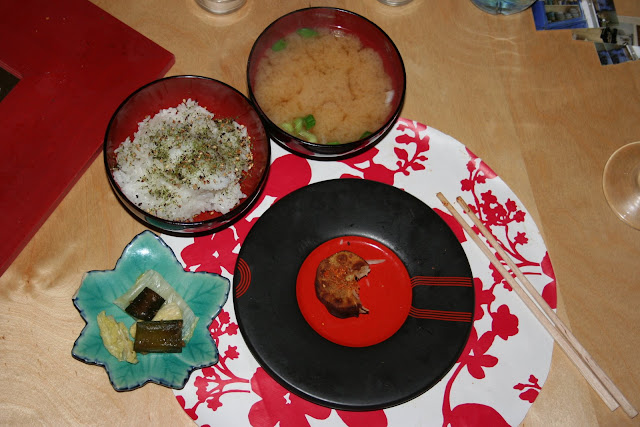 Miso is traditionally served at the end of a Japanese meal… 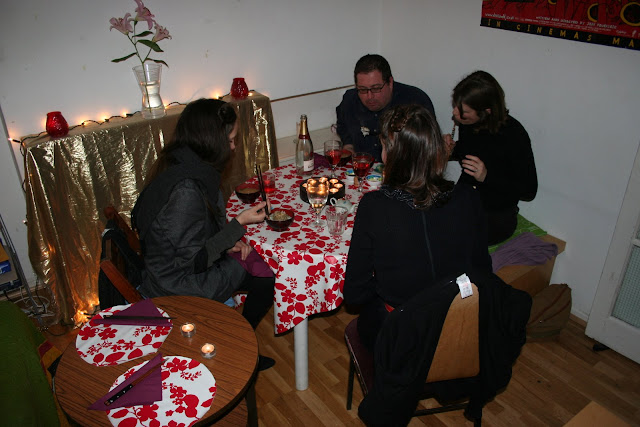 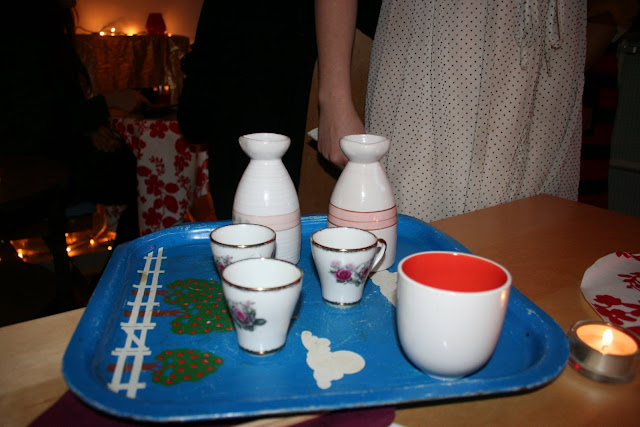 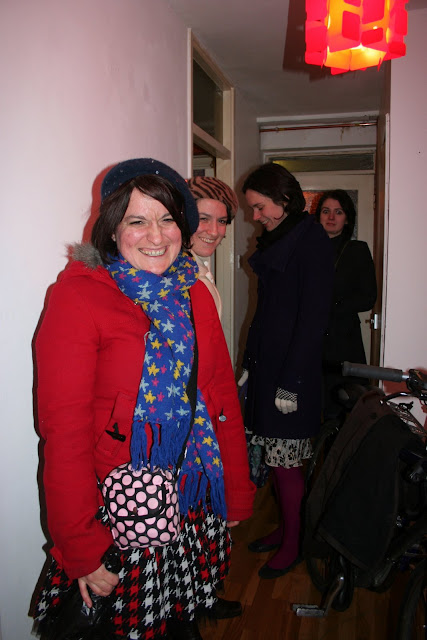 Waiting for the second sitting… 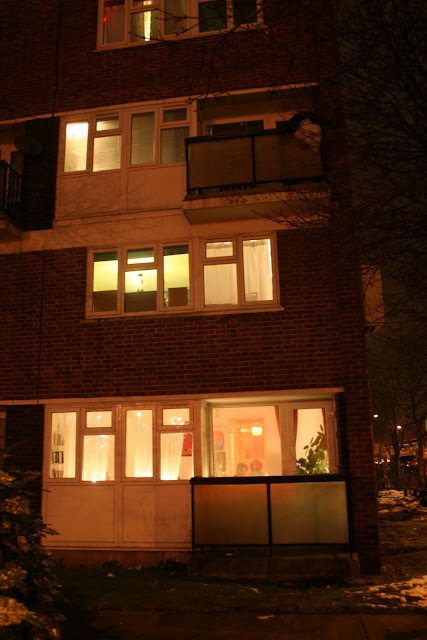 The original images…taken on my iphone… 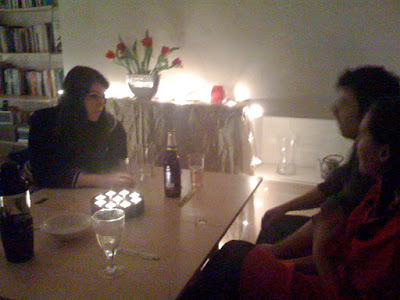 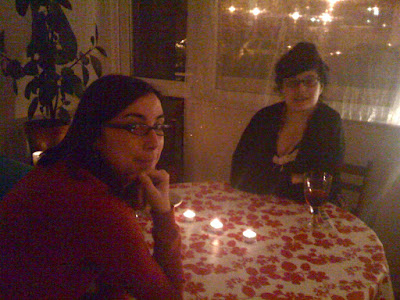 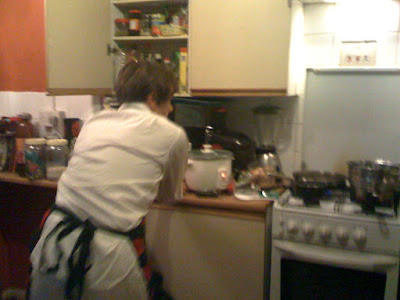 No, I’m not panicking! 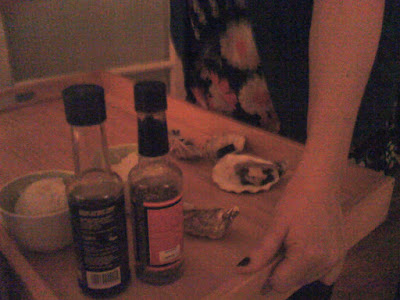 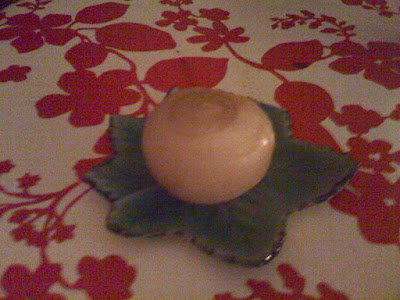 The onion, resplendent in it’s solitude. (It’s no longer on the menu) 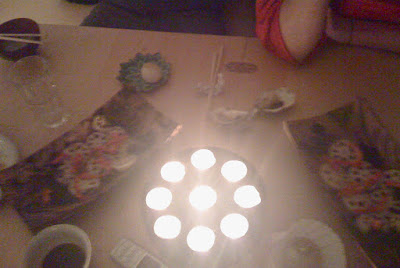 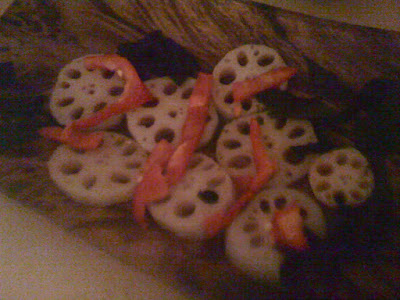 Lotus roots, glad I got a chance to try them.
Inspired by the ‘paladares‘ or home restaurants in Cuba, Horton Jupiter opened his own home restaurant ‘The Secret Ingredient’ at his council flat in Newington Green, London. I must confess I have been thinking of doing this myself for about 5 years but it has taken Horton’s initiative to give me the courage to do it. Watch this space!
It seems to be a trend. A group I know in London are doing the same thing this month, this time with a Marie Antoinette dress code. As the credit crunch looms, people cannot afford to eat out, so what better weapon to offset the cost of home entertaining than charging your friends to come over and eat? Your friends will bring their friends, so, into the bargain, you meet new people. Horton charged £10 for a meal of about 8 courses with sake wine.
His living room had been turned into a 2 table dining room, with red and white decor, candles and mood music. Horton is in the avant-garde band ‘They came from the stars, I saw them…’ so even his choice of music adds interest.
As I entered I saw Horton, perspiring in chef’s whites, darting about in the kitchen, cupboards open, platters on every surface.
My fellow guests consisted of a lute maker who also refurbishes a Scottish castle; Ms Canal Explorer, always sparkling company; an anthropologist who investigates brands not tribes and two other delightful ladies who unfortunately I didn’t get a chance to speak to, but knowing Horton, they had to be cutting edge arty types.
The food was Asian in theme: miso soup (delicious), cabbage wrap sushi, interesting pickles served in oyster shells, rice, lotus roots, new potatoes in a rich tamari sauce, nicely seasoned Chinese mushrooms. The strangest item was a solitary large onion, one each, apparently a Japanese speciality, but which looked like one of those pickled onions in a jar that you get in fish n’ chip shops. (Horton asked for feedback on the food a few days later and had noted that the onion was left. Now how many restaurants do you get asking for your honest opinion?). Food was aplenty, we were all fair groaning with the amount we had eaten.
For dessert we made room for a strange waxy dessert, a mixture of salt and sweet bean paste. We then played by sticking our spoons onto the remainder of the mixture and lifting our plates with the spoons.
The dishes were stylishly presented on star, leaf or shell shaped dishes (we all had different plates) and we were served by Horton’s fragrant girlfriend Rachel, as silent and smiling as a geisha.
At the end, Horton, slightly pale, came out and flopped on the sofa. We all applauded. It was a magical, unusual evening, very enjoyable and had that individual touch.
Unlike my personal experience in Cuba of a ‘paladare’ home restaurant. Maybe I was unlucky but the food was poorly cooked, (despite pretending that the husband had fished it himself that morning, the clearly frozen langoustine was dry and tasteless), the children stood around looking resentful and the whole meal was over in 40 minutes. It was as if they couldn’t wait to get rid of us. Although I speak good Spanish, conversation was desultory and we had to argue about a bizarre surcharge at the end, which also spoiled the mood. Their goal in earning a few quid from tourists was a little too evident. But, I must say, in general Cuban food is pretty bland, even before the revolution.
Similarly there are ‘mothers’ restaurants in Bologna (link). Everybody knows that the best Italian food is at mama’s table, this project enables you to eat with an ordinary Italian family, experiencing regional traditional rustic food. As a stranger guest you become a “companion” (companion is derived from cum panis, which means “with whom I break the bread”). The cook, the mama is called a ‘cesarina’. Don’t you just love that? Like a female Cesar, you are in her domain!

Homefood says “we have affectionately named “Cesarine”, in praise of all the grandmothers, the carers, the aunts, that have enriched our childhoods and made them happy with tastes.”

Lastly there are Jim Haynes, an American ex-patriate, Sunday suppers in Paris, just the thing for that city, which can be so hard to penetrate if you are an outsider. He has been doing this for over 30 years. In the next few months I am going to visit them all.