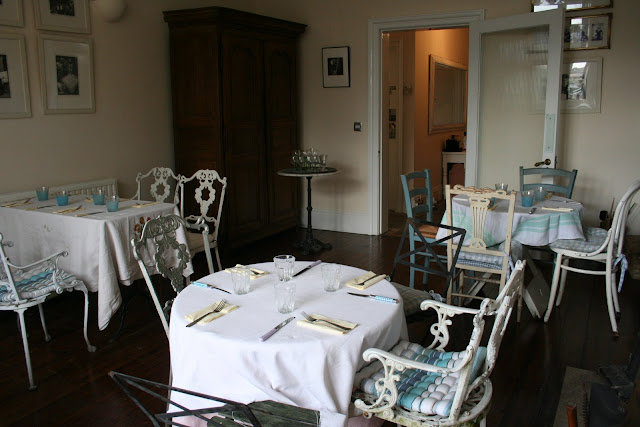 Mentally I started to prepare on Monday, planning my menu, visualising how many tables and chairs I would need.
Tuesday: I’d decided on my menu. Partly seasonal, based on what I get in my weekly organic box and partly just what I like to cook.
Wednesday: Cleaning my flat, the toilet, floors, tossing out old magazines, stocking up on loo paper, asking my neighbour if I could borrow chairs. Basically I spent the day on my hands and knees with a bottle of bleach.
Went to buy a new battery for my digital camera which had stopped working. Had to trawl Oxford street. Time running out.
Evening went to Horton Jupiter’s The Secret Ingredient home restaurant for the second time. Met Zoe Williams, Guardian writer, for dinner there. She is a new mother with an 18 month old toddler. We talked of our mum’s cooking. Her mother was apparently a terrible cook but rather experimental…

“she put cardamom in everything” grimaced Zoe.

Zoe is also the restaurant reviewer for the Telegraph.

“What a fantastic job!” I said enviously.

“Well it can be difficult thinking up new ways to describe the same old dishes” she replied.

She also divulged that eating in Michelin starred restaurants was not that different in terms of actual food to ordinary non-starred restaurants.
Made her promise to take me along with her if she ever needs a plus one for reviews.
The Guardian photographer didn’t turn up so I took the pictures. Lucky I had managed to find a new battery and charge up the camera.
Thursday: Got distracted chatting for 4 hours on facebook IM to a very witty and interesting man (and I’ve only ever seen a photo of his eye). Heart pounding at the end of the conversation. Romantic feelings for someone I have never met?
Focus.
So ended up cooking at midnight. Made vegetable stock from celery, carrots, onions, coriander seeds, bay leaf, garlic, olive oil. Left to reduce down for several hours on the simmering plate of my Aga. Fresh stock makes such a difference to flavour.
Made some chocolate mousses with ras-el-hanout. Put them in fridge to set.
Prepared oranges for candied orange. Sliced oranges thinly. Laid them in a thick bottomed pan. One cup of water and 3 cups of sugar. Simmered gently for hours.
Friday: checked chocolate mousses. Disgusting.

This was such a successful combination for raw chocolates. For chocolate mousses it was awful. Had to chuck the lot.

Laid out candied oranges to dry on racks in coolest Aga oven. Tasted one. Delicious.
Spent morning on phone sending photographs to the Guardian of Horton Jupiter’s restaurant. Dotmac email account suddenly not sending.
Look at time.
Haven’t done the shopping yet.
Rush out to Tesco’s rather than trawling through farmer’s markets which was original plan.
Spend £144 on food. £12 of which on an electric whisk as hand tired from last night’s failed chocolate mousse whisking.
Drive to Community Foods in Brent Cross and buy catering tub of kalamata olives. £12. 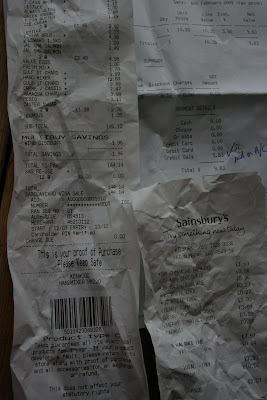 Sister-woman agrees to come over and help move furniture.
Teenager arriving back from France on Eurostar. I’m late. I drive fast to St. Pancras. A bus collides with me as I overtake. Fuck it, I think. I check the damage later. Minor scrape. Who cares? It’s London. Can’t be precious about that.
Drive home with teenager. I’m too stressed to be nice to her.
Sister-woman arrives.
She peels potatoes, tons of them. She then slices them thinly (but not thinly enough for me) and places them in cold water. I wish I had a robo-chef at home.
I remake chocolate mousses. They start to go wrong again. I’ve used 6 bars of chocolat Meunier. Lots of money. The chocolate mixture won’t fold into the egg whites.
At this point, dear readers, your normally bossy but calm chef has a total melt-down.

“I can’t do it. IT’S ALL GOING WRONG. WHY AM I DOING THIS?’ I  start to hyper-ventilate.

My sister starts to load the dishwasher.

“YOU ARE DOING THAT WRONG” I shout. She looks at me, clearly biting her tongue.

I try to breathe. I re stack the dishwasher. Sister-woman edges away from me.
Teenager, who I haven’t seen for a week, escapes to her bedroom with a glower.

I nod at sister-woman and say “Make me a margarita cocktail.” 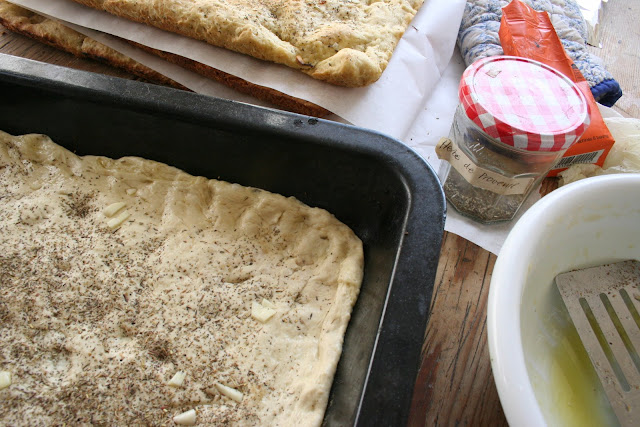 I start to make the dough for my focaccia. I figure I’ll make some beforehand to ferment it a little. Then add the fermented dough into the rest of the mixture later.

I make two large trays of focaccia.
Sister-woman says “that’s not enough”.
I make two more trays.
I roast the cherry tomatoes and the garlic. They are out of season so they cost.
I then remove the blackened skins which takes hours.
I mix the roasted tomatoes, squeeze out the roasted garlic, add it to my vegetable stock and whizz it up in the blender. It tastes amazing. Phew. Something is working. 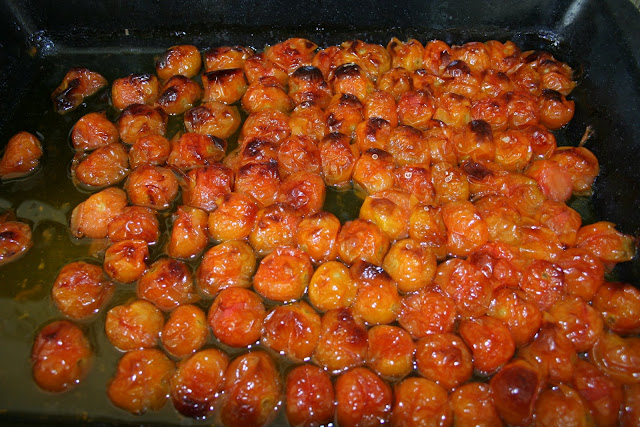 I then check the candied orange slices. They are burnt. Black. I throw them in the bin. Trouble with an Aga is, it’s so silent, you forget anything is in there.
I start again. Cooking them in sugar.
I am cooking until 3 am. 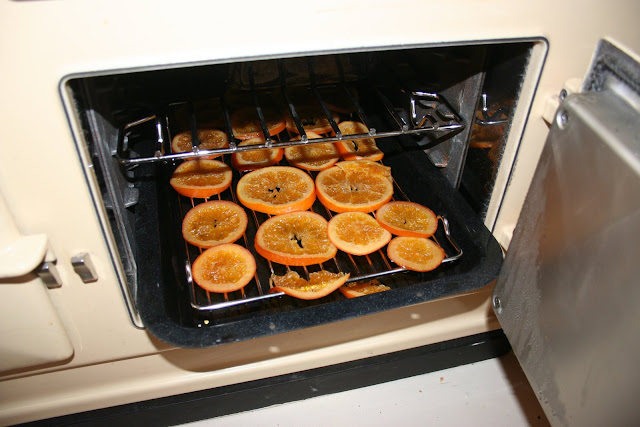 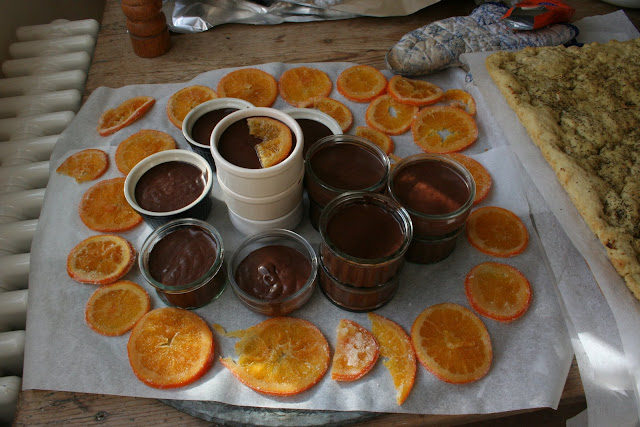 Saturday:
I wake about 9am.
Sister-woman and teenager want breakfast. This irritates me. I never eat when I cook. I am dimly aware that my irritation is totally unreasonable. Of course they have to eat.
Then sis and I drag tables from the garden and hose off the spider webs and dirt. Same for the garden chairs.
We move one of the sofas and my daughter’s drum kit into my bedroom.
My bedroom, formally a romantic and sexy lair, looks like a car boot sale.
But, having placed the tables and chairs in the sitting room, I start to relax, even start to have fun.
Sister-woman and I lay the table cloths. She irons them, cleans the silver cutlery. It’s starting to look like a French bistro. We giggle. We are playing ‘houses’ again as in childhood, but this time we play ‘restaurants’.
Finally a feeling of excited anticipation rather than dread. 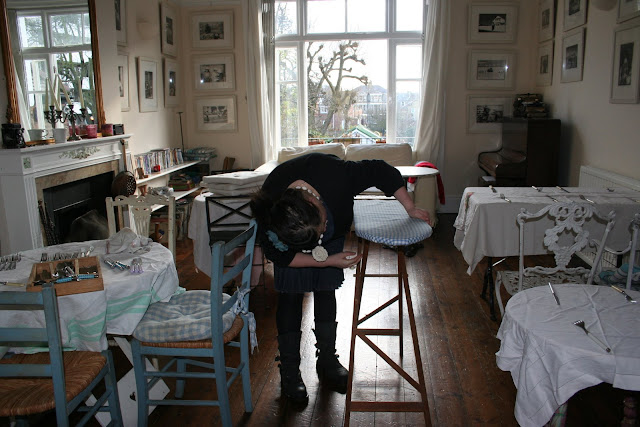 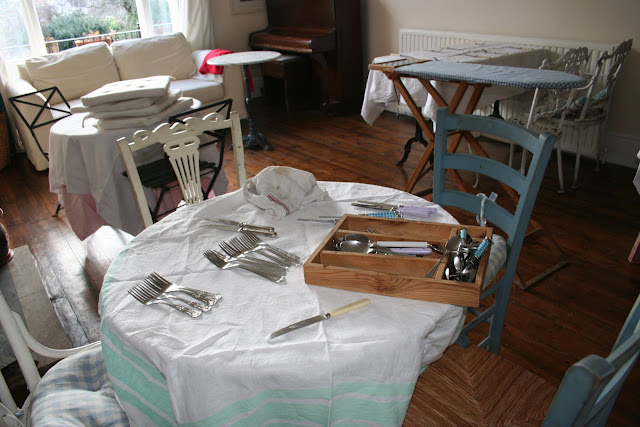 She comes back with the wrong chocolate.

I shout at her “How can you be my child and not buy the right chocolate!?”.

I start to make up the gratins. The potato slices have become weirdly stiff and curly. I can hardly lay them flat in the dishes.
Another melt-down. I hate my sister for cutting them up last night. I scream at the slices of potato.
I go into the living room. It looks lovely, all pale and candlelit with my black and white travel photos framed on the walls.
I return to the kitchen.
The new orange slices are finally dried.
My sister goes home. I don’t know if she will be back.
It’s 5 p.m and I am still in my nightie. With trainers on from going into the garden. As my friend says “It’s a strong look”.
I make a supreme effort of self-control, knowing I still have the celeriac and carrots to grate (by hand) and the dressing to make. I go take a shower, wash my hair, put on a black dress. My one nod to glamour…high patent wedges and false eye-lashes. Under my big white apron.
I grate the two large celeriacs. They make such an enormous amount of salad, I know I will have enough for a week.
I wash the green lettuces. I ask my teenager to make the dressing. It’s good. She uses the wrong mustard but it’s good.
At 7.30pm precisely the door bell goes.