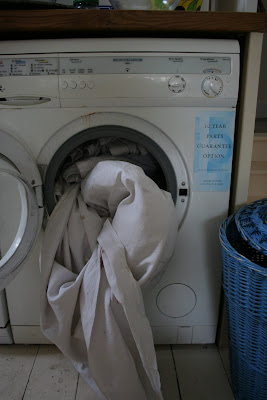 Laundry, clearing tables, recycling bottles, cleaning up.
I now have a permanent restaurant in my living room!
The Guardian article has led to further interest and many bookings.
My daughter got teased gently at school by teachers who saw her photo in the Guardian. They asked if they could come to the restaurant. I’m fine with that but my teen is horrified by the idea.
One blogger put my full home address on his blog. Spent Monday flipping out about that. Er…it is an underground restaurant. It’s like telling the police about an illegal rave. He’s taken it down now.
I have installed a pre-donate system with Paypal to avoid the problem of ‘no shows’. Every normal restaurant gets ‘no shows’. But an underground restaurant has no walk-in traffic. Profit margins are non-existent therefore if people don’t come, not only would I have to live off their uneaten food for the following week but I also lose money which could threaten the future existence of this project.
But it’s not working too well. Paypal only has robots. Even their humans, which it takes hours on the phone to get through to, sound like robots. Stephen Hawking-type proto-American voices saying ‘mam’.
I’ll stick with Paypal a little bit longer but the work and frustration associated with it makes me want to rip my own fingernails out.
If you want to book the Paypal address is

not undergroundrestaurant without ‘the’
or googlemail
All payments to the paypal account are going to fund a long lusted after Kitchenaid mixer… and then if I’m lucky, a robot coupé.
The aims of this project are humble. I and my friends wish to:
How’s that sound?