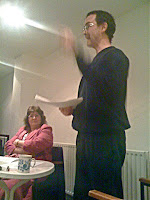 Astrologer Maggie Hyde in conjunction with potter/astrologer Jack Kenny who has been following the financial markets for years, gave a fascinating yet terrifying talk last night at The Company of Astrologers in Hampstead.

I came in to the packed room just as Jack Kenny was talking about the 9.5 trillion dollar bailout that the US has given to the banks. He was trying to give some kind of indication of just how bad things are…I took notes and Tweeted the talk.

“The dollar is up but everything else is suffering. Confidence in money is beginning to slip. A European holiday is 40% more expensive this year than last. The government is spending more, trying to reflate the economy but with unreasonable credit.
“The kroner is massively devalued. The news has been bad for 18 months now. The September to December period last year will be known in 100 years as the ‘panic of ’08’. The last banking crisis on this scale was not 1929 but 1907…
Counter-trend rallies are very violent. Everyone buying stocks and houses…
House prices have dropped 25% in the U.S. They will bottom out at 75% of their peak value. Start to recover in 2020.
Stock prices will drop to 90% of former value, some have already dropped that far.
Unemployment will peak at 30% by 2017. It will shoot up dramatically. But the stock market will start to rise in 2012.
Western government bail outs…governments are merely taxpayers so they are merely bankrupting us.
No mature economy can devalue it’s currency to become wealthy.
A normal recession…things a bit out of balance…a stimulus package can bolster. This is not a recession. This is a generational positive clearing out.
Any government reaction to the contrary will delay the problem.
We owe 30 times the world GDP.
This nonsense of Brown going to see Obama and saying together we will solve the world’s problems…Brown knows the truth. He’s just delaying [the melt-down] which will make matters worse.
Quantitative easing is the only option…printing money. Inflation will hit 20 to 25%.”

Someone in the audience asks:”Will we be buying bread with wheelbarrows?”

Maggie Hyde takes over to show a few charts on the overhead projector. The charts she is working with include:

“Looking at the 1066 chart, it’s the Saturn return for the UK. A Jupiter/Saturn opposition is coming up. The UK is very Capricornian, with the Sun in Capricorn trine a Saturn/Jupiter conjunction.
The problems last autumn, there was no major signature in the charts. “

Jack interjects:”The British banking system was within 3 hours of total collapse. 100 billion dollars of foreign currency was being withdrawn from the UK. They were trying to slow down this exit. Lord Myners admitted this. (1)There were no funds.”

Maggie:”On the 14th of October we had the first of our Saturn returns, the second and third hits will be in March this week and in July.

“This year Jupiter/Neptune conjunction in Aquarius. Well, that’s got to be inflation, hyper-inflation. Jupiter equals bizarre fantastic growth. These conjunctions will occur on the 27th of May, July and December this year.
“The Saturn/Uranus opposition will happen five times. The first was on Obama’s election.
The Jupiter/Saturn opposition will happen three times starting May 23rd 2010 (this time in Virgo and Pisces). This combines with the Moon at 29º Pisces square Uranus at 28º of Sagittarius.
In mundane charts (political charts) the Moon represents the common people. You can only interpret these aspects as restlessness amongst the people.
But by August Saturnian principles (square Pluto on the Midheaven) will gain the upper hand (Saturn exalted in Libra, Jupiter in Aries weaker). “

Someone speaks from the audience:”Does this mean we will see revolt in Spring and government clampdown in the summer?”

Murmurs around the room. I think about Capricorn and authority. I think about Tiananmen square. I also think about when I travelled in South America 1989-90. Being in an Argentinian supermarket and hearing the announcement “from now on all our prices are double” as people rushed to the tills. Seeing shops crowded in Brazil on the 23rd of each month because that was when people got paid. If you waited any longer, your wages became worthless and you could not buy food. During this trip, I only ever changed $20 at a time. No point changing more, it was worth half the next day.

Maggie continues:”The events of the next three years are tied in with the Jupiter/Saturn cycle. But there is hope in 2010, a progressed Sun trine Jupiter in the US chart and Obama’s chart.
For Obama’s ‘first’ inauguration the Jupiter return is cazimi. Obama may be able to pull off some Jupiterian trick for the USA. Not the case for the UK though. Brown is the wrong leader for these times, he has no earth in his chart and a stellium in Pisces and Uranus will be on his Venus in April. You need a Leo leader which is what Obama is.”

Jack takes over with the financial hard stuff: “Money is harder to get hold of the UK. The pound is collapsing. The dollar is rising so in the US you have deflation.
“Toyota cut salaries today. You can’t have inflation if you have no money to spend. But the deflation phase will finish this year.
Food prices are up in supermarkets. Anything that requires credit will lose value.
Hyper-inflation is self-feeding. When normal inflation goes above 25% it spirals.
As governments behave irresponsibly our currency becomes worthless. Commodities such as food, paintings, gold become worthwhile.
All Western currencies will lose value.
Inflation, as interest rates rise, there will be problems selling government bonds. Quantitative easing won’t work and will lead to severe destruction in the stock and housing markets.
In 2012 Pluto will conjunct the UK Sun.”

“What about the Olympics?” I ask.

He continues:”The banks will be fully nationalised. Then when interest rates are high enough people will start saving, they will spend again. China is bailing out its economy from savings. “We are bailing out ours on credit.
“Taxes will go up. A quick way to raise taxes is on housing. You can’t run away from houses. Pensions will be severely affected.”

“Already have” retorts one older woman in the audience.

Jack: “Bank controls will come in.”

“What’s that?” asks an astrologer.

“The banks will limit access to your own money. They are already doing this in Eastern Europe. Banks will say ‘you can have £100 or £200 a day’.”

An audience member:”I remember in the 70s when you went abroad you were only allowed to take £30″. I remember this too.

“We will see more scams, Madoff type scams and draconian government measures to combat them which will limit freedoms. Pakistan has an on-going civil war, is a nuclear country and I think Russia will have to invade.
There will be protectionism. Brown is saying there won’t be so we know they are thinking about it. And a new concept ‘commodity chauvinism’…”

Baffled looks all around…

“That is when countries who have resources, who have stuff to sell, will refuse to. The UK only has banking and insurance service to sell. We are running out of oil.
“There is a story about a Roman legion who with an ounce of gold could buy a new suit of clothes. An ounce of gold is now worth approximately £700…in other words a new suit of clothes.
“Buying gold is not easy. It works on price rise and is priced in dollars. An ounce last August sold for £450. Today it’s £660 but with commission it is £718. If you had bought gold last August your money stayed safe.”

“So are you suggesting we keep lumps of gold in the house?” I ask.

Maggie:”Well I bought gold and yes they post it to you in a jiffy bag. Where to keep it is another problem”

Another lady complains: “Diamonds have devalued. And gold can go down.”

Sighs of dismay in the room. My father sent me an email saying “New Labour sold our gold at about $265 an ounce”.

Jack:”This year then, rallying markets, dollar down, inflation, silver will beat gold. Here is my advice for the future:

Buying silver is difficult in the UK because it’s VAT rated.
Paul Volker and Warren Buffet think life is terrible. They know.”

At the end of this talk people sat slumped, seemingly stunned in their chairs. I tried to talk to Jack Kenny afterwards but was interrupted by a woman who demanded to know what I had been doing with my iPhone. When I explained I had live tweeted the talk, she became agitated, suspicious.

“Why are you telling these people this? Do you know them? You are telling everyone our secrets. You are a spy.”

“Well this is part of my community” I tell her “I feel I should spread the word.”

“You are not being very Aquarian about this” I say.

In the pub afterwards I sit with my astro mates.

One says “What I don’t understand is if this guy is a financial wizard then how come he is not wearing a Saville row suit?”

“So you think he is being a bit of a doom merchant?” I ask.

People don’t want to believe him. Many astrologers are quite spiritual, and prefer to think positive. I’m not so sure. All I know is I have had more reactions from Twitter than ever before although some say:

Others said “I’m off to buy gun stocks and Uranium.”

One said “I heard from a government source that the UK will be locked in 2010. Nobody in, nobody out.”

How does that Chinese curse go?
“May you live in interesting times”.
(1) See also this bloggers view.