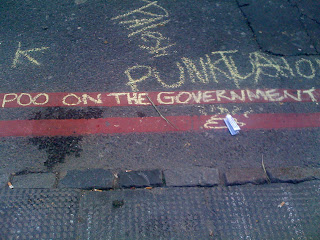 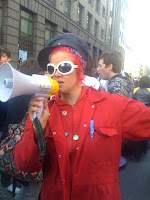 Vics telling ’em how it is. 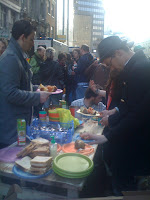 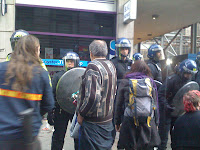 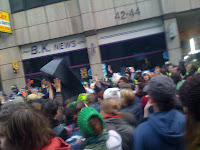 Trying to reason with the riot cops. Things kicking off. 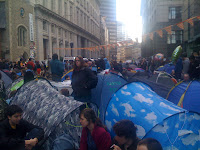 A sea of tents. 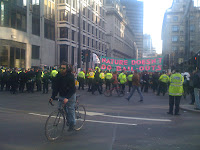 The entrance to the Climate Camp 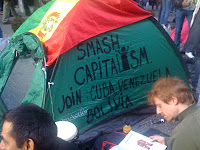 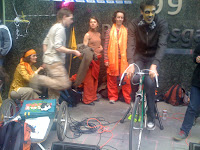 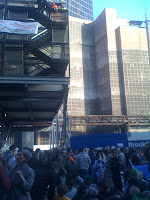 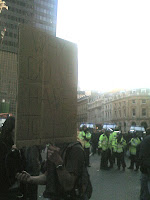 Workers above, looking down. ‘Why do we have to pay’ sign in front of line of riot cops. 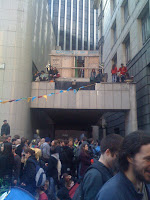 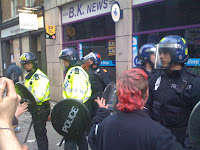 Trying to reason with the riot police. 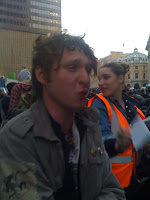 This kid was hit by truncheons, has bloody face.

Good vibes at the Climate Camp early on.

Yesterday I went down late to the G20 protests, missing the action at the Royal Bank of Scotland, to the Climate Camp pitched on Bishopsgate street near Liverpool Street Station. I’ve done one of these before a few years ago, when we all pitched tents in Trafalgar Square, to protest against the Iraq invasion. I remember it being very cold and noisy with local drunks constantly harassing us.

Coming out of Liverpool St. station I noticed several very clean-cut looking men with suspiciously casual clothes. Bankers were advised to dress down for the day in case they got set upon by protestors. At the same time protestors were told to ‘dress like a banker for a day’. All very Saturnalia, the Roman festival where the masters dressed as slaves and served them for a day.
Climate Camp had taken over a whole block, with maybe a hundred pop-up tents, each spray-painted with slogans. There was a kitchen, baked potatoes with baked beans for a suggested donation of £1.50p, and a compost toilet.
My friend Chris Knight, University of East London professor and Radical Anthropologists guru (see link in sidebar) had already left, hoping to galvanise people to descend upon the university campus to protest his suspension. He’d made a few inflammatory remarks on radio “hanging bankers from lamposts”. I’m amazed that they suspended him. He’s been fermenting revolution in his classes for years. It’s not exactly news. An alternative summit was supposed to happen at UEL but the university was shut down for two days. I’m also surprised that Barking Bateria, the UEL samba band has not protested more strongly at this.
Chris’ colleague Steve, just back from studying chimps in the Congo, was at Climate Camp.

“What’s going to happen about Chris?” I asked.

“I think the university will quietly drop the whole thing once this protest is over. Chris is a chapel leader. They won’t want the hassle. But it must be said that anthropology (Chris’ dept) has only nine students this year. There used to be a hundred. It’s become too expensive to study any ‘non-essential’ subjects now. All the students want to study business.”(1)

I found the samba band, RoR, decked in their usual colours of pink and silver. Ms Canal Explorer had been outside the Royal Bank of Scotland when it was smashed and admitted that the samba band was in some way a catalyst for the protestors at that point. Ms CE and myself are both Space Hijackers (myself less frequently). They’d all been arrested outside News International with their tank ‘disguised’ as a riot squad van. (Facebook group: Free the SPA)

They are now bailed away from the Westminster/City/Newham area for a week as they refused to take a caution.
The camp was peaceful with a party atmosphere. Student types were sitting around drinking beer. Some workers were looking down from the tall buildings surrounding us. (There were reports of bankers waving tenners at protestors). A bicycle powered sound system was cranked up. Rythms of Resistance were backing a ‘grime’ vocalist called riddum when the call went out to strengthen the southern perimeter of the camp. Riot police vans were parked all down the side of the camp and they had been picking off protestors (probably ones they recognised from the earlier fracas at RBS) and arresting them. We stopped playing and moved down the other end. I could see hundreds of protestors with their hands up chanting

A young man had blood down his face.

“I was just standing there when a policeman started hitting me with his baton”.

Film by Rikki Blue, friend of mine. Don’t believe the mainstream press.
Suddenly a row of riot police were closing in all around the camp. Somebody texted that fires were being started around the City, that sporadic rioting was occurring elsewhere. Protestors were standing eye to eye with the riot police, hands up in a peaceful gesture, asking for explanations of their behaviour. The samba band started to play again. This strengthened the mood. I’ve said it before but I’ll repeat it. The drumming is a powerful weapon. The samba band is key to controlling the crowd. We can push it forward, rile it up, calm it down. (I’m not always sure that the samba band are aware of their own power, that at times the fact that they keep playing can prolong a situation such as outside the Israeli embassy (link to story) which would have fizzled out naturally.)
Excellent video reportage by SuperSan, a member of Barking and RoR.
I twittered everything  best as I could. There was another twitterer@climatecamp, but whose tweets seemed to be all about how happy/organised the camp was.
One guy started fitting on the ground. Later a man was reported to have died, stopped breathing in a police van. I wondered if it was the same guy. In a Guardian report police claimed that protestors prevented medics from helping him. There is no way this could be true. Who do people think protestors are? One twitterer whose husband works in the city was worried that he might get beaten up. Protestors are generally incredibly idealistic and peace-loving. Who else would spend hours of free time trying to make a statement, most likely with no result?
Around 9pm I went to the North perimeter to try to get out. A line of riot police were resolute. Nobody was leaving. Which is odd because the police were happy to let people walk into the Climate Camp in the first place. I talked to a Scottish policeman who explained that it was kicking off elsewhere. So we were ‘kettled’ in a Section 41 because the police were afraid the protestors here would link up with other protests. Eventually I sweet talked him into letting me out. Ms CE tried to get out a little later by saying she had her period. It didn’t work. As I walked towards the tube I saw tattered news stand posters moving in the breeze “Obama’s big day ruined by violence”. I spoke to the news stand guy.

“It’s pointless all this. The MP’s can claim 40 grand expenses for second homes. The government can do what they want. We can’t. Nothing is going to change”.

And there we have it. Frustration and impotence. Anger and disgust. One set of rules for them, another for us.

(1) I have since heard that Chris Knight did go to UEL, with Tony Benn MP and continue the alternative summit.
NB: As we all know, the MP’s expenses story blew up in their faces in May ’09. This is a seismic change. I get the feeling that the British, for once, feel revolutionary. It won’t take much more to spark them off.
Also Chris Knight is now fighting to keep his job at the University of East London.