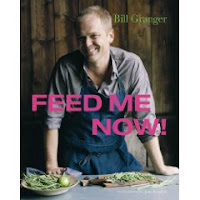 A rare opportunity to see the top of Bill Granger’s head in this cover shot.
I first noticed Bill Granger channel flipping. I saw this Australian bloke making muesli in his oven. Thick I might be but it had never occurred to me that I could make my own muesli before that. I was gripped by how easy he made it all look.
An Australian friend told me Bill Granger just started with a little shack by the beach, a couple of tables, cooking breakfast. The good word spread …
His book ‘Feed me now’ is geared towards working families wanting to make fresh healthy dishes which don’t take too long to prepare when you’ve got in from work and you are so knackered all you want to do is reach for the deep freeze and bung a few fish fingers in the oven. Or boil a kettle and give the kids Pot Noodles even. (It’s not unknown in my house, lemme tell ya. My only defense is that I will put a few spring onions on top, a few slices of tofu, fresh coriander leaves and a squeeze of lime).
After ripping out all the boring meat pages I got stuck in. Breakfast remains a speciality, with muesli and hot cake recipes.
One thing I did notice is that many of his photographs crop the top of his head out. I think it’s because Bill is thinning a little on top. I don’t blame him. When I have a book out, I expect some heavy photo-shopping believe me!
But really, what’s wrong with baldness? I think Bill should take a leaf out of fellow antipodean Clive James’ book and be an ‘own-up baldie’.
The photographs are beautifully shot and nicely styled although quite girly for a male chef, with Cath Kidston type fabrics and Bill in a pale pink T-shirt.
But you do get to see Bill Granger cooking. I looked at a recent book by Gordon Ramsey. Ramsey is never even photographed in the same room as the food, let alone cooking it. I got the feeling that he had just put his name to a recipe book and had little to do with devising the recipes. There were all these beef-cake shots of Ramsey grinning, ruffling his hands through his hair, looking off-camera, pseudo-casual, leaning against a fence. The publishers clearly think he’s some kind of model from GQ mag.
Back to Bill… reading this book I really think his easy style works best on TV. The prose is a bit vacuous and heavy on the ‘I live a perfect lifestyle in my gorgeous kitchen with my Boden catalogue family and we all spend our whole time smiling winsomely’ shtick. Nice to have a little grit with your oysters…
I like the fact that he’s a domestic cook. That ‘do-ability’ shines through in his recipes. You feel anybody could have a go at ‘miso fish’ and his version of ‘tiramisu’. I’m not sure about the ‘pumpkin and grape’ salad. I don’t really hold with fruit in savoury salads ever since I slavishly followed a Waitrose (one of those free cards) peach and feta salad recipe and it was fucking awful.
The book is published by Quadrille and costs about a tenner. http://www.amazon.co.uk/Feed-Me-Now-Bill-Granger/dp/1844007065