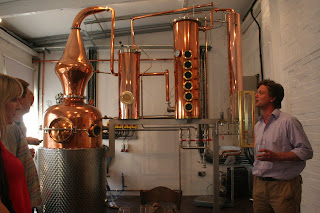 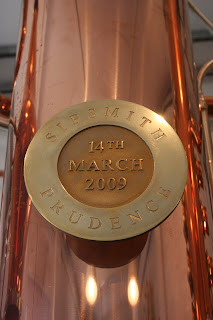 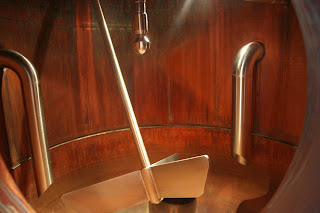 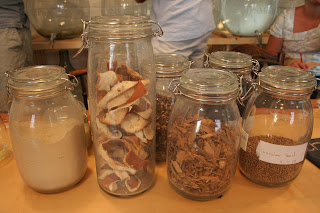 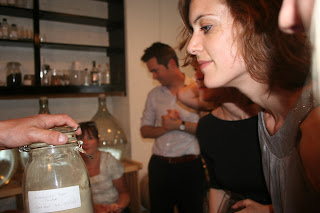 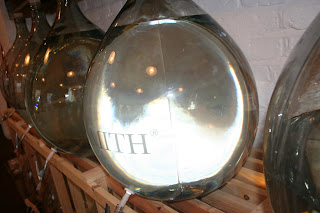 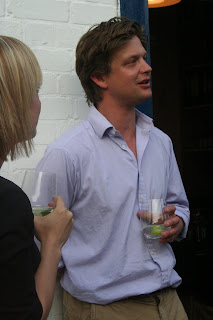 Sam, looking like a model from GQ magazine, sipping on a G & T on this hot summer’s night.
Emile Zola knew the attractions of a copper alambic, an intestinal boiler for distilling alcohol. Copper, of course, has alchemical properties. Venus, the planet of romantic love, sugar, perfume and dimples, rules copper (1). The alambic at Sipsmith brewery is named Prudence; after Sam Sipsmith’s mother, a judicious warning about the enticingly corruptive influence of alcohol or the Beatles song?
Sipsmith applied for the first distiller’s license in London for 190 years.(2) They make London Dry Gin and Vodka.
London Dry Gin is an appellation, with a minimum of 55% Juniper, distinct from the Dutch Ginever (sweetened with copious amounts of liquorice to cover the roughness of the alcohol) and plain Gin.
London Dry Gin uses a mix of botanicals; Coriander seeds (we were encouraged to crush them in our palms, smell the tropical pineappley aroma, I must have been over-enthusiastic as I found several seeds later that night in my bra), Angelica, Juniper, Liquorice, Seville Orange peel, Lemon peel, crushed Almonds, Cinnamon, Cassia bark and Oris root from Irises.
The Sipsmith team, Fairfax, Jared (apparently the author not only of several books on alcohol but also on astrology) and Sam, researched artisanal spirits in the United States. The emphasis there is on the hand-made, almost intuitive process of distilling. Sam explained

“It’s not a science, we are loading the still by hand”.

He talked of adding the botanicals one by one, using their noses to sniff the ‘spirit safe’ and as one smell fades, adding another spice.
Sam was reluctant to say how much Prudence, custom built by a German family firm and taking nine months, cost: “between 100k and 250k“.
The Gin is made from the second cut of the Vodka, a 40% ‘cut’, an aggressive ‘heart’ cut which “keeps the butteryness” according to Sam.
I tasted the vodka. To be fair, I rarely drink straight spirits but the aroma hurtling up from my glass was enough to stun me; more reminiscent of glue-sniffing or a wound-swabbing surgeon than Seabreeze girly cocktail.

You bet. I think I’m too much of a wuss for one shot distillation.

The Gin was easier on the palate, lemony and fragrant, particularly good with Fevertree Tonic that unlike Schweppes, still contains Quinine which would make it popular with old Africa hands, embibing it as an anti-malarial.
(1) From Wikipedia: Copper was associated with the goddess Aphrodite/Venus in mythology and alchemy, owing to its lustrous beauty, its ancient use in producing mirrors, and its association with Cyprus, which was sacred to the goddess. In astrology, alchemy the seven heavenly bodies known to the ancients were associated with seven metals also known in antiquity, and Venus was assigned to copper.
(2) The last distillers licence to be awarded in London was to Beafeater Gin in 1820.