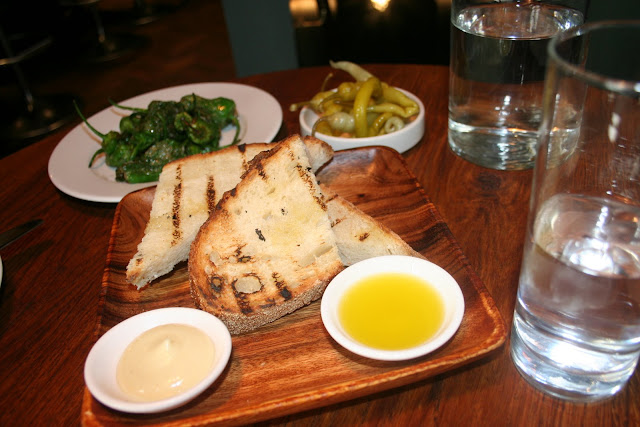 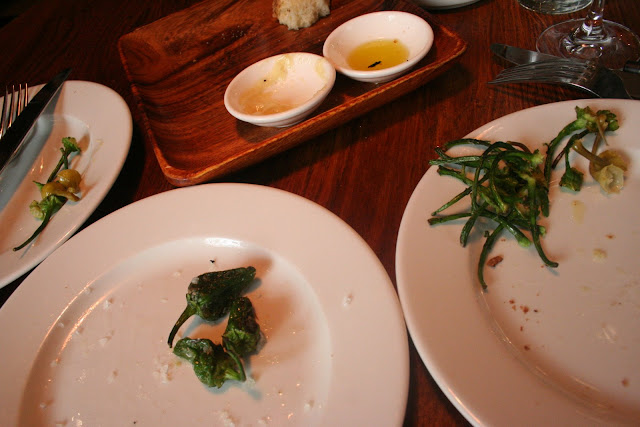 Coughs, on the left, Les’ plate, on the right mine. 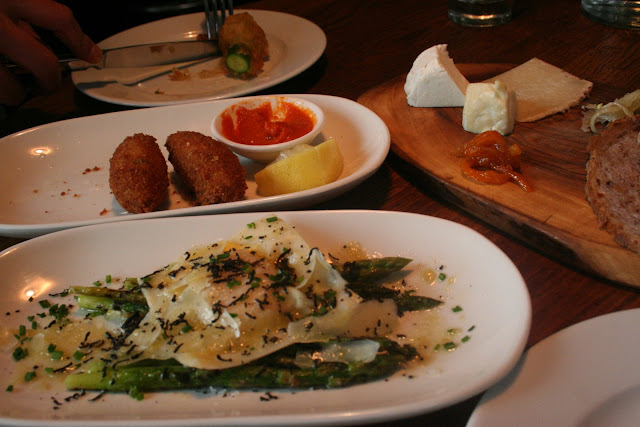 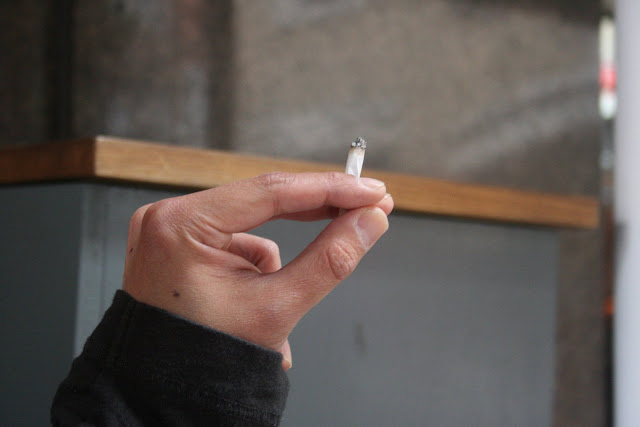 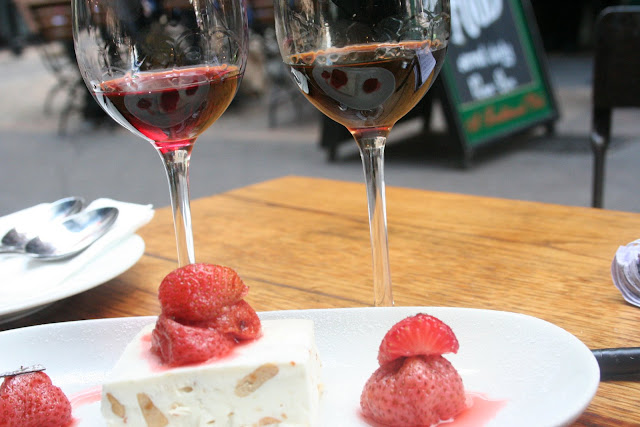 The ‘rosa’ sherry on the left, the Christmas pudding sherry on the right. Slightly drunken shot of the turron icecream with strawberries in the foreground.

Is there anything nicer than a three hour lunch on a sunny Sunday afternoon? Body aching from my travails at The Underground Restaurant the previous night, I took the tube to Oxford Circus, walked past Carnaby Street, where they had a live band playing and took a table inside Spanish restaurant Dehesa.

I was meeting my fellow food blogger Fat Les. He’s been a few times to this restaurant, rates it and thought I should try it.
I was supposed to go there last September on an Internet date. Met said guy outside, my heart sank as soon as I saw him in the flesh, he was wearing a Carphone warehouse exec suit, but I thought ‘give him a chance maybe we will get on’.

“Dehesa’s full and I don’t want to wait” he announced.

In the pub, once we were sat down and exchanged a bit of chit-chat, I asked…

“So… what are you interested in? What do you do in your spare time?”.

“Well I like watching sport on TV and playing golf”

I waited. For the rest. You see, I’d put in a long list of interests…lemme find it….ok this is just a fraction of what I wrote on my profile.
“Likes films: some of them include: Apocalypse now, School of Rock, Eric Rohmer, Truffaut, Night of the Hunter, Seventh Seal, Gone with the Wind, The Decalogue, Meet Me in St. Louis, Lawrence of Arabia, Goodfellas, Some like it hot, Sweet Smell of Success,Taxi driver, Tokyo Story (love Ozu), A Clockwork orange, The Departed, The Wizard of Oz, Gladiator, The Sixth Sense, Les Jeux Interdits, Wings of Desire, Powell and Pressburger, Cabaret, Bob Fosse, Withnail and I, Liquid Sky, The House of Games (love Mamet), anything by Mike Leigh, The Others…

Likes books: too many to mention.

I’m looking for a good looking sexy cultured man between 5’5″ and 6′ tall. Preferably with blue/green eyes. With a dry sense of humour. Kind. Honest. Who is also looking for a long term relationship. Who probably has liberal politics and is agnostic or atheist but open to the ‘subtle forces’… A non smoker preferably…”

You get the picture?
Conversation having ground to a halt. Feeling actually irritated that I’d squeezed myself into a nice dress, high heels, make-up and a tube journey for this, I was a little rude.

“You read my profile right?”

“Did I give any hint even of a liking for golf?

There was a pause. He said, slightly pleading…

“It’s just that no women are interested in sport. So if I based my choices on that, well, I wouldn’t ever get a date”.

I sighed. We went to the Thai restaurant next to Dehesa, which was ok but nothing more. Sorry can’t stop bitching here but it really annoyed me that while we were waiting for our table he said:

“Yes. I’m a cook. I love cooking. I love travelling and eating foreign foods. It was all in my profile” I replied slightly testily.

Softening a little, I asked

“Um I’m a bit nervous about it. Can you do the ordering? I don’t know anything about Thai food.”

Which I did. He liked the stuff I ordered. We got through the evening. He was a nice man. I turned the conversation to what interested him. Actually I can pretty much talk about anything. Even golf. After, at goodbye, “stay in touch” I said airily, not meaning it. He understood. 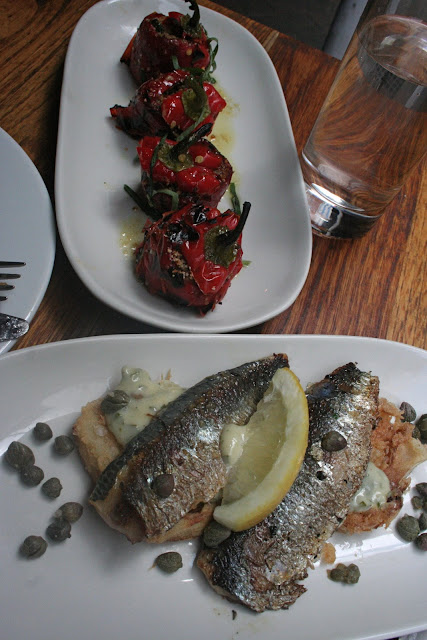 Baby stuffed peppers, so sweet and grilled fish.
So finally at Dehesa with Fat Les who is charming, cultivated and intelligent. He did the ordering. Oh it’s so lovely when a man knows about food. I do get a bit sick of being a food dominatrix.
We kicked off with Padron peppers. Fucking hell. They were good. So simple… brushed with oil, laid on the charcoal grill, sprinkled with Maldon salt. Some were sweet, some were spicy. I loved them all. I ate most of them.
I ordered Guindillas which were a bit like the pickled peppers you get in kebabs. I’m a pickle queen admittedly but this dish was not the most extraordinary thing so skip that.
Chargrilled country style bread with little dishes of aioli and olive oil. The bread was wonderful, blackened stripes on it, a bit like Aga toast. The olive oil was stringent and intense. Love aioli, this one was quite subtle on the garlic front.
One of the things I really liked about Dehesa was the knowledge of the manageress/head waitress about wine matching. I decided to work my way through their list of sherrys. I did this solo as Fat Les doesn’t drink. Which explains why my photos towards the end of the meal were a bit wonky.
I chose the Olorosa Seco, Almacenista sherry, dark and nutty, but realised it would be better matched with something else. The manageress offered me a glass of something more appropriate, Manzanilla Pasada, Pastrana, Hidalgo, an unusual single vineyard sherry, without asking. The service was excellent; friendly, knowledgeable and flexible.
Sherry does have a bad rep, Bristol Cream, a drink for old ladies. I’ve taken the train to Jerez, past Sevilla, one of the world’s most beautiful cities. It’s an interesting area of Spain and a much maligned drink. I drank sherry throughout this meal.
For ‘mains’ (although the dishes are all tapas or racion portions) we had a trio of goat cheeses with some fine slices of walnut bread, a marmalade and a little pickled fennel, which went perfectly with the Olorosa Seco.
We also had the courgette flowers fried in batter, the flower stuffed with Monte Enebro cheese and the plate drizzled with honey. Exquisite but expensive for just two at £7.25. But they are not quite in season yet so I guess they are paying over the odds to get hold of them.
There were Spanish classics, tortilla and patatas fritas, but we went for Grilled English Asparagus with Egg Yolk Ravioli truffle and parmesan. The ravioli holding the egg yolk was clever and delicate. The truffle shavings were generously sprinkled and the asparagus young and spindly.
The Salt Cod Croquetas with Romanesco sauce were good, crispy breadcrumbs on the outside, soft fish on the inside with a red pepper sauce. This was classic tapas bar style fare but very well done.
On the menu was Aubergine Parmigiana which I’d had an overload of the night before but must return and check it out.
Still hungry. A table came free outside and we asked if we could move. The music inside, some of it good, Maria Bethania’s reedy Brazilian jazz-tinged voice, was a bit loud for a proper conversation.
So…we chose the Roasted Baby Peppers stuffed with Spring Vegetable Pistou and pinenuts and the Chargrilled Mackerel with Crispy Fennel and Caper Mayonnaise.

The baby peppers were cutely presented, little red hats topping the filling which could have been stronger or maybe my tastebuds were becoming a little inured. The Mackerel seemed to be sardines? No matter, slurped up the caper mayonnaise.
After seeing The End of the Line, note to self: only order small fish such as herring, mackerel, anchovies or sardines.
I was offered a glass of pink wine which matched perfectly. It brought back memories of balancing chairs next to precarious tables in slanting hill side alleyways in Lisbon, eating grilled sardines garnished with fresh mint, swigging back vinho verde, that green young resinous wine that goes wonderfully with oily fish and a hot day.
For dessert I ordered the Turron Parfait with poached strawberries. The manageress again offered me a delicious pink Moscato rosa sherry to match the strawberries, I also chose the Pedro Ximenez sherry. This dark brown mahogany sherry is like liquid Christmas pudding. In fact you don’t even need dessert with this. It’s almost fig-like, with coffee liqueur notes…
I adore Turron, in icecream or plain or in Toblerone chocolate. This ice was creamy, the nuts subtle. Turron is an important foodstuff in Spain, shop windows are piled high with rice-paper covered cakes…some with almonds, some with hazelnuts. Some Turron is chewy inside, others are hard.
In France of course it is called nougat, pronounced [noogah]. The Holloway pronounciation via my dad is ‘nugget’ reminiscent of gold, appropriate for the caramelised honey flavour and also the sense of discovery when you bite upon a nut.
The centre for nougat in France is Montelimar, a place I have driven through many times, the petrol station stuffed with bars for sale. But some French makers critisize Montelimar nougat for not having a high enough nut content.
Dehesa does make you feel as if you are in Spain, especially when London has a rare sunny day and you can dine al fresco. It’s also proof that even vegetarians will find plenty to eat at this place which specialises in charcuterie. I would like to try their sister restaurant Salt Yard in Goodge St about which I have also heard good things.
Here is Les’ review of our marathon lunch. 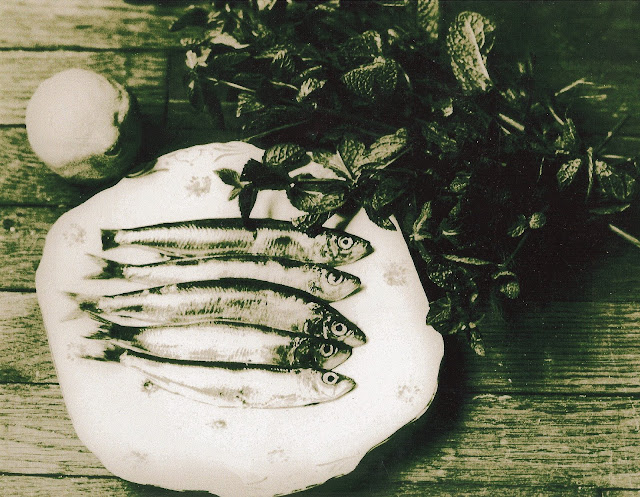