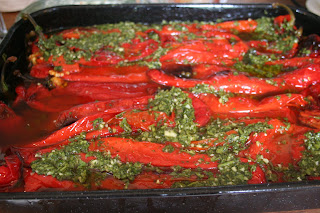 Marinating the peppers in parsley and garlic 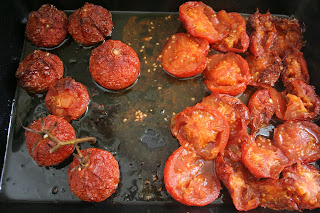 ‘Sun dried tomatoes’ in reality simmered for 24 hours in the Aga. This is about half way through cooking, the ones on the left are more what they ended up like. They were very intense in flavour. 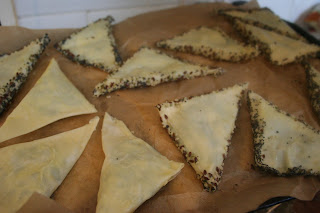 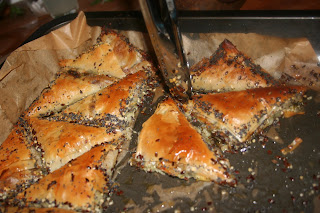 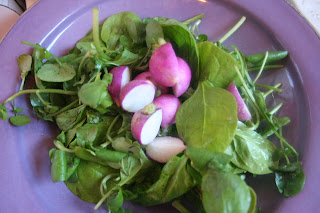 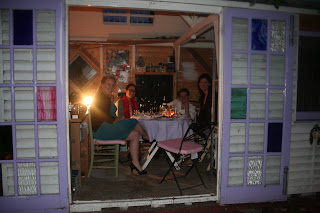 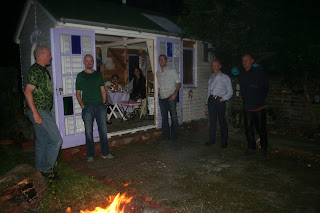 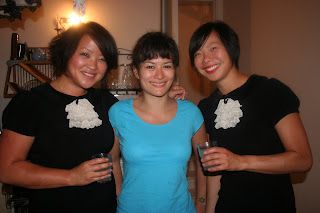 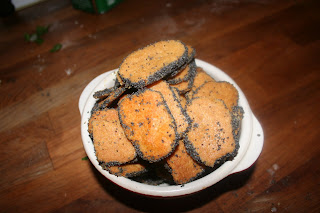 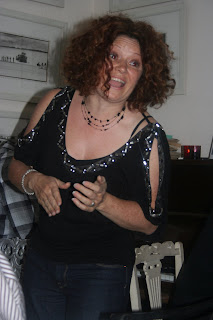 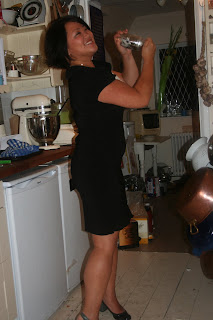 As Lizzie came in, I barely greeted her before putting her to work, saying tightly “I’ll be nice again in three hours”. Last night I had the most diners ever, 42! I spent Friday shopping for furniture rather than prepping. Hence my tension on Saturday afternoon.

Bellaphon, dear man, came over Friday night to put together some of the furniture and help me clear the summerhouse at the bottom of the garden. I now have a honeymooners suite. At the moment it’s a table that seats five, but it could be hired for a private date. The summerhouse was built almost entirely from recycled materials, retrieved from skips. It has a bed, a wood burner, electricity, a phone line…
We also got the bonfire going last night, although the fire was so fierce at one point I think people got a little worried. I’m the firestarter, twisted firestarter…
In Les Voges in France, a bonfire for ‘la fete de la Saint-Jean’ (St John’s eve traditionally held on the 24th of June) is called a ‘chavande’.
I was so busy I didn’t have time to write out menus, so each dish was a complete surprise for guests. Encouraged by Angie, MsDumpling, who helped me prep, I did a couple of little post meal talks, one in the living room and one by the summerhouse, describing each of the dishes.
Angie makes a wicked daiquiri, without a doubt one of the best cocktails I have drunk. In fact we stayed late into the night drinking more until I realised I was getting the famous ‘black whirlies’ and keeled over into bed.
Her friend Audrey, as elegant as her namesake Audrey Hepburn, came to do front of house and retained her cool and an unsmudged red lipsticked smile throughout.
I also had one very large group, from Mrs Coot’s ‘meetup’ group, Mrs Coot’s Quirky Outings. Mrs Coot who is in reality singer Anita Kelsey, gave us a couple of bluesy songs last night with piano accompaniment. Next week I think they are going for a picnic in a cemetery.
The Menu
Fresh lime Daiquiris
My marinated olives
Freshly fried padron peppers in olive oil
Marinated red peppers topped by flamed mozzarella
Dolmades stuffed with preserved lemons, cinnamon and caramelised nuts
Sweet potato and feta (cooked by Angie)
Rocket and watercress salad topped by purple radishes
Green olive focaccia
‘Triangles’ of filo pastry stuffed with cream cheese, cheddar and fresh babyleaf spinach, edged with poppy, linseed and hemp seeds.
‘Sun dried’ tomatoes (I’d cooked them all night in the simmering oven of the Aga) topped by hazelnut and almond Picada
Butternut squash with smoked aubergine, yoghurt and pomegranate molasses (an Ottolenghi recipe, told you I was working my way through their book didn’t I?)
Parmesan, Brazil nut butter and poppy seed crackers were served at the end because the Aga had slowed down so much…er well that was the ‘cheese course’ then.
Sour cherry clafoutis were served so late, some guests had to leave, for the same reason.
Was too knackered to serve coffees, little sugared almonds and aniseed biscuits I had bought.
The broad bean dip didn’t get served, none of us really liked it. That recipe (from great tapas restaurant El Parador in Mornington Crescent) needs work.
Now it’s the morning and my whole body hurts. Lovely night, shit loads of work, thanks everybody who helped.