Invited by Eurostar, food bloggers were invited to take a ‘little break’ to encourage us to visit nearby European cities such as Paris, Brussels and Lille for the reasonable price of £59 return. Lille is probably the least known of this trio.

Lille is situated in the North-West corner of France. The coal and mining industry there, like in the North of England, was decimated in the 70s. Statistics show that the Northern French are poorer and drink more. On the route from Paris, the architecture gradually changes as you near Calais. Buildings are made with red bricks and you see terraced houses with gardens, unknown in the rest of France. The people are known as ‘ch’timis’; they add a ‘sh’ sound to anything beginning with ‘c’ (eg ‘ch’est =c’est). The Picardie or ch’timi dialect springs from early French with Flemish influences. One of the biggest comedy hits last year in France was the film ‘Bienvenue chez les Ch’tis’ poking gentle fun at this unloved area.
As the best of British manhood, soldiers, come home from Aghanistan, in ever increasing numbers, rotting in their bodybags, sent by politicians so that their own sons can continue to live consumerist lives, I remember also that Picardie was the scene of some of the worst carnage of World War I.
Yves Montand, the French Frank Sinatra, famously sung ‘Dansons la rose (Les roses de Picardie)’ although the song was originally written by a British officer in 1916, inspired by his love for a French widow while staying under her protection in that area.
Our trip lasted 12 hours, taking the 7am train and returning at 7pm. The point of this promotion is to show that even in such a short period of time, you can take a break, have a change of air, and return refreshed.
You can spot a food blogger a mile off: they aren’t slim (bar the Asian food bloggers such as the thorough and hard-working WorldfoodieGuide, who have a horridly unfair genetic advantage). We were a sight with our muffin tops, beer bellies, double chins, pudgy hands, chafed thighs and flat feet. We didn’t so much tour Lille as waddle around it. Give us another year and Eurostar will have to provide wheelchairs for a similar trip.
This was our schedule:
6.59 Eurostar leaves St Pancras. We met romantically under the enormous bronze statue of a couple saying farewell to each other. I tried to encourage food blogger duo ‘Dinner Diary’ to replicate this pose. I noted that Krista of londelicious was wearing sexy but impractical patent leather wedges.
On train: we weren’t in First class but some sort of Club class. Nice. Big bucket seats, copies of Paris Vogue, and breakfast: tiny sliver of smoked salmon, two tiny blinis, bit of creme fraiche, coffee or tea, yoghurt, orange juice, rolls etc. Helpful staff. I didn’t eat much, had a feeling I might have to pace myself.
On the way I talk to two bloggers/mothers: Margot of coffeeandvanilla, who is Polish, married to a Dominican, hence the ‘ebony and ivory’ style title of her blog. She creates Eastern European/Caribbean fusion food. Also Michelle of greedygourmet who plans to set up a site for food bloggers to sell their food, a gastronomic ‘Etsy’. Great idea! Sign me up!
9.27: Arrival in Lille: the young French PR girls lead us around Lille. It’s sunny and the shops aren’t open yet. We are shown a belfry, very typical here, and a building with cannon balls wedged into the walls, result of a siege. We are shown Benoit Chocolatier. I thought we would taste some chocolate but the girl behind the counter backs away looking nervous when faced by 15 food bloggers photographing manically.
We discover a cake shop that sells multi-coloured macarons. We get a bit in trouble with shop owner because we help ourselves. I buy two cakes because I never liked macarons. Kang gives me a macaron to try. Amazing. I now love them. 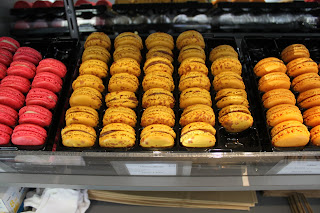 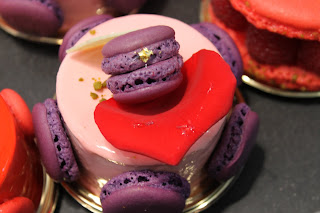 11.00: Coffee and Patisseries at Meert: set in a beautiful 18th century tearoom with high ceilings and an enormous chandelier. Some of us order the speciality ‘gauffres’ or waffles. But these are not the large waffles you might imagine, they are tiny, slim wafers filled with Madagascan flavoured butter cream. Nice. Up the other end, they’d ordered ‘Merveilleux’ cakes which were like giant Ferrero Rocher. They were about 1o cms high and 6cms in circumference. Eventually they were passed down for the rest to taste, the summit of gluttony only partially reached. 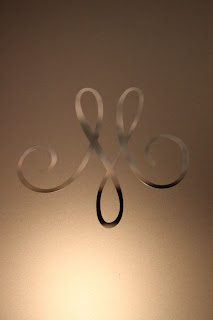 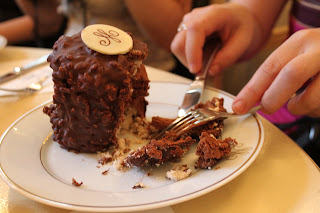 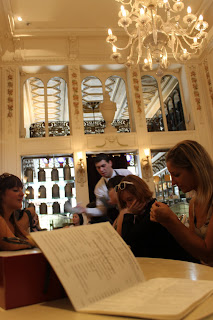 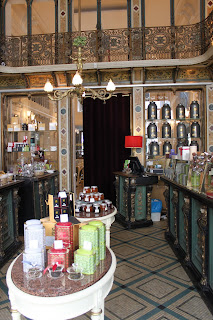 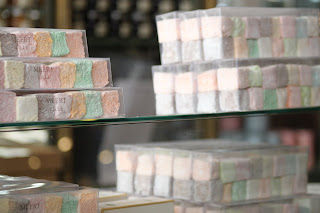 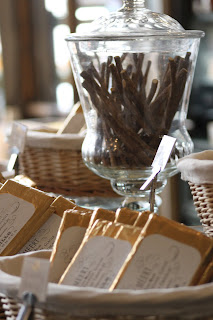 13.00: Cooking course at L’Atelier des Chefs. We were divided into groups and asked to cook Northern French specialities: Pavé de cabillaud au miel de fleur de bière, palette colorée de légumes de saison: cod sautéed with honey and beer eau de vie/a fricasée of finely cut seasonal typically Northern vegetables and Ch’tiramisu, a ch’timi version of the classic dessert.
I learnt things:
I signed my fish plate with my own signature in balsamic glaze. We all sat down and ate together, family style. This was my first ever cooking lesson, very enjoyable and even though this was pitched at beginners, you can always learn more.
I bought a flat pastry brush and some fizz bomb sprinkles at the shop. Eatlikeagirl’s bag was getting heavier, she can shop like a champ. 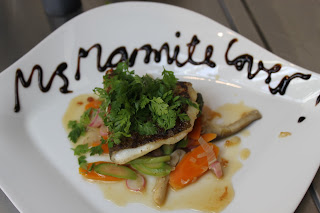 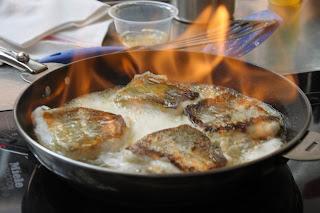 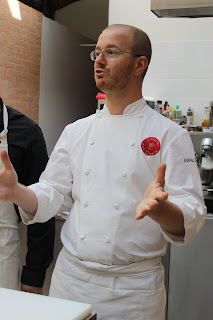 16.00:Beer and Cheese Tasting at La Capsule. Entering into the damp dark cavern of this typical corner bar, which also has a specialist beer shop, even the greediest of us were flagging a little by now. The owner, Aymeric, prodded us through the beer tasting.
Beer is roughly divided into three categories:
Belgian: syrupy, sweet, round
German: lagery, light, refreshing, clear
British: bitter, warm, hard minerally water
Aymeric jokes:

“we have a phrase in French about English food …’if it’s cold it’s probably soup, if it’s warm, it’s beer'”

The beers of Northern France are Belgian in style. For this tasting I sat next to Liz Upton and Andrew of Spittoon. A good idea because I know sod all about beers and they were slurping and sniffing knowledgeably and saying stuff like “coriander!'”and “hoppy!” I tried to join in with words like “aspirin” and “horlicks” but I don’t think they were fooled.
Andrew doesn’t really look like a wine blogger because he has facial hair, doesn’t wear a neckerchief/cravat and isn’t gay. Beer bloggers look like Bill Bailey, I imagine.
This joint reminded me of Garlic and Shots, that goth restaurant in Soho. I once had a date there. The bloke had waist length black hair, was dressed head to toe in black leather and kept biting my lips to the point of drawing blood! Nice guy but didn’t want to join the undead.
The Lilleputan Aymeric giving us the tasting asked if any of us are members of CAMRA, the campaign for real ale. Liz put up her hand. He is trying to start a French version. Beers are rather swamped in France by wine. Many of the beers we tasted not only could not be bought in England, but wouldn’t be available in the rest of France either. The beers were local and distributed within a 20km radius.
1) Page 24: rhubarb, coriander, made ‘à la chicorée’ which doesn’t mean it was made with chicory. It’s a ‘faux ami’ between French and English: chicorée is endive and endive is chicory.
2) La Bavaisienne: darker, caramel, oldest beer, made in 19th century copper tank.
3) Etoile du Nord: a bit like Jenlain, hoppy, bitter, 60 IBU. For comparison Stella is 3/4 IBU.
4) Kaouet pronounced [cowet]: made 20 kms from Lille. Blackcurrant. The owner says the name comes from a village festival which celebrates a Giant in the shape of a cat called Kaou. It all sounds a bit Wickerman. 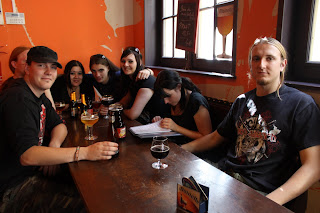 Goths at the bar 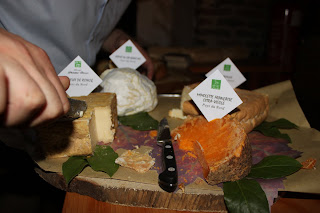 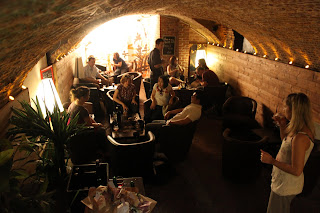 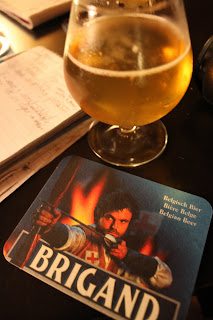 Marcus of Big Brother beer mat
The beer was accompanied by some local cheeses which matched well.
1) Cremet du cap-blanc-nez..ok but bland compared to the others…
2) Maroilles …really strong, like two day old socks, but my favourite. There is also Vieux Lille also known as Lille Stinker which we didn’t get a chance to try.
3) Mimolette Francais, Extra Vieille, dark orange, a bit like Edam
4) Crayeux de Roncq, creamy pungent, strong
These cheeses are available from Phillipe Olivier’s cheese shop.
17.45: Shopping and leave for Eurostar. We go to a beer shop which also sells sweets, violet liqueur and gauffres from the region. 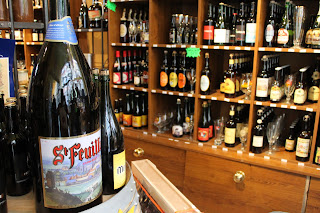 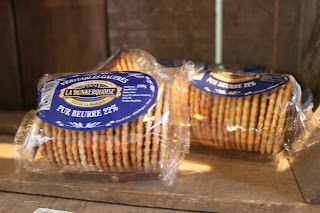 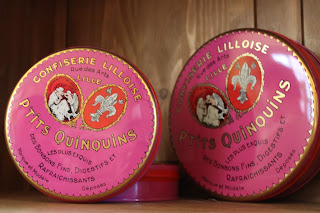 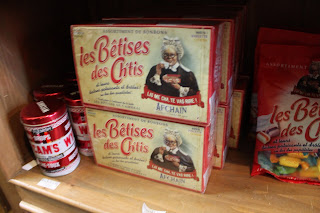 Eatlikeagirl and me get a bit distracted whilst shopping. She is now carrying so many bags, one of which appears to contain a tree trunk, that she is limping. We get a bit lost. We discuss the fact that we don’t actually want to go back but then we imagine the poor PR girl, Sarah Oliver, who organised this, getting in trouble for losing food bloggers. Eventually we find the station. Sarah is looking worried. Eatlikeagirl and me feel like the naughty kids at the back of the coach on a school trip.
18.35 Eurostar departs: we are given dinner with champagne. I’m dead full. But order the dinner anyway. The menu sounds fab:
Tortellini farci aux epinards et a la ricotta avec aubergines, pesto et coulis de tomates.
Which turned out to be: luke warm, been sitting there for hours, tortellini, topped with tinned black olives, under-seasoned vegetables with a rusty salad. I taste it, put down my fork and sigh out loud

Foodstories, the Julie Christie of food blogging, with her heavy blonde fringe and big blue eyes, looks round and agrees. I continue…

“I mean you can understand it on a plane but on a train. How hard can it be to do tasty food?”

“You don’t like it? Normally coming from the Brussels end it’s pretty good”

I feel a bit guilty. Sometimes my own food fascism irritates me.

“I know I’m not paying for this, it’s a press trip, but why tinned olives?”

I turn round and notice the other food bloggers such as Cheesenbiscuits haven’t even bothered with dinner, they are guzzling champagne, free mini bottles of wine and the contents of their beer shopping from Lille.
Once at St Pancras they all go on to the champagne bar… 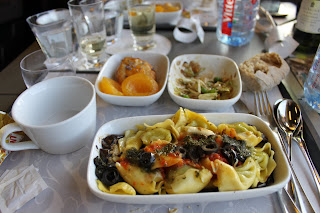 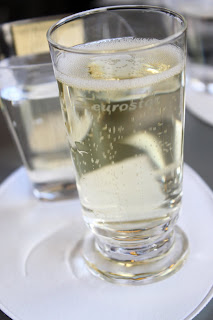 I’m really tired. But it’s been a great day. Lille is pretty, has plenty of activities, is fantastic for shopping and well worth a visit. Although by the time I arrived home, I realised I had a blister on each foot, nappy rash and two squashed cakes. 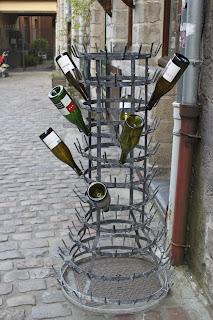