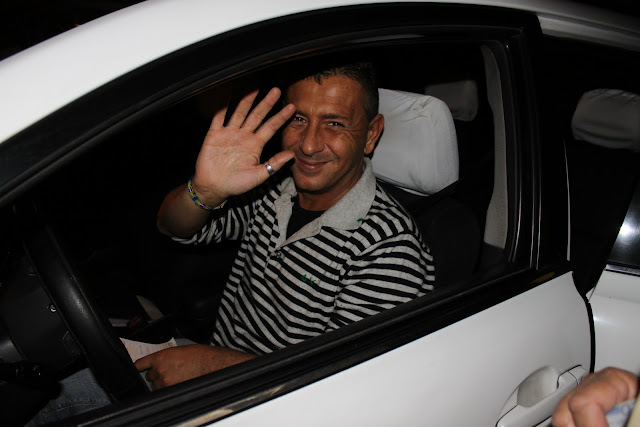 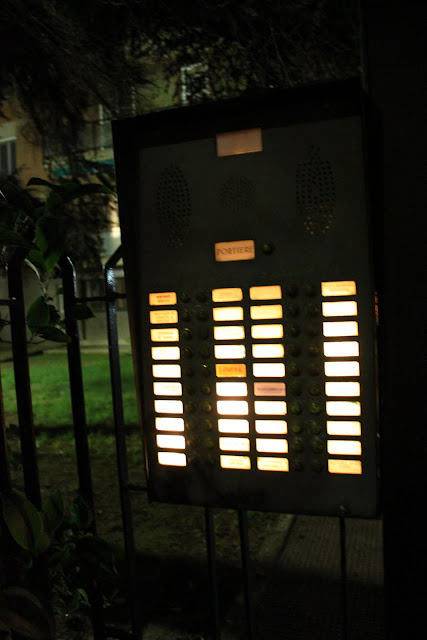 The bells, the bells… 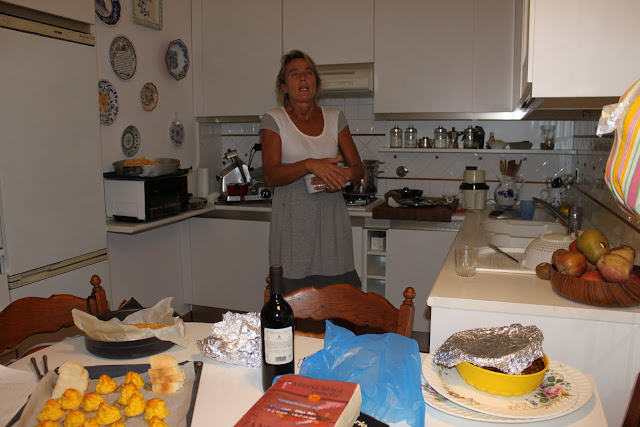 Luisa in her kitchen 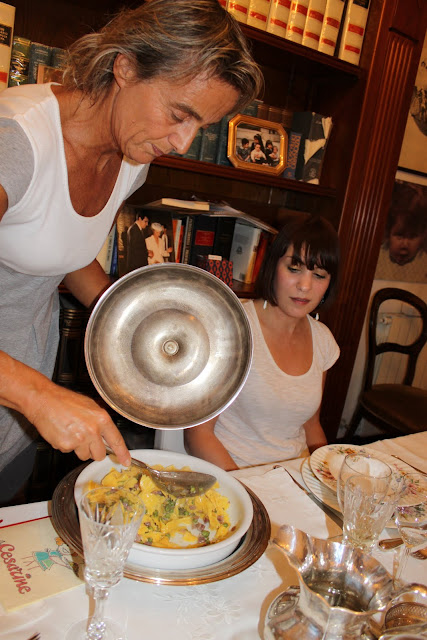 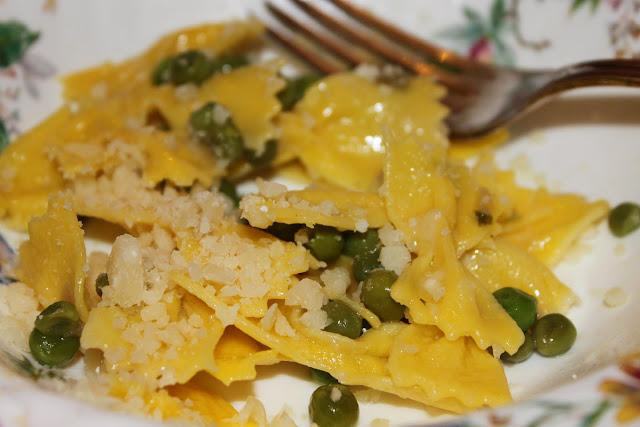 The strichetti with peas and parmesan 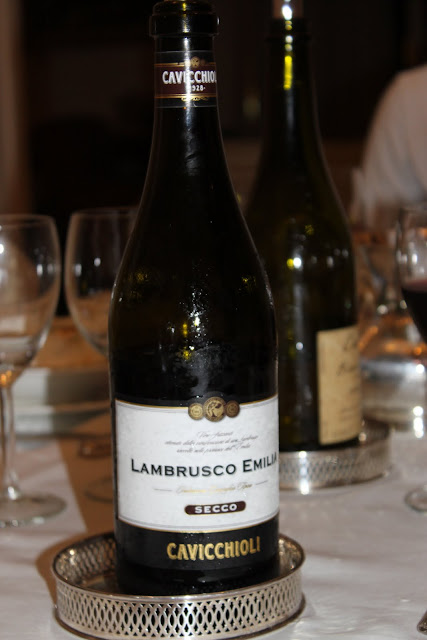 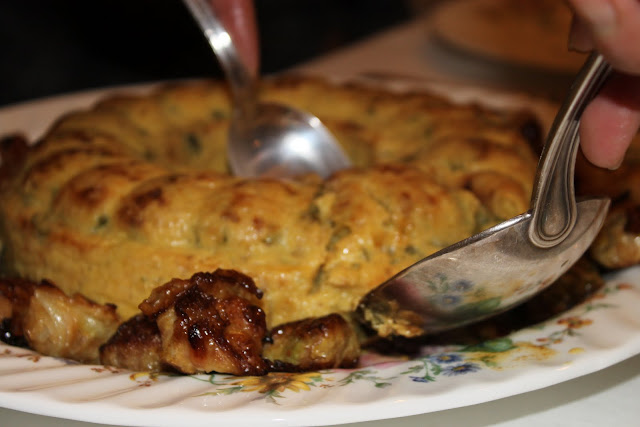 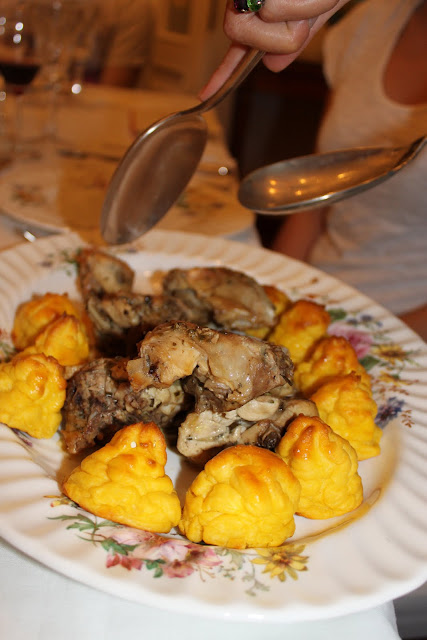 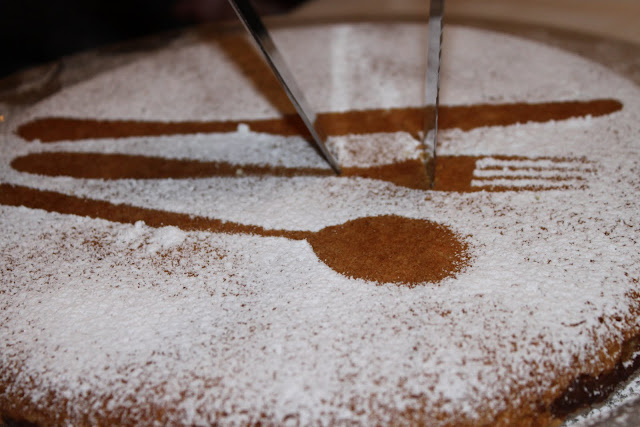 I’d heard about the Homefood Italy project years ago on Woman’s Hour. It was one of the inspirations for my home restaurant. The best Italian food, I’d heard, is to be had in someone’s kitchen, not in restaurants.
The visit to a Bolognese home restaurant, in one of the gastronomic centres of Italy, took months to arrange, for it was plagued by bureaucracy, Italian style. Their website, with irritating Italian folk music that starts up again every time you click on something, didn’t work properly. Eventually, after a few email squabbles, the association consented to deal with me directly.
One of the disputes was over food.
As readers will know, I do not eat meat. Vegetarianism (although I’m a pescatarian) is rare in Italy. I’m used to having to compromise when I travel. But as they’d asked me to fill out a bunch of forms about my allergies, special diets, religious beliefs, likes and dislikes, I assumed they were going to take it into account. Not so…I received this email…

“I would like to make you notice that meat is present in both menus in almost all dishes prepared, so I simply think that they cannot be suitable for you. We are not a restaurant but a cultural association, and each Cesarina offers a fixed menu that was studied to offer her guests a real “cultural journey” through food, and not only a plain list of dishes. For this reason, menus cannot be changed (apart from small changes in case of allergies and intolerances to some ingredients). But if you do not eat meat, I think that is a problem almost everywhere in Italy at the Cesarine’s, since meat is basic in Italian culinary traditions and we cannot personalize menus totally on request.”

Fair enough, I’m used to that. Although at my ‘home restaurant’ I not only cater for vegetarians, I also cater for vegans, coeliacs, lactose intolerant types, people who don’t like coriander (groan), people who don’t eat deadly nightshade vegetables (double groan). And I’m cooking for 30! So why the form filling? Could it be that, just like France, they simply love form-filling as a satisfactory occupation in its own right?
The next hurdle: halfway through finally establishing a date for a meal, I sent an email to say ‘hold on I’ll just confirm my flight’; in the middle of the day, in the middle of the goddamn email exchange, on the 31st of July, the association went on holiday for a month. Of course! It’s Italy! Nobody works during August.
When they returned, we resumed our negotiations. I was hoping to eat at the house of two separate ‘cesarine’ (female Caesars who rule the hearth) over the weekend but the meals were cancelled, not enough guests. I couldn’t change the weekend, I’d already booked my flight. I persuaded my parents to come with me. Then phew, we could eat at one place but not two. I had to fill out more forms detailing my parent’s food preferences and intolerances. My mum doesn’t eat meat either.
You also have to pay the association a fee, a temporary monthly membership, to go to the meal.
The association had given us an address but not the information that the ‘cesarina’ lived in a flat. Dropped off by a taxi driver well versed in local wines, wearing a gondolier’s outfit of blue and white stripes, I realised that the ‘house’ was a complex of flats and I didn’t know which flat or which building even. Finally, after looking in vain for the name ‘Luisa’ I buzzed on every bell. Luckily, somebody, I don’t know who, let me in.
Entering the grounds, I heard a lady calling to me from her window high up. I assumed she was the cesarina. I spoke a mixture of French and Spanish, and she seemed to reply that the cesarina was not her but lived in a flat on the third floor. I took the lift to the third floor and knocked on every door. Eventually somebody answered. Despairing of ever finding the actual apartment, I was relieved finally to find that somebody could direct me to the correct address on the first floor.
The actual meal consisted of four courses: focaccia (cake-like in the style of the region) and fresh strichetti pasta made by our hostess to start, then a courgette ‘cake’ and cabbage wrapped meatballs, rabbit and pommes duchesse for mains, finishing with an almond torte. The food was nice but every dish was slightly dry, like a dieter’s version of Italian cuisine. (I have a heavy hand with the oil and the butter myself). Despite the copious form filling, the non-meat items were served next to the meat, stained by the juices.
For almost 40 euros, which is £40 nowadays, at least the wine, a local sparkling white, Pignoletto and a sparkling red, were included. We finished with a glass of Nocino, a walnut liqueur, bitter, syrupy and sweet.
Looking back, I realised I’d foolishly harboured fantasies of eating in the kitchen of a little Italian mama wearing black, possibly played by Anna Magnani, surrounded by sons in vests. Every so often she would pinch my cheek and clip the ears of the hairy sons. Calorie counting would not form part of this vision.
In reality our hostess is a suburban housewife. Her flat, lots of Versace style gold leaf, marble, opulent china and crystal glasses, gleamed from the attentions of her cleaner, We ate in the dining room. There was a family atmosphere in that her mother and sister were present in the kitchen and we could see, scrawled on a wall, the different heights of her children as they grew.
One of 30 ‘cesarina’ in Bologna, Luisa has been doing meals for strangers for five years, once or twice a month and hasn’t changed her menu. I was one of five guests, including my parents, a Canadian girl studying Italian and her London boyfriend.
This ‘cesarina’ was fascinated by the fact that I am, I suppose, a cockney cesarina!

“How many guests?” She asked.

“And you do this all by yourself? Without an association?”

She simply couldn’t believe it.

But I enjoyed meeting Luisa, seeing how she lived and gabbling away to her in a mix of French, Italian and Spanish. 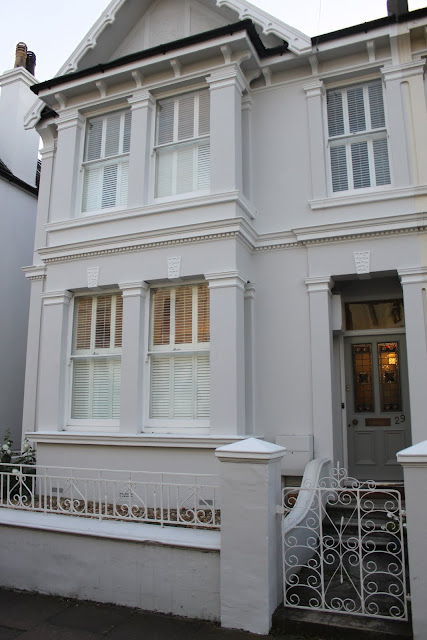 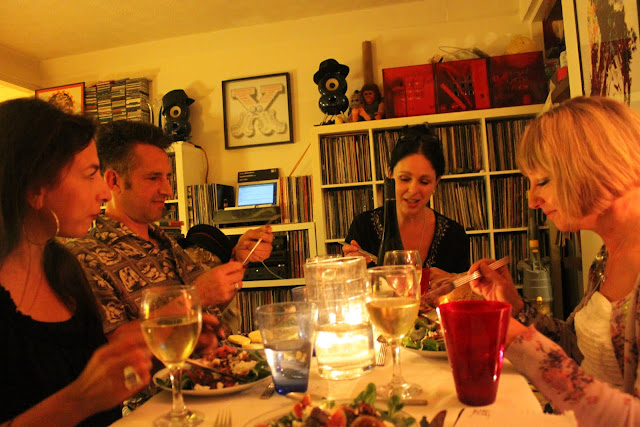 Ratty sitting at the end 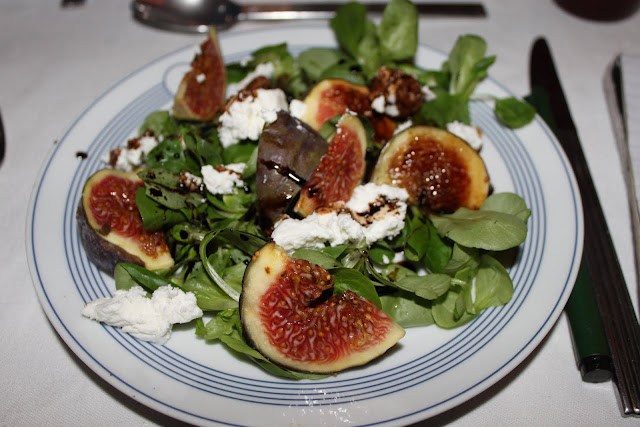 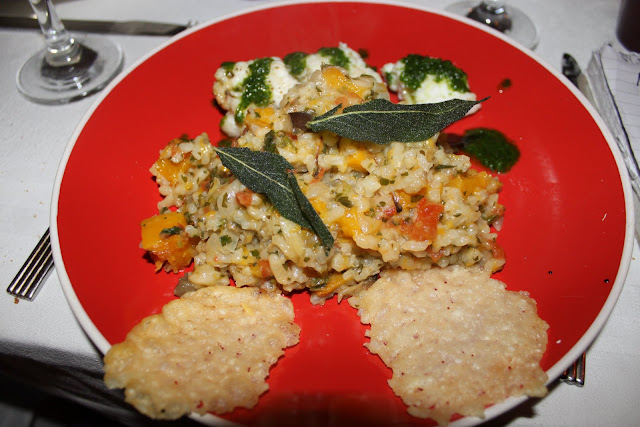 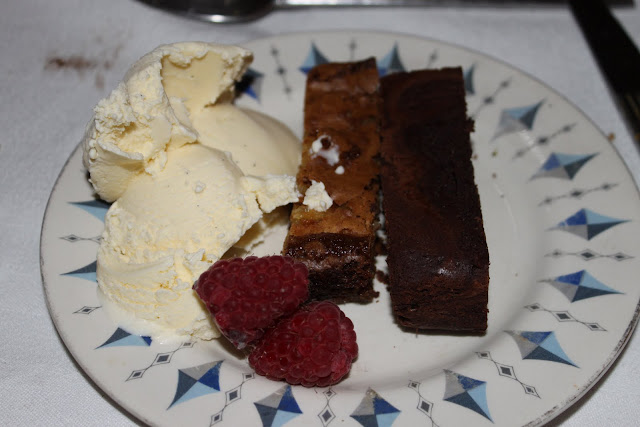 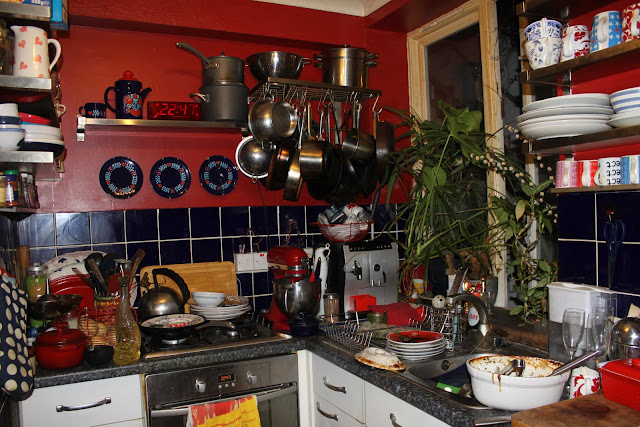 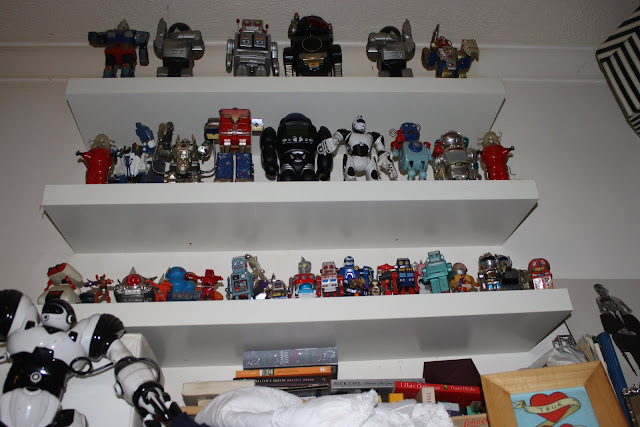 Robots in the bedroom 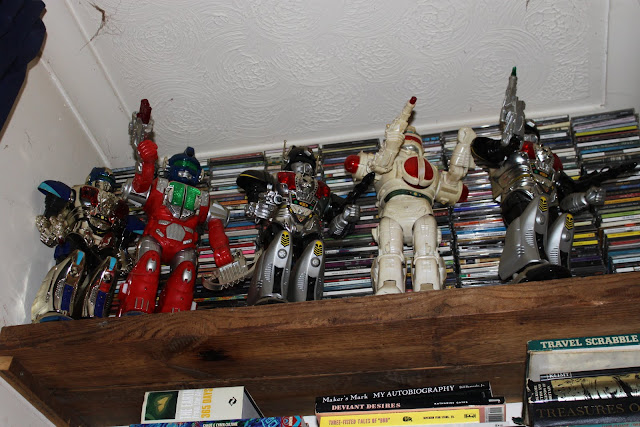 …in the living room….
I went to a Brighton food festival recently which had ‘home dinners’ at people’s houses as part of the festival. This was organised by a PR company who were as clueless as the Italian home food association.
Again bureacratic form filling (the whole point is mutual trust so why?), a set of terms and conditions of behaviours acceptable or not. The PR company got half of the £10 fee given to the hostess but neglected to mention the time the meal started. The poor hostess expected us at seven, and we all turned up 45 minutes late. They also didn’t tell her that I was a vegetarian although I had told them that I’d specifically chosen that menu because of the lack of meat. The hostess, Ratty, changed the menu at the last minute, unaware of this.. She had to pick ham from my salad.
Strangely despite the cheapness of the meal, I was the only guest to tip. I’m always amazed at this. The menu with truly fantastic wines from Tengreenbottles (I’m hosting a tasting with them on 13th November) thrown in, cost far more than £10 a head, especially when you consider that the hostess only got £5 of this fee. This was the menu:
Salad of figs, lambs lettuce, air dried ham & young goats cheese with a balsamic reduction
Panfried monkfish fillet with butternut squash & aubergine risotto with parmesan crisps
Deep fried sage & parsley oil
White chocolate & & chilli blondie & a chocolate brownie with homemade vanilla ice cream.
Bonus dessert of recently made chocolate ice cream with white chocolate chips
Another thing that was nice is because she has so few guests, four including myself, Ratty sat down with us to eat. Ratty was delightful company. Her small basement flat was filled with robots; this is an obsession of hers. Her boyfriend, who was not present, banished to the pub, had about 300 records and several thousand CDs. I love that in home restaurants you get to see people’s little idiosyncracies, their hobbies, their obsessions, it fascinates me. I went with a friend from my teens, Andy, who has the dubious distinction of possessing the world’s largest collection of crisp packets. 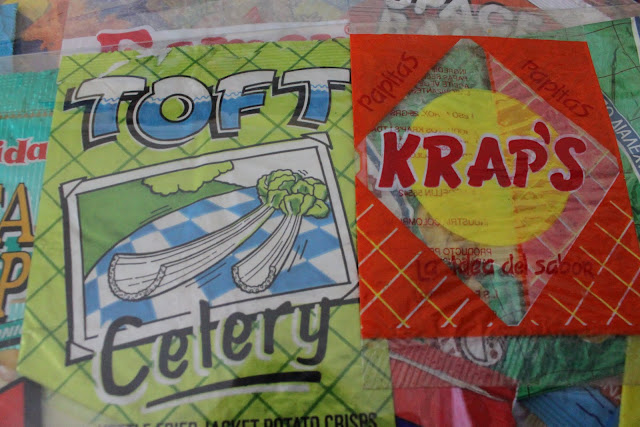 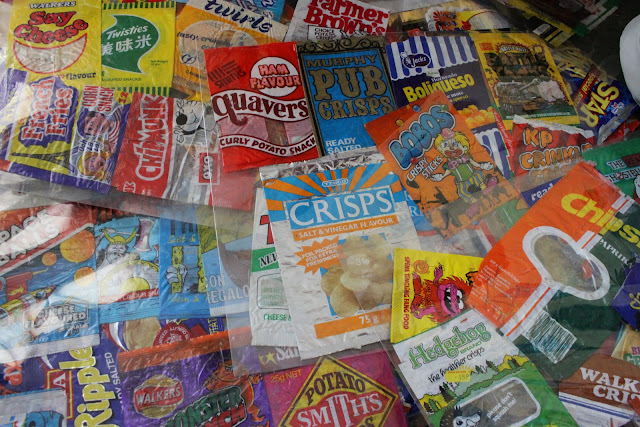 But my conclusion is that like so many things in life, if you want to do something well, you can’t rely on associations or PR companies, they will lack that personal touch and involvement. If you are going to do a home restaurant, do it yourself.