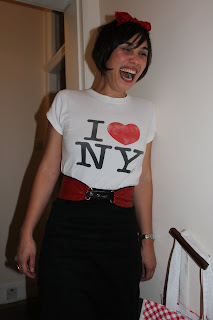 One guest, @bribedwithfood, came dressed in the spirit of the evening… 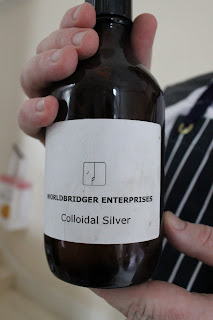 Colloidal silver used in the cocktails 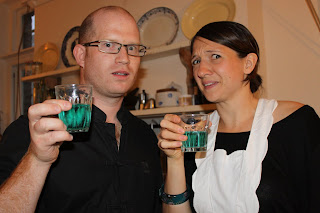 Dan @foodurchin and Claire @beetroute, who helped out, sip the conspiracy cocktails… 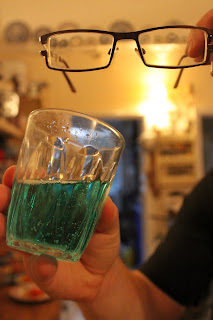 Oh my god, Dan ate some of the monatomic gold and look what happened! 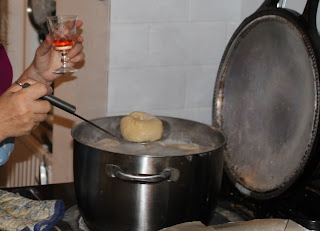 MsMarmitelover boiling bagels with customary glass of vino in hand. 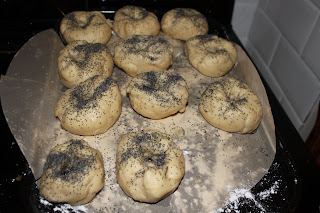 My bagels topped with poppy seeds. You have to do this just after boiling otherwise they won’t stick. Then bake them for about 20 minutes. Yes they do look very home-made but were great hot out of the oven with cream cheese and butter with lemon zest. 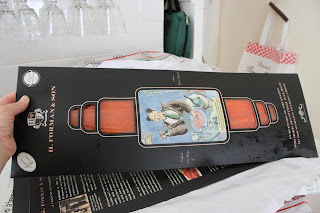 I got the salmon from Forman & Field who smoked it on Thursday in their London smokery. Right that does it, I’m never buying cheap smoked salmon again. The difference in texture, taste, colour compared with the cheap stuff is astounding. 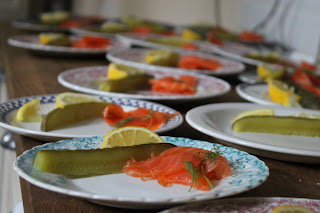 Dill pickles and smoked salmon being plated up… 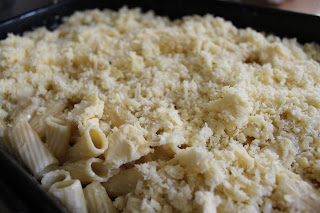 Mac and Cheese, topped with the incredibly strong and sharp Glastonbury cheddar from Riverford Organics; so intense, almost like a fondue. I used nice big macaroni from an Italian shop too. (I forgot to take a picture of it cooked) 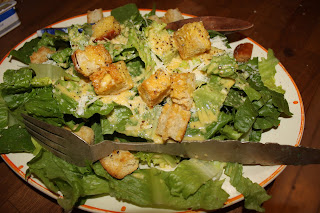 Caesar salad with Aga baked croutons (thanks Dan), Romaine lettuce, Parmesan and the classic Caesar salad sauce. It was hard to get this sauce right. Followed one recipe that talked about coddling the eggs. It neglected to mention you don’t put in the whites. Then the doorbell rang and Michel Roux’s book ‘Sauces’ arrived which explained how to make the sauce properly. People loved it! 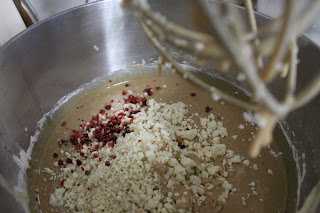 The mix for the white chocolate brownies with pink peppercorns. 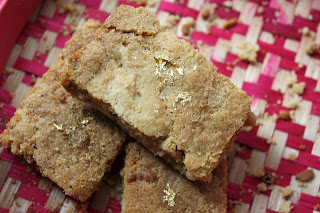 Decorated with edible gold and with the secret ingredient ‘monatomic gold’ in them. 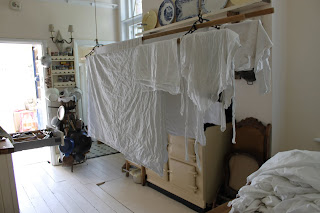 This was my first time with two nights on the trot. So next day, up early, laundry hung up. Yinka came to help. When Yinka emailed me I assumed because his name ended in ‘a’ it was a girl but he turned out to be a man. Yinka’s family come from Nigeria and most Nigerian names are unisex. This is why Africans often add Mr or Mrs to their names, it’s not just formality! 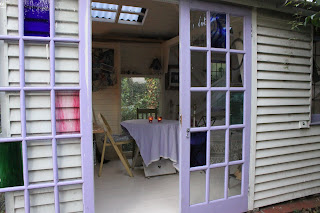 The summerhouse. I spent all week painting the inside. 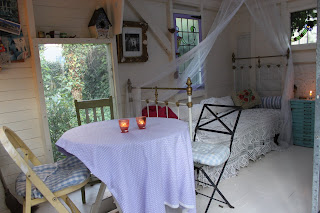 The perfect love nest is it not? Available to rent as a private room for £50 (plus cost of dinners) which includes bottle of champagne and wood fire if it’s cold. 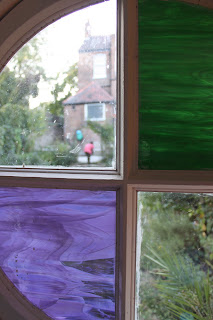 Through the round window… 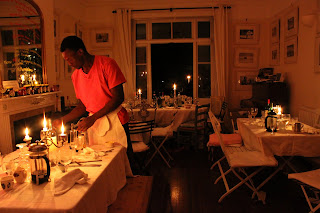 I got Yinka to wear the French maids pinny. He ended up looking like the ‘maid’ from La cage aux folles. This was taken at the end of the second night when everybody had gone home. The room looks glamorous, glittering with candlelight and my black and white archivally printed photos from an exhibition of my travel photography that I had in Clerkenwell. They are for sale, framed and signed at £250 each. 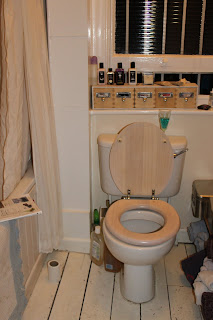 At the end I saw that somebody had made themselves comfy in the loo, reading a mag and sipping their cocktail! Quite a few ear buds were used too!
Although the theme of Friday night’s meal was slightly controversial, it does get people, strangers on large mixed tables, talking. On one table they got to discussing conspiracy theories in general. One girl (‘coeliac girl’ who I did a special menu for) was from Lockerbie and another guy, an Englishman, ran a website called Friends of Iran, who are ‘committed to challenge the denial of equal rights through demonisation’. In the wake of 9/11, he was called in for questioning. This lady below, from the BBC (I’m sure there are lots of conspiracy theories around that organisation) brought her own Mojito kit: brown sugar, fresh mint, a big bag of limes, rum and tonic. She then requested a cocktail shaker and proceeded to make everyone a Mojito. Atta girl! 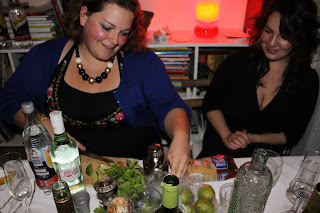 In conclusion doing two nights consecutively makes economic sense: less wastage and I don’t have to spend the rest of the week living on the same meal. It’s also a chance to fine-tune the timings and the recipes. The second night went much more smoothly as I knew exactly how long it would take for that amount of bagels to bake in the Aga. One of the difficulties of cooking for so many is that any normal recipe no longer applies; you can’t just triple or quadruple the quantities.

However I had to be organised, not drink too much on the Friday night (made up for it on the Saturday) and try to get ahead on the clearing up. I also had the hiccup of my teen getting stung twice by a wasp in the afternoon. She was in so much pain for so long I wondered if she were allergic and I would have to take her to the hospital. What would I do if I had to cancel? Ask front of house to let the guests in, say ‘dinners in the oven’, can the last person out pop the keys through the letterbox?
Thanks very much to Dan, Claire and Yinka for helping out. xxx