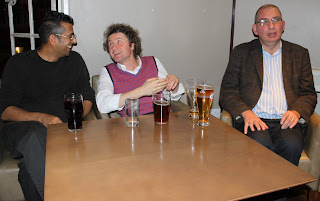 Singh, Goldacre and Cohen enjoying a pint at the Westminster Skeptics meeting. 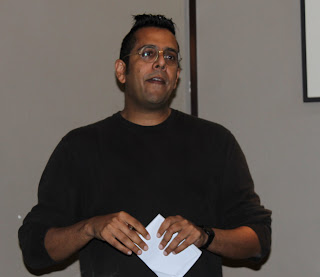 Readers will know that I have been following the case of missing Madeleine McCann. I’ve been perturbed by the actions of their lawyers, Carter Ruck, who menace with libel anybody who questions the parent’s story. They have managed to ban Goncalo Amaral’s book ‘The Truth of the Lie’ and sent threatening legal letters to various websites and discussion forums. I recently spoke to a Sky News journalist who told me

“Any news comes in, we are told to write it from the point of view of the McCanns. But you will notice, we never say ‘abducted’ Madeleine McCann, we always say ‘missing’ or ‘disappeared'”.

Whatever you think about this case, most people would agree that free speech is important. Particularly in Portugal which only recently became a democracy.
On the 12th of October, around 8.30pm, I saw a tweet from @guardianmedia. They were being gagged from reporting on Parliamentary proceedings in apparent contravention of the Bill of Rights. Checking the story it was clear that Carter Ruck were up to their tricks again. But this time they went too far. Myself and many other twitterers RTed and spread the word wide and far. One blogger found out the story was regarding toxic dumping by Trafigura. Soon the words #carterruck #trafigura and #guardiangagging were trending all over the world.
The night after I attended a talk at a new branch of Skeptics in Westminster, started by lawyer David Allen Green. Tonight’s star speaker was Simon Singh, fighting a libel action brought by the British Association of Chiropractors; and guest speakers, journalist Nick Cohen, and science writer Ben Goldacre.
Newsnight were there too. In fact I could be seen on the news clip that night, taking pictures and jotting down notes.
David has an interesting history…when I met him over a year ago he was a Conservative. But it was clear when talking to him that he was no ordinary Conservative, in fact many of his opinions were as far left as mine. In contrast to Winston Churchill’s (1) dictum that…