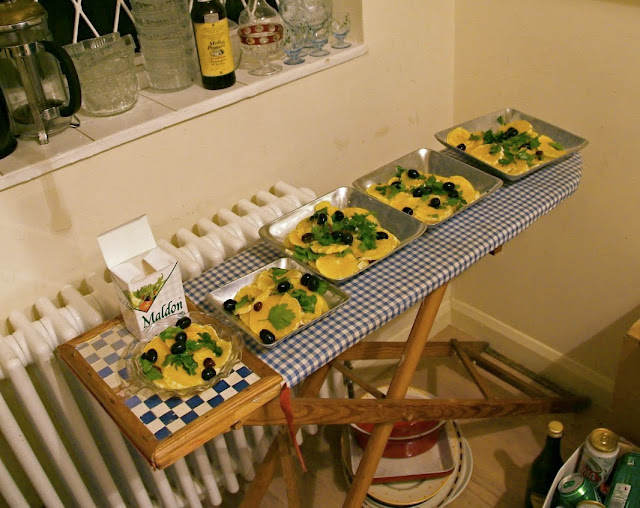 Sherry night at The Underground Restaurant.
I devised the menu around the sherries, starting from dry, moving gradually sweeter. I used only to like sweet sherries like Pedro Ximenez (PX if you want to sound knowledgeable) but working with them so intensively the last couple of weeks, I’ve become a fan of dry sherry too.
The Menu:
Rebujito
Tio Pepe fino sherry with 7up, ice and a wedge of lime (refreshing especially with salty tapas).
Boquerones
Olives stuffed with anchovies
Fried padron peppers with Malden salt
Pan con tomate y ajo (toasted bread rubbed with garlic, topped with chopped tomato, olive oil)
A shot glass of gazpacho soup (cold tomato, bread and sherry vinegar soup)
Apostoles
Roasted sardines with fresh mint and lemon
Red onion confit, fennel confit
Game chips or fresh made chips.
Orange and black olive salad
Matusalem
A Spanish cheese board:
Tetilla ( a breast shaped milk cheese); a rosemary hard goat cheese; Manchego; Cabrales (a piquante blue cheese)
Quince
Kilburn honeycomb
Almonds
Olive oil and aniseed biscuits, oatcakes
Pedro Ximenez
Two turron icecream
Liquorice and chocolate jelly
Blueberries
Coffee
Andrew Sinclair from Gonzales Byass seemed a little shocked to be bossed around so much by MsMarmite, but hopefully he enjoyed the experience (next time bring a gimp mask). Certainly the guests appreciated his explanations of how to enjoy sherry…from the kitchen I could hear laughter. He did seem unprepared by the quirks of a home restaurant

“Where are the sherry glasses?”

he said looking askance at the collection of mismatched glasses of varying sizes (hell I’ve used candle holders in the past when pushed). Continuing with the theme of organised chaos, one set of larger blokes could not fit on a bench meant for three, meaning a garden chair was brought in and, lacking a cushion, a resourceful waitress (Bziffa!) used my pillow so that the guest did not literally freeze his arse off. I only discovered this when I went to bed and went looking for my missing pillow, finding it on the chair, bum-shaped dent still intact.

The ironing board was also brought into play when plating up space ran out. You have to be inventive in this game.
Your hostess threw on a little something she found in the closet…a flamenco dress matched with a Cath Kidston apron and an enormous red flower for my hair; I was a domestic vision in polka dots.
A guest came to visit me in the kitchen and confessed she was a friend of my upstairs neighbour. Who I have never met or seen. My other neighbours are very supportive of The Underground Restaurant and I always check if it’s too noisy or difficult in any way. This last neighbour is new and I was a little worried.
Turns out she reads my blog! She thoroughly enjoyed the firework display in my back garden on Guy Fawkes night(1). It’s all rather Lives of Others or Rear Window isn’t it? How very modern and alienated!
I confessed to her friend that I stole the neighbour’s copy of Vogue. It comes in the same wrapper as Vanity Fair, which I subscribe to, and one morning, no doubt bleary-eyed, I must have opened it by mistake.
I was disappointed, thinking that they’d sent me the wrong magazine but later saw a card from Vogue sent to the new and mysterious upstairs neighbour. Anyway, dear neighbour, I still have your copy of Vogue, albeit with slightly sticky pages, you can come down and get it any time… it would be lovely to finally meet you!
Recipes: 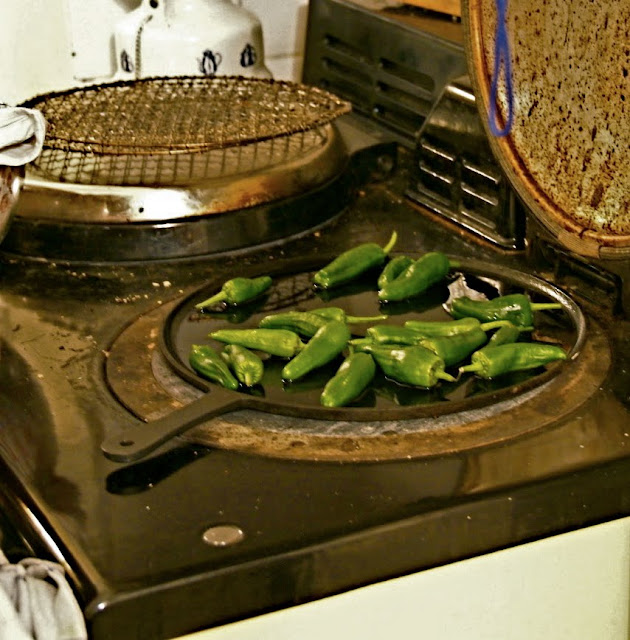 Padron peppers:
Pan con tomate y ajo: the Spanish equivalent of bruschetta,
Gazpacho: not very seasonal but still yummy.
Sardines and confit:
Game Chips or crisps:
This dish reminds me of the best crisps I ever had…from a street stall in Madrid…
Turron Icecream:
(1)On Guy Fawkes night, I hosted a private party for a film effects company. They mentioned they might bring a few fireworks. I was stunned when they set up a professional standard display at the end of my garden. One of them, looking like David Essex, all blue eyes and swarthy sexy gypsy roughness, had a professional arsonist’s license or something. The flats next door were hanging out of their balconies cheering “more more”… Who needs Parliament Hill?
Again severe lack of pix due to blogging/mac/picasa problems… my computer is full. I can’t fit anything more on it.