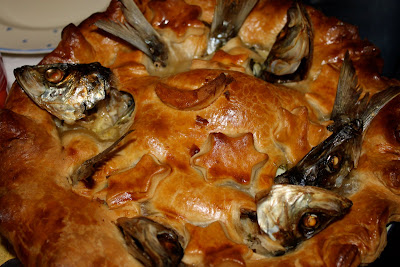 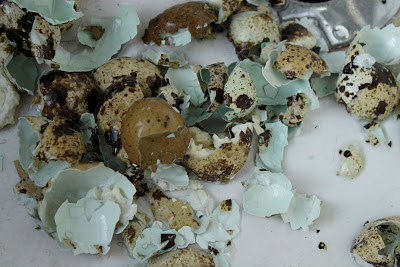 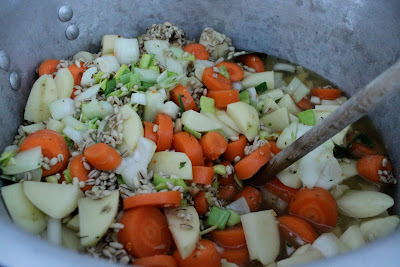 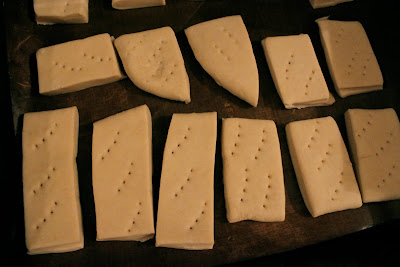 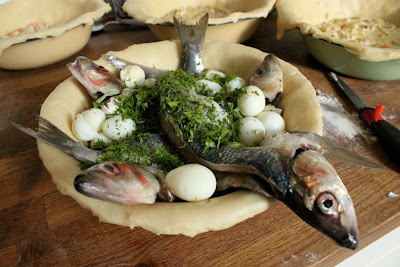 Stargazy pie: ‘canoed’ herrings, that is, they have been de-boned from the top. 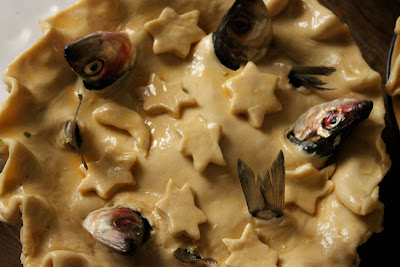 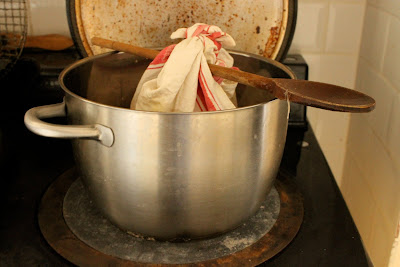 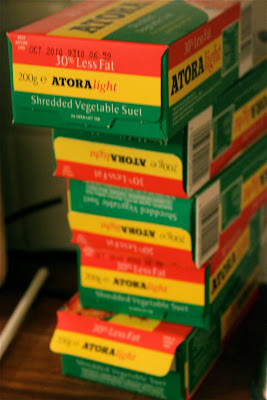 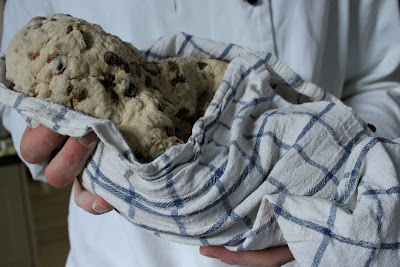 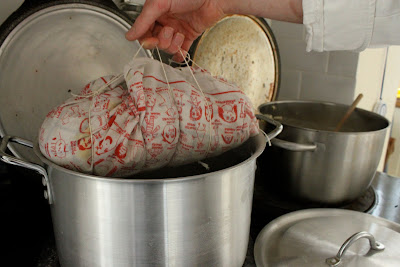 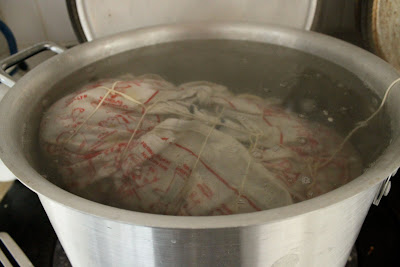 Wrapped tightly in a cloth, looking like Moses in the rushes, boil/steam for at least two and a half hours 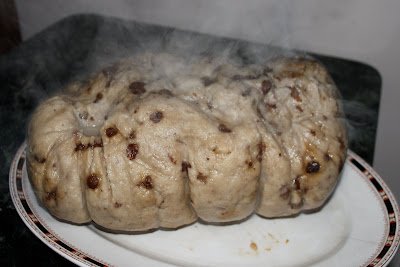 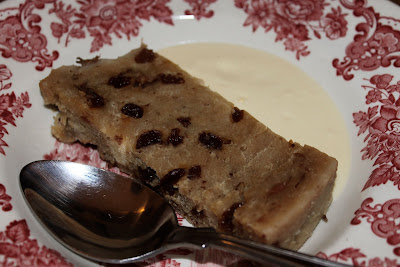 The two young pretty girls standing there in the cold trembled, made as if to go away. “Sorry, sorry” they whimpered.

“All right then you can come in” I allowed grumpily, beckoning them in “we’ll just have to put the table back. You’ve missed the first course”

They ducked in, still apologising, gabbling about transport problems.

“Don’t worry about the first course, if you like” they said in their piping voices.

Ross, Scottish Front of house, swivelled into the living room, carrying a 2 person table over the heads of the diners, plonking it down in front of the fire. The girls sat down obediently, coats still on, as table cloth, napkins, cutlery were gradually placed on the table. Two glasses of grog were dolled out.

Only later did I realise they were also supperclub hosts ‘Altenburg Kitchen’. I didn’t recognise them. My daughter said to me

“Mum you can’t talk to guests as if they are your children. It’s not me coming in late after a night out.”

I felt a bit sheepish. I’m getting bossier. I find myself telling guests off all the time. On Burns night I had to tell the whole room off for taking more than one welcome drink. I remonstrated with one woman for not eating up all her dinner. This night Ross told me somebody complained about corkage and the price of the meal. (My teen said afterwards “never tell mum stuff like this, you don’t know what it’ll lead to”).

I reacted with outrage “What does she look like?”.

“I told you there was corkage beforehand. It was listed on the website. Plus it’s not expensive”.

The poor woman, taken aback, said “it wasn’t me, it was her” pointing to her companion.

Who then said “It is expensive”.

“NO IT ISN’T’ I insisted “plus if you thought it was, why did you book?” I finished with triumphant logic.

She had no answer to that. In the end she thoroughly enjoyed it, despite a tongue mauling by moi.
Quite a few guests came in pirate or sailor gear, one with a plastic swashbuckling sword; the police laughed at her ‘dangerous weapon’ when she was spotted exiting the tube.
The final menu:
Grog (the original recipe suggested half a cup of rum, a little sugar, ginger, cochineal and hot water. Each. Naturally I diluted these proportions)
Blind Scouse soup.
Carrots, onions, leeks, pearl barley, butterbeans and various strange spices such as juniper berries, mace and all spice.
Hard tack or Ships Biscuit.
I didn’t bake these the prerequisite (if they were to last five years at sea) four times. Once was enough. I announced that any dentistry problems would be at guest’s own risk. Bizarrely some people liked them and asked for more. It was very difficult to knead the dense dough, folding it repeatedly into layers, one recipe suggested driving over the dough (in a bag) in a car.
Stargazy pie.
This was spectacular, theatrical food. Combining a few recipes together (some have pastry on the bottom, some don’t) eventually it was comprised of herrings, quails eggs, cream, white wine, carrots and onions. James of @mycotswoldfood made shortcrust pastry and constructed them while I got on with the rest of the prep. I can see why they are not on menus all the time as it’s very time consuming to make them. However it was well worth the effort. I added pastry stars and a moon on top and moulded the edges into wave-like shapes.
Dog’s Body:
or pease pudding. This took hours to cook, steaming in a tea towel. It’s the equivalent of dhal or hummus. I mixed the pease with copious amounts of butter.
Cheese board of Oatcakes, honey, Edam cheese and Cheshire cheese.
The original story behind Edam’s red wax skins is that the cheese was hung over cow dung to mature. The ammonia from the dung would stain the wax red. Edam and Cheshire were both authentic shipboard cheeses as I could not obtain ‘Flet’ cheese which is no longer made.
‘Boiled baby’
served with James’ superbly light custard to which I added rosewater. Rosewater was frequently used in the 18th century in much the same way that vanilla is nowadays. The boiled baby, a very heavy suet pudding, took hours of steaming. It was the sort of thing you’d really want to eat if you’d spent several bells up the rigging in a force ten gale. I had soaked the sultanas in sherry to add an alcoholic kick. 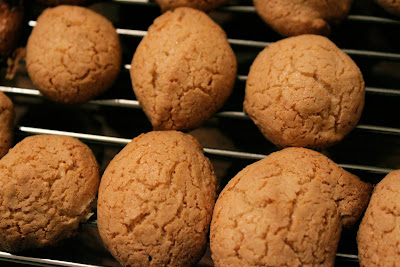 Coffee with ratafia biscuits
which were incredibly easy to make. Ground almonds, almond essence, rosewater and egg white.
Many of my recipes were sourced and adapted from this fascinating book ‘Lobscouse and Spotted Dog‘ by mother and daughter team Anne Grossman and Lisa Grossman Thomas based on the work of Patrick O’Brian. 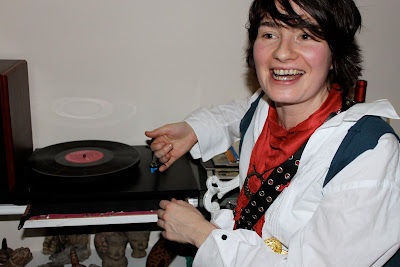 This girl had to be given step by step instructions how to put a record on. When the music finished, Ross the waiter said “we need another record”. “Why don’t you put the other side on?” I asked. He said with surprise“There’s another side?!” I was looking at him wondering if he was taking the piss/remedially stupid, then realised, of course, that CDs only play on one side. Youngsters eh?
It was great to work with and learn from James Benson, a gentle giant, previously a sous chef at Claridges and now located in the Cotswolds. Here’s his website and his blog (in my blog roll). He now caters for private dinners, weddings and tourists, the latter a great idea for mothers on self-catering holidays because it’s not exactly a break for them if they are still doing all the cooking like at home. James is used to adapting to different kitchens. Judging by the quality of his cooking, his sauces in particular were fantastic, I couldn’t recommend him more highly. The prices are damn reasonable too. We talked about the difficulty of making a living in food when you can’t sell alcohol as restaurants tend to make most profit on drink. 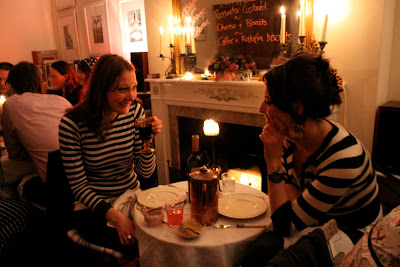 What would be a typical Georgian meal?

If you were going out to a pub or inn during the day, they served a thing called ‘the ordinary’, which was the hot dish of the day, or it would have meant cold meats and cheese on a sideboard, with a small salad selection.

If you ate in, it would be common to have a soup or a fish course, even it was just a couple of grilled or pickled herring/oysters, followed by dressed meat of some description or a pie served hot. It was good drills to have at least one salad and a crisply cooked green vegetable. Not so different to us now really. Portions weren’t enormous, so when you see loads of different dishes on a table, it doesn’t mean it amounted to gargantuan amounts of food. I can PDF you Hannah Glasse’s Art of Cookery if you like. @msmarmitelover