It’s been about a year since I first went to The Loft. There’s been a few changes: Nuno Mendez is about to open his new restaurant Viajante in Bethnal Green. There are more coat hooks and chairs. The Loft is now an atelier and showcase for guest chefs, the first of which is Ben Greeno who has trained at Noma. On this showing this is a worthy experiment. This is haute couture cooking. Here are the courses: 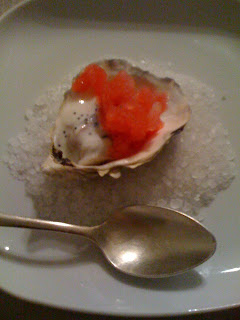 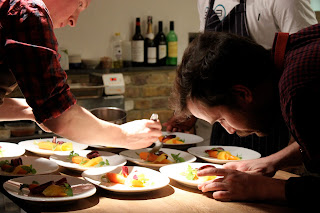 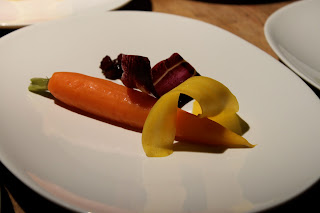 Three types of carrot: raw, cooked and pickled, yellow, orange and purple haze, chickweed from Bishopsgate, chicken glaze and chorizo (the latter two ingredients not on mine) 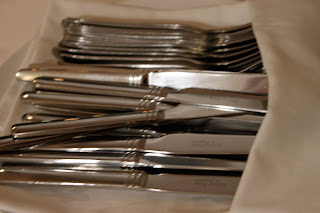 Les couverts in their little covers (1) even the micro lettuce was treated like a new born baby, bathed and put to sleep in it’s kitchen roll eiderdown. 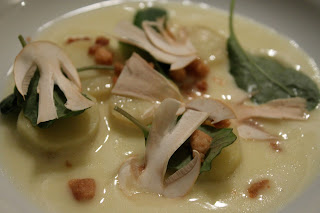 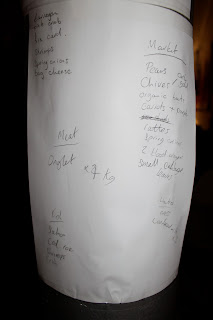 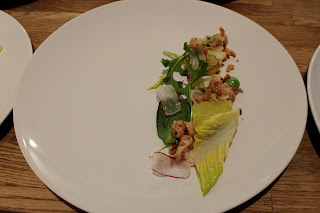 Salad: I kept waiting for the rest of the dish to be plated up. But this assymetrical light and fragrant salad with brown shrimp, brown butter, lettuce emulsion (egg yolk, oil), mandolined radish curls delighted with it’s prettiness. 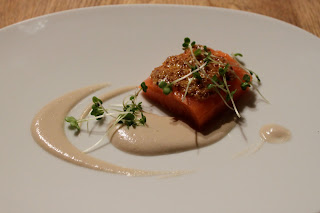 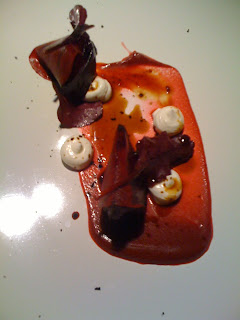 Beetroot, raw, pickled, puree and Kirk goat cheese (fresh from Denmark), liquorice shavings (Ben hates liquorice but he said “people like it”. I think that’s more a reflection of how long he’s been living in Denmark) and prune syrup (dried prunes, boil it up, strain it, keep reducing). Like a painting by Paul Klee. 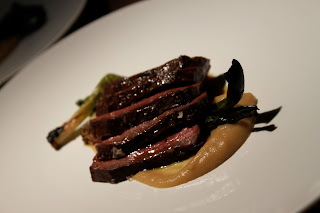 Beef onglet on onion puree. Probably very good.
In between courses the team cleaned the plates with white vinegar to get rid of smudges. Also at this point Vadim, the front of house, told the chefs to slow down the pacing of courses. In restaurants, you want to serve people quickly, turn tables. At a supperclub, you want to slow it down, it’s their table for the night. 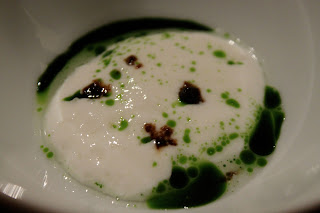 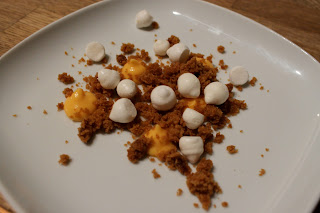 Tiny apple vinegar meringues (not apple cider vinegar, apple vinegar is common in Denmark), seabuckthorn curd ( a Siberian berry) ginger cake. The meringues were made in a dehydrator. They were very intense in flavour, hard to describe, very good. 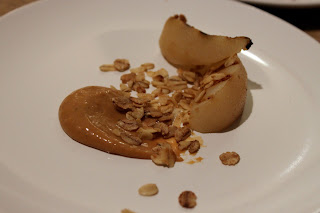 Grilled pear, brown butter caramel (a little like dulce de leche), toasted oats: a kind of posh cranachan
Some food isn’t just food. It’s an installation of the most ephemeral work of art you can imagine. It takes hours of practice to conceive, prepare, plate up and serve. Seconds to consume. Ben Greeno, a young chef from County Durham, has done his time, cooking since 15 years old, in various kitchens in the UK and Europe, including lengthy stints at the third best restaurant in the world, Noma, located in Copenhagen, Denmark. As he said “I’m ready”.
Readers of my blog will know I’m not a huge fan of the skidmark school of cooking. I prefer a jug to a smear, a large bubbling plate to a few dots artfully arranged.
I hate modern architecture too. But when you visit an original Le Corbusier building, as I did in Chandigarh, you realise that the imitators spoiled the originator’s reputation. Most people can’t do molecular cooking, nouvelle cuisine, itty bitty artistic plating. Ben Greeno can. Each flavour on his complicated, intricate creations sang true. The ingredients tasted of themselves, clean, bright, Spring-like, a walk in fresh Nordic air. The food is healthy but luxurious. I asked him if working at Noma had changed how he cooked

“Yes it has. I won’t use exotic ingredients like mango. It makes no sense in Northern Europe.”

Certainly some of the ingredients he’d used such as seabuckthorns were very unusual, I’d never even heard of them before. Not the sort of thing you get down Somerfield.
I returned a few days later to see Ben’s food paired with the creations of a molecular mixologist, Czech Paul Tvaroh of Lounge Bohemia. Paul has an interesting look, a cocktail of Rasputin, Interview with the Vampire, Keith Richards and burlesque magician. You get the impression he doesn’t suffer fools gladly. If you want to go to Lounge Bohemia, you must make an appointment. There are rules: no standing, no suits. He doesn’t want braying city wankers with more money than style rocking up. The strangest thing about this cocktail maker is that he is teetotal. That’s right, he doesn’t drink alcohol. He makes his cocktails by smell not taste. More like a perfumier than a barman. He’s easily the grooviest man in London. 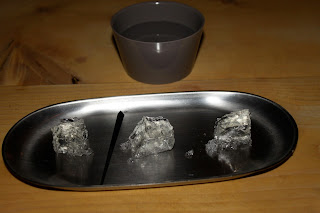 Gin and Tonic
Cucumber gin, quinine cordial and carbon dioxide. A tiny fizz in your mouth and strong quinine. 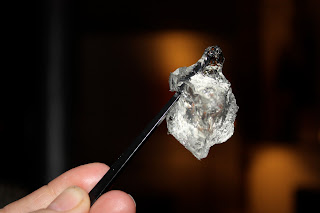 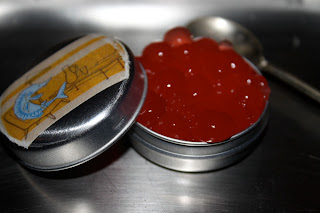 Caviar: mango infused vodka, mango juice, rose syrup. The label drawing is of a sturgeon in a bar. 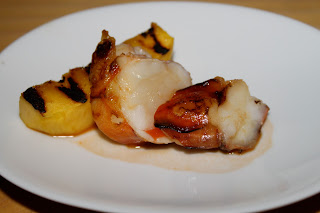 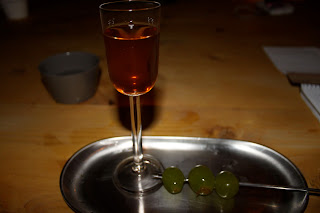 Classic Champagne cocktail served with fizzy grapes infused with brandy and bitters. There was a strong flavour of Maraschino cherries. Matched with scallops, pickled grapes (gorgeously umami like umeboshi plums) and pistachio. 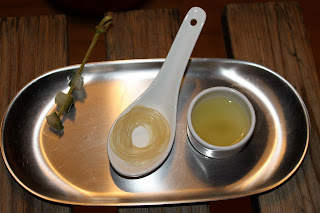 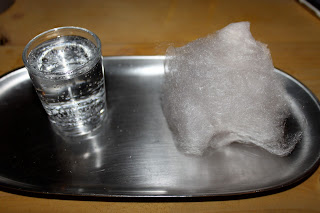 Campari and Soda: campari candy floss served with club soda. This was very unusual, you pop the ball of floss in your mouth, drink the soda and the unmistakeable taste of campari floods through your palate. 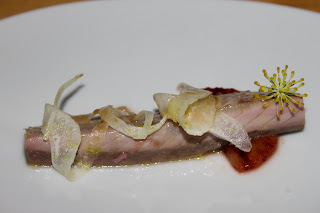 Matched with mackerel, blood orange, fennel and fennel flower (which was divinely aniseedy) 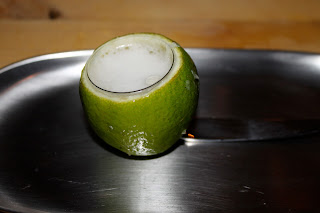 Margarita: tequila, lime juice, agave syrup.
For me, the veggie, this was matched with roast baked celeriac and coriander sprouts. Fantastic. Must copy. 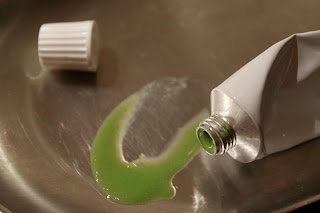 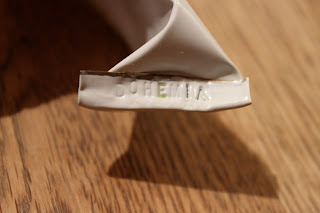 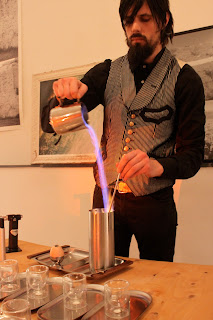 Tvaroh doing his magic conjuring trick at the head of the table: making us believe he’d cracked an egg into the cooking of the following breakfast drink… 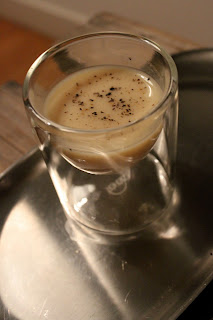 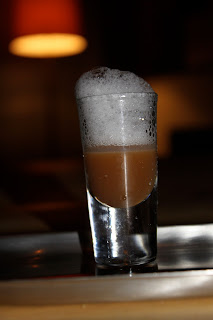 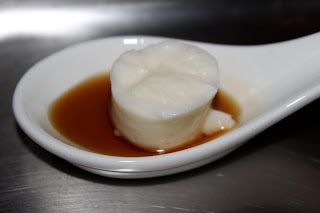 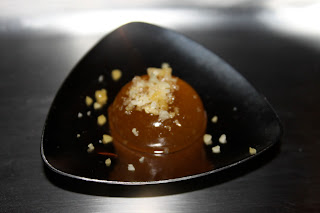 Amaretti biscuits, biscuit vodka, amaretto, pop rocks. I liked this very much. The texture of the pop rocks worked very well. Matched with coffee milk and Amaretto dessert which reminded me and the Belgian couple opposite me of a French tinned custard dessert called Mont Blanc ( I used to love Grand Marnier flavour). Ben used ingredients he wouldn’t normally use in his own cooking to match these unusual cocktails. 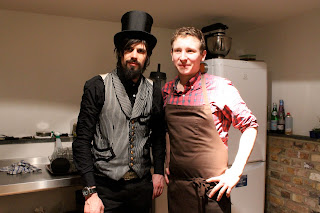 Paul Tvaroh and Ben Greeno
(1) Couverts is French for cutlery. Do I have to explain everything? Doh!
Book for The Loft here
Contact Ben Greeno here
Lounge Bohemia here