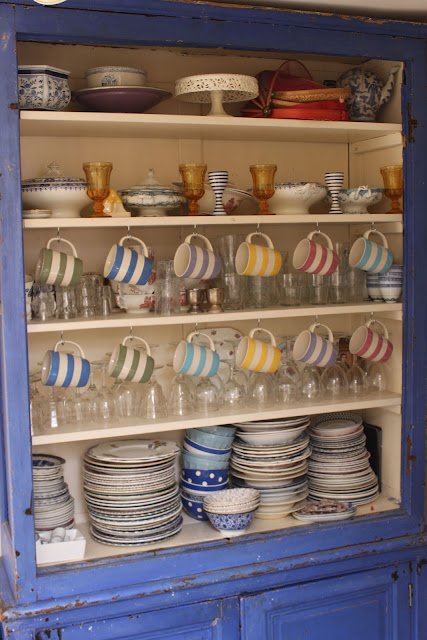 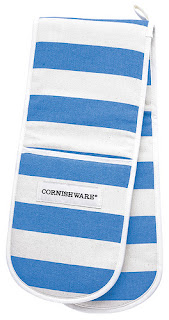 People who follow this blog and who have visited The Underground Restaurant will perhaps have noticed that I have a bit of a ceramic fetish… I’ve been collecting blue and white china for a decade now, mostly from French brocantes and vide-greniers (sounds way cooler than ‘jumble sale’ doesn’t it?) and British charity shops (they don’t seem to have charity shops in France except for Emaus). I suppose that whereas I once used to spend my money on shoes and hairdressing, I now spend every spare penny on my kitchen!
Designs were often from the classic blue and white’ willow’ range, I also branched into the green and pink versions. All the china and glassware is mismatched at The Underground Restaurant, being vintage, but it is shouting at the same volume.
Another of my favourite designs is the classic Cornishware. I once watched a documentary on how they make those classic bands in blue and white stripes, which is not just a case of painting them on, but a complicated process involving craftsmen cutting the bands freehand on a lathe. Famously the blue and white bands are reminiscent of the blue sky and white crested waves of Cornwall. 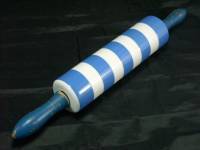 There is something very cheering about Cornishware, it has a vintage appeal that designers such as Cath Kidston have tried to emulate. It’s now a collectors item, some pieces are worth a great deal, depending on the condition. This blog talks about how Cornishware was the “smart, yet thrifty” alternative to bringing out the best china. One day I hope to have a whole shelf of Cornishware jars! Here is the official Cornish blue collectors site.
T.G. Green who made the Cornishware from the 1920s went into administration in 2007, but have started up again with a whole new range. Apart from the classic blue and white, you can also get a variety of shades: moss green, yellow, mauve, pink, pillar box red, reminiscent of seaside bunting. I’m using my mugs now but these are also a collectors item for the future! 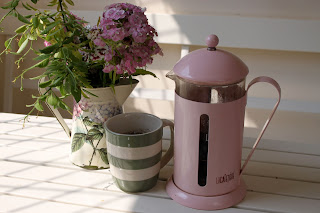 T.G.Green have offered readers of The English Can Cook a ‘Cornishwear’ blue and white striped apron and matching oven gloves (pictured above). All you have to do is comment below suggesting a recipe using a typically Cornish ingredient.