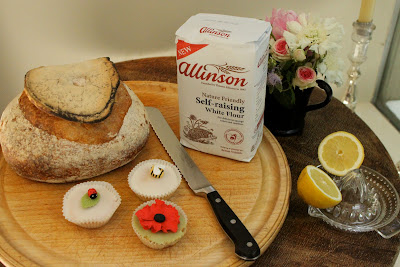 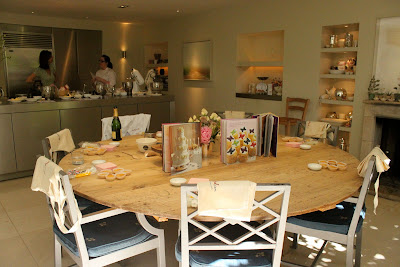 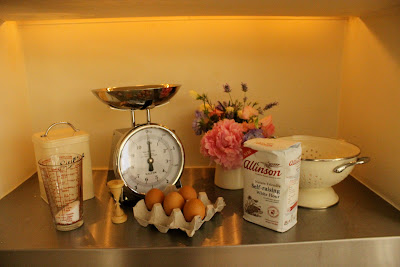 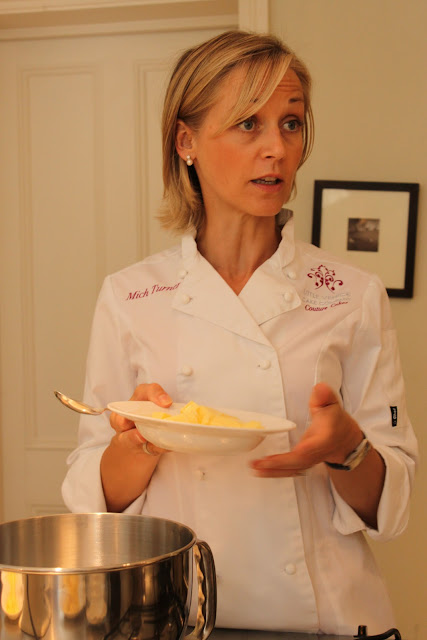 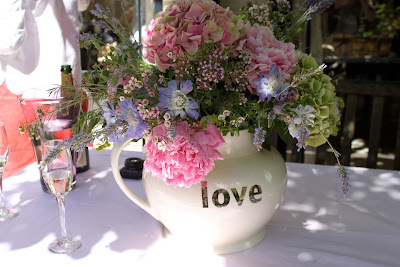 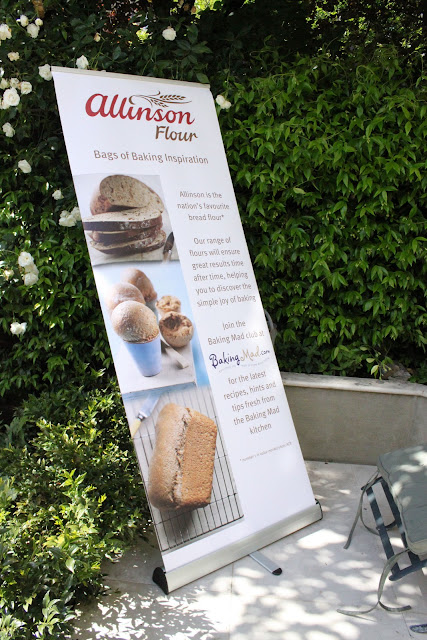 Like the American grey squirrel pushing the native red squirrel into oblivion, the American crayfish decimating the native white claw, the fairy cake, a modest, flat, glacé-iced creature has lost out to the blowsy top-heavy cupcake in recent years. The Dolly Parton of small cakes has dominated our pallid native offering; whole bakeries are devoted to cupcakes and prices have risen as high as the frosting.
But we will fight ’em on the beaches, or at least in the baked goods aisle, England expects! The backlash has begun.
I was invited by Allison’s flour to attend a fairy cake decorating class. They even sent a car! Luxuriating in the back of the sedan I thought, I could get used to this…
We alighted at the poshest and most beautiful house I have ever seen, owned by a woman called Veronica, who possessed the kind of upper-class English beauty that judges would describe as ‘fragrant’. As you entered the hallway, there was a model of a miniature farm, high ceilings, a large vintage chandelier; glimpses of other rooms (oh I would have liked to have looked around!) revealed marble fireplaces and simple but classy furnishings. It was like stepping into a style magazine, ‘Interiors’ probably. We were led downstairs, down creamy marble steps to a wide open kitchen/dining room. The pale wooden table was big and round enough to fit all of Arthur’s knights. Around the room were open shelves with artfully placed displays of retro cookware.
Outside the perfectly judged garden, all cream coloured wrought iron, spiral staircases and casual bouquets, glistened in the June sunlight.
Mich “without a T” Turner, awarded a CBE only a few days previously, was going to be our teacher. She runs the Little Venice Cake Company and has written several books.
At first we are directed to a counter with several Kitchen Aid mixers. Mich starts talking and demonstrating something with butter. We all, press and bloggers, stand there immobile, fazed no doubt by the heat and champagne. I see Mich’s face tense:

“Are we supposed to be doing what you are doing?” I venture.

“Shall we wash our hands?” I continue, being the class goody-goody.

“Yes” she says and moves out of the way of the sink.

We queue up. There’s no soap. We use washing up liquid.
Back at our stations we are instructed to put the butter and the sugar into the bowl of the mixer. We turn it on.

“Higher” says Mich. “You really want to get some air in there”.

The recipe today was:

Mich never uses margarine. Quite right too, full of hydrogenated fats, which the body can’t absorb. Allinson’s ‘Nature Friendly’ flour is milled from Conservation Grade wheat from farms that encourage wildlife. This is especially important to safeguard the future of bees. Mich also recommends Billington’s unrefined icing sugar which gives a caramelised flavour to the icing.
Mich believes the British fairy cake stems from the Victorian era where they used to bake individual cakes in tea cups and decorated with a glacé icing, using no fat. In America, the first mention of a cupcake was in 1828: possibly an extension of their use of cups as a cooking measure rather than weighing, as are poundcakes. They are often crowned with swirled butter creams. Cupcakes became popular because they bake quicker than a large cake, especially important on the wood fired stove of the era.

Now we sat down for our decorating lesson. We are trying to achieve this: 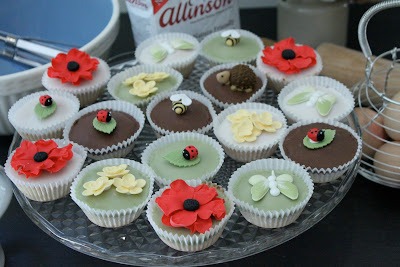 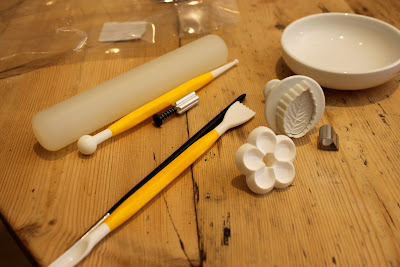 We were given a little kit of instruments to make shapes. 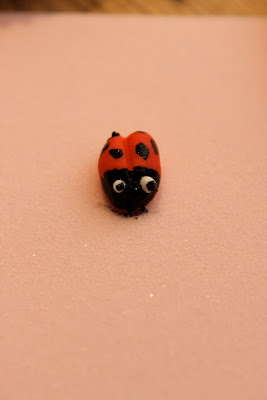 Using ‘petal icing’, you roll a small ball of red dough, make it slightly pointed, carve a line down the middle and using a fine paintbrush, paint the dots and head with black icing. 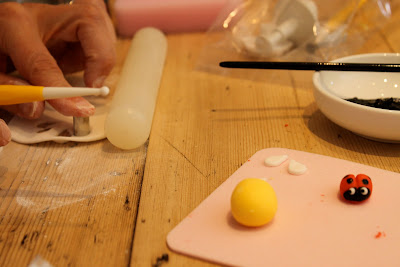 For the bumble bee, we made a sphere of yellow icing, then rolled out some white icing with a teensy rolling pin. We then, with a tiny cutter, cut out wings. We glued them to the ‘body’ with a miniature icing gun of royal icing. 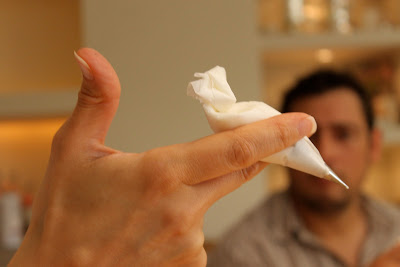 The trick with the piping bag is not to press on the sides, but on the top, with your thumb 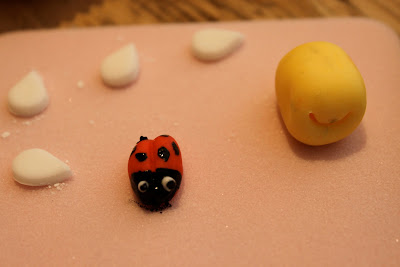 I put a smile on the bumble bee’s face with a curved instrument. 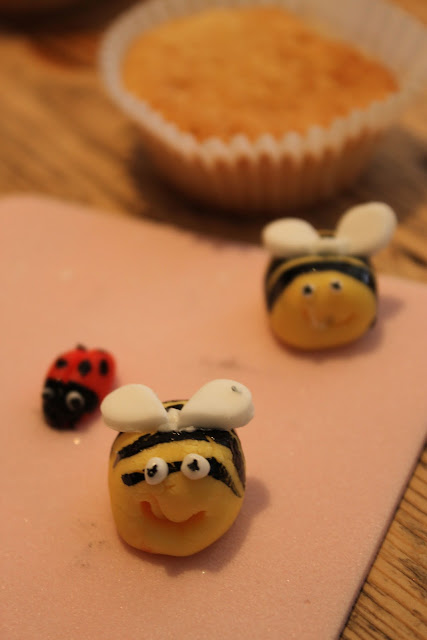 Kinda cute huh? They had personality. 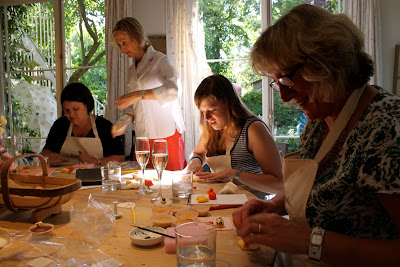 The journalists concentrating very hard. I said to Mich, feeling confident, “I want to make a dragonfly.” The lady next to me piped up “I want to make a horse”. We were flying now, blue sky thinking!
At the end, our cakes boxed up, I said goodbye and, laden with my hessian goodie bag of Allinson’s flour and my own icing kit, head towards the stairs. Unfortunately, when I got to the stairs, a hardly visible cream marble in a pastel sea of good taste, I fell over. When I got home I opened the box and found this: 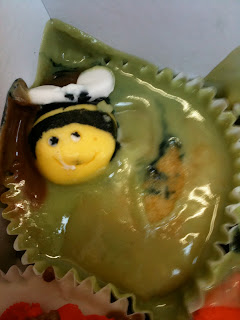 All of the cakes were squished into a corner. I still ate them though, while watching Big Brother.