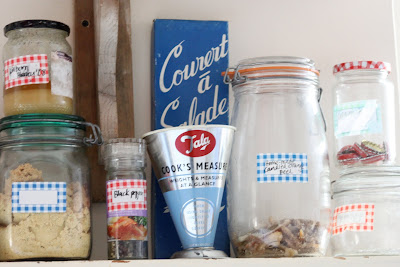 Sticks and cups, am I talking about a tarot pack or cooking measurements?
As any cook searching for recipes on the internet knows, this is how the ingredients in American recipes are measured. America likes to cook by volume rather than weight; they talk of ‘tablespoons’ of butter. Americans assume that the whole world buys butter in sticks and that we know how much it weighs (90g? 110g?). There is the added complication that American pounds, pints and quarts when used, contain a different amount of ounces to the British pound (an American quart is 32 fluid ounces, but 40 for a British, Australian, Kiwi quart). Worn out by the mental calculations, I have to admit an uncharitable thought crossed my mind, perhaps Americans are too thick to use scales? No, but this recent article in the Wall Street Journal states that U.S. cookbook publishers think that for Americans, “weights tend to look daunting”.
Precision, especially in baking, is essential. French baker Richard Bertinet is so keen on accuracy that he even recommends weighing water in grams rather than measuring millilitres in a jug.
Those casual references in recipes to a pinch of salt (1/16th of a teaspoon), a dash (1/8th) of vanilla essence, a smidgeon (1/32th) of spice, a glug ( a very quick down and up pour) of oil are micro measurements not to be taken lightly. Old recipe books always used visual quantities: a hen’s egg (1/4 of a cup), a pullet’s (a hen less than a year old) egg (slightly less) or a walnut of butter.
English cookbook writer Nigella Lawson famously adores, even sells the American system of cups and helpfully provides a conversion scale while the legendary American cook Alice Waters in The Art of Simple food stresses the importance of weighing.
Although I can understand the appeal of being able to picture an amount you might need for a recipe, I agree with Alice: a cup of flour is different depending on the weather, the humidity, the shakiness of your hand that day, the amount of gunk that is stuck in the bottom of your chosen container after the second or third cup. All these factors can affect the success of your recipe. I’ve worked out an American cup (even their cup sizes are different from ours) is 150g of flour, Nigella says it’s 140g and the Wall St Journal article says 120g sifted. That can make the difference between wasted ingredients and time; failure and success.
Another method is explained in a new book ‘Ratio: the Simples Codes Behind the Craft of Everyday Cooking’ by American author Michael Ruhlman who takes the traditional 1-2-3-4 (butter, sugar, flour, eggs) American cup ratio recipe for making a cake and applies it to all cooking. Professional chefs and bakers guard their ratios carefully as secrets of the trade. Ruhlman says that following ratios will ‘unchain you from recipes’ and gives a table: Bread-5 parts flour; 3 parts water (plus yeast and salt). Change this ratio slightly, 3 parts flour, 2 parts egg and it becomes pasta dough.
A reluctant converter to metric in other areas of life, I like inches, feet and yards as they are based on the natural measurements of the human body: an inch is a thumb (in French the words ‘inch’ and ‘thumb’ are identical: ‘pouce’), a yard is the distance between the end of your nose and the fingers of your arm outstretched. However in cooking I use grams and litres rather than the ounces and pounds of my childhood. What system do you use to measure? Are you comfortable with cups? Or do you groove to grams? How do you measure up?