We met at the bouledrome, open only during the season, cheapest drinks on the Cote d’Azure. As old men and young played boules, the Mistral kicked up and blew sand in our eyes. We had to hold onto our plastic cups so that the yellow aniseed liquid didn’t spill. Behind the bar, shelves were crammed with trophies, enormous, some with gold figurines crouched low in a bowling stance. ‘Bienvenue au bouledrome plantourienne’ said the notice on the wall. Turns out Plan de la tour is one of France’s top villages when it comes to boules; competitions are sometimes televised. They’ve even done well in the ‘world cup’… ‘coupe mondiale de petanque’. Plantourienne, I didn’t know a village name could become an adjective. But of course: Tropezienne, Grimaldine, Maximois, Cogolais… the inhabitants of the local towns had names.
Si had broken up with Sarah since I last saw him. I didn’t much care, I didn’t much like her. Typical French bird: didn’t like other women, slim-hipped with a smile like a shark, a face full of European teeth and smokers wrinkles. But she’d clearly suffered in the relationship, propping up Si. As a woman I knew.
He told us the story:
“I was in the middle of France, one of those nowhere towns with nothing to do. She was working in a chain hotel: Formule 1 or one of them, on an industrial estate. We worked different shifts. She worked days, I worked nights. We never saw each other except Sundays. And then she’d want to walk. I don’t mind a walk. One hour, an hour and a half maybe. But she could walk all day. She loved it, had the boots and everything. One day on our day off she took me for a walk round a lake. After a couple of hours I could see we were only half way round. That was it. I left.
I had very little money. I bunked on local trains to get back down to Provence. I progressed stop by stop. It was November, freezing. I’d arrived in Limoges. I was sitting outside a cafe having a smoke. This old woman comes up to me, hunched over, with dyed red hair, in her 70s. She asked me for a light, heard my accent and talked to me in English. After a bit she asked me where I was staying. I said ‘In the station, if the police don’t move me on’.
‘Why don’t you stay at mine?’ she said.”
Si broke off for a minute to say to us ‘How nice is that?’ in his dry Mancunian accent. We all agreed.
‘”Great I’d love to’ Si replied to her.
‘That’ll be 150 euros for the night’ the woman whipped back. ‘But you must wear a condom’.
Si almost choked.
‘Yes I am a prostituée’ said the woman.
‘No thanks love’ managed Si. The woman shrugged and went into the bar. A while later, Si saw her leaving with a man in his 50s. “
We all laughed and wondered out loud. Does she do this every night? In her 70s why does she care about condoms? Isn’t she scared? Talk about entrepreneurial!
We moved up to Bar de la Poste. In the touristy world of the Cote d’Azure, Bar de la Poste stood out as the real thing, a proper neighbourhood bar. Ordinary, even though Johnny Depp and Vanessa Paradis live in the village. Men would enter and kiss each other. When I lived in the South, I went regularly, nursed a kir while the teen was doing her drum lesson. After a few weeks they kissed me too.
Si had got the ‘copain du village’ act down pat. Every few metres he’d slap someone on the back and boom ‘Salut mon pote’. They’d probably discovered him in a few ditches over the years.
Si was a golden boy; tall, handsome, blond, square-shouldered and jawed. He had pretensions to write.  Every so often he’d shyly pull out a few scribbled pages; mostly about waking up drunk with a mysterious girl. We rowed frequently. He didn’t read women writers. So I can name him in this post in complete confidence that he will never read it. But the idea that someone apparently interested in literature would avoid the output of an entire gender shocked me.
Si drank all the time. I accused him of drinking like Bukowski or Hemingway but not writing like them. He annoyed me. All that privilege and looks and blowing it away on drink. 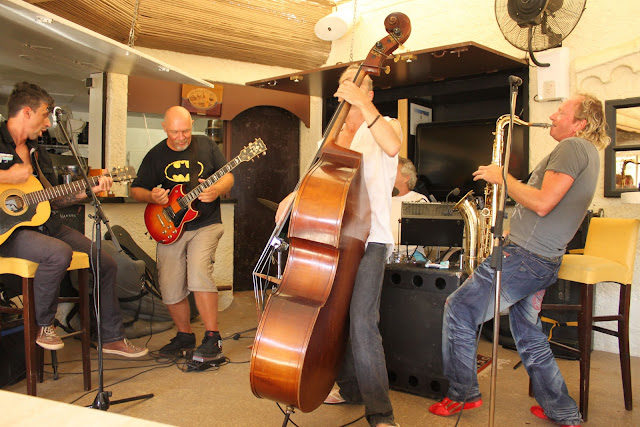 “It’s not like becoming an alcoholic will automatically turn you into a talented writer you know” I’d say irritably.
He had a new girlfriend I’d heard, from the village.
‘Tell me about her?’
‘We’ve split up’ he grinned.
‘When?’
‘Last night’
‘What happened?’
‘I was a naughty boy.’
‘Who with?’
‘Another girl from the village’
We looked at each other. The village is small.
‘So you shat on your own doorstep’ I said.
An older woman came up to the table then and started to shake her head and wag her finger at Si.
He ordered another pint.

On Sunday we made our way to les plages d’embarquement near La Croix Valmer. There are some beach front restaurants serving moules and frites. It being the season, loud eurodisco tumbled across the tanning bodies; tall blue Africans wearing higgedly towers of pink cowboy hats loped from group to group selling beach kaftans; doughnut sellers, boys with summer jobs winked at girls and sung about hot beignets. A little further up the street a bar chugged with rock n roll music. Where do old session musicians retire? The south of France naturellement. A synth player with a long white Zappa moustache, a portly guitar player ripped licks worthy of Bowie and the Stones, no surprise, he’d played for them all. The sax player wore red sneakers and blew until his face was the same colour. A gaunt blue-eyed grey-haired man twanged on the double bass player. They reminded me of The Faces live, Spinal Tap on their holidays, dirty hot bluesy rock n roll. An English guy wearing head-to-toe black and proper shoes, not sandals, sang Jimi Hendrix and Van Morrison. Old ladies wore mini dresses with the insouciance and style of dolly birds from the sixties, varicose veins be damned. A man with long white hair and a red headband nodded. I remembered that the Gypsy Kings were discovered around here by Brigitte Bardot.