youyoumentoring is a charity which creates imaginative projects for disadvantaged young people by providing mentors who are experts in their field.
I was approached by them to host a photoshoot at The Underground Restaurant with the documentary maker Louis Theroux. This ticked all the boxes for me: inspiring teenagers, a London based charity that helps people in the UK, photography (the profession that I trained in) and Louis Theroux, who is pretty damn cool.
Photographer Richard Bailey was the mentor on this occasion with three youngsters, George, Carrie and Lauren. I was highly impressed by their portfolio of work, which included some piercingly accurate portraits of Glenda Jackson, and they enjoyed looking at my exhibition of black and white archivally printed analogue (yay pre-digital!) photographs of my travels. 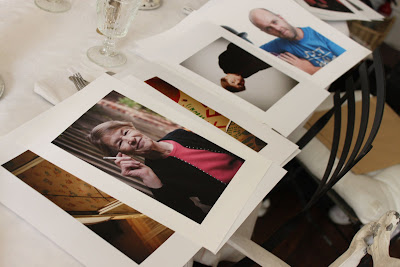 Louis Theroux was charming and obviously interested in food; he visited Noma over a year ago before it was well known. We discussed Morrissey’s latest controversial interview in The Guardian.The Teen loves Morrissey, Louis was surprised. He was thinking of doing a documentary on Morrissey and all of his office said that young people weren’t interested. Wrong! I hope he’ll reconsider.
Everybody enjoyed the focaccia bread shots that I turfed, steaming, from the Aga. The young photographers were inspired by the setting and got some great portraits of Louis Theroux. 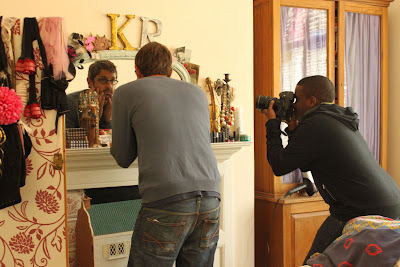 George getting up close and personal with Louis 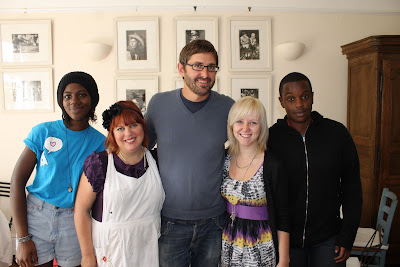