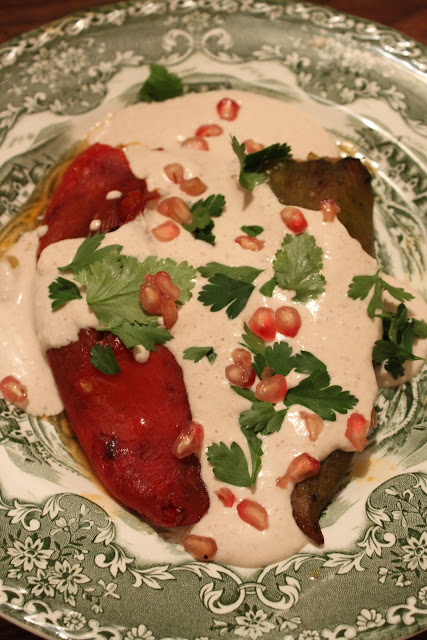 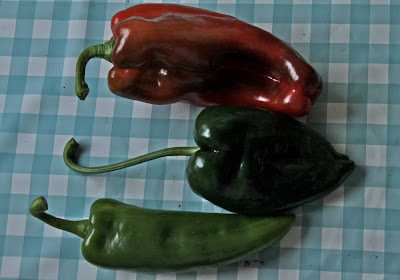 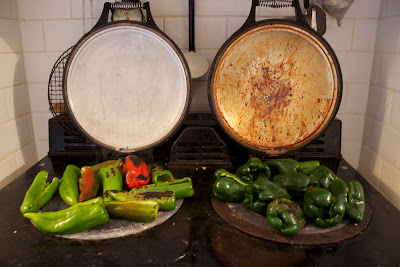 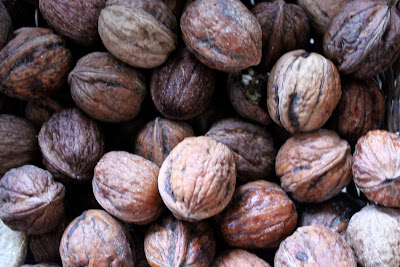 As I spent the tenth hour cracking and peeling wet (very fresh, brought over from Paris in my handbag!) walnuts, yes you read that right, peeling the skins, digging into all the little crevices and stripping the brown skin off walnuts; and then the three hours roasting and and deseeding poblano chilli peppers, I had time to think of a response to a question a reporter asked me a couple of days ago “What are you doing? What is this all about?”.
I’m not trying to be a restaurant I told him I’m not trying to cook restaurant style dishes.
Most of my food is influenced by movies, books, stories people have told me, journeys abroad, mythology. Last night’s dish, chile en nogada, I heard about in the movie ‘Like water for chocolate’. I’ve never seen it in a restaurant, on a menu, here. It’s a family dish, meant for special occasions, such as the 16th of September, Mexican Independence day. It’s colours, the green of the pepper and herbs, the white of the walnut sauce (hence the skin peeling), the red of the pomegranate seeds, represent the colours of the Mexican flag.
I obtained the peppers from the South Devon Chilli farm; poblanos are grown from July to November. They had only eleven, so I also had other mild chilis such Joe E Parkers and Corno de toros. Actually I could have done with a slightly hotter chile. I want heat somewhere between a poblano and a jalapeno, ideally.
I made a cocktail with Cava and the delicious home made elderberry cordial, sold by Anna Mae’s Smokehouse at The Underground farmer’s Market accompanied by olives from The Deli Station.
For starters I soaked then roasted corn in it’s husk with golden cobnuts and baby leaves, a lime and mustard dressing. 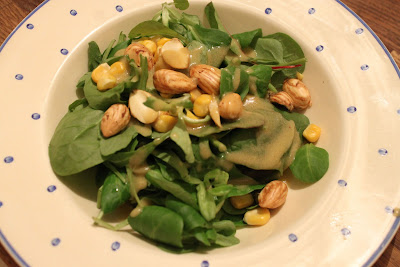 The cheese boards were spectacular, with several cheeses brought direct from Paris, the Brillat Savarin a particular stand out and some Italian cheeses, a white truffle ‘Ricetto al Tartufo’ and another cheese that looks like a loaf of bread ‘Testun del Fen’, from The Deli Station with spicy tomato chutney by Yum Yum Chutney (again both bought at The Underground Farmer’s Market)  and my own home made rye crispbreads. 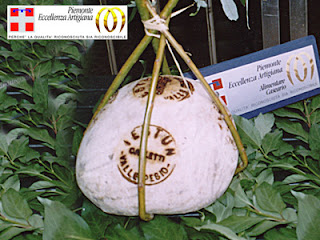 Testun Del Fen means ‘big head with hay’. The producer is located in Piedmonte North West, Italy. During the war the producer used to hide the cheese from the Germans and bury it in hay which is why it has a tusk of hay at the top.
The Ricetto al Tartufo is a 70% goat and 30% cow’s milk cheese with pieces of whte truffle which are dropped into the raw milk before the cheese is processed.

The tables were decorated with Michaelmas daisies from my garden (will grab pic later), the 29th of September is Michaelmas. Referring to my previous blog post on Harvest festival at school, my junior school in Highgate was called St. Michaels. I started up a student newspaper there with some friends, calling it ‘Michaelmas daisy’, decorated with drawings of the pale purple flowers. I must turf that out!

Dessert was an Indian rice pudding, a perfect Aga dish:

300g basmati rice, cooked (although I may use a pudding rice in future, I’m not sure I liked the texture of the basmati, too long and thin)
50g green sultanas
50g almonds
50g unsalted pistachios
100g brown or palm sugar
600ml double cream, reserve half  to add at the end)
1 litre of milk
2 bay leaves
10 cardomoms
1 teaspoon of cinnamon
1/2 teaspoon of nutmeg
a pinch of vanilla salt

Put all of the ingredients into a baking pan, cover with tin foil and cook for two hours in the simmering oven.
Then uncover and if you wish, divide into ramekins, leaving enough space to divide the other half of the double cream between the ramekins. Put in the roasting oven for 20 minutes until the top is brown and bubbly.
Decorate with some gold or silver leaf (I forgot last night!) 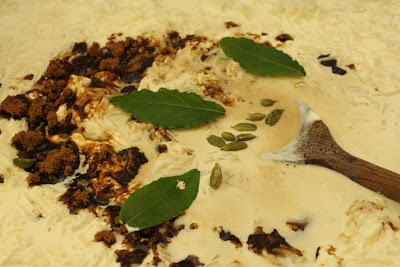 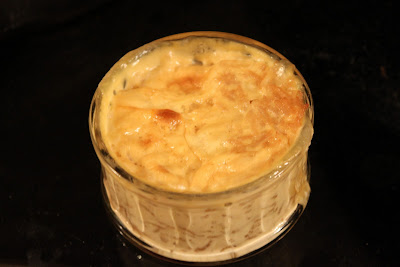