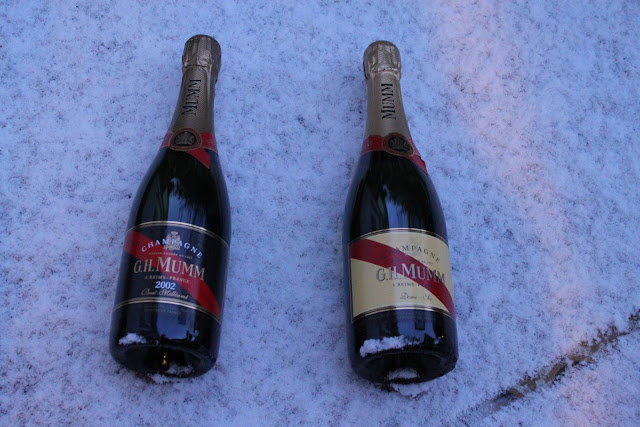 Most food bloggers don’t know much about wine and I’m no exception. My parents gave us all wine as kids on special occasions and my dad had a stage, seemingly a male rite of passage for those entering into middle age, when he carried about the Robert Parker guide whenever we visited restaurants. But that’s about it. I don’t like drinking alcohol without food and I’m a cheap date. Three drinks and I’m fluent in several languages and start fancying everybody in the room.
Champagne tends to form the bookends of a meal: in Britain we have it as an aperitif, while in France they often drink champagne with dessert using the breast-shaped ‘coupe’ glass (think Babycham) rather than the traditional ‘flutes’.  Champagne should only be drunk from a very clean glass, it’s bubbles will evaporate more quickly otherwise. Another thing: you know that deep trough, known as a ‘punt’ in the bottom of a champagne bottle? You are supposed to put your thumb in there, using it to steady your hand as you pour whilst holding the bottom of the champagne bottle. The myth that, the deeper the punt, the better the champagne, is untrue.
Probably my favourite weight-loss diet was the two weeks I spent at the Cannes film festival working as an analogue photographer while I lived on a binary regime: champagne and the odd canapé. The lard simply rolled off as I clattered bare-legged (never missed a chance to tan my legs even when papping*) up and down the croisette, bunking into starry parties, lugging about my Nikon and Metz flash.
We don’t think of champagne as a food matching wine. The champagne region is poor; the land, chalky and arid, supporting few crops, in fact the area is unique in France for having almost no typical foods. Two foods that are famous, fortunate, for champagne matches particularly well with cheese, are the local cheeses Chaource and Langres. But this infertile soil is perfect for vines. The land in champagne is now some of the highest valued real estate on the planet. A kilo of grapes from champagne is worth £5 whereas in the south of France, they are worth as little as 50p.
Another misconception I had was that champagne was ancient. A little thought would have revealed that of course the technology to produce a drink with bubbles, although invented by an Englishman (yes!) Christopher Merret  in the 17th century, only came about in the 18th century. Prior to that, the acidic flat wines in the champagne region were not highly considered. Another surprise, historically, sweet white wines, such as the much derided Liebfraumilch and hock were very popular from the 15th to the 19th centuries.
Champagne comes with different levels of  ‘dosage’, or sweetness. These are Brut and Demi-sec. Within the ‘brut’ dosage there is ultra and zero brut with even less sugar for hard-core types.
The British have always loved champagne: we are their number one market after the French. Next is the USA and the Germans. But coming up fast on the inside track are China and India not only for champagne but for all wines. My mate, who works at a top British wine importers, tells me that the Chinese were so desperate to buy the vintage 2008 (8 is a lucky number) that special labels were printed in Chinese. This wine importer then bought back the 2008 vintage en primeur wines from their customers, mostly bankers who, if they bought a case for 2k they sold it back to the importers for 12k. Quite a profit for two years and further proof that if you have money, you can make more very easily. Chinese wines themselves are improving rapidly, cloned vines are being planted in the Asian continent. I tasted one last year. At first you think ‘mm not bad’ but the after-taste is like sewage. But in a 100 years time, my mate tells me, Chinese and Indian wines will rival European ones.
So in a rapidly expanding market, with only a limited amount of land at present designated as champagne(although surrounding areas with the same soil and climate are trying to expand the denomination), it’s a winning proposition.
Like me, you probably thought the word ‘vintage’ meant ‘old’. In fact it’s the year that a wine was produced. Many champagnes are non-vintage (NV) which doesn’t mean they are crap, it means they are made from a blend of several years. One of the reasons that champagne is expensive is because they hold back so much of their production each year to ensure consistency of taste whatever the weather. 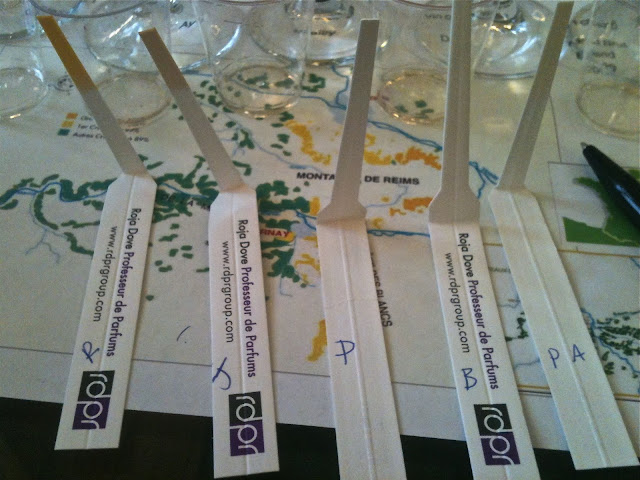 Much of this information I garnered from attending a champagne assembly in November at Bethnal Green town hall. Normally wine tastings are people sitting around being told that a particular wine has ‘caramel’ notes or smells like recently skidded tyres. This conference was something different: hosted by Perrier-Jouet and GH Mumm, two of the most important champagne houses, it held workshops on the psychology of luxury, tea matching, smell and chemical food matching using a machine known as a ‘gaschromatograph’
The best workshop was led by a tall man with a hypnotic blue stare dressed entirely in black: a jet and sequin encrusted shirt, and a velvet jacket with a large bat shaped broach on the lapel and elaborate diamond cuff links. A Liberace of perfume.
Scanning the room, he introduced himself as Roger Dove, who runs the Haute Parfumerie at Harrods. After announcing dramatically:

he asked us all to close our eyes and do a ‘synchronised sniffing‘ of sticks of paper dipped in essential oils.
Jasmine, found in over 80% of women’s perfumes, is the most expensive at £32,000 a kilo. The average time in the perfume industry to create a new perfume, he stated, was three weeks. His perfumes take six months to two years to develop. Roger had us all in the palm of his hand: we were inhaling rose and musk and drawn in by his mesmeric verbal journey, transported back to childhood, to mossy forests, kicking over logs…

“This smell rises high, is lively, moves up the nose: scents have texture, we use movement words to describe odour” he continued.

At the end his assistant came over and handed me Roger’s card: of course he was not called Roger but ‘Roja’.

On New Year’s Eve I will be creating a meal matched with five different champagnes from GH Mumm. I will explore this menu in another blog post.

*papping: being a papparazzi photographer.