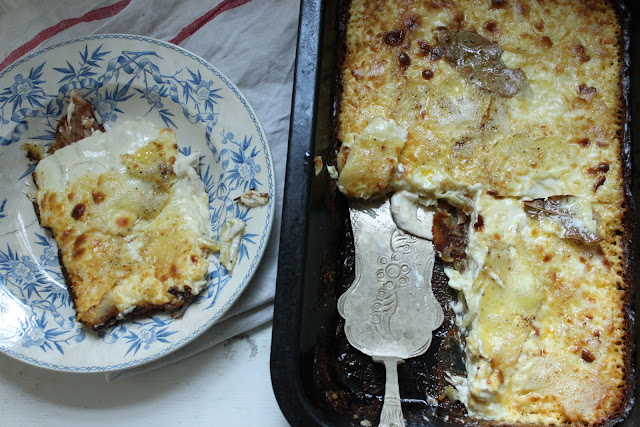 The French celebrate this humble tuber with a range of regional potato dishes exotically named; aligot, tartiflette, truffade, roigabrageldi (Alsacian), mousseline (mash), boulangeres, fricasée, duchesse, dauphine, etouffés (Vosgien), soufflés, frites (naturellement) and then we have the potato gratins; Dauphinois, Savoyard, Anna.
Aligot and truffade come from the Auvergne region in the middle of France; a place where few tourists visit but many French go for their spas, ‘to take’ the volcanic water (paid for by the French state on prescription). In the street markets you will find stall holders with vast cast iron frying pans, repeatedly scooping the aligot, laden with butter and garlic into a finely textured dense purée.
I served truffade on Saturday night, each table had a scorching hot frying pan with cheesy potatoes. Of course the burnt bits were the best and I had several visitors into the kitchen, stray fingers dipping, trying to grab a few more shards from the bottoms of the pans forming an orderly queue for washing up. Food hygiene be damned, my guests wanted the crispy bits!
Traditionally truffade is served with Tomme, a firm regional cheese, but, as Elizabeth David says, a crumbly cheshire cheese could make a good replacement. I used slithers of truffle cheese, brie and plenty of cheddar and some fried onions. It’s also usually made with lardons but I replaced these with a side plate of home smoked salmon from the Eastend smokehouse, a stallholder at The Underground farmer’s market.

Parboil the potato slices in salted water for six minutes. Then drain, taking care not to break them up too much.
Melt the butter in a wide cast iron saucepan (ideally) and cook the onion slices until soft. Add the garlic and bay leaf.
Add the potatoes to the pan, cooking slowly until the edges begin to brown. Then the handful of fresh herbs. Lastly add the slices of cheese, mix gently until all is melted.
Serve with smoked salmon, a salad (endives) and a crisp white wine.

If you really like potatoes read this account of a man, Chris Voigt, who works for the potato industry in the United States, who lived on nothing but potatoes for sixty days. Part One and Part Two.

It’s great when cooked on a fire too, sorry I seemed to have forgotten to take pictures of my truffade, will rectify soon.
Saturday night’s quiz by Marcus Berkmann was hotly contested with Guardian writer Catherine Phipps leading her winning team, dropping only 3 points out of 30 along the way. She brought gorgeous baby Adam with her and he slept peacefully in a cot in the bedroom.
This is another advantage of home restaurants, you can bring your baby!
As the main course was so cheesy I reversed my usual French style course order of cheese then dessert and served the cheeses at the end. I got several of the goat’s cheeses from an event called ‘Ready Steady chevre’ held at Divertimenti, a cookery shop in Marylebone, London.
I’m a fan of goat’s cheese, always wanted to marry a goat farmer but heard the suicide rate is quite high (lonely, not much money, never allowed to go on holiday as turning cheeses over and looking after goats every day) so probably not a good bet.
All profits from this meal are going to wikileaks, as I support free speech. Especially after the ordeal that my daughter went through last Thursday at the demonstration against the rise of Student fees. She was held in a ‘kettle’ for eight hours, the last three hours on Westminster Bridge, an incredibly dangerous tactic by the police. Schoolchildren were squeezed so tightly on this bridge that they could not breathe. My daughter’s account is here. Parents who went down to free their kids, pleading with police to let them go, were then ‘kettled’ themselves. I called the police to complain about the police. The reporting on these demonstrations has concentrated on the tiny minority that become physically violent and police injuries, ignoring the injuries sustained by protesters. The coalition has succeeded in politicising a new generation, previously thought only interested in facebook and video games. This generation are the sons and daughters of the punk generation, of course they are not going to sit down and take this assault on their future without a fuss!
The coalition, like Labour before them, are only interested in helping children born under their administration.