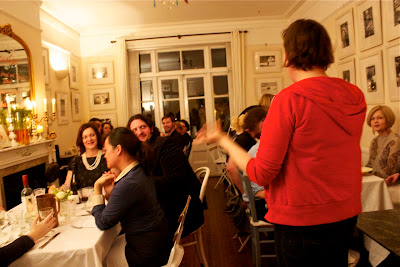 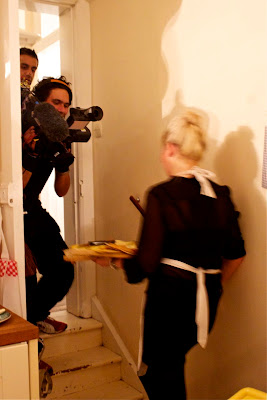 Camera crew filming Lenny and the cheeseboards… (great name for a group?) 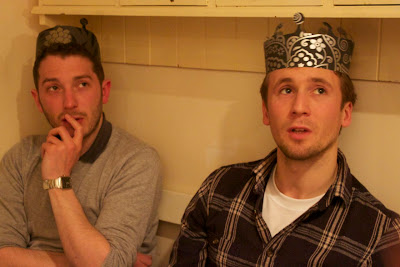 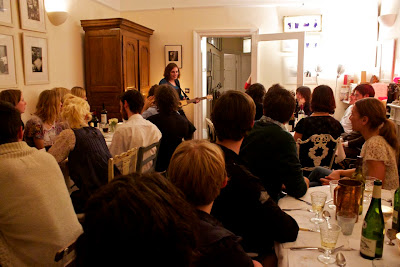 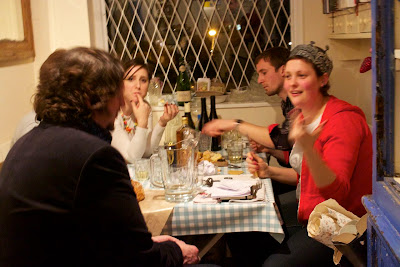 Chef’s table of comedians…
No pix of food I’m afraid…can’t do everything!

I can get a little stressed before some of my events. The bigger and more complex the event, the more stressed I become. It’s almost like stage fright. I love comedy nights at The Underground Restaurant but cooking for the main room and having a sort of chef’s table in the pantry, replete with the nation’s quickest wits, requires organisation and a cool head.
This week I got word that The One Show with Jay Rayner, the Jay Rayner, uber famous and respected restaurant critic, were coming down to film. This is a great opportunity and hopefully will bring supper clubs to an audience outside of the London food blogging twitterati whilst, at the same time, spread the word about my forthcoming book Supper Club: recipes and notes from The Underground Restaurant (out March 31st). The BBC aren’t allowed to advertise so I was desperate to wedge in a mention of my book. I had a copy of my book under my arm as I stirred the soup…totally unnatural but needs must.

It being St. Patrick’s Day, I decided upon a simple but hearty Irish influenced menu:

The person who was supposed to help me prep didn’t turn up so I did all the prep on my own. By the time my front of house team arrived at 6pm I was a little frantic, sweaty, and covered in flour. I did a quick spritz with the deodorant, changed my dress, and rubbed on some lipstick in order to be presentable for the camera crew. They’d just come up from Kensington where they filmed legendary chef Pierre Koffman who is starting his own Michelin starred supper club.
Josie Long assembled a fantastic crew of comics: Isy Suttie of Peep Show, Jon Richardson, Tim Basden of The Cowards and The Behemoth.
Among the guests I had seven vegetarians (five of which were a surprise so I whipped together a last minute ‘store cupboard special’ of of baked beetroot, Puy lentils, chili halloumi, roast tomatoes, pine nuts, oak smoked tomatoes with pomegranate syrup on a bed of rocket), two coeliacs and two with serious nut allergies.
Of the comics I only saw a little of Isy Suttie who was really funny. At the end I sat and chatted with the comedians, sharing a bottle of smooth Bushmills Irish whisky.
Jay Rayner is very tall with a curly glossy brown mane and a warm humourous manner. He put me at my ease for the Aga-side interview which was fortunate as by the time we came to film it, it had been a long day and I was not as sharp as I usually am. I tend to look up to the side when I’m thinking of an answer and that’s an annoying tick on film, it gets worse when I’m tired.
We did of course all ask whether Matt Baker was being deliberately provocative when he asked David Cameron ‘How do you sleep at night?’. They said the interview was running late and that’s why the question was asked in a rushed way at the end.
The poor cameraman fell over at one point when moving backwards while filming a waitress, he then forgot his bag and made me jump at 2 am when he rapped on my bedroom window! But this film crew were not too intrusive, and Jay soon got all the guests joining in as crew, holding the sound boom etc, while they did vox pops (little interviews with guests).
It was a great evening…no need to be nervous at all…but you don’t know that until afterwards!
Next comedy night, probably June.

Upcoming events:
March 31st: publication of my book!! Pre-order. Perfect gift for Mother’s Day on April 3rd.
April 2nd: Chocolate menu with Trish Deseine.
April 29th: The Royal Wedding Banquet Banquet
May 6th: The Underground Night Market   Fantastic kletzmer band She’koyokh are playing as is Tom Baker on accordion. I’ll be selling and signing my book. Bring cash to eat hot food after work, enjoy the cooking demonstrations, stock up on food for the weekend and buy crafts as presents or for yourself.