As my publishers have declared that I have two award winning blogs, The English can cook and this one, on the fly leaf of my book, well I guess I better start writing something here again. I haven’t actually won any awards at all and I don’t allow all those soppy pretendy awards with cuddly bears and flowers ‘Gee I really like your blog’ badges.
I was invited to Trishna in Marylebone for a wine, beer, cider matching meal with Indian food.
Like Chris Pople, who I was sitting next to, I’m often a bit dubious about posh Indian restaurants but I have to say this one made me think differently about Indian flavours and cooking techniques. They have a new chef/owner, Karam Sethi, from North London, whose mum and dad were accountants. But, in a fit of bohemian rebellion, Karam decided at fifteen to be a chef. He’s spent a few years in Delhi at top restaurant Bukhara and I’m sure this informs his fresh approach to Indian food.
We ate in a dark room in the basement. It was like a star chamber of food and wine bloggers.
This tasting was brilliantly led by Winechap, one of the Evening Standard’s 1000 most influential Londoners. Like most wine bloggers, he’s rather eccentric with his bushy beard, plucked eyebrows and cravat. Every so often he’d pronounce things like “Spain is the new Portugal” and “No one ever goes to the Tate to eat the food”.
We tried some great wines, for instance a £150 bottle Riesling (‘Uhlen’Spatlese trocken Knebel, 2005) that I could drink all day, from a family vineyard, steeply terraced. I don’t even like Riesling so it was a pleasant shock to see what it could and should taste like. We also tentatively sipped some Indian wines: a Shiraz from Sula vineyards (north of Mumbai), 2009 and a Chenin Blanc, again Sula vineyards, 2010, that were…drinkable. Not terrible. Unlike a bottle which, desperate for a drink, I had in India in 1987, a clash between meths and sherry.
I had my first Tokaji which I’ve wanted to taste ever since I saw the film Dean Spanley where Sam Neill played a dean who, every time he drank Tokaji, reverted to a previous life in which he was a dog. The wine was resinous and a good match for cardomom but I didn’t bark.
I enjoyed a Gewurztraminer ( ‘Granos Nobles’, Luigi Bosca, Mendoza, 2009), one of my favourite wines while being simultaneously light and sturdy enough to stand up to subcontinental flavours.
Ultimately though I’ll always prefer lager to wine when it comes to Indian food. We tried Erdinger and Zatec. There were probably others, but I’m a cheap date.
I would urge people to visit Trishna, some really superb cooking going on there. I’d go back and pay. They also have a ridiculously cheap lunch deal for £10. 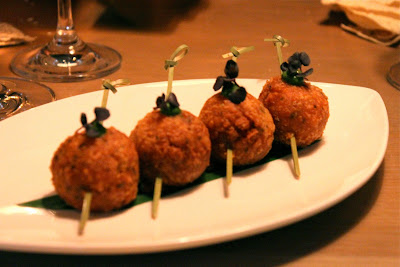 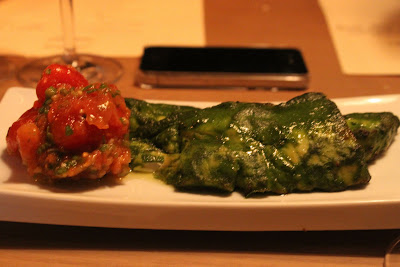 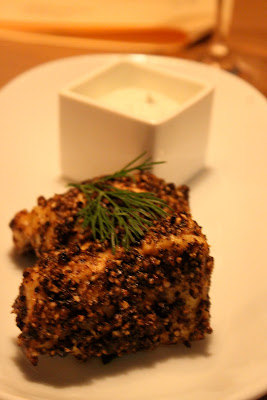