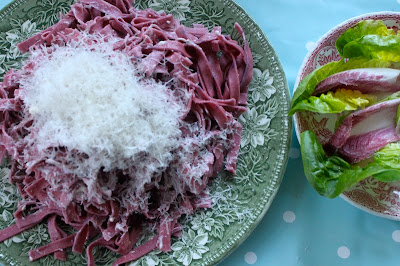 Blueberry noodles from France with creme fraiche and parmesan. 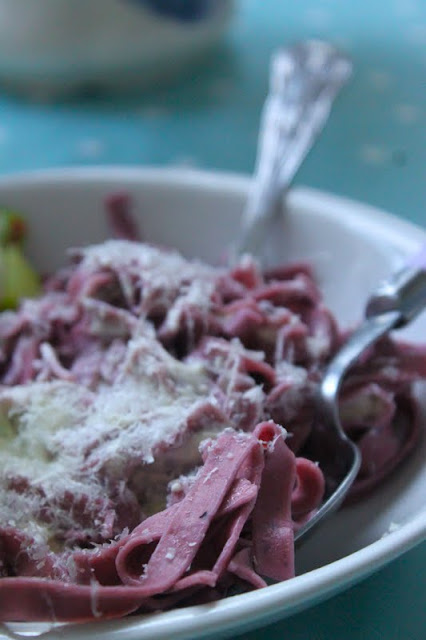 When my daughter was little she was a very fussy eater. One evening I attempted to give her something unusual like say, vegetables, she scrunched up her three year old face and asked, and she could barely talk: “Can I have the green dinner or the red dinner?”
It took me a while to work out what she meant: but it was pasta with pesto or pasta with tomato sauce, I felt slightly ashamed. I realised how limited my cooking had become. Almost every night it was red dinner or green dinner.
Last night I made her purple dinner. She’s still pretty fussy. So I covered up her eyes before giving it to her, but she peeked. “I’m not eating that!” She tasted. “I’m only eating it because I’m starving. You are starving me.” she announced dramatically.
The teen is revising for her As level exams. (If I call them A levels I get in trouble “You don’t even KNOW WHAT EXAMS I’M DOING!  THAT’S HOW LITTLE YOU CARE!!!”)
This consists of hours sitting in the living room, looking wan, staring at her laptop with a packet of digestives next to her. But on actual exam days, I do my bonne maman bit, rise early, and make her a high protein breakfast: a cheese omelette, or smoked salmon and scrambled eggs, a glass of juice and some milky coffee. She hates eating breakfast but I insist on those days “Brain food!” I declare.
The rest of the year I’ve given up the battle.
I don’t get up early before she goes to school anymore. I did it for years: the eye-watering school run. I used to spend almost three hours a day in the car taking her to school and back. She went to a French primary school in Kentish Town that was 45 mins away. Every morning we’d get into my old banger, a wreck I’d driven back from France which leaked rain and smelt of mould, so nobody wanted to share the run with us. I’d do the worst drive in London: across Hampstead at school run time. The narrow roads were glutted with yummy mummies in four-wheel drives, who didn’t know the length and width of their own vehicles. The back ways of Hampstead echoed with shouting velvet hairbanded mothers amidst a Boden catalogue of uniformed kids strapped in the back. Hell hath no fury like a middle class mother late for prep school. 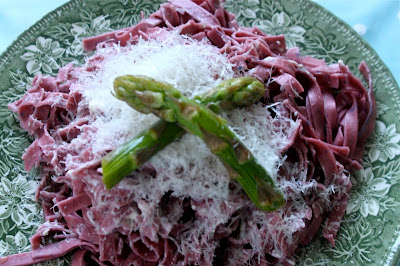