While soap stars and fading actors have been hogging the cookbook shelves and cooking telly for the last few years, conversely, the popularity of food programming seems to be filtering through to soaps like Eastenders. Ian Beale has long been the fish n chip king, the Massood family manage the curry house, a succession of owners have run the cafe and there was even a moment when Kat Slater and Alfie Moon ran an ‘underground pub’. But there are encouraging signs that food is beginning to be taken seriously. In January, Jane Beale, Ian’s doormat ex-wife was offered a job as a sous chef at a top restaurant in Wales. Her previous background in food amounted to cooking fish and chips and pub grub. Her training for this sous chef job consisted of a sequence in which Ian and his kids sat at a table and made a series of unreasonable demands, attempting to reproduce the strain of working in a top restaurant, while Jane tried to keep up, mopping her brow with stress, in the kitchen. There was talk that she would eventually move to Paris and open a restaurant there.

Beefcake Ray obviously feels passionately about food; last night he tried to give Bianca a cooking lesson. Bianca was dubious about spending money on olive oil as it “costs twice as much and you can’t even taste it”; she laughed at the idea of adding herbs – “frying grass?” – and garlic: “I’ve been to France and they stink”.
Bianca’s kids didn’t like Ray’s fresh home-cooked food: “We prefer chicken nuggets”. “Now I know how Jamie Oliver feels”, sighed Ray.

Is this really symptomatic of how working class Britons feel about food? We love spice – curry is our national dish. Food shows such as Masterchef and the Great British Bake Off are incredibly popular but the producer of Saturday Kitchen was philosophical as he told me that “people are watching food but not cooking it”.
Jean replaced Ray as lunchtime cook yesterday in the Queen Vic and did her famous ‘sausage surprise’ which appears to consist of heaps of fried onions, layers of baked beans, mashed potato, topped with sausages. Has anyone ever cooked this? Dot makes a decent cake (here is one of her pudding recipes) I believe, and her retro style is bang on trend. Will there eventually be an Eastenders cookbook? Would better food on soaps improve diets? Would Jamie’s food revolution be more effective written into the script of ‘Stenders and Corrie? 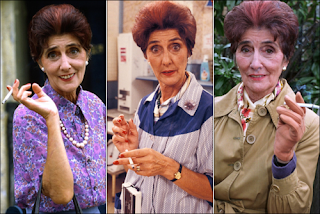