Chef Chris Massamba has a very London story; originally from the Congo he moved to Hackney and was inspired by the food of the other immigrants to the East End (Turkish, Chinese, Vietnamese, Bangladeshi) and this informed and influenced his native African cuisine. Concerned with the provenance of food, healthy eating and animal rights, Chris became not only a vegan but it’s militant wing: raw vegan.

Raw foodists believe cooking is harmful. Heating a food above 40 to 50 degrees, they say, destroys the digestive enzymes, removing the healthy vital components. There are many different kinds of raw food diets spanning veganism (the most popular), fruitarians, sproutarians (only eat sprouted food), juicearians, and, really bizarre, raw animal foodists who only eat raw eggs, meat, fish, seafood and raw dairy. Academics debate whether the big brain of our species is down to the development of cooking or the addition of meat and fish to the human diet. (The first evidence of humans using fire to cook occurred about a half a million years ago in China). 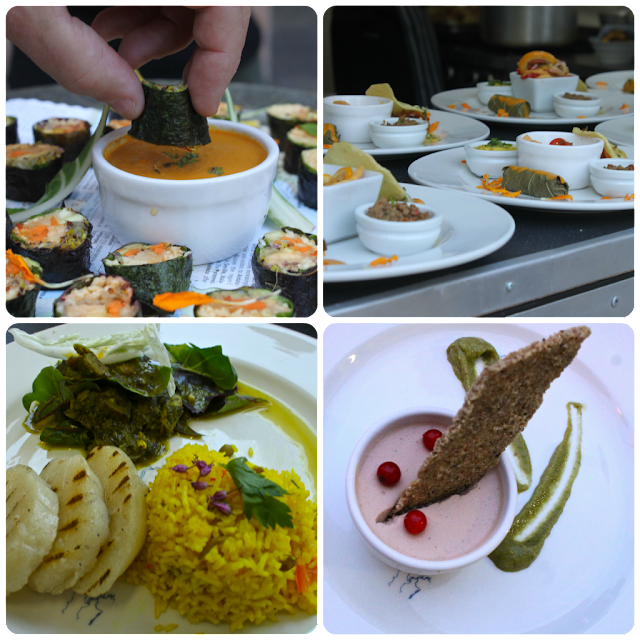 Some of the dishes, I’ll be frank, were a little challenging to my palate, it was all so new and off the scale in terms of food experiences. Raw hummus for instance, tastes …green….with a slightly bitter aftertaste. The raw baba ghanoush grew on me. The African nori rolls were fantastic, as was the marinated banana plaintain. The only cheaty bit was the rice pilaff which we cooked. Normally raw foodists would only soak the rice, in fact any grains, to make them digestible, rather than cooking them.
Chris requested vegan wines with the meal. Yes there is such a thing, for many wines contain fish scales and blood. I didn’t know how hard-core the guests would be so I thought it best to be on the safe side.
Vegan chefs use a Vitamix machine and other specialist equipment such as dehydrators (which dry food) to process raw food. When I tweeted that Vitamix had lent Global Feast a couple of their machines, there was much jealousy and interest from chefs. How is the Vitamix different from just a blender? I’m not sure yet, I will find out as Global Feast progresses through the world cuisines, but it can grind seeds, create smooth sauces from anything, make soup and conversely, ice cream.
This melting pot of cuisines, one of the more positive legacies of Britain’s colonial past, is a running theme throughout Global Feast, which is why it is a true celebration of London, during our turn to host the Olympic games.
Another highlight of last night, was the delivery from The Fresh Herb Company who have sponsored our fresh herbs. We are going to be using a huge range of fresh herbs as possible throughout the run, I’m a great believer in ‘greening up’ a dish. Fresh herbs transform any food; I remember when people thought it was acceptable to add dried parsley, generally a sticky dusty pot found in the back of a cupboard, to food rather than scissoring or pinching the leaves onto the food.
Herbs are also decorative: we used some of the pots from the Fresh Herb Company to create ‘forests’ and ‘jungles’ on the table. This was a pleasure for the eyes and the nose, the scents and oils of mint, basil, thyme and oregano wafting over the worldscape.
Book for tonight’s Mediterranean night !  (with the Italian supper club and Cinzia Ghighoni from the table cafe

Book ahead for other nights.