So she’s gone. The teen is now living in at university in York and I’m alone. The house creaks, dust smotes swirl slo-mo in the still air, there is no music or Dr Who or any of her other interests, humming in the background.  I have no one to kick out of bed in the morning. No one to huddle around the Aga with over a cup of tea. Nobody to tell me I’m old, out of date, sexist, racist, living in the Victorian times.
I won’t dwell on it, I promise myself, I will get out and about. Fortunately this week I’ve been to a couple of intriguing food related events.
Faviken is the restaurant of Swedish chef Magnus Nilsson, which I’ve been wanting to visit for a while. Isolated in the sparsely populated area of Northern Sweden, nestled within some pine woods, is his tiny 12 person restaurant which, like that other distinguished Scandinavian trend setting restaurant Noma, relies on local produce and game.
On Tuesday night, myself and seemingly all of the food world, were invited to the Swedish embassy (who are making a huge effort to reach out to foodies) to meet Magnus for the publication of his book ‘Faviken’. The charming retro cover resembles a children’s story book, cloth-bound stamped with little silhouetted illustrations. I was slightly disappointed that Magnus didn’t stride in, clad in bearskin, armed with a large knife, as befits his Iron John in the woods image. I asked him if his restaurant could feed me, a pescatarian, and he said no problem. “You are not vegan are you?” he asked “because I advise vegans to come in December”
It was a sparkling gathering, the only downside being the lack of and minute size of, the canapés. It verges on cruelty to invite foodies and not feed them. People were getting bad tempered through hunger. Ravenous, I tried to go to nearby MEATliquor afterwards but the queues were ridiculous, even at 9pm on a mid week night. My friend and I ended up at Macdonalds where at least we had a hot meal and a seat within five minutes of arrival. 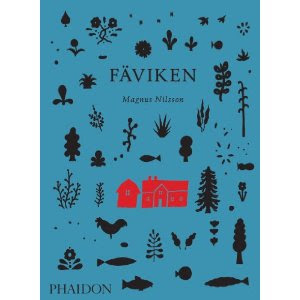 Faviken the book is a good read for someone such as myself. It’s quite a wordy cookbook as Magnus chats through his history, his approach to food, his training, meeting his wife, starting at Faviken and working out how to run a restaurant. His writing style is descriptive and detailed as if he was talking to a fellow chef. I love this. I’m not sure if everyone would. There are no strict recipes, quantities and temperatures are not specified always. He talks to the reader as an equal as if they are as interested in the problems of becoming a chef as he is. This is not a book for amateur cooks unless they just want to get a feel for the direction that Magnus is heading towards.
I love the photographs, the style of the book. My only question mark is the food. It looks spare and raw, reminding me of one of the most disgusting meals I have ever had in my life at The Loft. We were served a grey prawn beached limply on a plate, as if it were a great treat. This soft slimy uncooked meat slithered down my throat. It was all I could do not to gag.
Too many young chefs are trying to do minimalist abstract plating: half a potato, a scattering of something that looks inedible but turns out to be ‘interesting’, a couple of petals and a droplet of a ‘fermented’ sauce. It’s all a bit too clever, too intellectual. Good food is not intellectual, it’s about the gut instinct. The appetite wants umami flavours, fat for mouthfeel, carbs for seratonin uplift and comfort. Listen to your gut.

On Thursday I visited Frieze the annual art fair in Regents Park invited by the Marine Stewardship Council who are working with MoshiMoshi sushi (who had a pop up there) to make sure that their fish is sustainable and their sourcing always identifiable. A valuable aim I agree, however the vegetarian sushi that I asked for was frozen in the middle. Caroline Bennett who started Moshi Moshi, the first conveyor belt sushi, in the UK, way before we’d even heard of Yo sushi, explained that this was because sushi restaurants are obliged to keep all their sushi refrigerated, even though sushi is always served at room temperature in Japan. You know those horrible little boxes of sushi you buy in supermarkets? How the rice is always hard and flavourless, due to being kept in the chiller? It’s not how it’s supposed to be, refrigeration is death to sushi flavour.
Caroline agreed with me that the future is vegetarian but, she said, chefs were resistant to making vegetarian sushi. “It’s hard to get all the flavour into the small sushi, so much easier with fish and meat”.
You have to up the umami with vegetarian food, over-season rather than under, go for big flavours. I’d like to experiment with fusion sushi, introducing intense Mexican ingredients such as huitlacoche and rajas into nori nori.
I wandered around Frieze and saw that many exhibits were inspired by food and kitchen equipment. If food is a cutting edge, avant garde and zietgeisty subject right now, clearly artists will be exploring it. Which is no doubt why Guardian writer Steven Poole has just published a book ‘You aren’t what you eat (fed up with gastroculture)’ criticising the trendiness of food. Unfortunately he is not knowledgeable enough to authoritatively critique the food world. For instance, his first chapter starts with a visit to my Underground Farmers Market although he doesn’t have the grace to credit me or even talk/interview  me at my home-grown event in my house. He derides the customers who attend. According to Steven, we are all pretentious twats. He doesn’t recognise or appreciate the sheer good will, community feeling, trust and genuine curiosity about food that takes place at my Underground Farmers Market. No, he conflates the hard work and enthusiasm of DIY foodies and hands-on food geeks with the snobbery of those who only go to Michelin starred restaurants or the fakery of TV celebrity chefs. There is a book to be written about this but Steven Poole hasn’t written it.
The chef Simon Rogan of L’enclume in the Lake District, hosted a pop up restaurant at Frieze, overlooked by a wooden viewing platform: the restaurant as spectacle. This series of cheffy installations was at the behest of the Lake District organisation, the Grizedale Arts Project ‘Colosseum of the Consumed’. Simon’s performance was a quiet affair, more ingredients than glitz. I’d love to do some performance art, cook for the crowds, an iphone in one hand, a ladle in the other, spooning up my own show, a gourmet gladiator of gluttony! 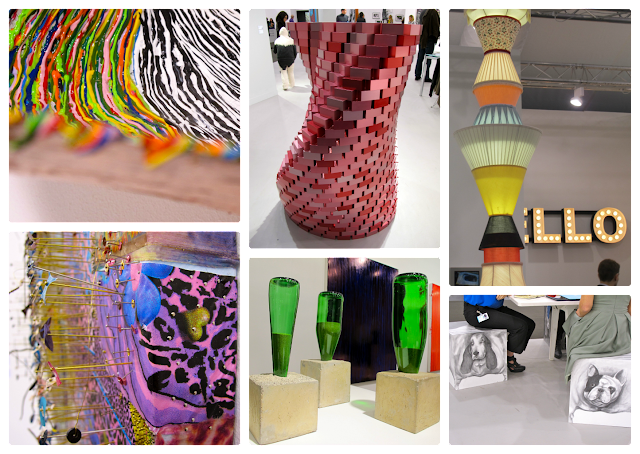