This is my by no means all-encompassing best of 2012 cookbooks list. It’s just the books that I happen to have come across and bought or have been lucky enough to have been sent by publishers. Some are well known, others less so, all merit purchase. But one caveat: I cannot be certain that the named authors actually wrote them. I have been dismayed this year by the discovery of how many cookbooks are ghost-written, partly because I got to meet some of the members of the Guild of Food Writers. It became clear from talking to them (‘hi, I’m actually Gordon Ramsay’ said a polite non-sweary middle-aged woman who lives in the country, ‘Oh nice to meet you’ twinkled another lady who lives in the city ‘I’m basically Hugh Fearnley Whittingstall‘) that virtually no TV chefs write their own books, their own columns, their own recipes. Even if they can write (I’m sure Hugh can for instance), they don’t, because they are now a ‘brand’ and fronting a small multi-national industry of money-making offshoots.  Mostly cookbook authors have been signed up by publishers because of their brand, their ubiquity on TV, their fame, not because of their writing skill.
Therefore the kind of people who employ ghost writers are:

But, it seems to me that there is no shame in not being able to write, merely that, in the age of internet transparency, it would be good if there was more honesty about this. There’s been some interesting talk about this in the United States. Gwyneth Paltrow claims she wrote her book, but people in the know beg to differ. But, in part due to the skill of the ghost writer, the sleb writer believes they aren’t lying because they really are convinced that they wrote their book. The good ghost writer inhabits the skin of the celebrity, takes notes, edits and sorts out their thoughts, they write what they think the celebrity would have written. I’m not sure that worshipping famous people is healthy for society either: while gazing at their heavily air-brushed photos, we are led to believe that celebrities are brilliant at everything. I’m sure this makes people depressed and inadequate. But hey, that’s capitalism innit? Making people unhappy so that they spend more.
Sometimes these ghosted books even win awards while genuine cookbook writers do not. So why not bring this out into the open and have a best ghost-written book award! I heard that Heston Blumenthal insisted that his ghost writer also got an award when he won a prize at the Guild of Food Writers for his book. Now that’s fair play.

Jerusalem The Israeli Yotam Ottolenghi and his Palestinian partner Sami Tamimi has done more to change the middle class dinner party than any other chefs over the last five years. Suddenly we are all using pomegranate syrup, za’atar and sumac, throwing together roast butternut squash, cracked wheat, charred aubergine, burrata and lentils. To say to your guests ‘I’ve cooked something from Ottolenghi’ marks you out as a chic but casual cook. Their work has had an effect also on how we perceive vegetarian food: thanks to them it’s now colourful, vibrant, tasty, modern, international. It’s no longer brown squat slop.
I went to Jerusalem earlier this year, only for half a day, but I’d love to return. It’s an old soul of a city with many food tales sheltering in the shadows of its alleyways. I slung thin dough over a steel counter in the cave-like tenebre of Zalatimo, where you drink Turkish coffee, mint tea and eat mutabbaq, a thin pastry with sweet cheese, pistachios and sugar syrup. It was hard to make, you need years of practise but an easy recipe with ready-made filo is provided here.
This book talks about the hummus wars, for while some complain that the Israelis have appropriated this Middle Eastern dish, it’s also a symbol of peace, breaking pitta bread together…and dipping it.
The book also contains recipes sourced from the Jewish and Arab diaspora who populate Jerusalem; for instance, unusual Georgian recipes such as Khachapuri which I mean to try. The book also contains lovely travel photography by Adam Hinton and food photography by Jonathan Lovekin. 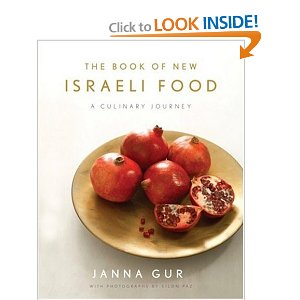 For similar also see The New book of Israeli food by Janna Gur, one of Israels foremost cookery writers.
Confessions of a Kitchen Rebbetzin, which doesn’t seem to be available in the UK, a humorous and entertaining kosher cook book was sent to me after my trip to Israel. A ‘rebbetzin’ is an orthodox Jewish woman who covers her hair. The author is Gil Hovav who I’ve since found out is the Israeli Jamie Oliver, a TV chef. I must admit, I was under the impression that the book was written by a woman! Can you imagine Jamie Oliver pretending to write ‘in drag’ effectively and take on the character of a devout housewife? 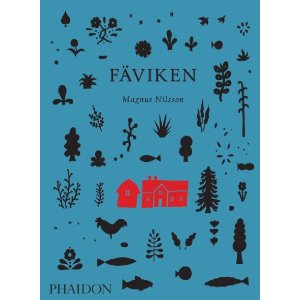 Faviken by Magnus Nillsen.  This book is a good read for chefs and restaurateurs, but it’s not a book to cook from. It’s more of an idea, to get a feel for the direction of modern Scandinavian food. Pretty children’s story book cloth cover and good photographs.

I recommend reputed food writer Catherine Phipps’ Pressure Cooker Cookbook I do like specialist books, focusing on one ingredient or one technique. Catherine’s quietly competent book has tons of inviting and most importantly, thoroughly tested recipes, but has only one drawback, you need to possess a pressure cooker. I hope to rectify my lack of one soon. Having a pressure cooker makes financial and environmental sense when energy is so expensive.

Polpo I love the design of this book, the deconstructed build of it, the nude spine visible, enabling it to be laid flat. Russell Norman, the restaurateur/ author is the guy that made the Venetian word ‘cichetti’ almost as widely known as ‘tapas’. It’s all the same thing really, small sharing plates. The recipes are simple, in fact there are quite a few pages on different types of bruschetta which, lets face it, is basically things on toast, but you are likely to cook from it.

The art of pasta by Lucio Galleto and David Dale. This beautiful produced book by two Australian chefs surprised me because at first glance, who needs another book on pasta? Everybody knows how to cook pasta don’t they? (Actually my daughter has just started university and she’s been shocked to see how her flatmates cook. One girl put uncooked pasta, a jar of ready made sauce and some hot water from a kettle in a baking tray and shoved it in the oven. ‘How was it?’ I asked. ‘Not bad actually’ said the teen.) This book taught me new pasta recipes and inspired me to lust after a pasta stamp to make ‘corzetti’. It also contains fantastic watercolour drawings by Luke Sciberras, so nice to see some art as well as photography in a cookbook.

Veggie burgers every which way by Lukas Volger. Again this is a single subject cookbook by an American cook and writer. There are pages of variations on the veggie burger and some good sides such as quick pink pickled onion slices. It’s rare I look at every page of a cookbook and want to cook from it. This is one.

Prashad cookbook by Kaushy Patel. The Patel family own one of the best Indian restaurants in Bradford, curry capital of the UK (must visit). Kaushy is the mum.  Prashad restaurant was also featured on Gordon Ramsay’s show the F word or one of those shows can’t remember which. Love this book, it’s the kind of approachable Indian vegetarian home cooking I like.

Here I am recommending a couple of gardening books too as presents for Christmas: The Urban Kitchen Gardener by Tom Moggach, lots of useful tips for city gardeners. Some new ideas: growing fresh coriander seeds (The Secret Garden Club is having a ‘Grow your own curry’ session on the 25th of November) and stuff I’ve never even heard of like ‘mouse melons’. 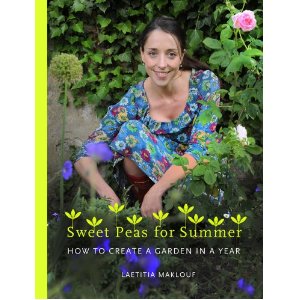 Sweet peas for Summer by Laetitia Maklouf. This beautiful lady has written a follow up to The Virgin Gardener, her break out successful book. She’s got style and artistry and there are wonderful little workshop suggestions. This is probably one for the girl gardener in your life as the book is so pretty.

I’ve also received some fiction books around the subject of food. They’ve all been awful, which is a shame as my favourite all time cookery plus fiction book is Heartburn by Nora Ephron who sadly died this year after a long illness. If I could write one book, this is the one I personally would like to have written. It’s caustic, light, frothy, bloody funny and sad. The recipes work too.