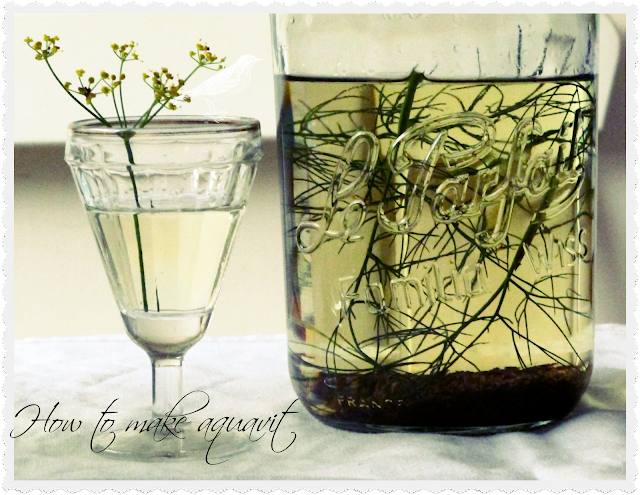 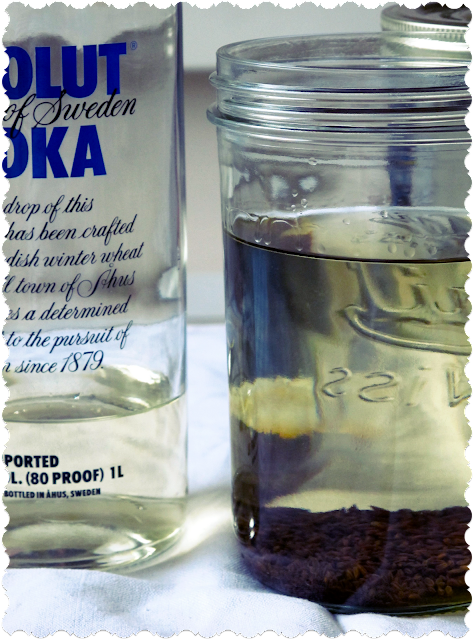 I’m creating a meal to show off Ocado’s new Scandinavian range of foods. I’m going to have such fun using all the products, many of which can’t even be found at IKEA. I also want to serve Aquavit, a typical Swedish ‘eau de vie’ (the linguistic equivalent of Aquavit, water of life) which is drunk in shot glasses as a chaser after beer. (Not the other way round, that’s with tequila). Aquavit is rather hard to obtain in the UK but luckily it’s very easy to make your own.  This is a strong alcoholic spirit that aids the digestion of food, a bit like a ‘trou normande’ and, of course, gets you drunk. It matches well with fish such as pickled herring.
I used Absolut vodka, which is a good quality Swedish vodka.
Add 3 tablespoons of caraway seeds to a bottle. Within two days, incredibly quickly, the vodka takes on the distinctive caraway flavour of Aquavit.
Then strain out the seeds and drink in a chilled shot glass after a Scandinavian beer.
I also tried soaking fennel sprigs and slices of lemon in the vodka. I’ll leave it a few more days.
Another option, if you are a fan of salty liquorice, is to make a liquorice vodka ‘schnaps’ by adding salt liquorice sweets or even nicer, Turkish Peber sweets, which, like salty liquorice, contains ammonium chloride to give the distinctive ‘salty’ flavour.
I’ve been a fan of salty liquorice for two decades and plead with any Scandinavian visitors to bring me some so it’s good news that we can now buy it from Ocado. Some people say it’s bad for you and can make men impotent. I don’t care, I love it. 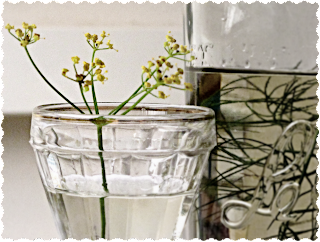