No I’m not talking about finger food. This is about how we cook nowadays. I loved having a cookbook come out last year. I love books, I have stacks of cookbooks. I flick through them on the loo, in bed, while eating, while not eating, while thinking about what I’m going to eat next. I don’t, however, travel with them, or read them on the bus or the tube like I do other books. Cookbooks are too big and cumbersome for that.
Another confession: once I’ve greedily devoured every page of the cookbook I put it away and pretty much never cook from it or even look at it again. If I want to know how to cook something, I’ll google it. I’ll work out how to cook it from the tried and trusted food sites such as the BBC, Jamie, Delia or I’ll go to one of my favourite bloggers.
There is a real problem with cookbooks: it’s almost impossible to remember which recipe is in which book. Granted, if I’m cooking a specific cuisine, say, middle eastern I’ll reacquaint myself with Sally Butcher’s work or Claudia Roden. But if I say, want to cook a middle eastern style recipe but the ingredients I have in the fridge are one pomegranate, some filo pastry, a bag of raisins and some oranges, I’ll probably look it up on the internet.
The reason people are still writing cookbooks is for prestige. God knows, it’s not for the money. Only Jamie, Nigella, Gordon and Delia make any proper money from cookbooks. It’s like a giant glossy ‘blad’ (which is like a promo brochure for your book) for your internet presence. 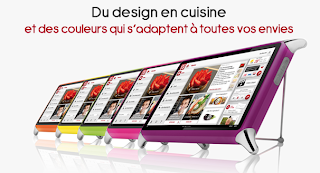 And so to Paris last weekend for the launch of QOOQ, a French product, a sturdy ‘tablet’ with recipes, videos and instructions. Unlike the iPad, which  is a sensitive unstable little bugger in comparison, you can throw ingredients onto it, it can withstand heat, it has toughened glass. QOOQ produced their tablet in France, in 2009, the iPad launched in 2010. 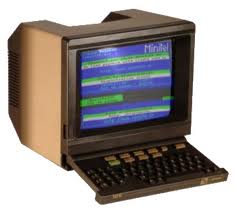 France has form when it comes to being ahead of the game in terms of technology.*
When I moved to Paris back in 1989, one of the things that most excited me was the minitel. This was a small computer style box, rented by France Telecom for a tiny monthly fee, and you could look up phone numbers and addresses, you could book your train tickets, theatre tickets and you could access rather pixelly porn via the infamous 3615 numbers. The screen wasn’t fancy, the user interface was more amstrad than apple mac. It, like teletext, was sometimes rather slow and frustrating. But this was the future.
Apart from looking up recipes on sites and blogs, I’ll look at YouTube videos. This too is not ideal. Sometimes you miss a bit of the instructions and it’s difficult to stop on the exact bit. The best way to follow a recipe is to have a series of still photos as steps which you can control. This can be swiped with your finger, but cooks often have messy hands, so some enterprising apps allow you to make a sound, shout ‘next’ or clap for the next step.
I’d like to make more instructional/funny/food videos but as I live alone, it’s not easy to film yourself. Editing video is a bit of a pfaff too as I’ve only got the shitty iMovie software. I’ve got my own YouTube channel by the way.

Jamie Oliver is obviously thinking along the same lines with his latest project: foodtube. He’s running a Jamie Oliver YouTube dedicated to food. Great idea. The impression I get is he’s going to have new talent presenting food and recipes on it. It’s interactive too.


QOOQ has the right idea but is sort of going the wrong way about it. It’s rather too expensive at around £300. People will prefer to spend their dosh on an iPad for that kind of money. The design is allright although the wire stand at the back is a bit amateurish. The advantage of it, the fact that it’s sturdy enough for the kitchen, is also why no one will carry it around, it’s too heavy. Nor is it cheap enough for people to buy an iPad and a QOOQ.
The content (recipes, graphics, photographs) at present is visually poor, especially compared to some of the sumptuous photography one finds on blogs and apps, and rather old fashioned. The translations we looked at were clearly not written by a native Anglophone speaker. (At the moment it’s translated into American, with cup measurements, they plan to translate it into UK English too). There are many mistakes with ingredients. With a catalogue of 4000 recipes, that’s a lot of editing, checking and translating. Very expensive to pay someone to do that. QOOQ plan to install 1000 recipes on the UK version and you have to pay around £79 per annum to get more recipes. This simply isn’t going to work in my opinion. Why would anyone pay extra for more recipes when you can get them for free on the internet?
At the moment they are using French chefs, most of whom are men except for the odd implausibly skinny mediatique chefette.
I got the impression that QOOQ plan to hire famous UK chefs to promote it. I think that would be a mistake. They’d do better to get food bloggers on board, maybe paying them a percentage per view. As in Paris, they could build a demo kitchen, complete with lights and a place to put the camera. Anyone could be filmed in there, demonstrating their recipe with a pro film crew who would then edit and upload it. Many food bloggers are competent and original cooks, whose work may not be seen on YouTube so why not use that pool of talent?
I feel sorry for  QOOQ as they are a small family firm rather than a massive global corporation like Apple (who I think have gone right downhill. I’ve always used Apple macs, since 1992 when I got my first laptop. But they’ve become greedy and corporate). There is something in what QOOQ are doing, but it’s not quite right for the UK.

* (They are also pretty much the only country that refuses to use the word ‘computer’ or a variation upon that word. No they’ve decided it’s called an ‘ordinateur’. And they had to had a different TV signal system from everybody else too: SECAM rather than PAL or NTSC. Only ex-French colonies and Russia joined in with theirs.)

What do you think? Do you still cook from books or do you trust the internet? Are books just glossy aspirational pretty things to have around? Is it wrong to read cookbooks on the loo? (Just askin’). Do you risk following cooking videos on your precious ipad when you are in the kitchen or would you invest in the more robust QOOQ?