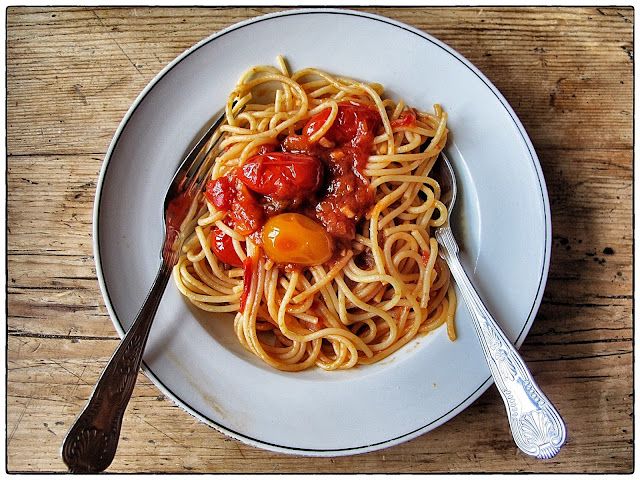 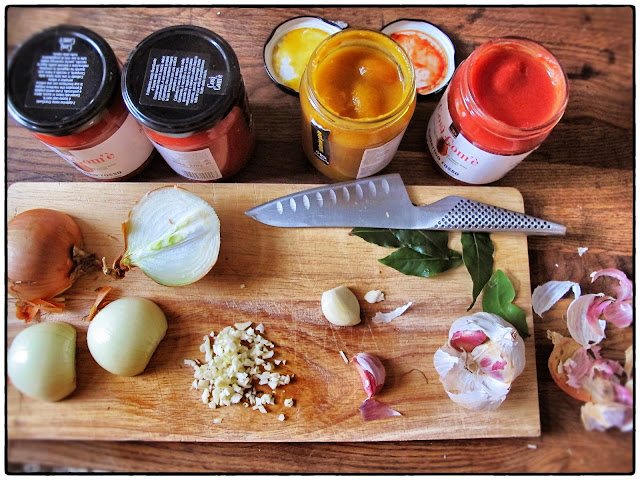 Spaghetti Napoli or Napolitana or, sometimes mistakenly called in the United States, Marinara sauce (wtf, there is no seafood) or more simply spaghetti with tomato sauce is simple and beautiful, a mainstay of my family life.
Does it come from Naples? Yeah, probs. Southern Italy was, is, poorer and hotter than the North and so, not only were they growing ace tomatoes but they could also not afford to add meat to their pasta sauce. Who cares? Who needs meat when great tomatoes provide all the umami oomph you could possibly want? So salsa Bolognese from Bologna, the north of Italy, that is, the classic mincemeat and tomato spaghetti sauce became salsa Napolitana, from the south, an infinitely chicer dish.
Another reason for the popularity of the meat-less sauce is that tomatoes were more acidic before it was bred out of them, and a Napoli sauce was something you could preserve, could conveniently bottle for long journeys, for the winter, for sea voyages.
It’s strange to think about the process of ‘nation branding’ and how misleading it can be. I recently attended a talk where it was explained that the great English breakfast was only about 150 years old, invented, like so much else including Christmas, in the Victorian times. When we think about Italy, it’s ‘USP’, we visualise the colours of their flag: red, white and green. The red is the tomato, the white is the pasta and the green is the basil.
But the tomato is fairly new to Italy, arriving after the discovery of America, via Spain in the 16th century. Furthermore pasta was reserved for feast days, only becoming regularly available to the poor when the manufacturing process was mechanised in the late 19th century.
The medieval Italian peasant was more likely to be eating a vegetable stew with brown bread, much like the British peasant. Except with wine rather than beer.

The first recipe I was ever taught was chocolate butterfly cakes, igniting a passion for cooking, the second recipe was for spaghetti Napoli, a family favourite. I’d decided, at a ridiculously early age, to host a dinner party for 15 people, with three courses. The dinner party was a bit of a disaster: starters went out at 11pm, I got far too drunk and my best friend got off with the boy that this whole shenanigans was constructed for. And she was then invited back to a big swimming pool party at his parents place the next weekend, apparently I was considered “too common”. (His dad was a plastic bag manufacturer living in a big house in the suburbs of North London).
In preparation for this dinner party, my mum taught me how to make the main course. She would put diced carrots and celery in, a kind of sofrito. I don’t do that now. I regard the addition of carrots, celery, mushrooms as an affectation. I don’t even add tomato purée anymore.

This sauce is really simple if you follow my instructions exactly. Do not freestyle it, something I generally give you permission to do in other recipes. No, this is a benign dictatorship when it comes to spaghetti Napoli.
Before we start, a few rules: 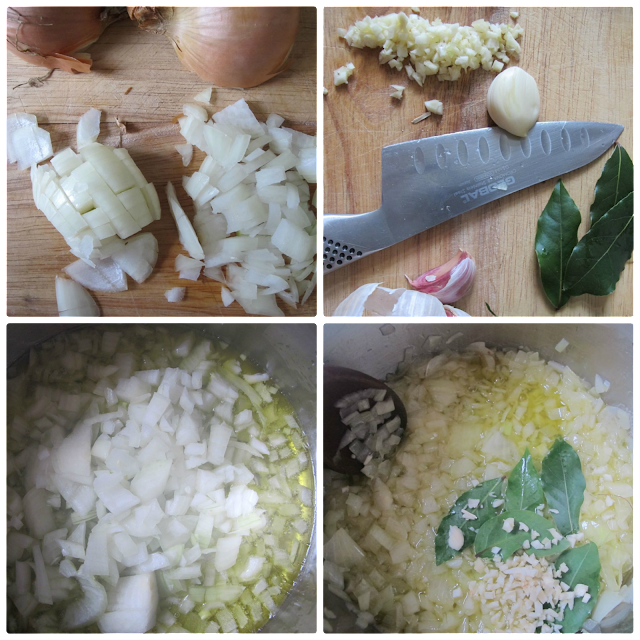 Enough for 6-8 and some leftover

Ingredients:
Olive oil
2 brown onions, diced
4-5 cloves of garlic, finely chopped
5 bay leaves, ideally fresh
3-4 tins or jars of tomatoes or a kilo of fresh tomatoes * (a comment below made me realise I hadn’t specified how to prepare these. I tend to squeeze the tomatoes, tearing them as I go, into the pan. Fresh tomatoes I will chop up. The jarred tomatoes, both yellow and red, in the pictures, I put in whole as they are so soft and sweet and cook quickly)
1 heaped tablespoon of sea salt
Oregano (optional)
700g good quality spaghetti (I generally work on 100g cooked per person for a starter, 150g cooked for a main). But if it’s good, people WILL want seconds.
Handful of sea salt. 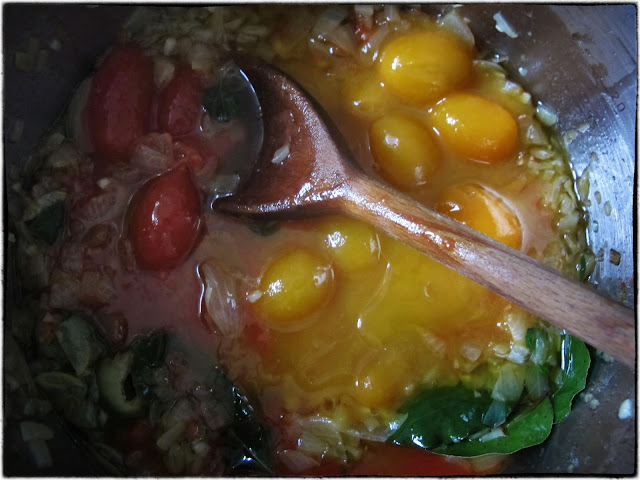 Method:
Heat up your olive oil.
Cook the brown onions until soft.
Add the garlic and the bay leaves. Stir.
Add the tomatoes and the salt.
I had some fresh oregano so I added that. Don’t bother with out-of-date dried oregano. Only use dried herbs that aren’t old.
Simmer for 45 minutes on a low heat if you have time. It’s pretty good after 20 minutes.
If I’m drinking red wine, I might sling in half a glass if the sauce is getting too concentrated.
The pasta bit:
Get a large/tall saucepan. Don’t use a small saucepan. Really. It’s the same as salads. Why do people try to squash a salad into a tiny bowl? You can’t toss the salad in the dressing! Leaves and pasta need room. So if you haven’t got a big pasta saucepan, it’s time you invested in one. This Ikea one is good. C’mon…£35 for something you’ll probably use every day for the next decade.
Get a big load of salty boiling water on the go. Boil 3 or 4 kettles if necessary and fill it up that way.
Throw in a handful of sea salt. Yes. That’s what I said. It’s fine, don’t worry. Feel the fear and do it anyway.
When it’s bubbling, put your spaghetti in, pushing down gradually until it’s all submerged. Stir a couple of times during cooking to keep the strands separate. Cook for a minute less than they say on the packet.
Have your colander ready in the sink.
Strain out the pasta quickly then dump it back into the hot saucepan. Splash a large glug of olive oil over the hot pasta, stirring it, to prevent the pasta sticking together. 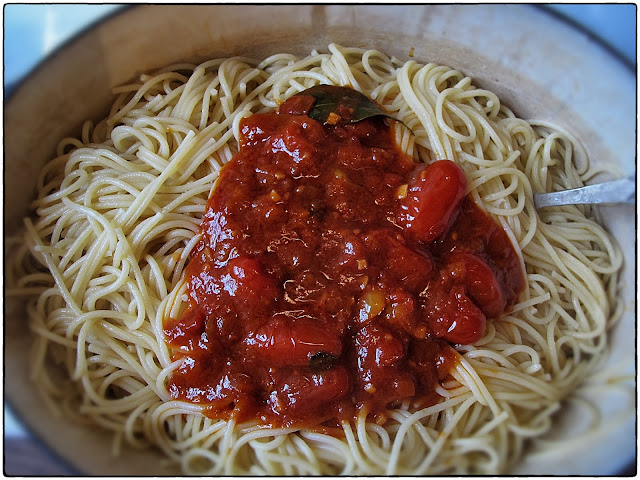 For more information about this entirely tomato based supper club and Secret Garden Club, go to the rest of the post here.