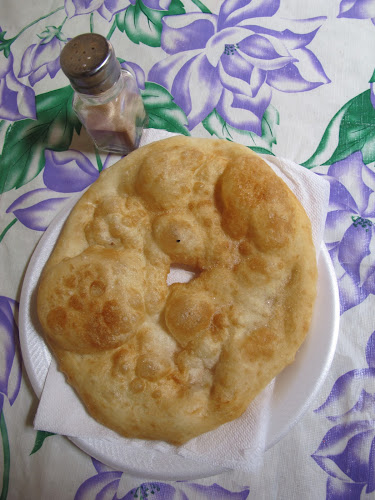 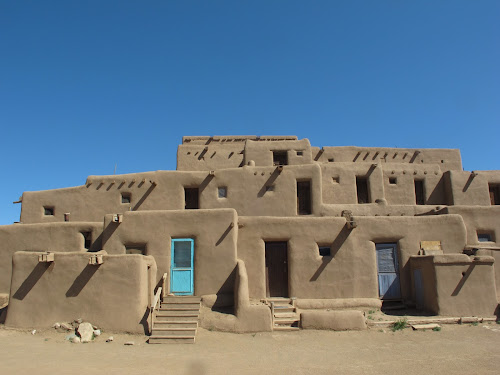 Indians make me nervous. Native American Indians I mean. They don’t like us much and they don’t hide it. They don’t want anything to do with the white man. Half of me can’t blame them, after all the white man did, basically, exterminate them. The other half of me feels uncomfortable around them and irritated with their secrecy and stand-offish attitude. 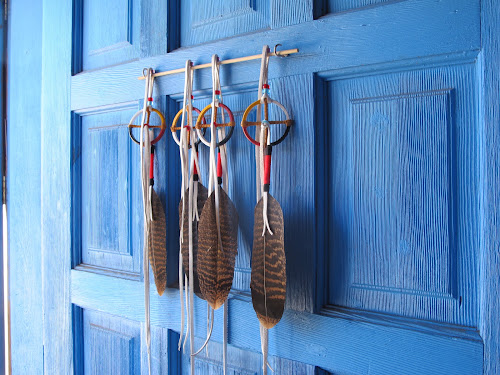 The reservation at Taos is one of the oldest, dating from when William the Conqueror invaded England. The structure, made from adobe, ochre mud and straw, with contrasting turquoise painted doors, is built for defence: you can only access the rooms from the roof, via ladders, which are drawn up in case of attack. There is no electricity or running water other than the bubbling river than runs through it. It’s beautiful: snowy mountains in the background, periwinkle blue skies and terracotta landscapes.
The people that live there are part of the Pueblo Indians who are agrarian rather than the hunter-gatherer type tribes such as the feared Comanches. Pueblo Indians were skilled at growing in the dry arid conditions in the high plains of the United States of America. They developed the permaculture growing technique known as ‘Three sisters’ where corn, beans and squash are grown intertwined.
You pay an entry fee to get into the pueblo, fair enough, and a fee per camera or cell phone, again fair enough, but a wearisome wariness sets in when a native Indian woman asks for two dollars to take a picture of her fire… on top of the camera fee.
Today, however, American native Indians are not being wiped out by Western bound homesteaders (effectively squatters on the move pushing from the crowded East coast, opening up trails across the arid lands) but by their diets: they are more than twice as likely to be diagnosed diabetic as the white man. They are also four times as likely to be alcoholic. 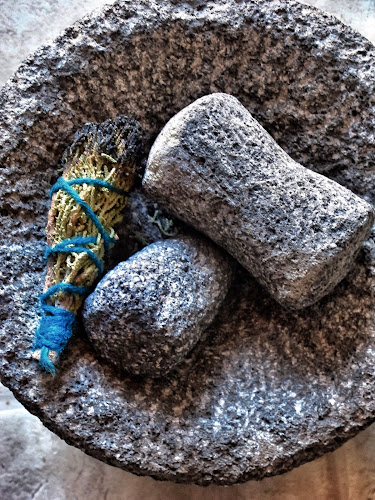 Sage grows everywhere. It is tied together in bundles and used for smudging, which is used in Native American ceremonies to repel evil spirits. 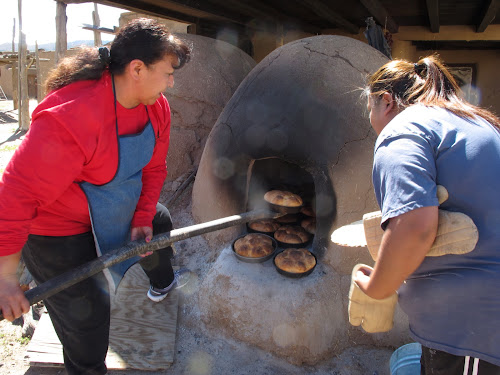 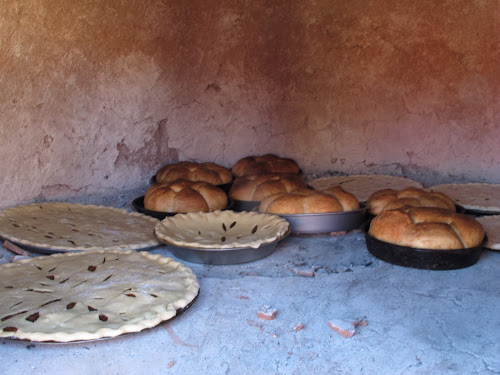 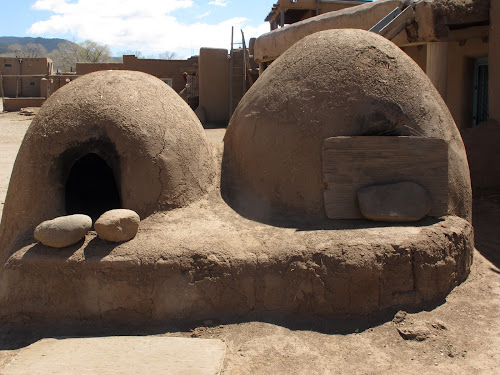 35 bread oven and a 55 bread oven
The day I visited Taos Pueblo they were preparing for a feast. The adobe ovens, some can bake 35 loaves, others as much as 55 loaves in a single bake, were bring fired up. Fragrant spiced cedar wood is used “about an armful” until the temperature reaches 325f explained Rosie, the baker. Once at the correct heat, the loaves, prune and cherry tarts (thinner than a pie but with a pastry top) take only around 15 to 30 minutes to bake. I felt fortunate to visit on this day, to witness this bake off. One of the things that surprised me is that there are no Native American Indian restaurants in New Mexico. 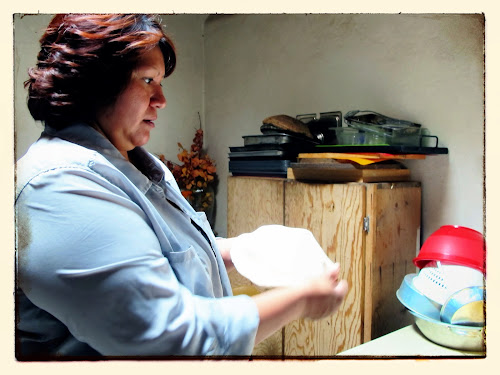 Antoinette in her kitchen. She uses the money earnt to send her daughter to college. 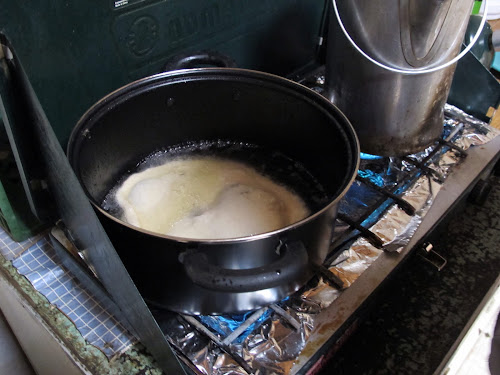 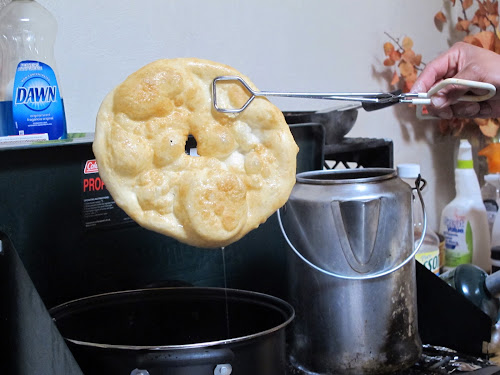 A popular Native American snack is Indian Fry Bread, a kind of flattened crispy doughnut, deep fried and served sprinkled with cinnamon sugar and honey. Delicious, in moderation. Antoinette serves the fry bread and Indian tea (the contents of which she was either ignorant of or refused to divulge, always hard to tell as there are so many secrets within their culture) in her front room, in the corner of which burns a slow, hard wood fire.
Fry Bread
– 450g (3cups) of plain flour, plus extra for dusting
– 1 tablespoon of baking powder
– 1 teaspoon of salt
– 180g (1 1/4 cup) of warm water
– corn or vegetable oil for frying
Combine the flour, baking powder and salt. Make a well in the centre of the flour and pour the warm water into the centre. With your hands, start working the mixture together. Sprinkle flour on a clean work surface and turn the dough out and knead lightly. The dough should be soft and moist but not too sticky. Roll the dough into a log about 3 inches wide. Let the dough rest for 10 minutes.
Cut the rested dough into 8 pieces and roll each into a ball. Using your hands stretch each piece into a thin flat disk. Antoinette made this look very easy but it requires some pizza making skill. Poke a little hole in the middle. Stack your flat dough on top of one another, dusting flour between each piece.
In a saucepan or deep fat fryer, pour in about 10 cms/ 4 inches of frying oil and heat over medium high heat. To test the temperature of the oil, throw in a little piece of dough, it should start to bubble immediately and see if it floats once fried.
Then start to fry your Indian fry breads, making sure you turn them over once one side is lightly golden. Sprinkle with cinnamon sugar and or, if you have a really sweet tooth, some good quality honey.You can also do a savoury version with beans and cheese. 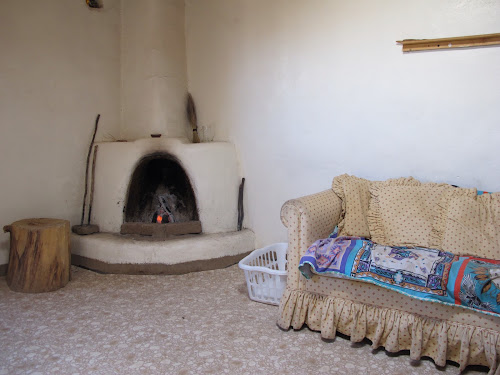 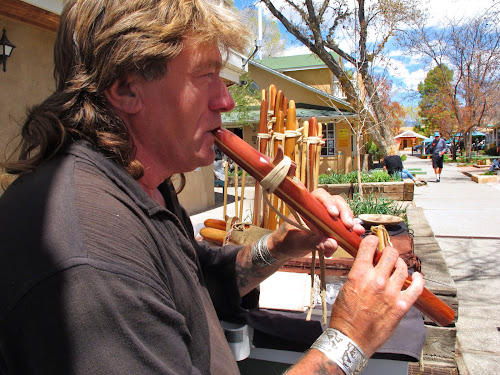 I met Paul Jones, a husky voiced cockney from Islington, imagine Adam Faith incongruously playing the part of an Indian in a Western, selling hand-carved flutes in Taos. This, he was taught, by a Native American Indian man who he met on his travels around the States. Now he is married to a Native American Indian woman and they live on the Picarus reservation nearby “they call it ‘Pick your arse'”. Most couples on the reservation do not marry, relationships are fluid. Paul and his wife have five mixed race kids, none of whom have visited England yet. If Paul’s wife dies or they separate, Paul would be obliged to leave the reservation but his kids can stay. It took him a long time, four years at least, just to be acknowledged by the others on the reservation. “Mind you, they don’t talk much” said Paul “especially when eating. The Indian man doesn’t talk when he eats. Nor do I now”. 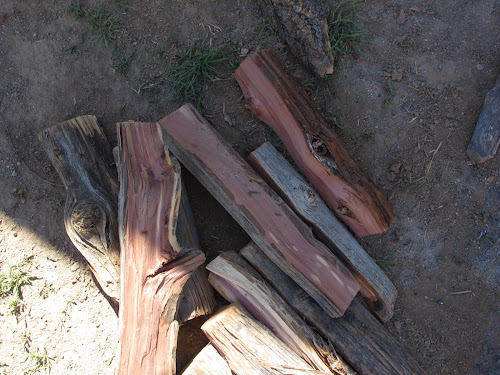 Currently I’m reading ‘Empire of the summer moon: Quanah Parker and the rise and fall of the Comanches, the most powerful Indian tribe in American history’ by S.C. Gwynne. I also recommend the Navajo tribal police books by Tony Hillerman.