Bang in the geographic centre of Denmark, on the Jutland peninsula, lies a city called Aarhus. It’s the smallest place that can still be called a city. Shortly after Denmark won a historic victory at the Eurovision song contest earlier this year, I went there to visit dairies and to find out more about Danish cheese, particularly Danish blue, the Castello range of soft blue and white cheeses, and the Castello range of decorated cream cheeses. I was impressed by the dedication of the guys that ran the dairies. They are ruthless about quality; every day each batch of cheese is tasted and if it isn’t up to scratch, it’s binned. Good cheese is expensive to make: in general it takes around six to ten litres of milk to make one kilo of cheese. For Danish blue it takes 515 litres of milk to make 66 kilos of cheese.


It’s basically preserved milk; the only way of keeping milk for travelling purposes. Michael Pollan in ‘Cooked’ says: “…like many other fermentations, cheese was from the beginning, a boon to mankind: a perishable foodstuff that has been processed in such a way as to render it more digestible, more nutritious, more durable and more flavorful, than the original.”

A brief history of Castello cheeses:


In the blue cheese family tree, Danish blue or Danablu as it’s known in Denmark, is one of the more recent members of the blue veined dynasty. The earliest is probably Roquefort, of which there are references in literature (Pliny) from AD 79. The British Stilton was created much later, in the 18th century. Danish Blue was invented by Marius Boel in the 1920s when he was trying to make a Roquefort cheese, made out of ewe’s milk, but from cows milk. Production started in 1949 and became part of Arla foods in 1986. It’s now one of the best known and most popular blue cheeses in the world.
Castello Creamy Blue, born in 1893, on the other hand, is more the descendant of the softer, creamier Gorgonzola Dolce (800AD). It was developed by the glamorous Tholstrup family (one of the descendents is married to Roger Moore of James Bond fame) from Denmark who were adventurous travellers. Inspired by Italian cheeses, Rasmus Tholstrup returned to Denmark to make Castello blue cheese. 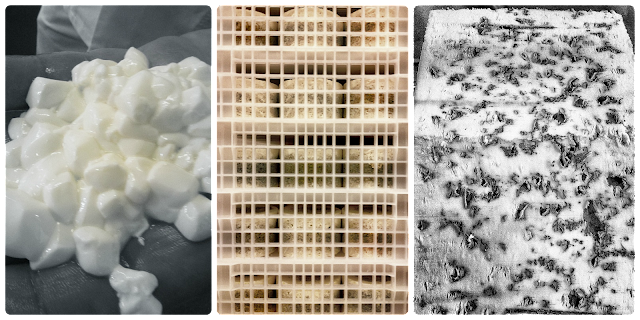 What are the blue veins on blue cheese?


It’s a kind of mould, but a good mould from the blue mould culture. Just a tiny amount is enough to turn  a huge vat of cheese curds into blue cheese after ageing. To aid the process, the cheeses are pierced with stainless steel needles. This ensures a good spread of the blue veins.
You know the white furry ‘skin’ around Brie or Camembert? That’s a kind of mould too.
Mould can be very good for you. It’s the process behind all fermented foods, such as sourdough culture, which is helpful for the flora and fauna of your gut.
Penicillin is a mould and it is said, prior to the discovery of penicillin, that shepherds in the Roquefort area used to pack wounds with blue cheese to deter infection.
Moulds, however, in the production of Blue Castello, need controlling. For that reason there is strict quarantine between sections of the Gjesing dairy. The whole factory is air pressured to prevent outside moulds and workers must change clothes when they go from a blue mould area to a white mould area.

One of the hardest things when making blue cheese, is to ensure that the veining is evenly distributed; it starts from the interior and spreads outwards. People are disappointed if they get a wedge without some blue veins.  Each type of blue cheese has its signature piercing, for instance, Creamy Blue has a star shape piercing.

What kind of milk do they use?

Castello uses cows milk and produces both organic cheeses and non-organic. The milk is homogenised, which is a method of boiling milk. This breaks down the fat globules into smaller more regular cells which improves the texture of cheese. Goats’ and sheeps’ milk naturally have smaller fat globules. Homogenisation also whitens and strengthens the cheese.
Most of the milk is from local dairies in Denmark but the Jersey blue and Jersey white cheeses use the fattier rich milk from Jersey cows.
Some of the ‘Unika’ range of artisan cheeses that Castello make, in collaboration with chefs such as Noma’s René Redzepi, use raw milk. These aren’t yet available in the UK, but I’m hoping!

When should I eat blue cheese?

The Danish, Germans and Norwegians are the only nations that eat blue cheese for breakfast. Hardcore! They love it on crispbread and in open-faced sandwiches. But the biggest blue cheese scoffers are the Finns.

Mostly people eat blue cheese after dinner, although it’s also wonderful as a sauce, a salad dressing or crumbled on salads.
It matches very well with sweet wines, champagne and honey.
It’s served as royal weddings… maybe they will serve it to contestants at the Eurovision song contest next year?
Decorated Cream Cheeses:


The popularity of cream cheese varies geographically: for instance Northern Germans won’t eat it but Southern Germans can’t get enough.  And cottage cheese sales are going up thanks to the Dukan diet.
I’ve always loved cream cheese but I was shocked to find out that there is virtually no dairy and mostly stabilisers in Philadelphia cream cheese. A cheesemaker in London once told me: “It should be sold in a pharmacy not a food shop”.
I tasted several of the decorated cream cheeses made by Arla. I sneered at the Castello Pineapple Halo, dismissing it as ‘seventies’. But, after tasting it, I loved its unusual flavour and so did my family when I served it on a cheese board, for it disappeared within minutes. The chive encrusted and black pepper encrusted cream cheeses were also good and work well with smoked salmon for instance.


There are vast parts of the world that don’t eat cheese at all. China is a huge future market as they start to adopt Western diets in addition to their native diets. Like with the discovery of the New World, cultural assimilation goes both ways. They bring us sushi and dim sum, we give them cheese, bread and wine.
Cheeses from Arla are shipped abroad, as opposed to flown, to America, Mexico and Australia.
You may have seen ‘Puck’ in glass jars in the chilled section of ethnic food stores, which is made by Arla; it sells well in the Middle East as it doesn’t need refrigeration. Puck makes a fantastic dip.
The UK is the biggest market for Danish blue cheese after Scandinavia. We have a sophisticated palette for strong cheese. 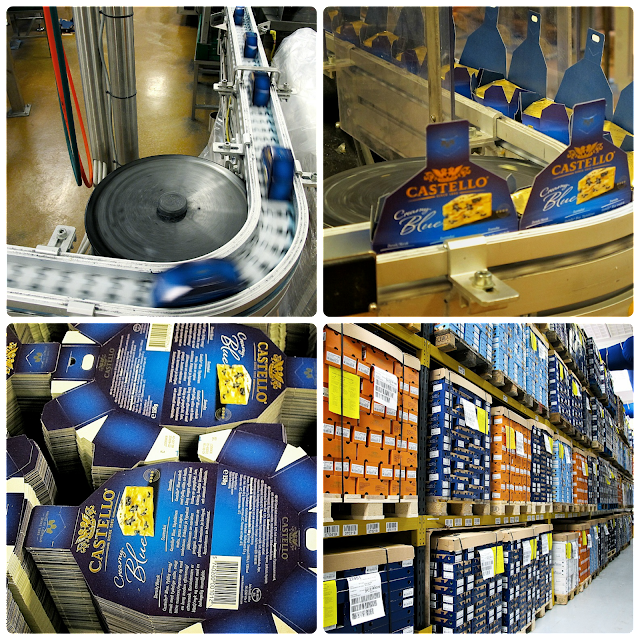 Next post: How to create the perfect cheese board