I never realised what an important magazine The Grocer was until they featured my Underground Farmers’ Market a couple of years ago. The reaction and feedback was far greater than that from more well-known publications. The Grocer is the food industry magazine, the one that supermarkets, suppliers and producers read. They have an annual supplement ‘The Dairymen’ and asked me to cook them a menu inspired by dairy products sent to me.
Every day couriers brought to me large chilled parcels of cheese, butter, cream and yoghurt. I had great fun playing around with the ingredients and tasting new things. Most of the products are British apart from the Swiss cheese. Britain now rivals France for cheeses: while De Gaulle famously complained about the difficulties of controlling a country that boasts 350 cheeses, Britain now has about 1, 200 cheeses. (Maybe that’s why we have a coalition government.)

This is the menu I came up with:

The weather was so humid yesterday and it was certainly a tough day in the kitchen with a cranked-up Aga. I felt that eating cheese fondue indoors on one of the hottest days of the summer would have been a mistake, so we set up a long line of white-clothed tables in my garden. Lanterns flickered in the trees and the outdoor bathtub filled with pink petals and essential oils. The guests were cool and refreshed. Industry chat about dairy matters, laughter and clinking glasses filled the air. Who needs a standard corporate dinner on a night like last night? In the five years I’ve been running my supper club, it’s rare that British weather is stable enough to eat outdoors, so this was a magical experience, especially as I used many of the plants we’ve been growing in the Secret Garden Club.
By this morning the weather had cooled, the sky had thickened to habitual grey, it had rained overnight. Was this the last of the summer nights? Oh but it has been a longed for glorious summer has it not?

Soft pretzels with cheese and sage

Into a bowl, put 100g of flour, the yeast and the water (luke-warm, not hot). Cover with clingfilm and leave in a warm place for 3-5 hours. If you have a sourdough starter, add a cup of that also.

Once your ‘pre-ferment’ is bubbly, add 900g flour, salt, milk, malt extract, melted butter, chopped up sage and grated cheese. Knead the mixture to make a firm but silky dough.
Form the pretzel shapes by rolling the dough into 40cm sausages, make a circle, crossing over the ends and pressing them into the dough.
Leave to rise for 1.5 hours on a baking tray covered with silicone paper or a silicone mat.
Pre-heat your oven to 200c.
Once they are risen, fill a deep baking tray with boiling water on your hob. Add the baking soda. Carefully place the shaped dough into the tray of boiling water for a few seconds until they float. Use a slotted spoon to scoop them out and lay them back on the baking tray. Brush the egg wash over them and sprinkle with sea salt.
Bake the trays of pretzels for around 16 minutes, until a dark golden brown.
Remove from the oven and allow to cool completely on a wire rack.
Serve with beer.
Red Leicester chutney cheese and onion bhajis
4-5 onions, thinly sliced
200g gram flour
1 egg, beaten slightly
2 tblspns of curry powder (I make my own mix, recipe in my book Supper Club)
350g Geetas Red Leicester chutney cheese, grated
1 green chilli, thinly sliced
A large pinch of sea salt
A handful of chopped fresh coriander
Vegetable oil for frying
Fry the onions until soft then put most of them into a bowl, leaving the others to fry until crispy. Add the rest of the ingredients, mix, then add the crispy onions.
Preheat your oven to 180ºc. Prepare your frying pan or deep fat fryer.
Heat up the vegetable oil to 180ºc and use a tablespoon to scoop the mixture into the fryer.  Do a few at a time. When the outside is crispy and golden put them onto a baking tray, covered with a silicon mat or greaseproof paper.
Put the tray filled with bhajis into the oven and bake at 180ºc for 10 minutes.
Last night they were very popular, served with a chutney or mint/coriander/yoghurt sauce. You could use another cheese but this Red Leicester chutney cheese (Geetas) worked very well. 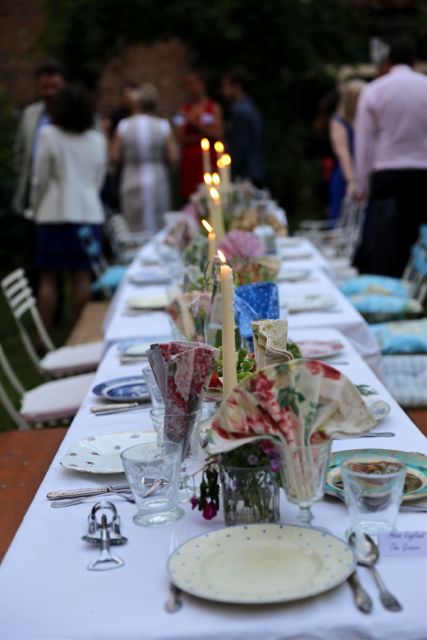