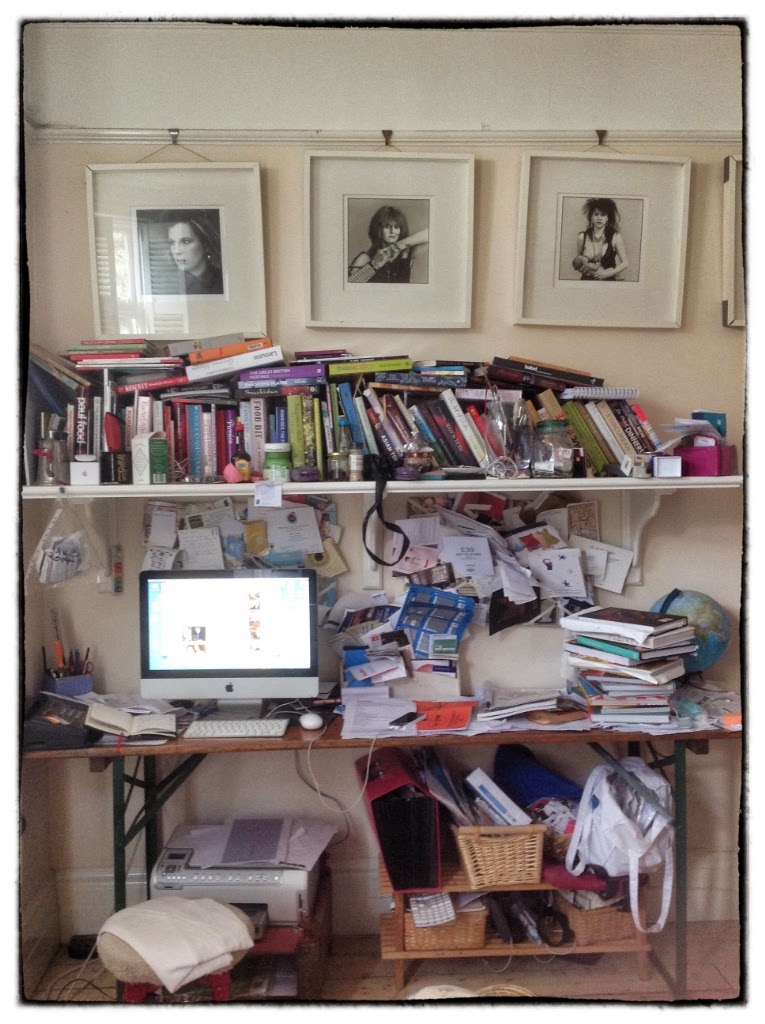 This is where I’ve been spending most of my time the last few months, writing, at this rather messy, book-jumbled desk, in my nightie. Sometimes I attach an apron to my body, over the nightie, and go to the kitchen to test some of my recipes. (My nighties are all stained with food). As a freelancer, I don’t need any proper outdoor clothes, I see-saw from nightwear to apron. But writing several books on the trot since last summer, I’ve practically got night blindness, so seldom do I leave the house. But here is a brief diary of what I’ve been up to in London in February and March, (aside from visiting South Africa and Botswana which was a welcome break).

Breakfast at the Connaught:
I won a night at the Connaught Hotel as a prize at the annual ‘galette des roi’ party hosted by chef Helene Darroze. I thought it was the perfect place to celebrate my daughter’s 20th birthday, The Teen no more. They really pushed the boat out, giving us a suite, champagne, a cake. In the room, there was a mirrored lit cocktail cabinet, a telly in the bathtub, large heavy expensive art and photography books to leaf through, a George Clooney coffee machine with a dish of chocolate covered cocoa beans. Below is our butler. He told us a little about the history of the hotel; it was named after the Duke of Connaught, formerly Saxe-Coburg, a son of Queen Victoria, who changed his name into something less Germanic after the first world War. In fact there is an error in the book ‘Birdsong’ by Sebastian Faulkes, where one of the characters refers to staying at the Connaught, when the name at the time would have been The Saxe-Coburg. On each dark pannelled, gold embossed stairwell, there is a portrait of a dog. The staff wear small pewter badges of a hounds head, to signify fidelity and service. Later we went downstairs to swim and use the steam room. We met two gentlemen in the steam room. I was so curious about the other guests, what did they do? How can they afford this hotel? It’s such a different world for me. I asked these men ‘what is your job?’ and they hesitated a long time before proferring ‘dentistry’. Are dentists that rich?
It was interesting to see London from a visitor’s point of view, albeit a rather well off visitor. The Connaught is a time capsule, a Victorian hotel, in the centre of an area of London the ordinary Londoner never visits, Mayfair. Around the corner was the restaurant Scott’s, the scene of the end of Nigella and Charles Saatchis marriage last summer, and the regular haunt where he is taking his new girlfriend, Trinny Woodall. But blanching slightly at the Mayfair prices of the main courses, we went to the local Spaghetti House, where I had spaghetti vongole which was really pretty good, but, as usual, not enough white wine in the sauce.
The next morning we had breakfast in the crescent shaped sunlit breakfast room at the front of the Connaught Hotel. You could have a Japanese breakfast for £36, a champagne and caviar breakfast for just under £500, and various other options. I chose the healthy ‘well being’ breakfast, very unlike me, but even that was extravagant and luxurious: a tiered stand of home-made yoghurt, home-made granola bars, creamy porridge, exotic fruit salad, and freshly squeezed carrot juice. Behind us a table of businessmen were having a morning meeting. Amazing really that some people are so busy they can only meet for breakfast. I kept trying to eavesdrop to see how it was going. I don’t think the meeting went well, as the person who came to meet them left quite quickly. 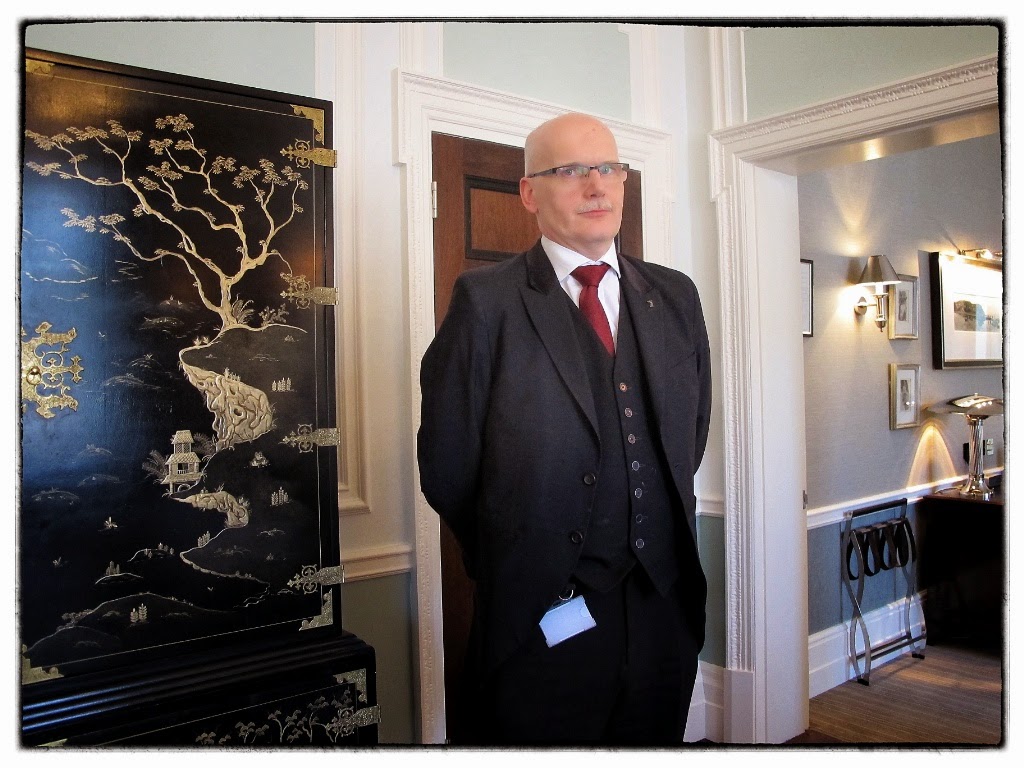 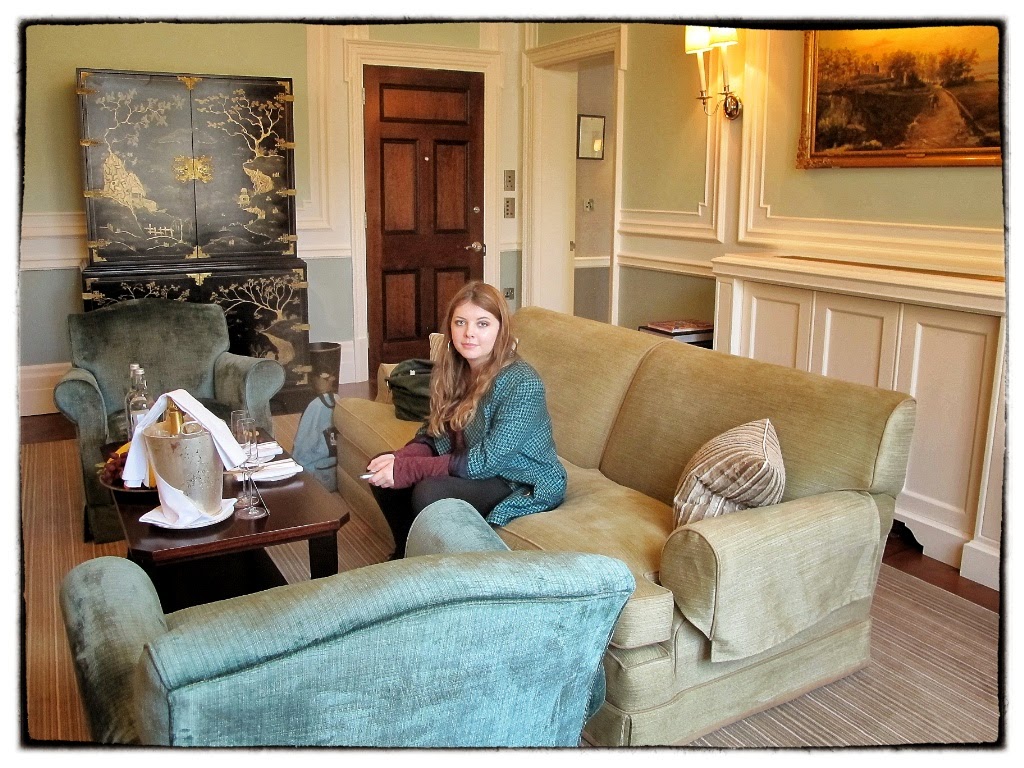 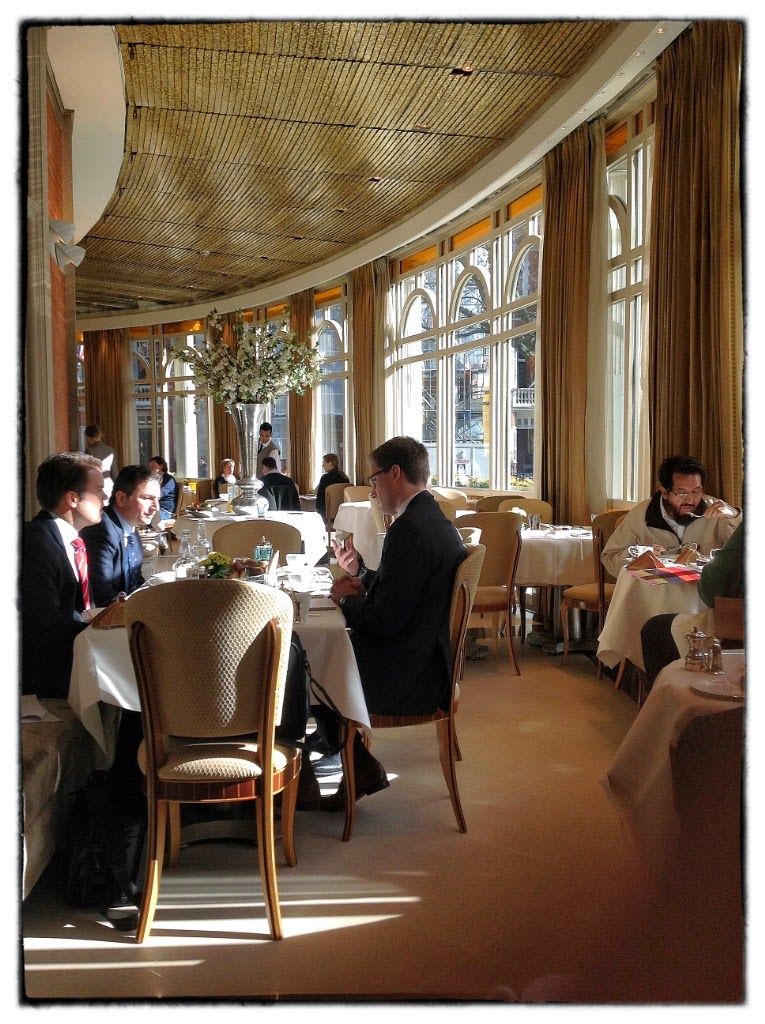 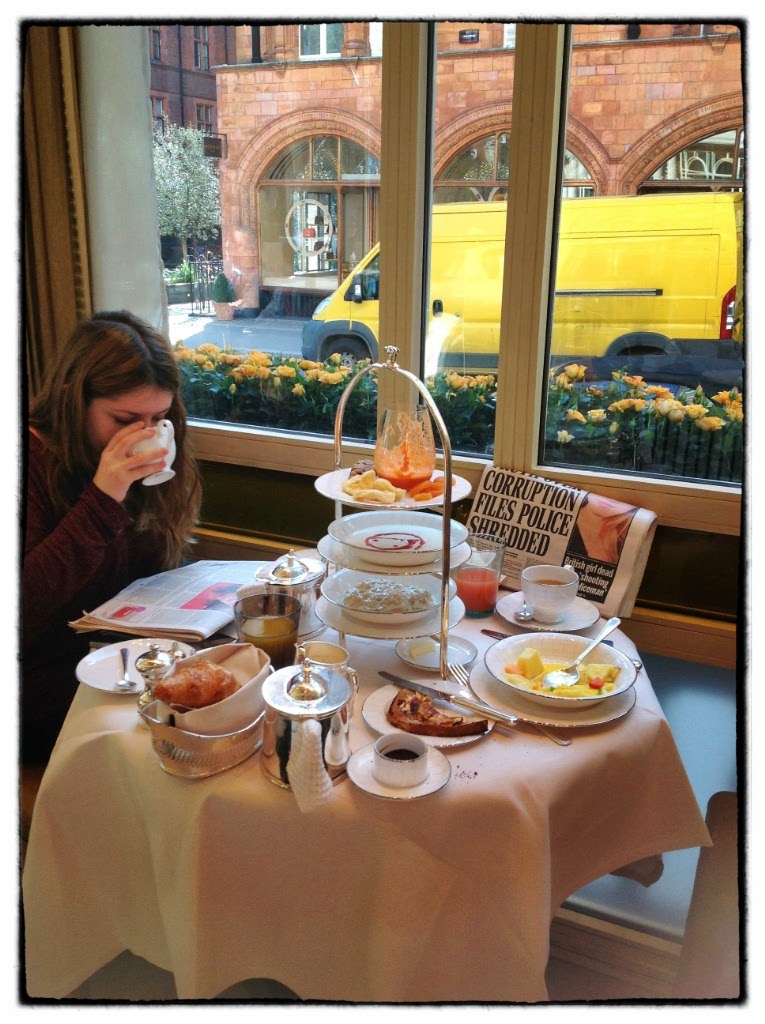 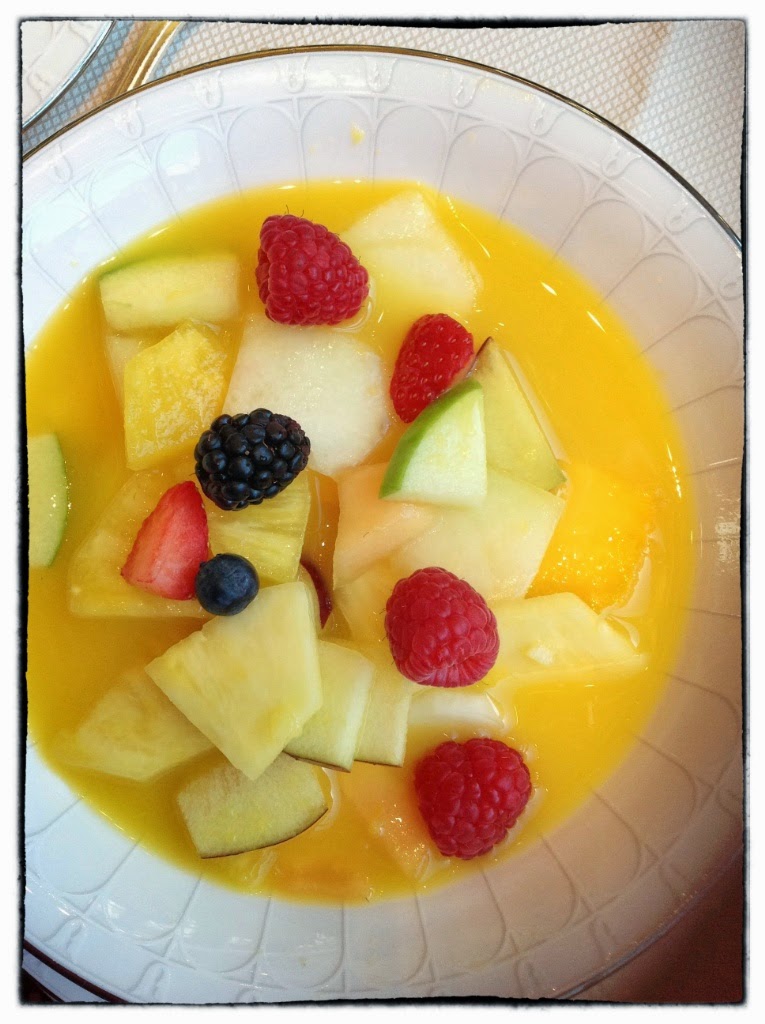 Lunch at Gymkhana:
After the Connaught I walked around the corner to have lunch at Gymkhana, the latest project of chef  Karam Sethi, owner of Trishna, where I had one of the best Indian dishes of my life, a coriander crusted sea bream. This Edwardian style dining room with wooden booths was very elegant, but they did that usual thing of trying to shove us down in the dark basement but I insisted on eating upstairs. I don’t want to eat my food in the dark, nor do I appreciate noisy music. This is a real issue for me in restaurants, if I’m meeting someone, want to talk, I don’t want background music unless it is very low and unobtrusive. I always feel the music is there to entertain and stimulate the staff rather than the guests who end up exhausted after spending a couple of hours bellowing at each other, as in a nightclub. My mother, who is very deaf, chooses restaurants nowadays on the basis of acoustics rather than food. Food may be the new rock n roll but let’s not take it too far. I want an assault on my taste buds not my ear drums. Plus I like to see my food, I want daylight not murky darkness, because I like to photograph my food for this blog. (Any chefs who are arguing with that are moronic. If I instagram my food, I’m publicising your restaurant.)
That said, lunch was incredibly reasonably priced: £20 for two courses, £25 for three for very good quality cooking, including wine although there is also a decent wine list. I ordered the potato chat for starters, a street food, crunchy mouthfuls, into which you pour tamarind coriander water from a jug. I repeated my favourite, the coriander sea bream for mains and had a really good Rose Kulfi with basil seeds for dessert. I loved the chinaware, all pastel willow patterns and antiqued silver. I would like to go back to try the dinner menu. 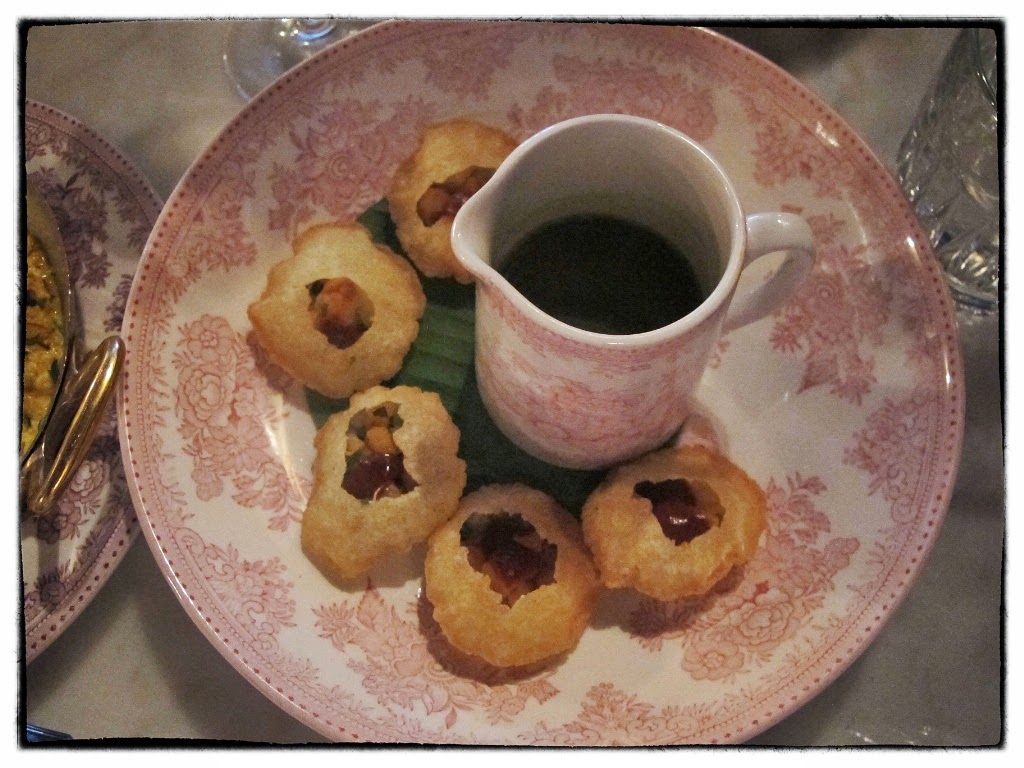 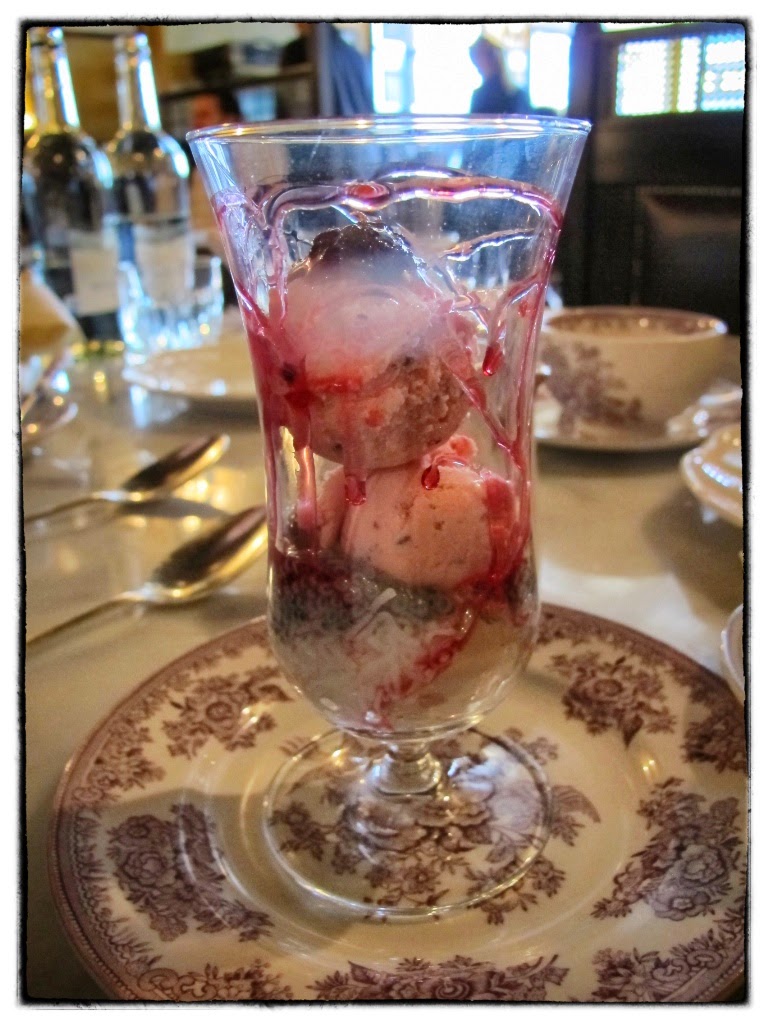 In March, transport union leader Bob Crowe and veteran MP and campaigner Tony Benn died. Felt very sad about both of them, it was like the passing of a certain kind of proper left-winger. You knew what you were getting with both of them, none of that PR/spinning bullshit. Here is a touching tribute I spotted at Green Park station on the way back from Gymkhana. 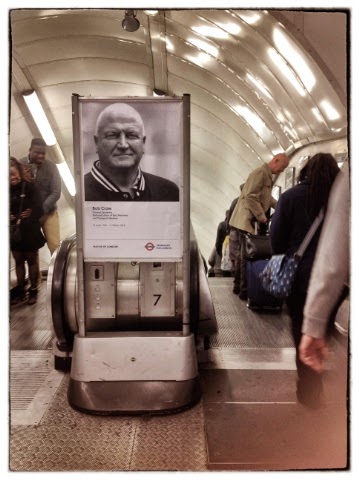 Tea at Browns:
I used to love afternoon tea at Browns because they did hot buttered tea cakes. I believe all teas should have a hot element, and my forthcoming book will certainly be banging the drum in that regard. Browns not only have forgone the tea cakes, but serve rather disappointing Victoria Sponge which was, frankly, stale. Plus the tea pot stand was too far away and I got the feeling one had to wait for the staff to serve. I want regular top-ups of fresh tea, not stewed stuff. I expect to down at least four cups during an afternoon tea party. The rooms are still cosy, with an old school Gentleman’s club vibe, including roaring fires, in contrast to the pastel and gold flecked elegance of the Ritz, but the food was a disappointment, especially at the 40 odd quid you have to spend. The very least you require from an afternoon tea is excellent baking. The scones were ok, small enough to pop in your mouth, but the sandwiches were unimaginative and the petits fours passable. 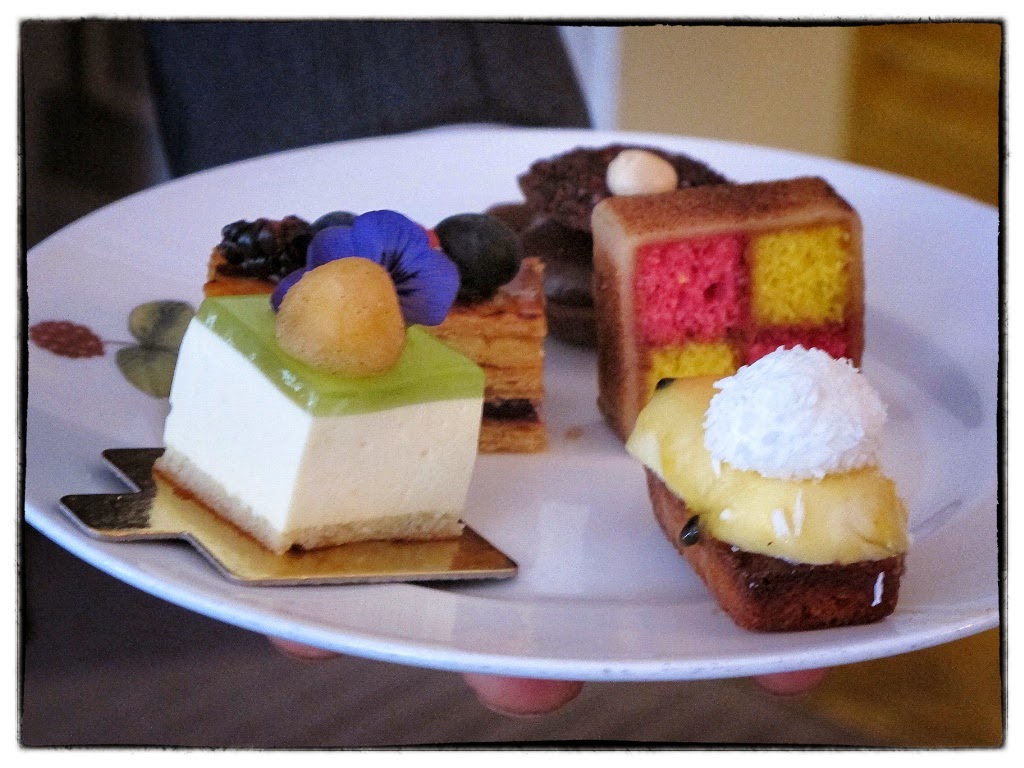 Chocolate with Paul A Young:
From Browns I walked to chocolatier Paul A Young’s Soho premises where he was doing a talk and demonstration of his new chocolate bar. Paul is always fascinating to listen to, passionate and knowledgeable about his subject. He’s been working on forming relationships with growers to produce his own chocolate, roasted and ground on his premises in London, using the whole bean, shell and all. #Bean to Bar. The results are intense: slightly gritty but not unpleasantly so, with a deep fermented flavour and acidity. He gave me some cocoa beans and I immediately set to work on trying to grind them in my Vitamix at home. I’m working on some recipes. 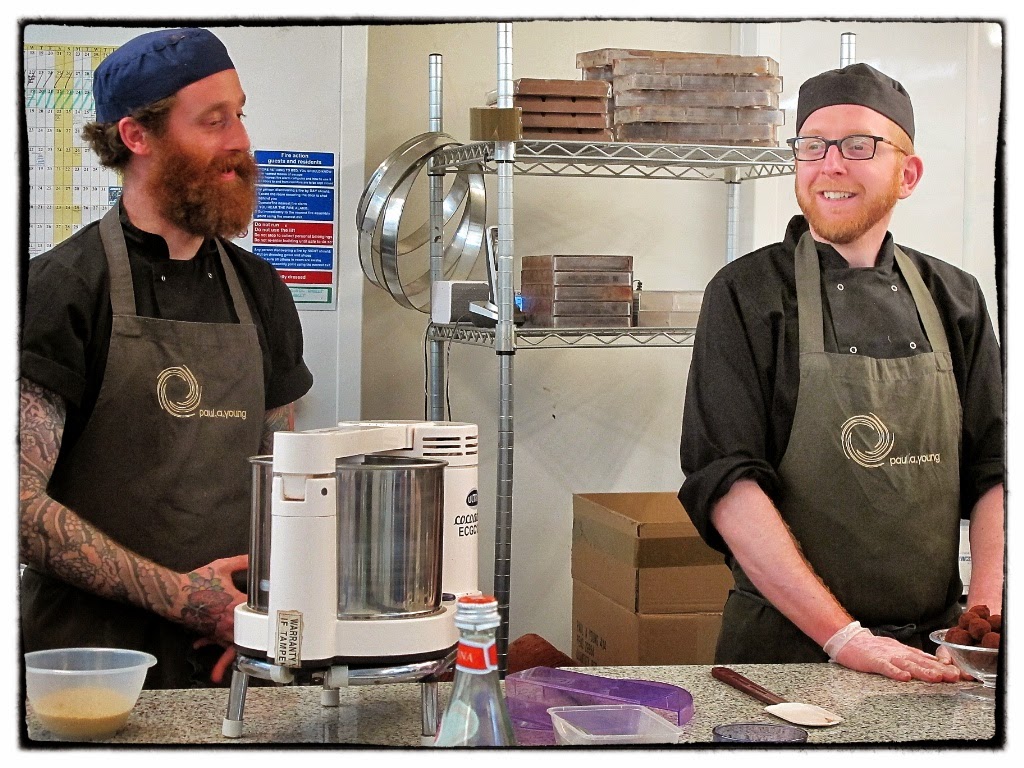 A visit to Hampton Court and the newly discovered chocolate kitchen:
Paul A Young is a modern day chocolatier in a grand tradition. I’m surprised he doesn’t have his own little room in Buckingham Palace where he alone, of all the kitchen staff, is allowed to take up a daily silver handled pot of hot chocolate to the queen. If I were queen, this is definitely a custom I would reinstate. For years at Hampton Court they used these rooms as store rooms, fortunately the shelving and ovens were left in good condition, they have now restored them to their 17th century grandeur.
Also in attendance during the chocolate making demonstration, was author Neil Davey, who has just brought out a book on chocolate, a perfect present for Easter ‘The bluffer’s guide to chocolate’. Here he is below, discussing chocolate techniques. 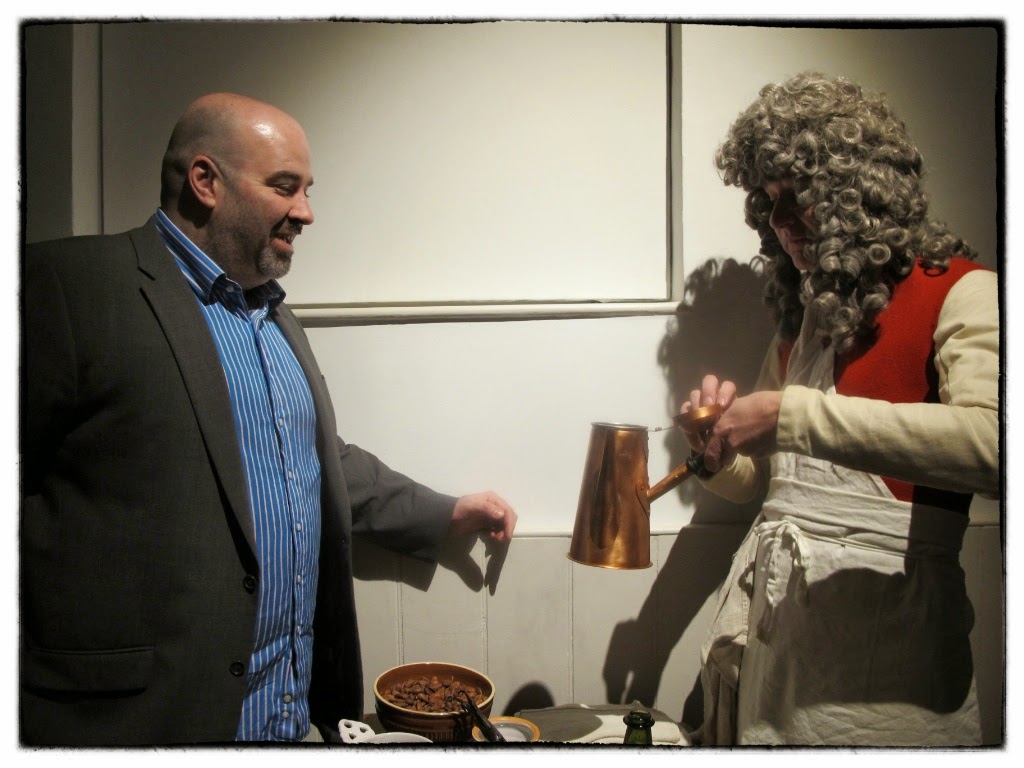 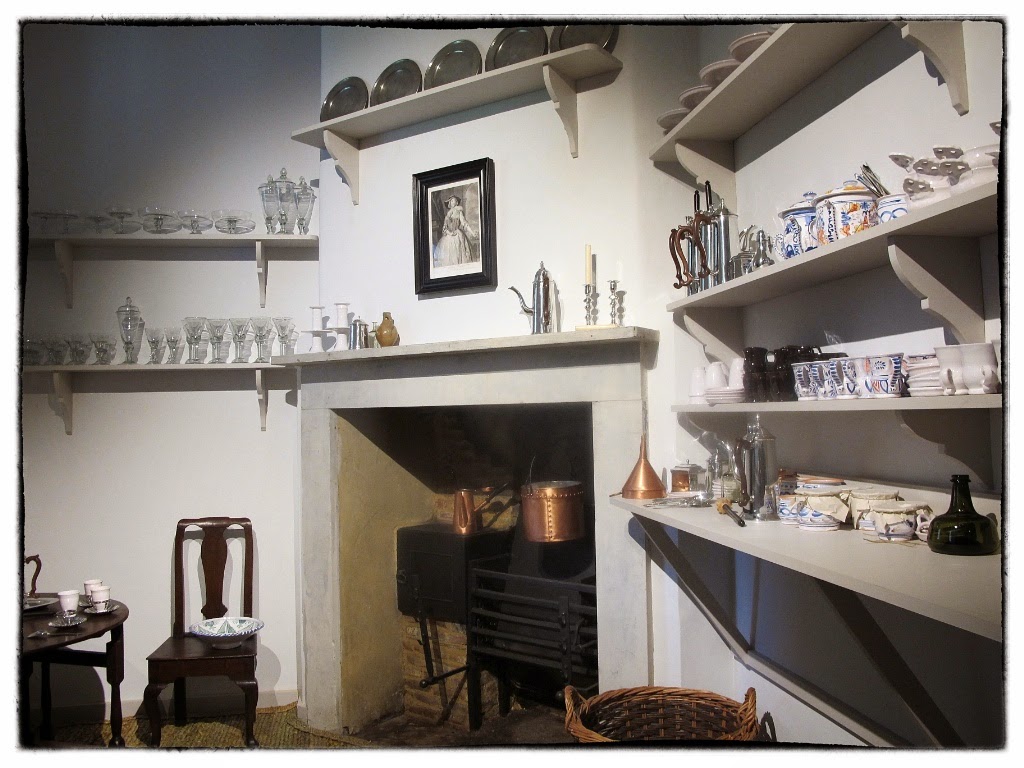 Please Hampton Court, start reproducing some of this stuff as homeware. 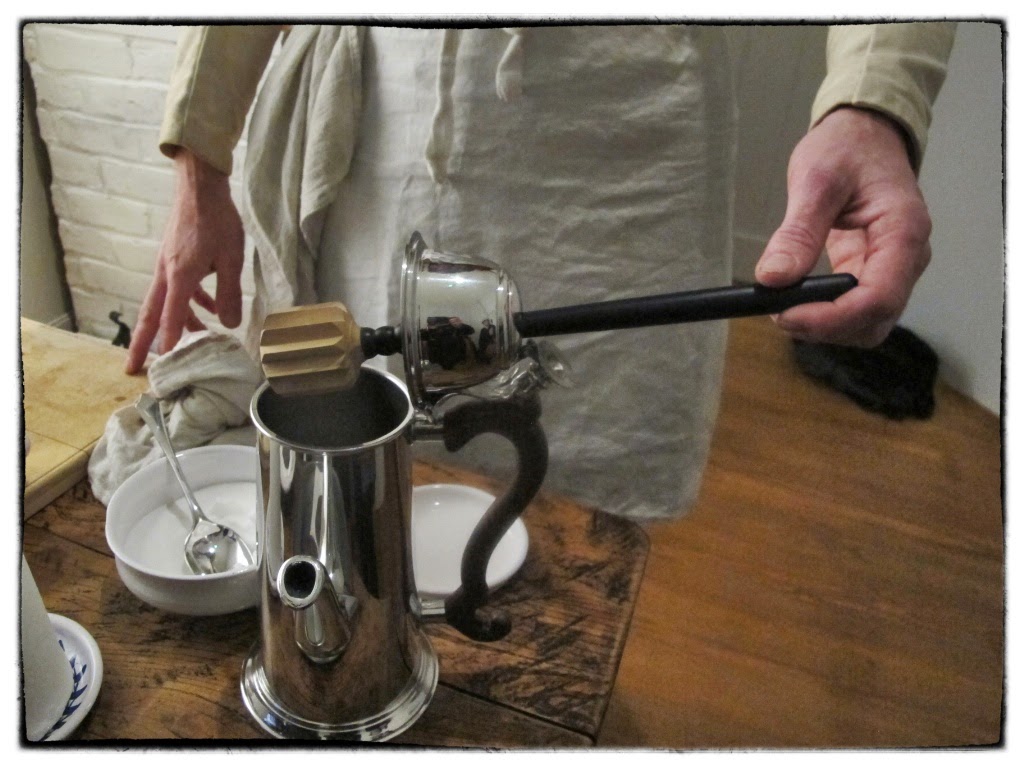 This wooden ‘whisk’ is remarkably similar to the ‘Molinillo’ that they sell in Mexico today for the same purpose. 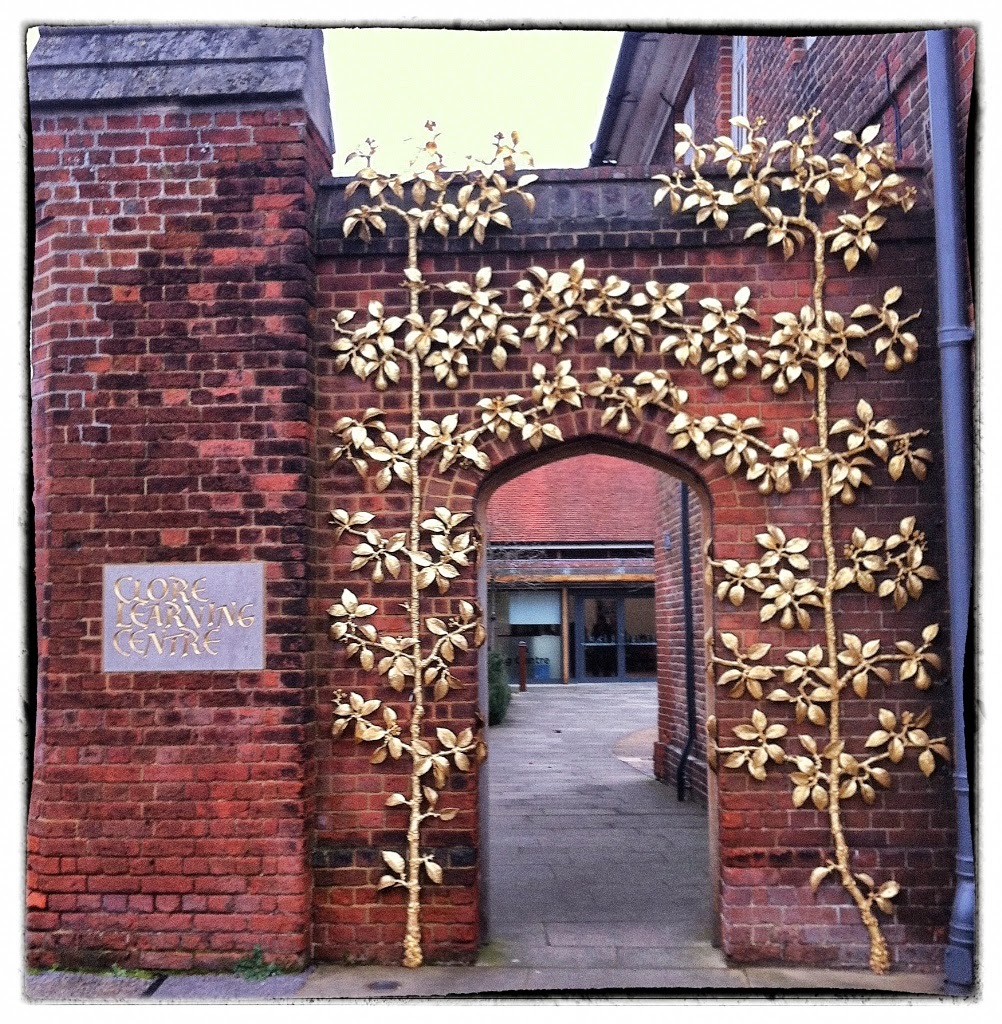 A pretty picture of the Hampton Court entrance. You really must visit, nowadays you can see all the kitchens, and there are mini reenactments of tudor scenes. 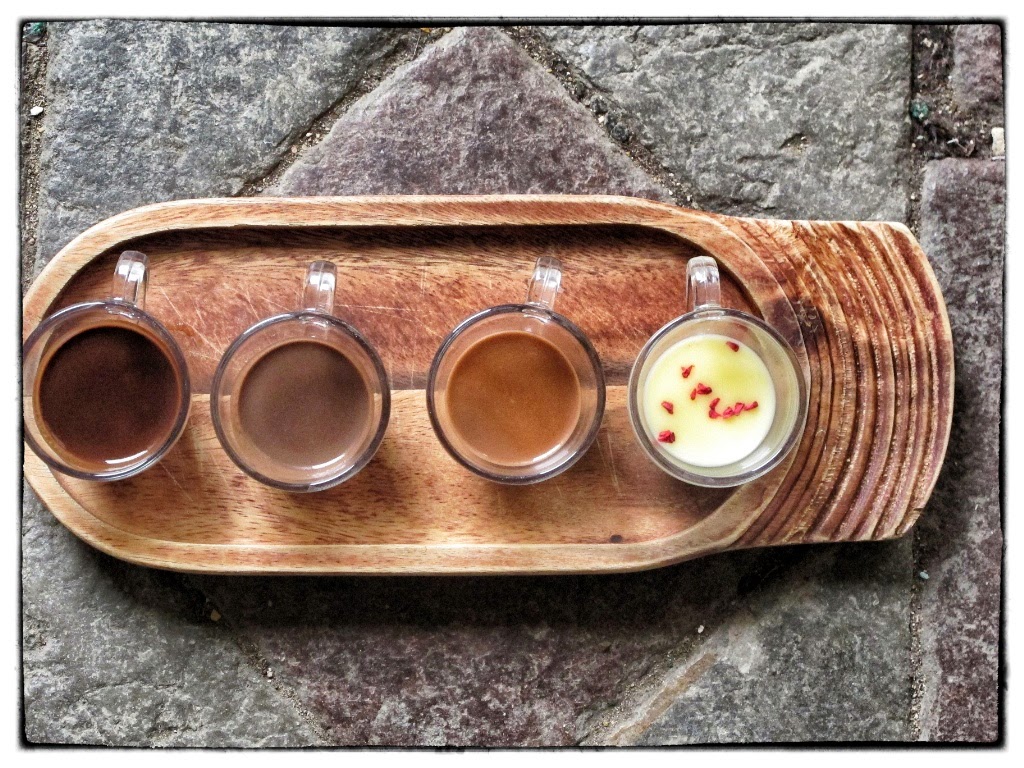 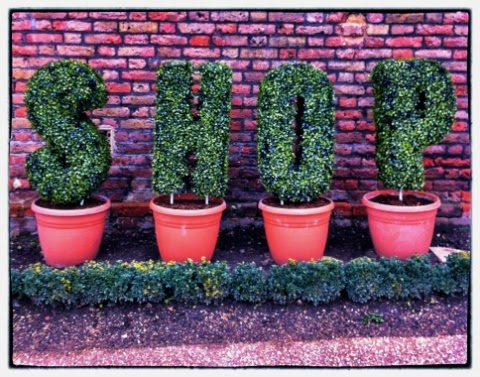 Do love a gift shop.

Supper with Claudia Roden and Tim Anderson:
Square Peg, the publishers of my forthcoming book ‘MsMarmitelover’s Secret Tea Party’ held a supper club at The Ship pub in Wandsworth, the meal cooked by their authors. Myself, Masterchef winner Tim Anderson and the great Claudia Roden made dinner. We all did mini-speeches before serving our course: Claudia talked about how she used to work for Air Italia for £6 a week and a few free flights. This gave her the opportunity to visit Italy often, learn about their food. A new edition of her classic book The Food of Italy has just been published. Claudia made a squid salad and pepperonata as a starter.
Later, when I was prepping my course, I asked the kitchen at The Ship if they knew who she was. They didn’t, so I explained ‘basically you’ve had one of the top food writers, ever, in the world, in your kitchen’. 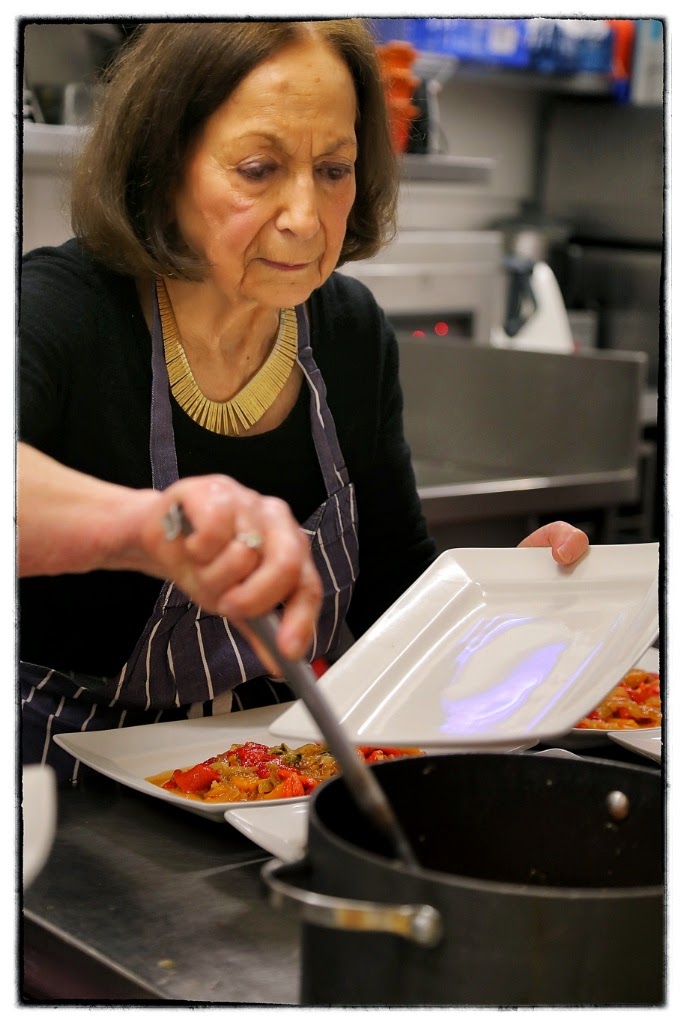 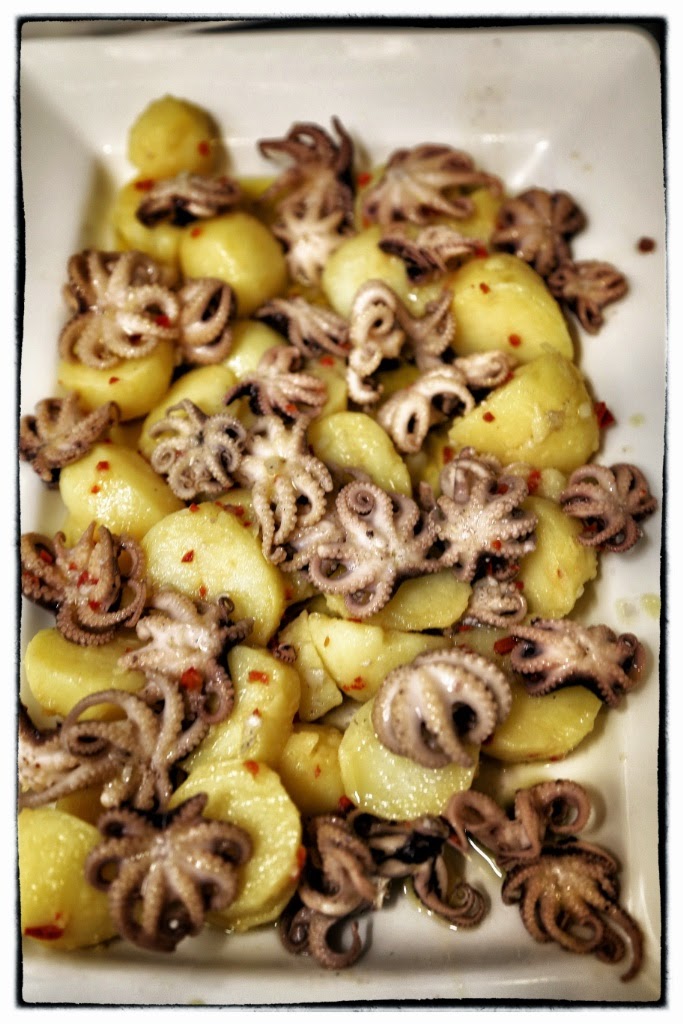 American chef Tim Anderson won Masterchef in 2011. He’s very influenced by Asian, particularly Japanese food but for his first book he will be creating ‘Japanese soul food’, a more country style version of Japanese food, unpretentious, full of flavour, and achievable for the western home cook. For the main course, he made ramen with tea pickled eggs, gorgeous stuff. 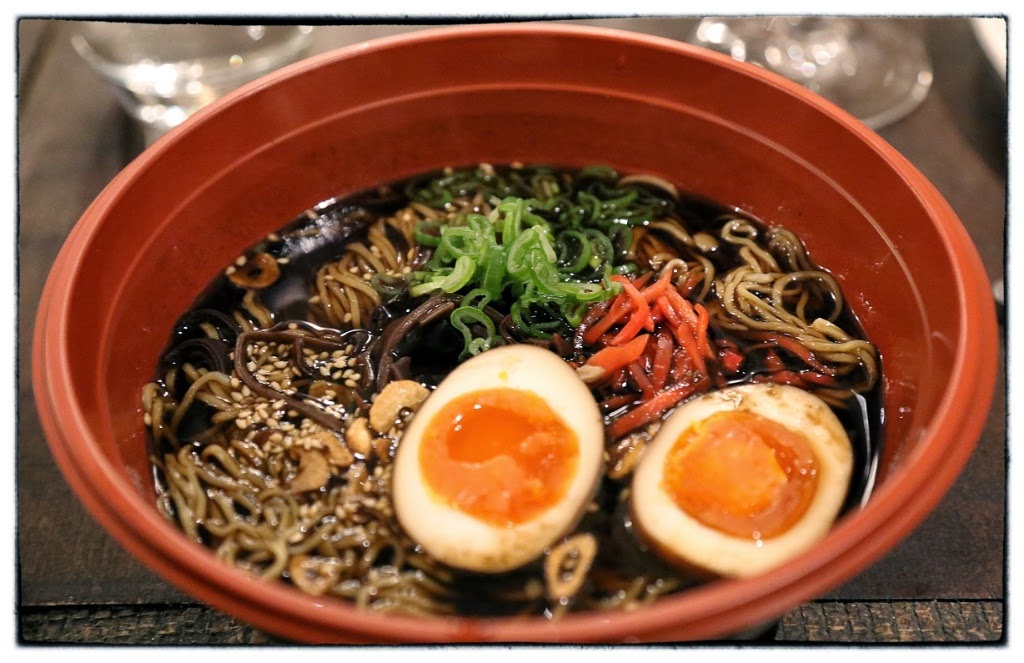 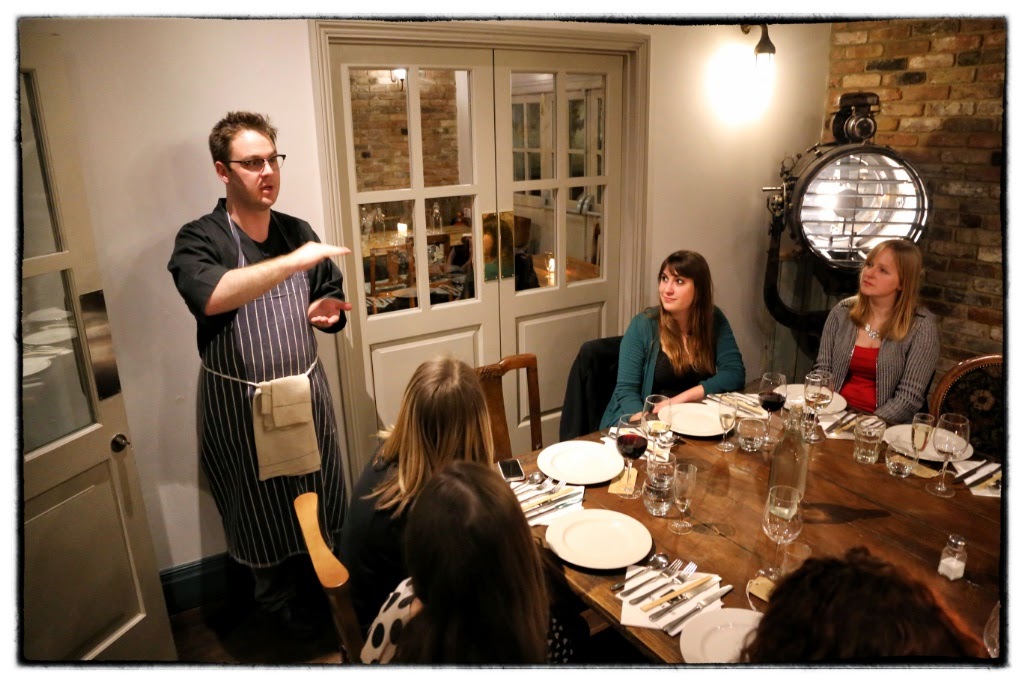 I made dessert, a camp pud, an arctic baked alaskan roll with sour cherry icecream. A high risk dish  which I transported from Kilburn to Wandsworth, an hour away, terrified it would melt. People seemed to enjoy it. The recipe for this will be in the book.

Dinner at Vijay, Willesden Lane:
Kilburn is not great for restaurants. But Vijay is an exception, a southern Indian restaurant at the beginning of Willesden Lane. I went there on a Saturday night with my sister and daughter, it was packed. The food is all freshly made and the sheer vivacity of the flavours bear testament to that. That’s all I ask of a restaurant really, that it be freshly cooked. Try the uthapam, a Southern Indian spicy crumpet thing. My recipe for it is here. 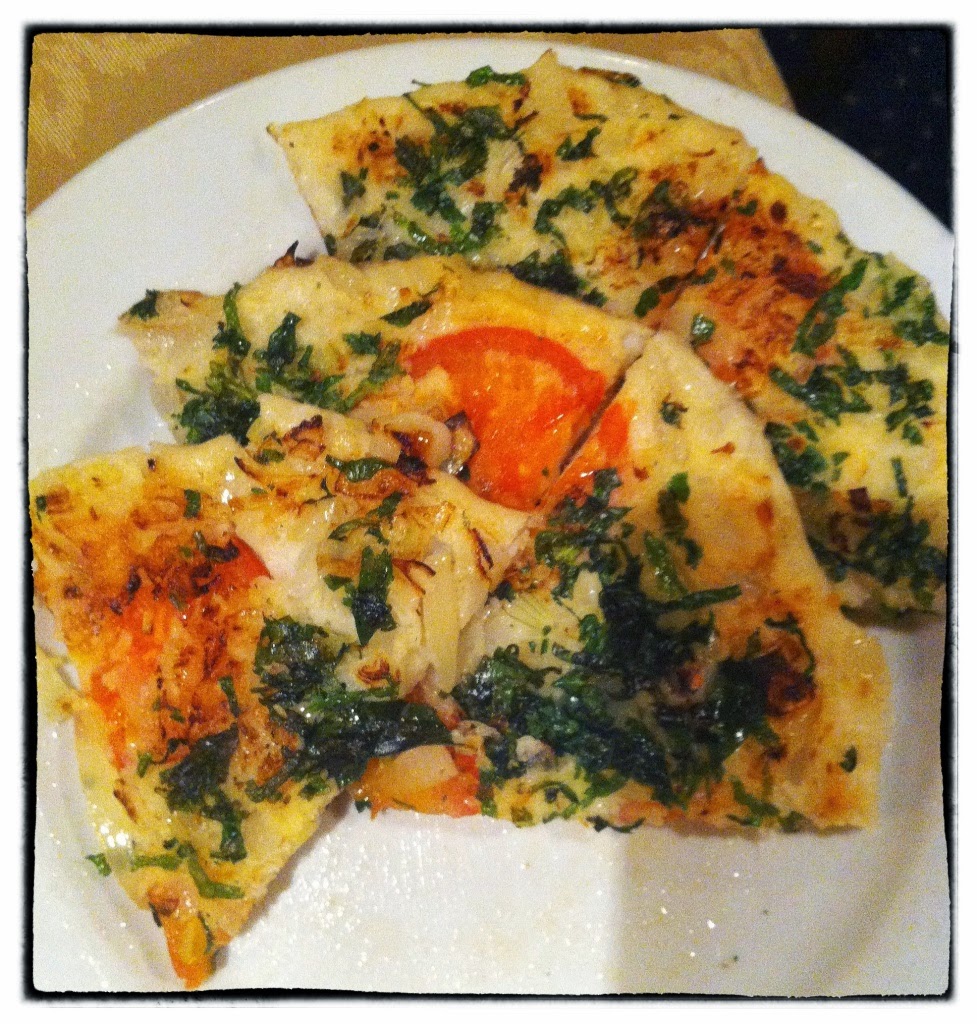