Here is a roundup of what I’ve been doing in April. 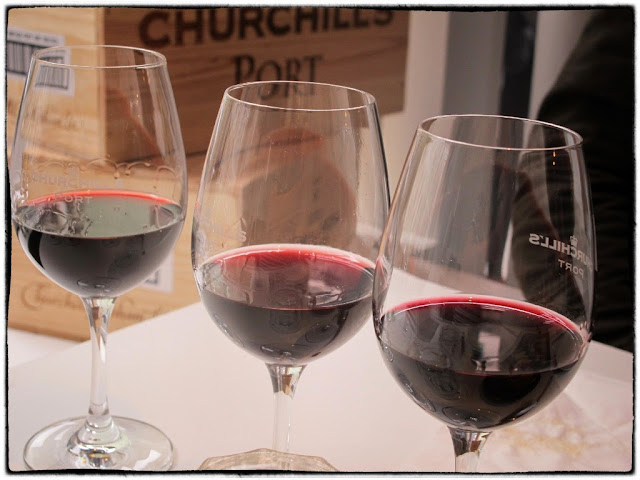 Sherry has now rehabilitated its reputation as a serious drink, not just for grannies. Pop-up restaurant Churchill’s Port house is trying to do the same thing for Port. This is the project of Max Graham, son of John Graham who started Churchill Estates in Portugal in 1981. Max went to school in Portugal and Britain and has linked up with Ricardo from Portugal behind the bar and a Spanish chef, Xavi Meroño.

“We tried to get a Portuguese chef but they weren’t as good” lamented Max.

I was invited as a guest and had a ‘flight’ of ports, ruby and tawny, some of them aged for ten and twenty years. It showed that port does match well with food, and isn’t just for Christmas. There wasn’t much to eat if you were vegetarian/pescetarian but the beetroot gazpacho and rhubarb trifle were particularly good.

My mate Jim the Stoner (with not so much a Camberwell carrot but a Manchester reefer) came with me and loved the meat dishes while I enjoyed the salmon ceviche. Talented though the Spanish chef was, I do think Portuguese food would have completed the experience. There is such good food in Portugal and we don’t see enough of it over here. Come on Nuno Mendes! Stop mucking about with all that modernist bollocks and do some proper Portuguese food!

The Spaghetti Tree and Soho 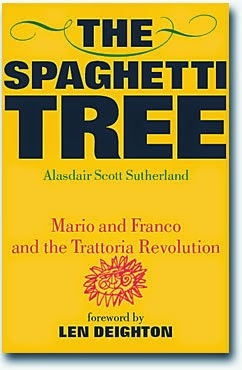 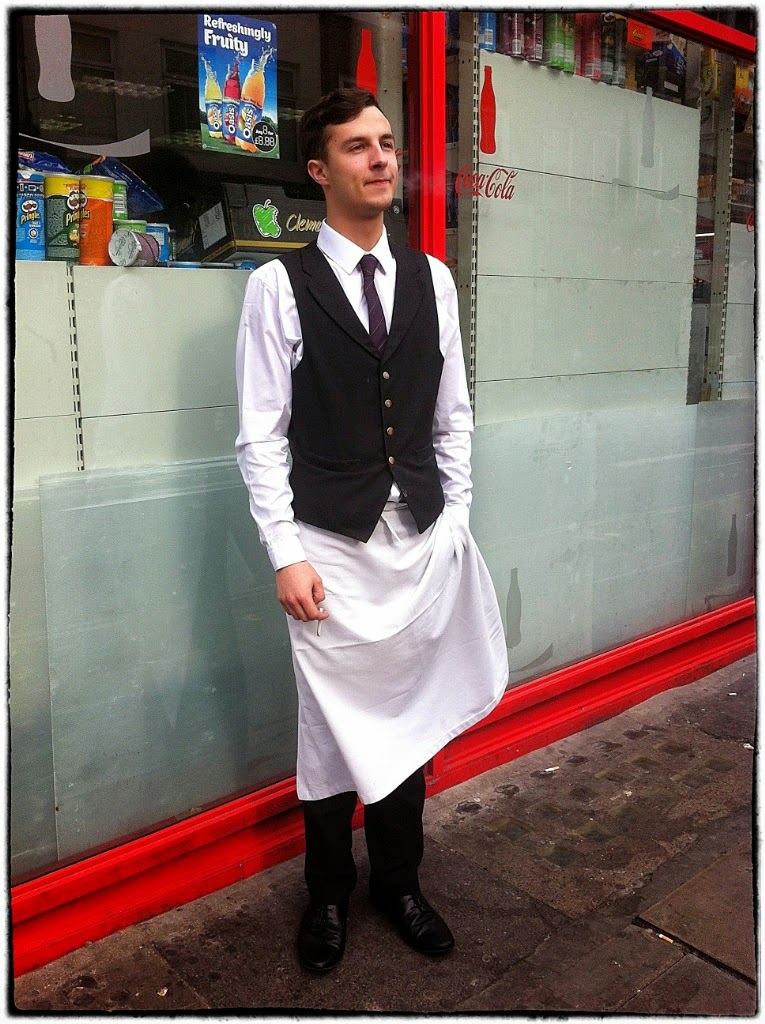 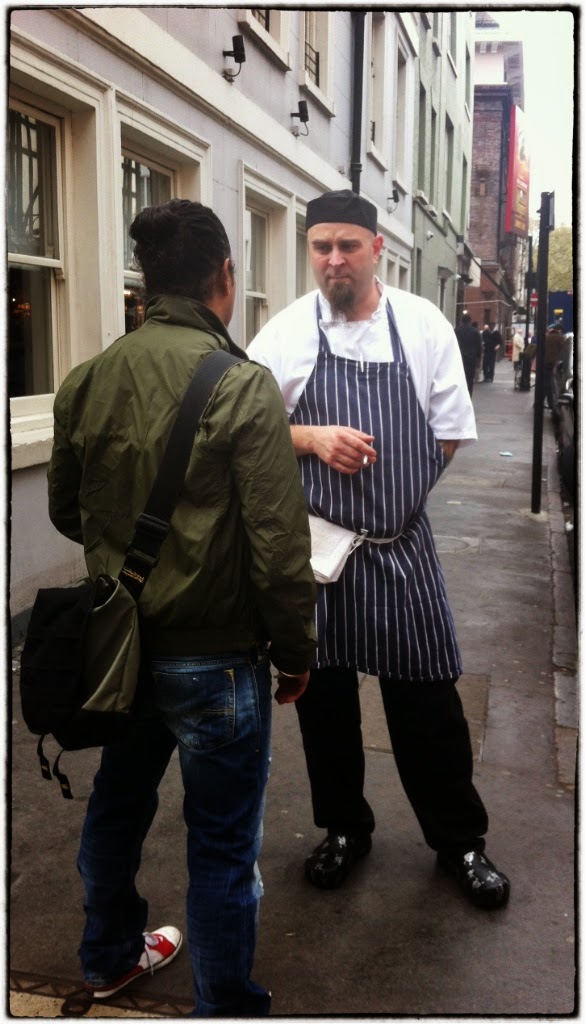 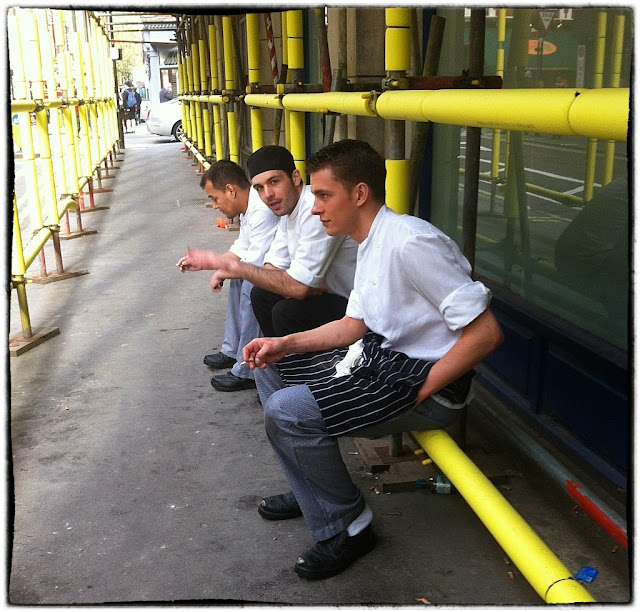 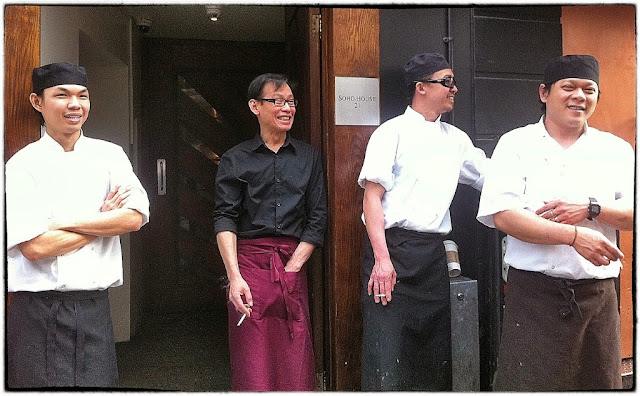 As I came out of Churchill’s I saw chefs, front of house and kitchen staff outside almost every restaurant in Soho, smoking in their whites and blue striped aprons.

I’ve been reading The Spaghetti Tree, about the trattoria revolution in London in the 1960s. I walked along to 22 Romilly Street, to see the original location of La Terrazza, run by Franco and Mario (both of whom had connections to Minori, as does Gennaro Contaldo, as does my Italian family!) It’s now just a private house I think but the distinctive many panelled window is still there. 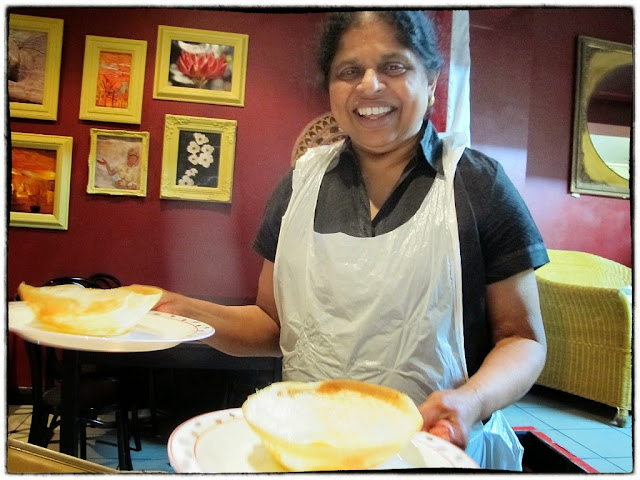 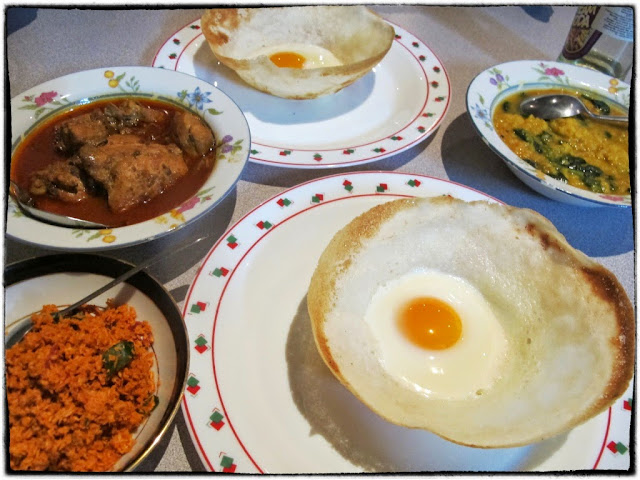 Up the A5 from me, further north along the Watling Road, is Cricklewood, a forgotten village of London. Probably the only known cultural landmarks of this area are Smiths crisps, invented in a Cricklewood garage (fist pump) and the author Zadie Smith, who scene-set her multi-cultural novel ‘White Teeth’ hereabouts.

It’s always dirty along the A5. There has been various attempts to gentrify Kilburn and Cricklewood but nothing has succeeded, bound as it is by that endlessly filthy straight highway interrupted only by the North Circular. But there are a few restaurants that are worth visiting. Persia II, run by an ex-political journalist escapee from post-Shah Iran. And Lihiniya, which has a very casual attitude but nonetheless superb food from a woman chef. My friend Les and I walked into an empty restaurant. There was no menu. A family was sat in the back, amongst shop shelves selling Sinhalese products.

“Are you open?”
The woman stood up, smiling, and said “We want to go home early tonight”.
Les sweetened them up by saying ” I’m Malaysian Chinese!” Not sure what this had to do with anything but it seemed to do the trick. We were allowed to sit.
“What do you feel like eating?” asked the woman.
“Erm…hoppers?” It’s hard to order from my vague memory of Sri Lankan cuisine when there is no menu.
“I eat meat, she doesn’t” were the instructions from Les.
The woman nodded at me then to Les “You like chicken?”
“Yes”
“Cream soda?”
“Yes”

And that was it. She disappeared for about ten minutes and then we were given a bottle of cream soda and a basket full of freshly cooked hoppers, a kind of concave pancake. Les had egg hoppers which is the same thing but with an egg cracked and cooked in the middle. They were gorgeous. I had spinach dhal and coconut sambal. Simple. Delicious. Scoffed the lot. Didn’t even share. Les got a dish of chicken on the bone, which pleased him no end.

“Why do European restaurants always serve breast?” he muttered “it’s not even the best part”.

We ate quickly and paid under £20 for two.

Googling the restaurant for the purposes of this piece, I came across a local blog Gullets over Broadway, which has sadly stuttered into silence. They had exactly the same experience at Lihiniya. In 2009. Unlike restaurants all over Britain, Saturday night is when they like to close. I’m not quite sure when you are supposed to go. In the morning? 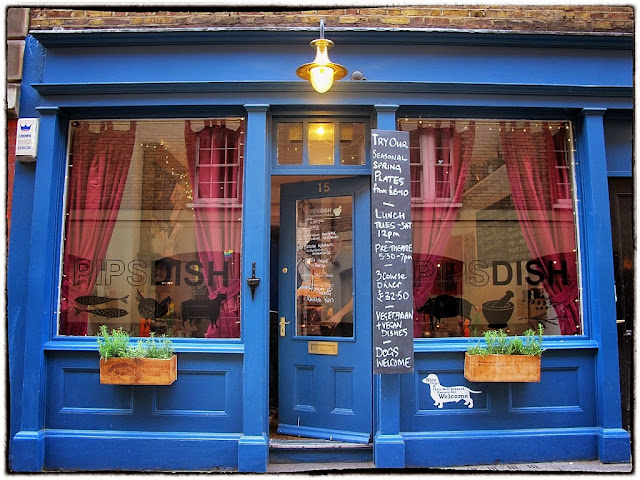 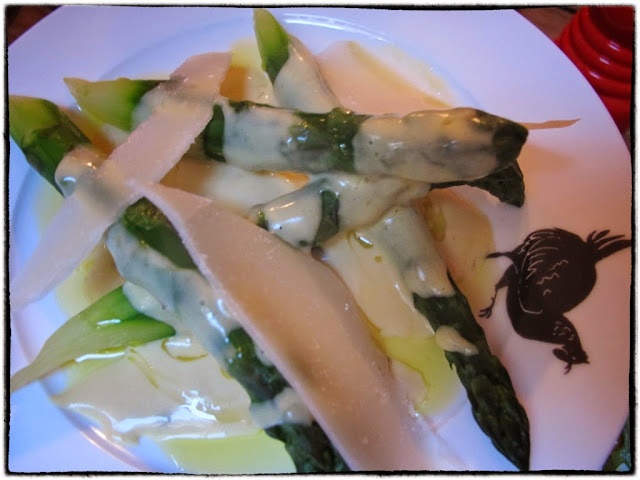 Phillip Dundas is silver-haired and silver-tongued, with periwinkle blue eyes. After running a pop-up in Islington in an old Citroen garage, he’s now got the backing for a little restaurant in Covent Garden, which looks like a domestic living room.
There was an outstanding dish: just-in-season asparagus with anchovy sauce but the rest of the food was rather meat-based for me. 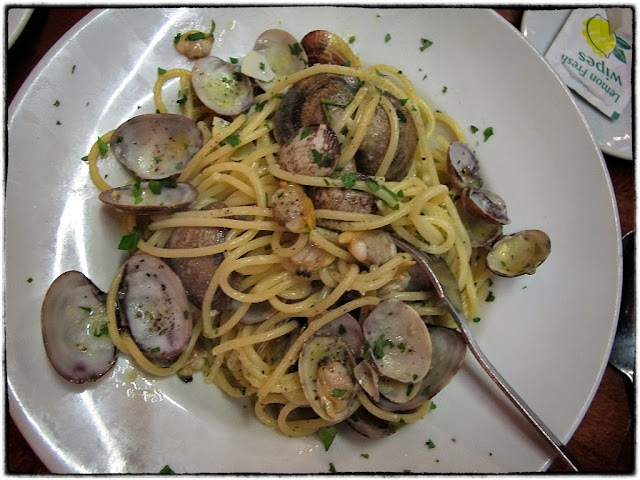 I was still hungry and so I went out for dinner immediately afterwards for spaghetti vongole at Sartori. It was the second night I went there for the same dish. The first night, after the Pink Lady Photography awards, I, slightly drunk, tried to jump the queue by claiming that I was a ‘Spaghetti Vongole Inspector’. Amazingly, this seemed to work.

The spag vong was superb: enough pasta, correctly cooked, tons of garlic, plenty of olive oil. Perhaps more white wine would have been good and a fleck of chilli. But the best spag vong so far on my quest around London. But on the second night, not so much: the sauce was watery, the garlic ratio was diminished. Should I try a third time? Just goes to show that you can’t judge a restaurant on one visit though. 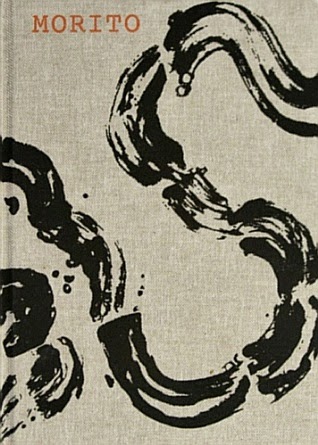 Before Ottolenghi, there was Moro, delivering a similar ‘premium casual’ dining experience with top quality Hispanic and Middle Eastern derived ingredients, thrown together seemingly without effort. It’s like those women who appear not to be wearing makeup and have artfully tousled hair: it looks easy but it isn’t.

I visited Moro little sister Morito in Exmouth Market. I’ll go to anything in Exmouth Market because my mum and dad live there! Morito has an eponymous cookbook out which has some accessible recipes in it, particularly a squid ink bread which I first encountered in Paris.

I couldn’t stay long at the Morito launch because I was actually invited to the World’s 50 best restaurant awards. Outside in the courtyard in front of the 12th century Guildhall, chefs gather, chat and have their pictures taken; you hear Spanish, Swedish, French, Italian drifting on the wind. This is probably one of the few opportunities they have to meet each other. All that graft in the kitchen, the hours and weeks and years of pale-faced sweaty toil, this is their moment in the sun, literally.

I didn’t recognise most of them, not being accustomed to eating in top restaurants around the world. Basically if I don’t get a freebie, it ain’t gonna happen. High end food isn’t my kind of food, but it is good to try, to see, to get inspiration.

One woman was walking around carrying a bulging pillow. Why are you carrying a pillow? I asked her (thinking yeah I know the countdown is boring but still…) She is called Alessandra Tino and she is doing a project in which she photographs chefs laying down on a pillow. After asking what I do, she asked if she could take a picture of me on this bolster. So I laid down on the purple carpet on the white pillow and she climbed over me and snapped.

Nova: the future of food in London

During a tube strike, the smart PR with a budget makes sure journalists/bloggers will attend by sending a cab for them, both there and back. (I hate it when they only send a cab for you to get there, then leave you stranded for the way back, very cynical). I wasn’t really sure what this event was about to be frank. It seemed to be organised by property developers Land Securities who are trying to make the area around Victoria (specifically their development) into a hip place. Fat chance. It’s so modern and corporate. Only the chains can be there.

The panel were asked about popups and supper clubs; Kate Spicer and Henry Dimbleby were kind enough to mention me, as I was sitting in the front row. I said that popups were born of poverty, that I started a supper club because I wanted a restaurant but didn’t have any money and that this is still the case. This wasn’t really the right forum to say stuff like this, it was full of suits.

Bobby Chinn, restaurateur, House of Ho, is quite a character, with tons of personality. But he said “You need a million quid to open a restaurant in London”. Other remarks from the panel included “Fine dining is dead”. As I said in my post 10 things I hate about restaurants, table linen is a thing of the past: Nick Lander said “I had a meeting with a restaurant linen provider. Five years ago, he supplied 4 napkins to every tablecloth, now he supplies 11”. What this means is that restaurants have bare tables, and the linen supplies are now confined to serviettes.

Kate Spicer said that Londoners go out to eat, sometimes several times a day. Last weekend on Loose Ends on Radio 4, Tim Hayward said that Londoners eat out five times a week. I think this says more about Kate and Tim than it does about Londoners. Before I worked in food, I never ate out except on holiday. Now, using my own money, I’ll eat out (or get a takeaway) once a week.

Are food experts and commentators are living in a bubble? Families in London can’t eat out very often. Henry Leon mentioned that the restaurant trade refers to ‘millenials’, people born between 1980 and 2000. Mostly they haven’t started breeding, have good jobs and can afford to eat out. But many ‘millenials’ are unemployed so while this demographic is more likely to go to a young hipster restaurant or pop up, most can’t afford it. Probably the sector that posh restaurants most depend on are the suits, the business accounts.

One guy, an employee of Land Securities, 24 years old but stylistically looking at least ten years older, came up and asked me where I could recommend buying a good sandwich at lunchtime in Covent Garden. I’m sorry I don’t know, I replied. I suppose he is a millennial.