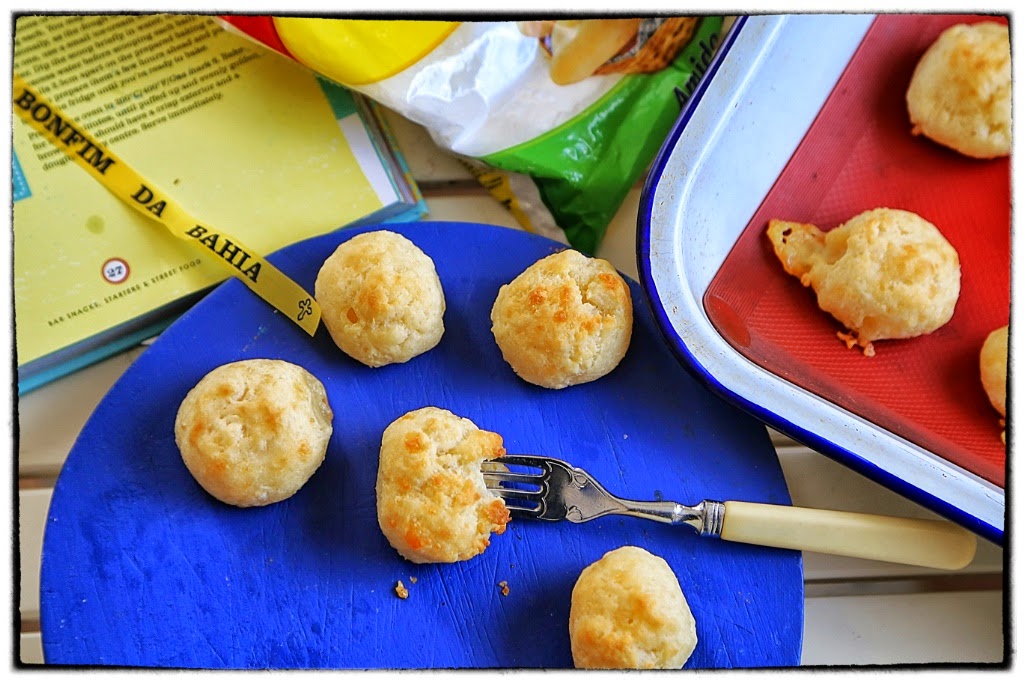 This recipe, ‘pao de queijo’, cheese bread, is adapted from The Cabana cookbook, a beautifully designed cookbook with Brazilian recipes. I’ve tried this recipe a few times from other sources and this one is the best so far. I used something called ‘sour starch’ from Yoki, a manufacturer of Brazilian foods that you can often find in small stores. This sour starch is gluten-free and made from manioc or yuca or cassava. You can really see the African influence on Brazilian cookery with this ingredient; it is popular in Africa and Brazil, with a high carbohydrate count but very little protein. There is also ‘sweet manioc starch’ from the same manufacturers which is finer. A combination of both gives you both the chewy inside and crispy outside of the classic pao de queijo. The most important one however is the sour starch, you won’t get an authentic result without it.

This is a like a New World version of cheese puffs.

Pao de queijo: something to snack on with a few beers while watching the footy.
Makes about 30
Takes about 30 minutes to make start to finish.
125ml whole milk
50ml vegetable oil
1 tsp sea salt
175g sour starch
75g sweet manioc starch
2 eggs
200g strong cheddar (or Parmesan)
Preheat the oven to 200c. In a small saucepan heat up the milk, oil, and salt. Once it starts to boil, pour it straight into a stand mixer then, very quickly, dump in all of the flour and mix on a low speed until the dough is thoroughly mixed and coming off the sides. Then add the eggs, keep mixing on a low speed, until thoroughly combined. Finally add the cheese until fully mixed and you have a smooth shiny dough.
Pinch off small amounts, walnut-sized balls, smooth them into spheres and place on a prepared (with parchment paper or a silicon mat) baking sheet. Bake for approximately 15 minutes until golden. Eat straight away while hot. Great with hot sauce and a cool beer.
Note: