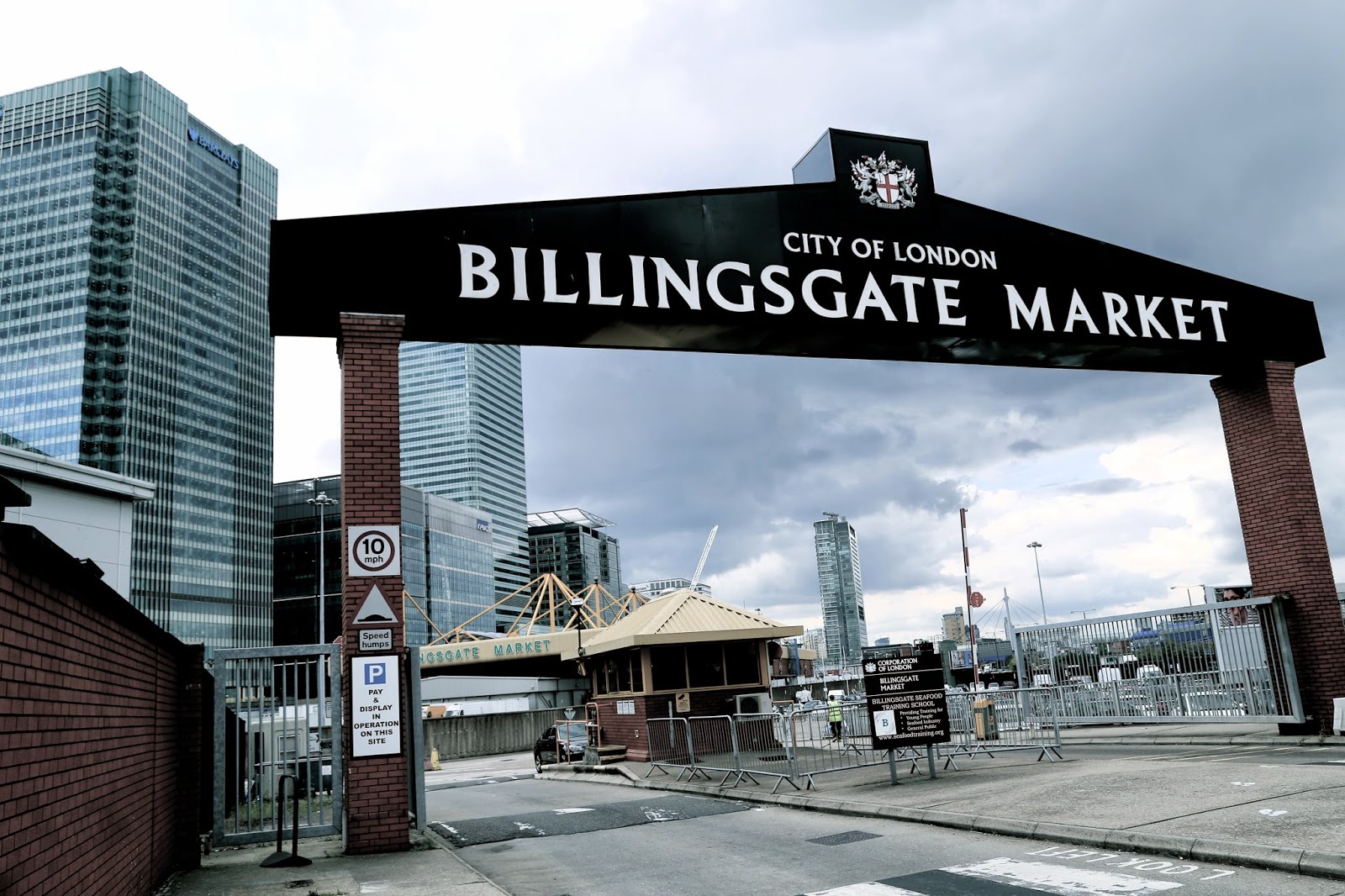 Rising at 4am to reach the market at Canary Wharf, walking down the wind tunnels between tall green glass buildings. Traders from the city and traders in fish, it’s all the same thing. Ken Condon, 76 years old, 46 years in the fish trade, takes us around Billingsgate market. I’m the only woman amongst the men. There is one Sri Lankan guy who works in the fish trade. The others are cooks and smokers, as in, they smoke fish.
What Ken doesn’t know about fish isn’t worth knowing. He sprints up to the white polystyrene boxes, digs his hand in, peers at the fish critically with an expert eye.

‘That one should have been sold a couple of days ago’

The fishmonger selling it smiles and Ken winks at him ‘There’s always tomorrow eh?’

Ken says, as an aside, sotto voce ‘Tomorrow’s Saturday, the day the public come to buy’.

The implication being that the public, who don’t know what’s what, will buy this fish.

‘It’s all right, but it’s not at it’s best’ he reassures us.

‘How do you know that a fish is fresh?’ Ken asks us, picking up a fish by the eye, a thumb and finger in each socket.

‘The eyes don’t matter really. What you want is to pull open the gills.’ Ken fans out the slit in the neck of the fish. 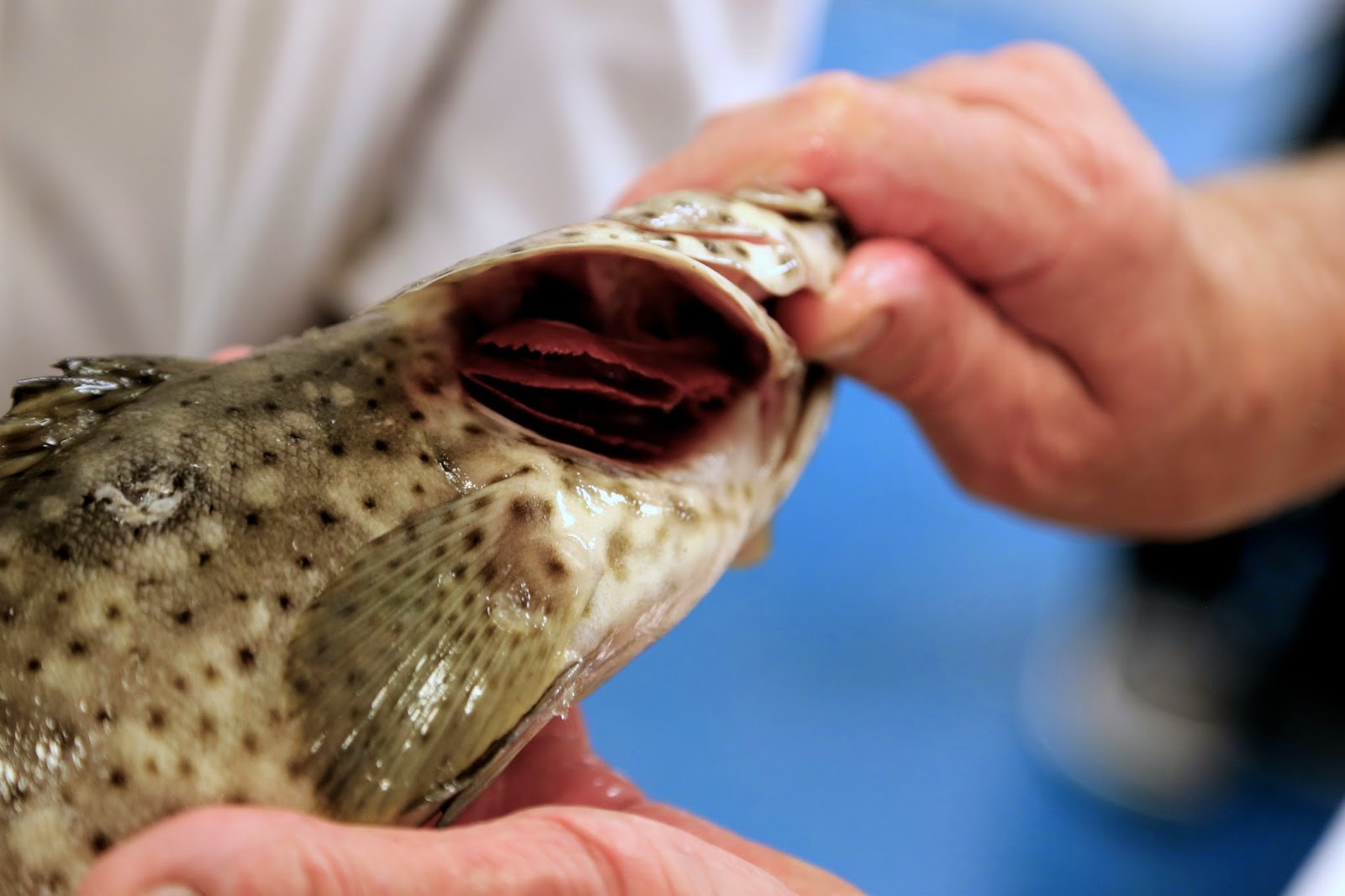 ‘What colour is the blood? Is it dark? That’s old. You want red gills. Press the flesh, is it firm? You are looking for body tone and lustre. It should have no smell. Hold the fish up, does it have rigor? Rigor mortis. Then it’s fresh.’

Ken pointed at some Icelandic halibut, pale, overspilling the box with their length: ‘These are £400 to £500 pounds each. The bigger the better’ 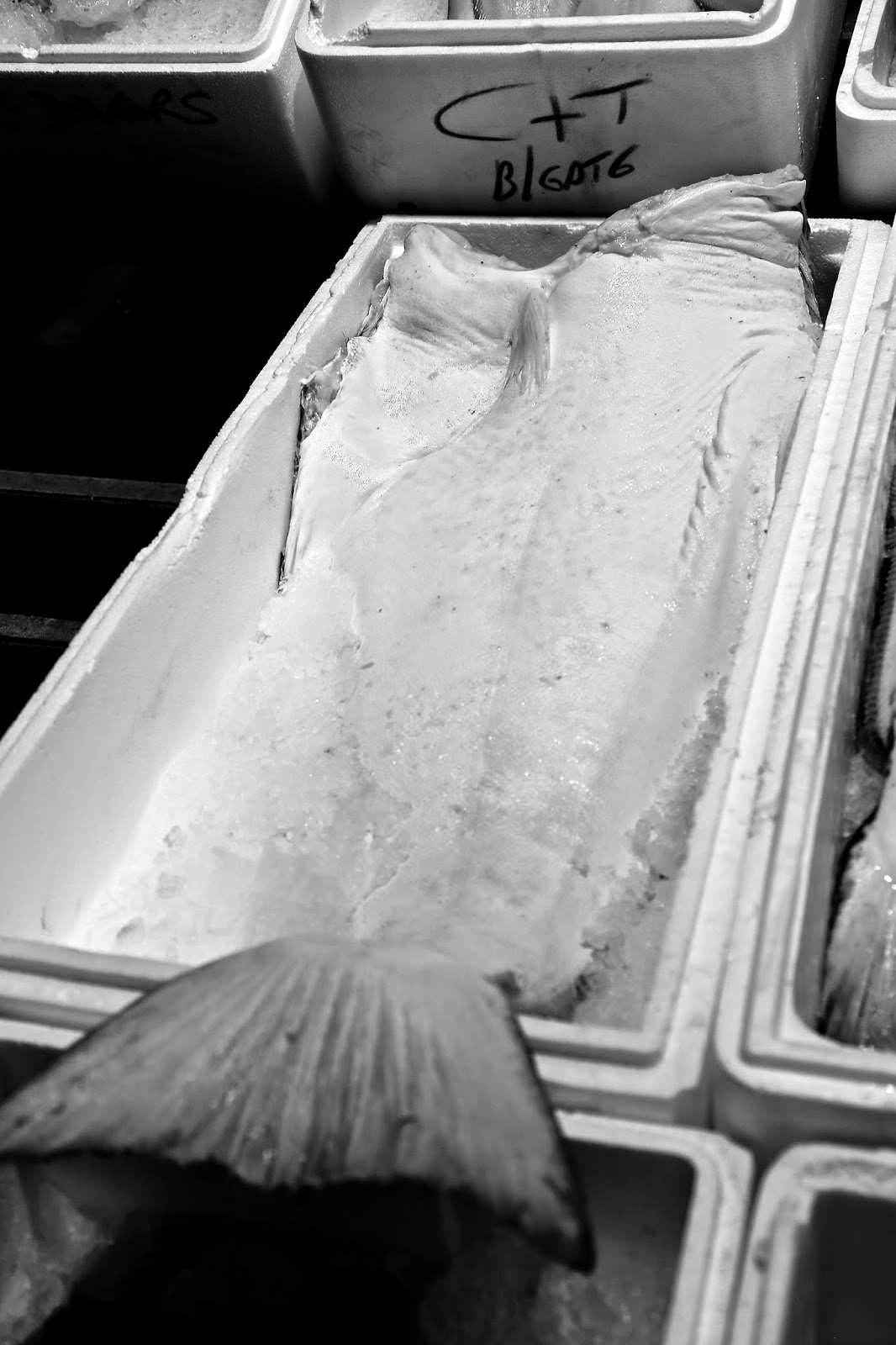 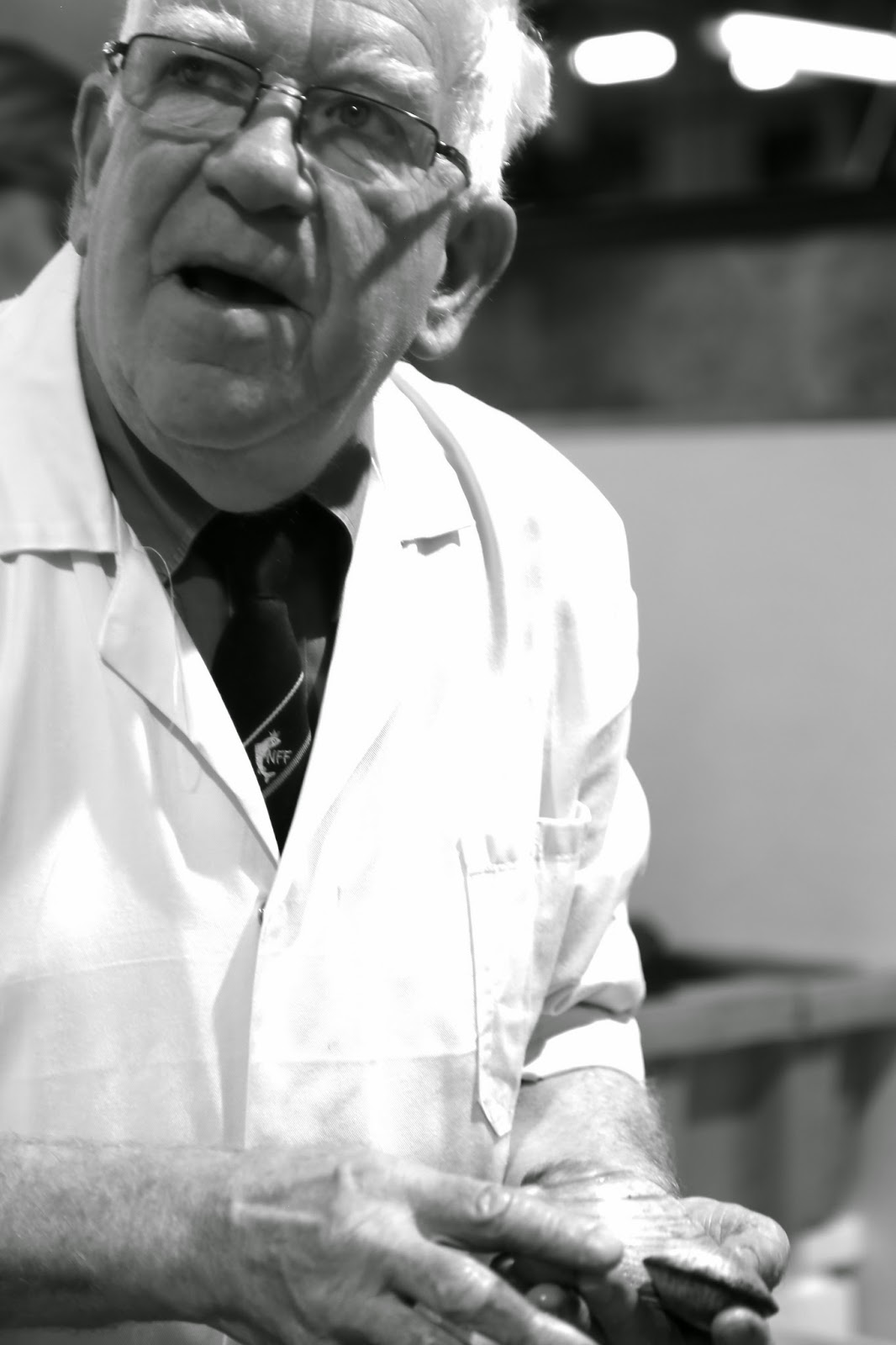 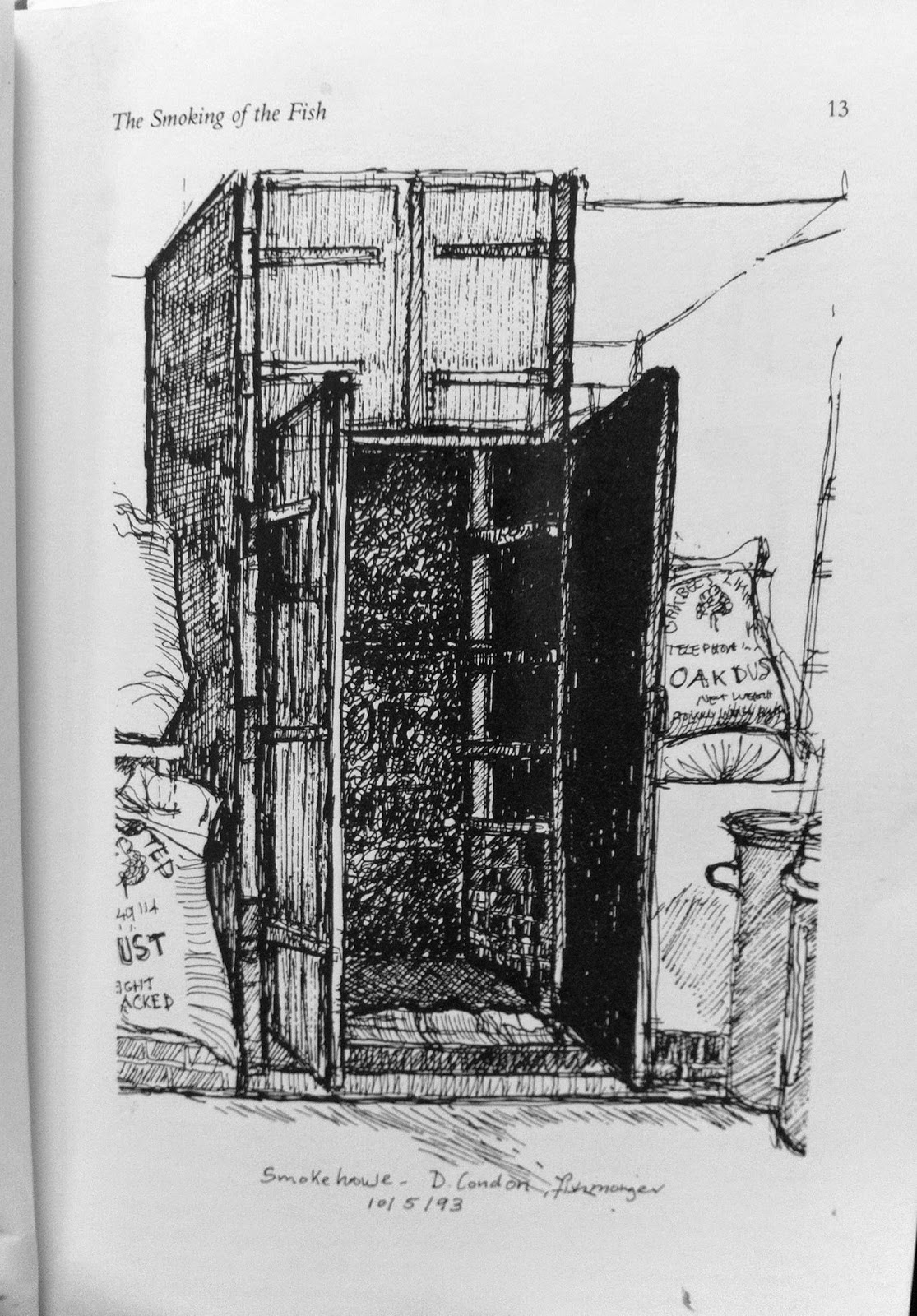 Ken ran a ‘wet and dry fishmonger’ in Vauxhall, Condon fishmongers. Eventually he sold it but the new people couldn’t keep up with the work and today it is a hairdresser. He had an old kiln, with a brick dated 1902.

‘Nowadays smoking is done in a modern kiln. But you get a better smoke in an old kiln.’

‘When smoking a fish the curing and salting is the most important part. I use large salt to take the moisture out. Then I wash it, brush the flesh then drain it before smoking.’

Can you freeze smoked salmon? ‘Don’t advise it. I don’t like vacuum packed smoked salmon either, it spoils quickly once opened.’

As we bolt through the market, Ken talks rapidly, a sequence of staccato sentences, like the Word of God. This is hard-worn experience talking. I try to note it all down, but he goes so fast.

Ken thinks commercially. He thinks about which fish is easy to prepare and which fish you get a good amount of flesh from, that you can filet easily. He also thinks about how long the fish lasts. All this affects the profitability of a fishmongers. More….

‘Going over’ is fishmonger talk for ageing. ‘Sometimes the fish has to relax. The rigor’s got to go off.’ I remember I had very fresh cod in the Shetlands, it had no flavour at all. It needs a couple of days to mature. 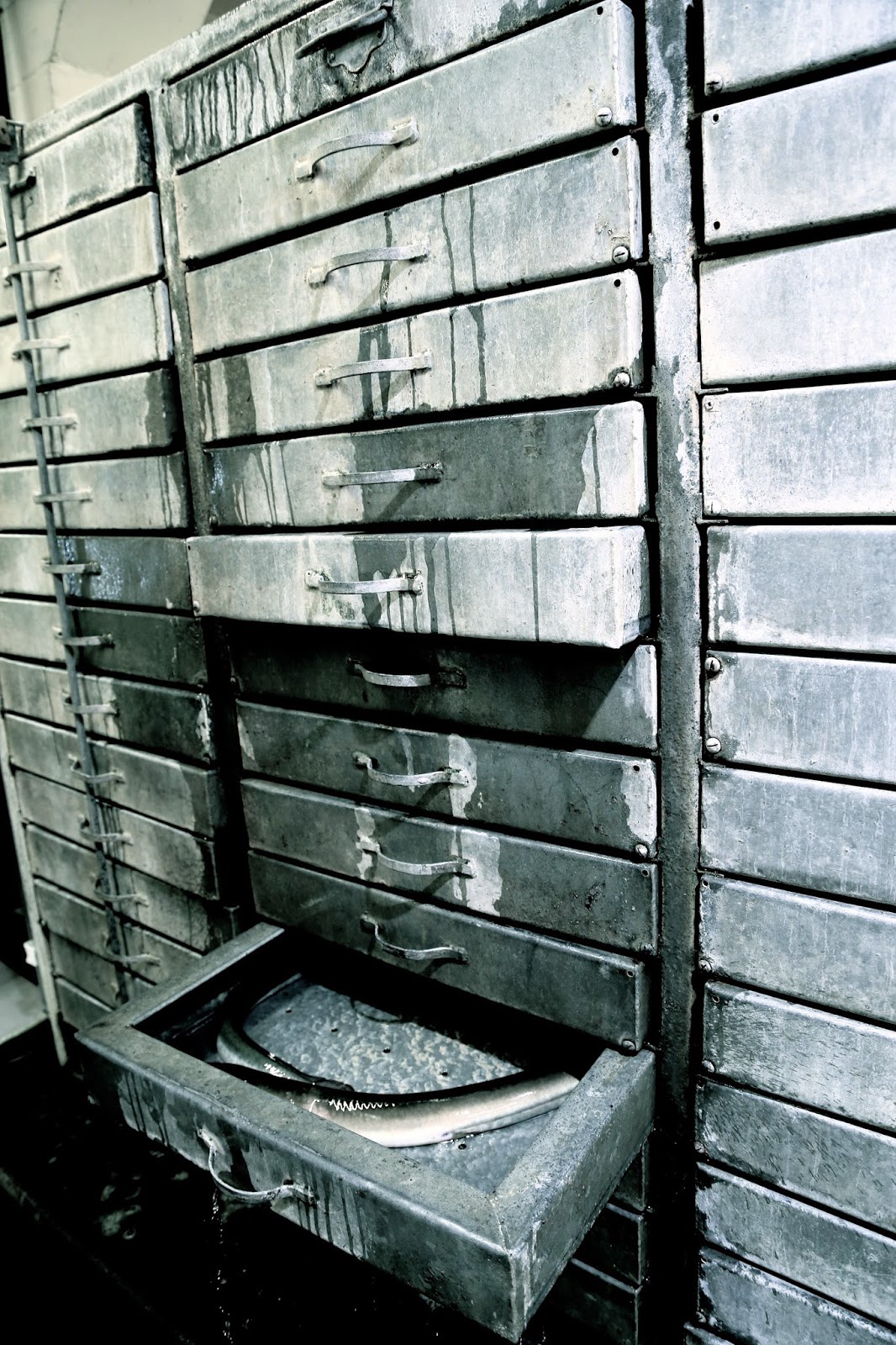 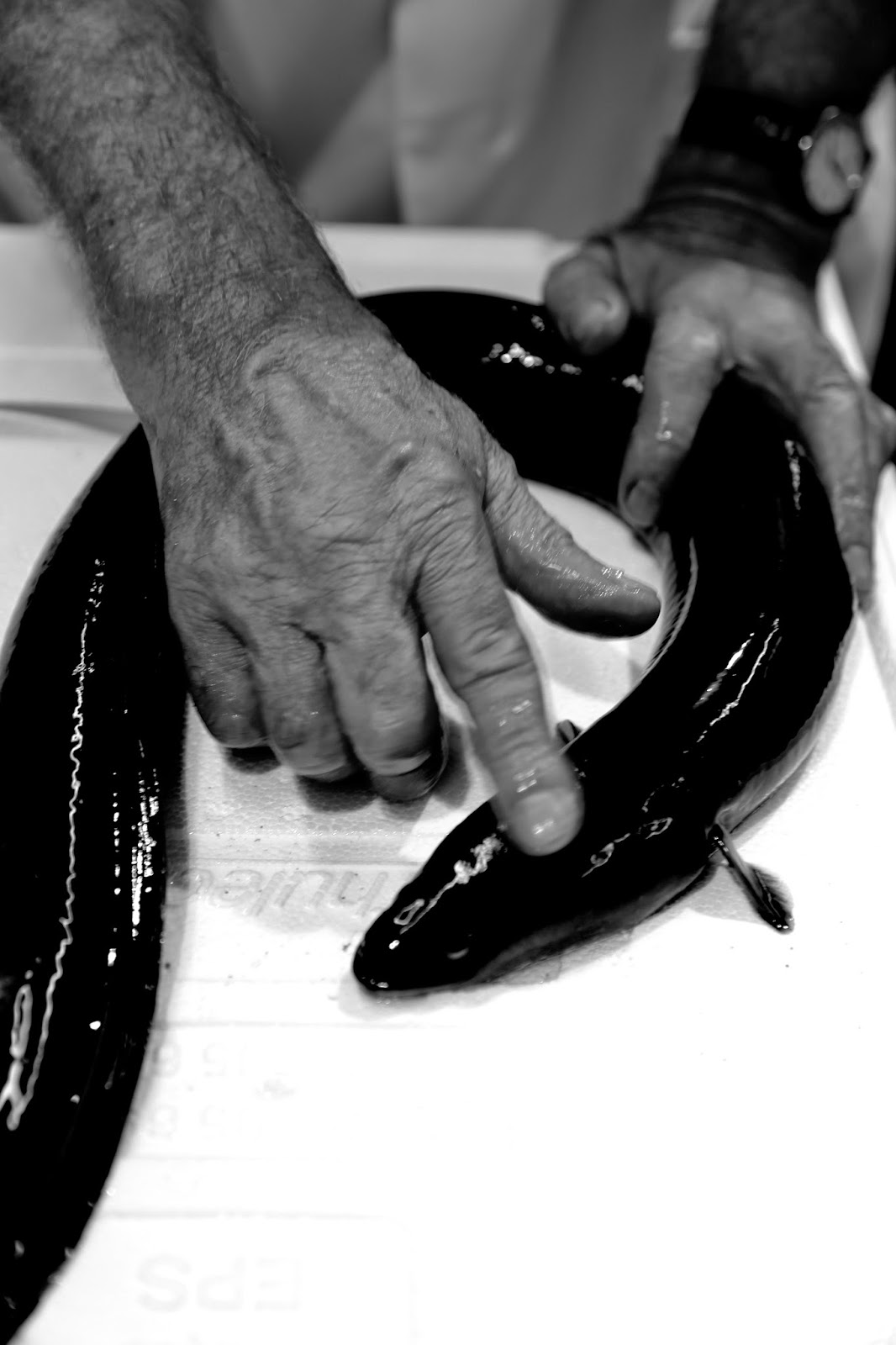 Ken stops at a bank of metal drawers which contain eels. Londoners ate eels until the railways came. The Dutch saved Londoners during the plague, otherwise they would have starved. No one would come into the city to feed them. They’d send their barges up the Thames and send their wives in to sell eels. He carefully takes a black eel from a drawer and places it on a table while stroking the top of the head. The eel becomes drowsy. It’s like taming alligators. 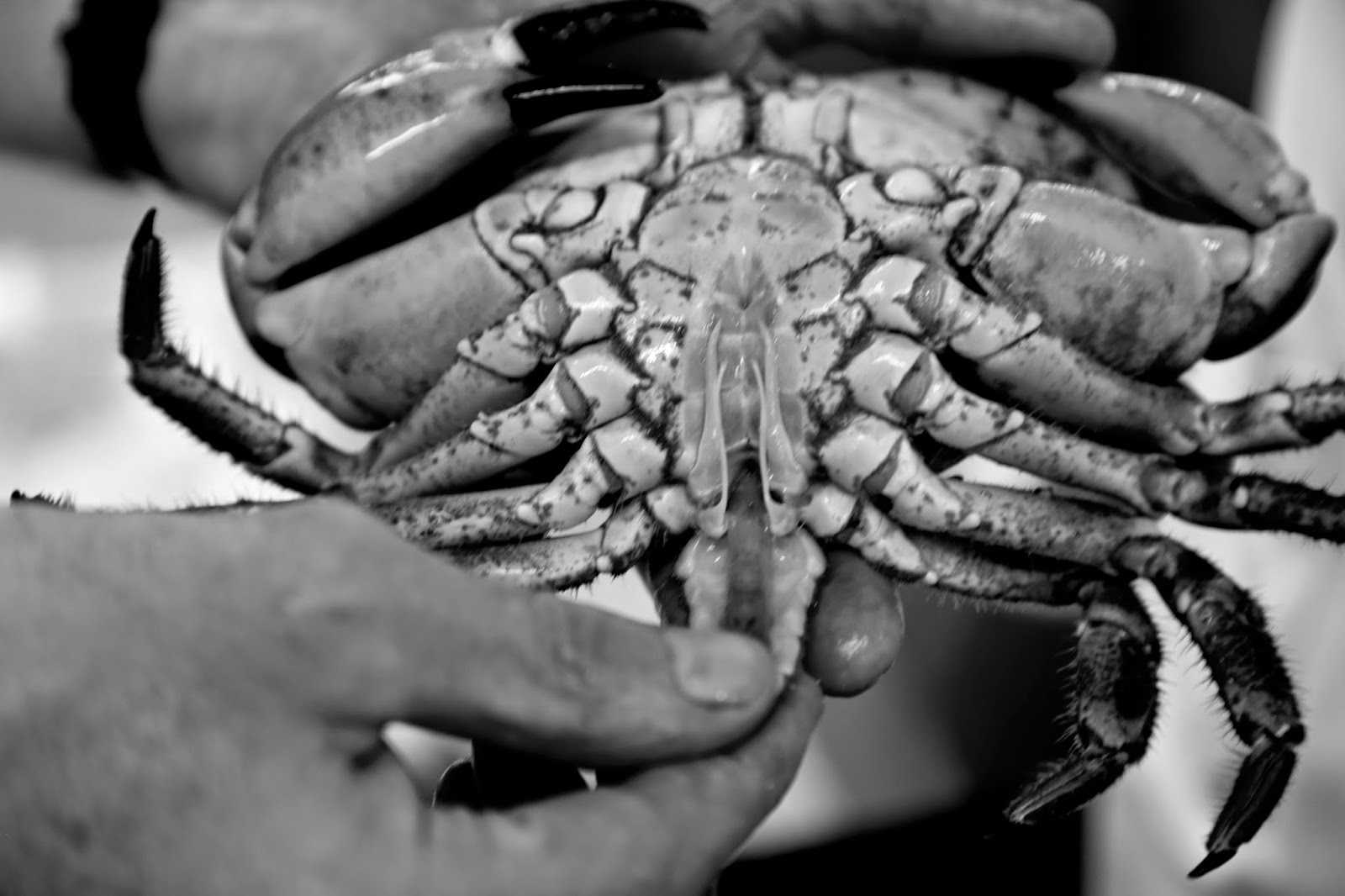 Ken pulls out some crabs, a male and a female. He shakes a crab ‘if it rattles and clacks, don’t buy it, it’s full of water’.

There is still a market for dyed smoked fish. The English buy with their eyes, not their taste buds. 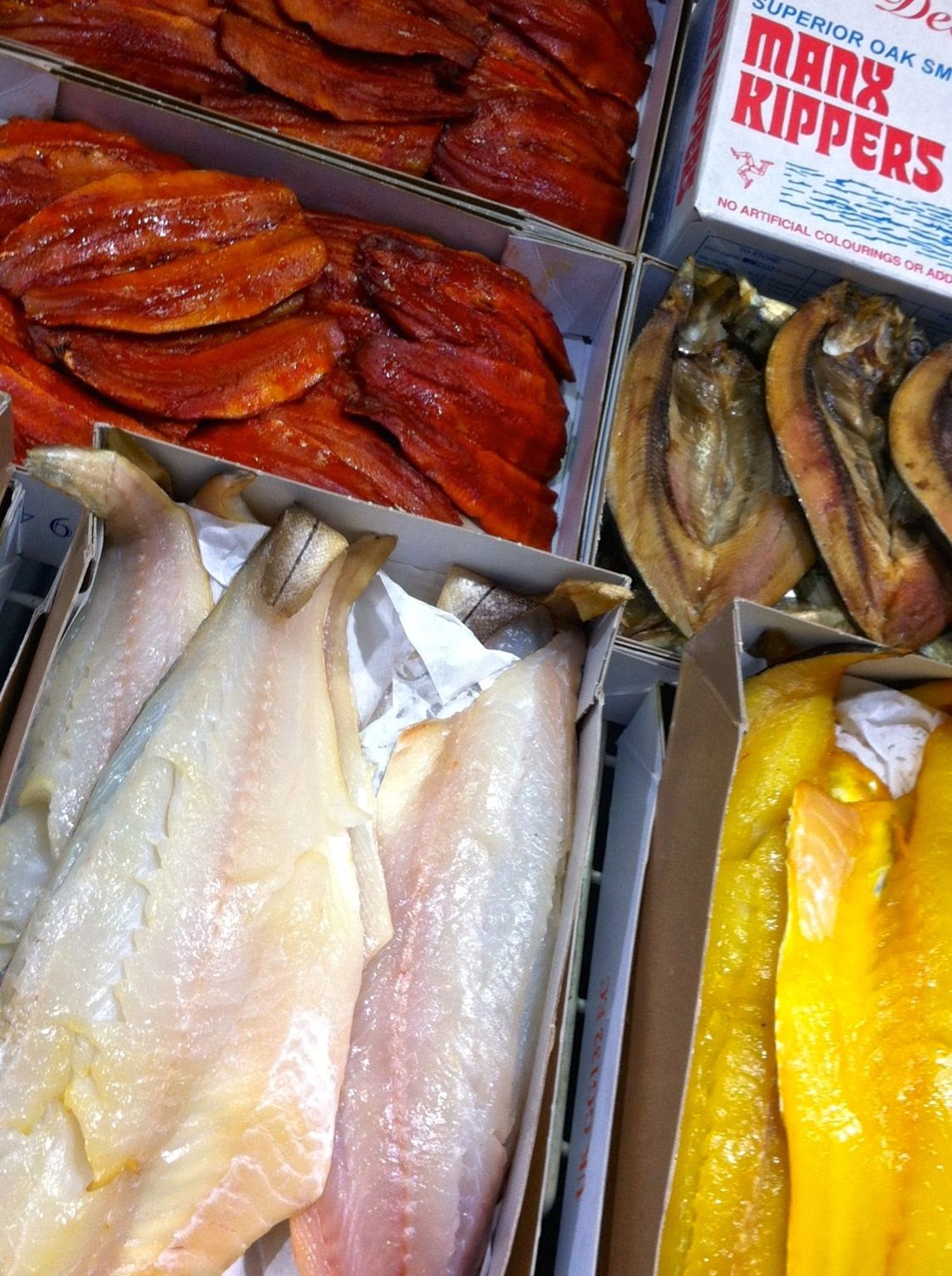 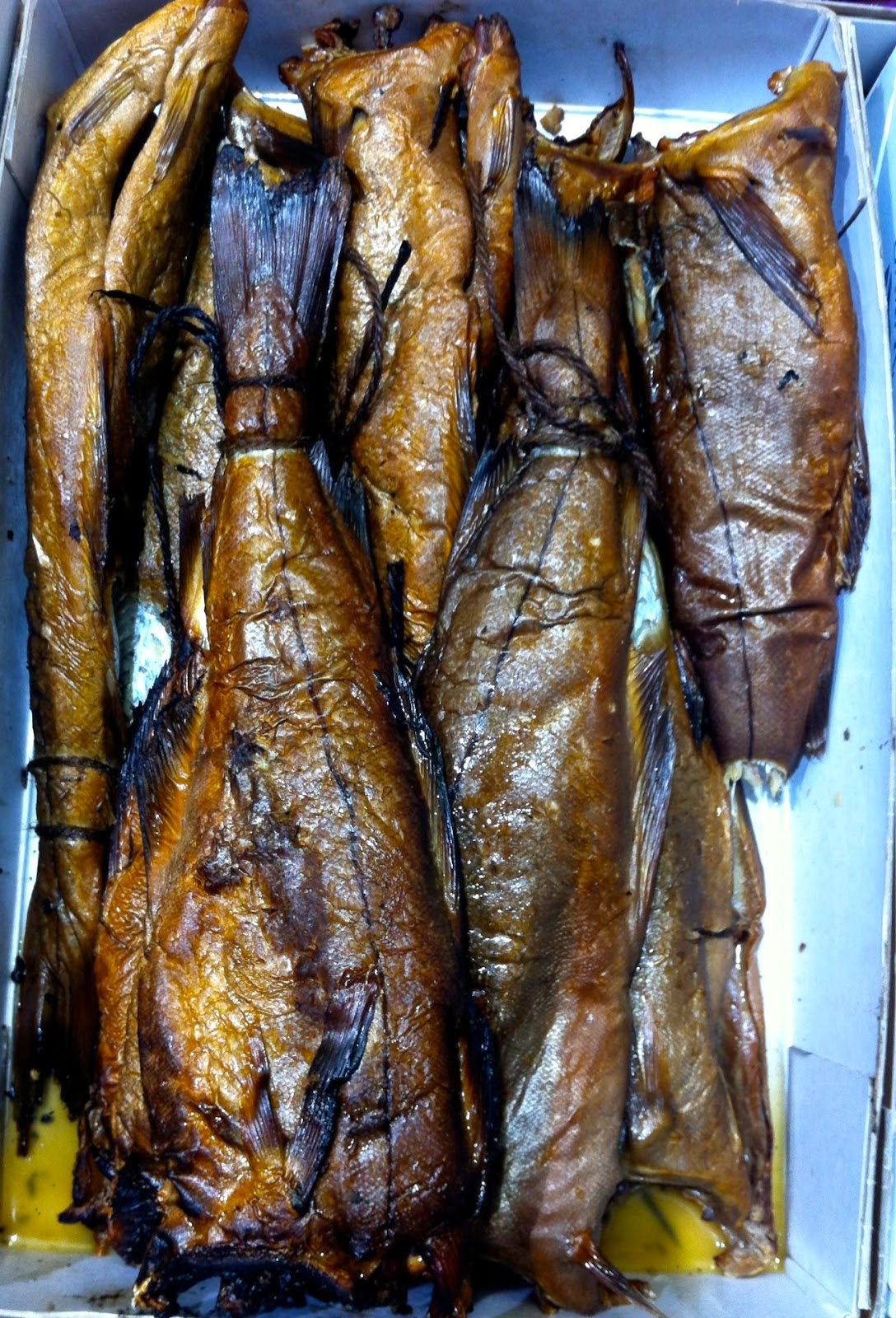 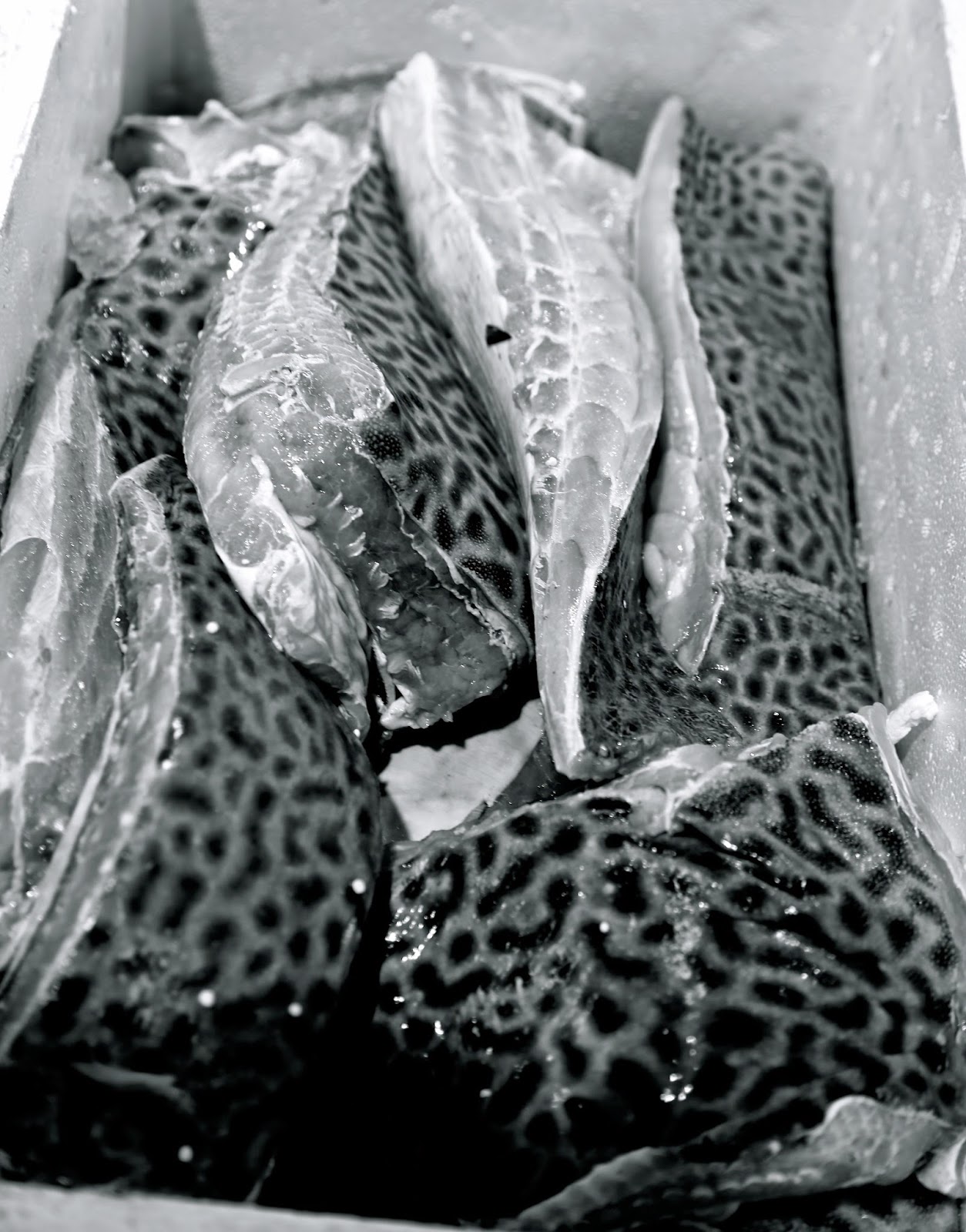 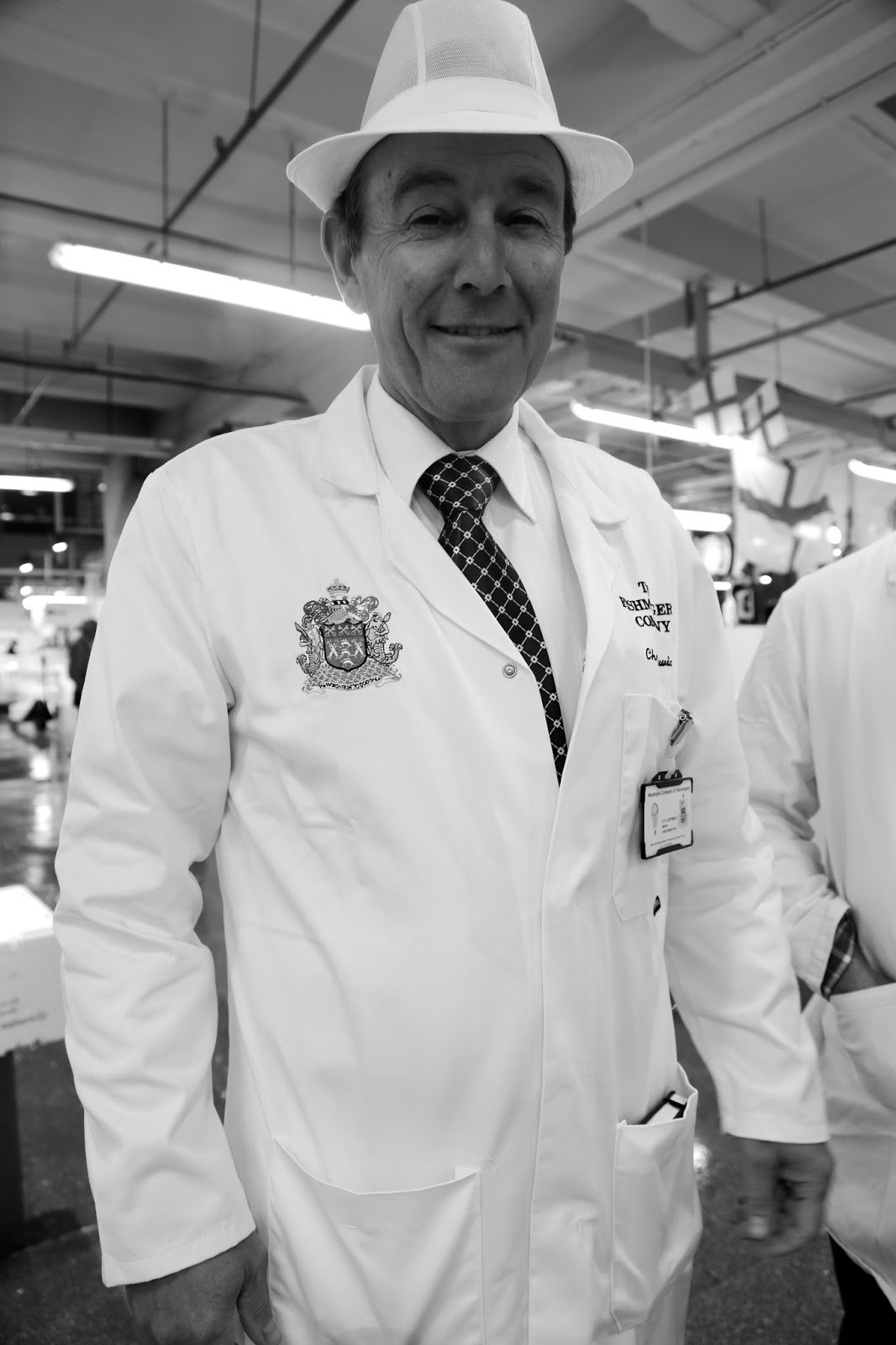 In Billingsgate there are three fish inspectors, employed by the fishmongers company, a livery company started in 1272, a 700 year old guild, they take a sample from each batch and test the quality. As a result, London is a very safe fish market. 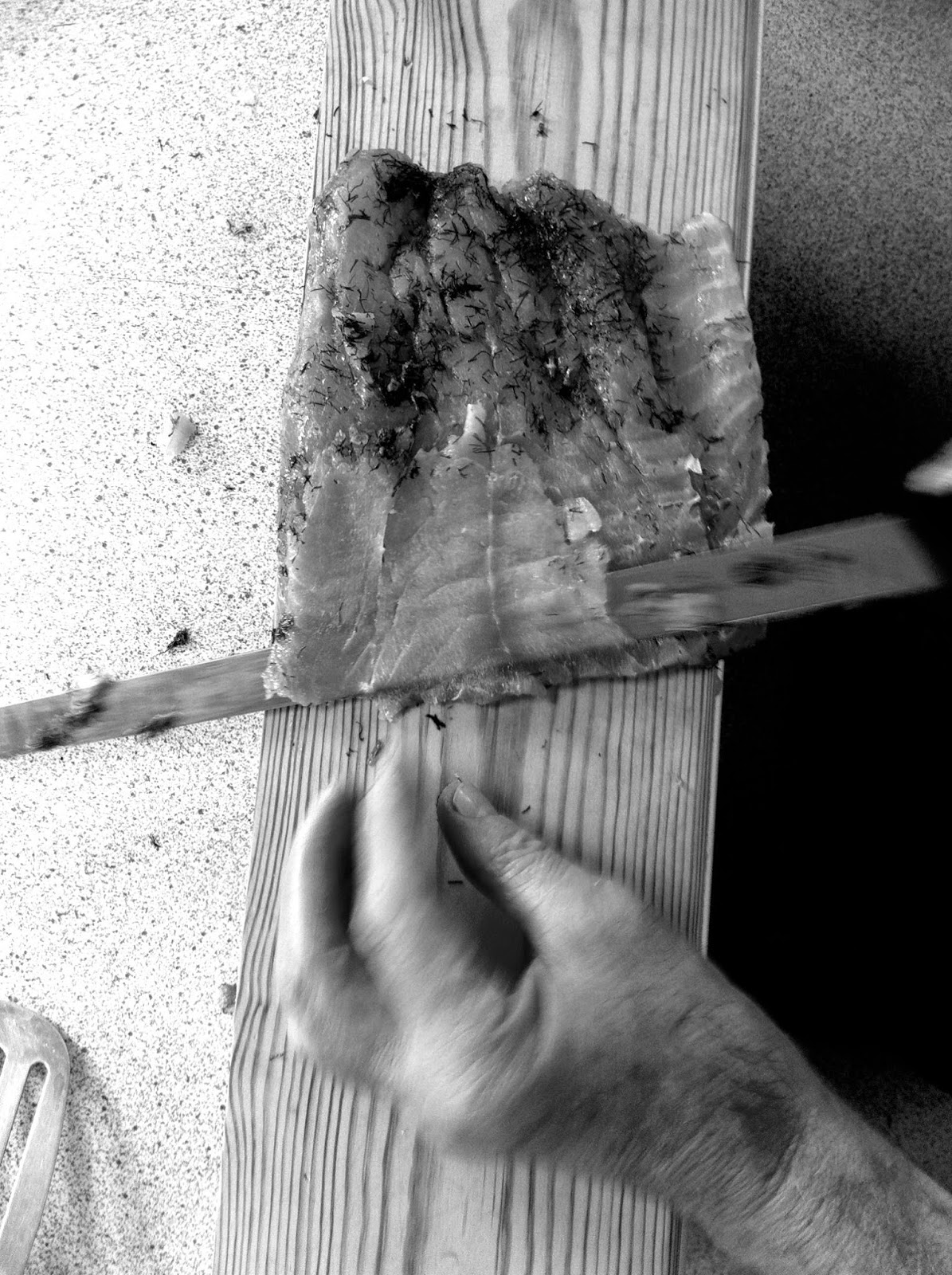 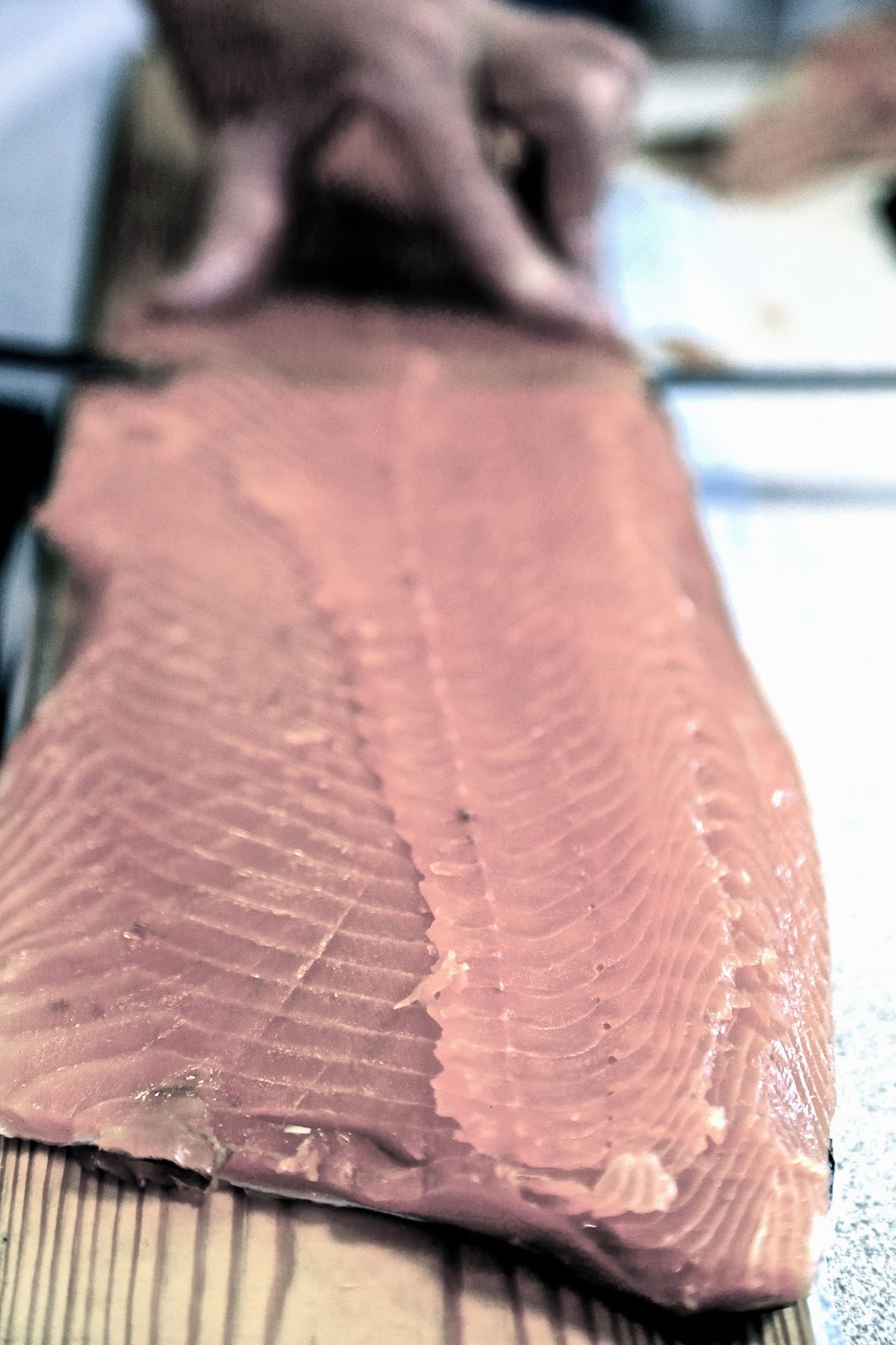 Long cut
The second part of the day we went to the kitchen and learnt how to make good fish stock, salted cod, gravad lax, escabeche, brandade, hot smoked prawns, and how to filet and gut a fish. This is all informations for other posts!
I did this tour courtesy of Billingsgate Fish Cookery school. Highly recommended.