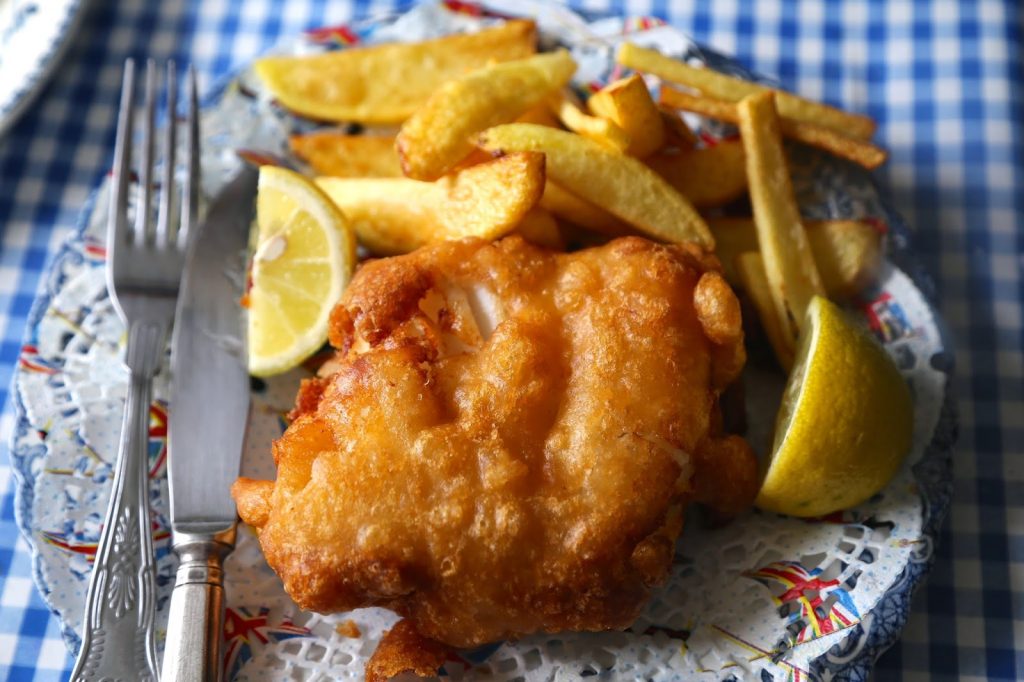 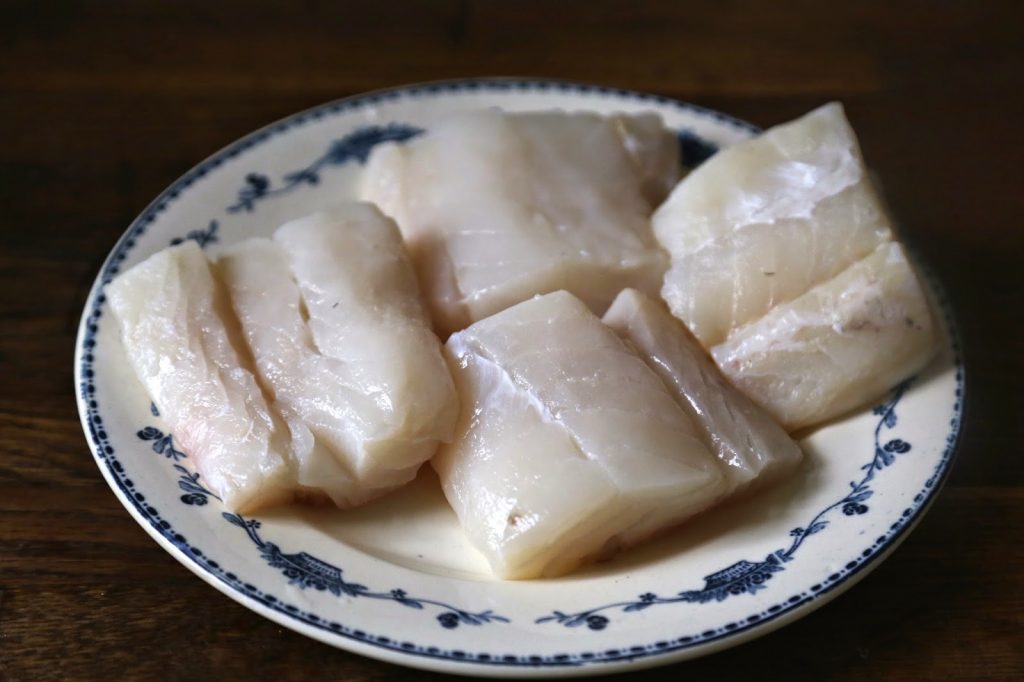 News has just come in that Kabul, the capital of Afghanistan, a land-locked country, has its first British-style fish and chip shop, A classic English dish, fish and chips were introduced to this country by Portuguese Jews in the 16th century. But you can’t get decent fish and chips in London: I’ve tried all the recommended places and none of them are all that. Although I’ve yet to try Bonnie Gull in Exmouth Market, a specialist fish restaurant, run by my friend Luke Robinson,  about which I’ve heard good things. My parents, who live in that street, and always have fish and chips on a Friday, recommend Bonnie Gull. Their other fishnchip hangout is Kennedy’s, round the corner in Clerkenwell, on Goswell rd. The main reason for visiting is to see the train of black cabs parked outside on a Friday night, with drivers lining up, wearing their green cabbie badges around their necks, for fried fish. A truly cockney experience.
The best fish and chips I’ve ever had was in Birkenstead, near Liverpool. I was taken there by my mate Derry, an Amazonian blonde Liverpudlian with a quick wit and the ability to drink more than any other woman I have known. (With the possible exception of another Scouse woman I knew in France who, one night when I was with her, drank 5 litres of rosé by herself, one of those big plastic jugs, and was still standing).
Derry and I and my kid looked at the counter; the hot glass compartment where they usually keep the fried battered fish was empty. “Oh they’ve run out” I lamented.
Derry looked at me sideways “we’ll have two cod n chips!” her voice rang out.
To my surprise, they took fresh fish, battered and fried it right there in front of our eyes. Being a cockney (all Londoners are cockneys to Liverpudlians) I’d never seen this before.
We ate our dinner from paper soggy with malt vinegar and salt, fingers warmed by the moist potato, crispy golden pillowy batter and scorching pearlescent fish. Food always tastes better when you eat it outside, in the biting wind, by the sea.
In January I went to the Norwegian embassy in London for dinner. It was down a street I’d never been into before, a private road, Kensington Palace Gardens, lit by gas lamps. Going to posh parts of London is as bizarre as visiting a foreign land. Along the dark wide avenue, so much secret space in the centre of London, stood armed policemen, guarding all the different embassies. I asked the way and got chatting. “Somebody just bought a house here for 90 million pounds” one Diplomatic Protection Officer said.
Behind the wrought iron gates of the Norwegian embassy, Michel Roux Junior was hosting the dinner in the grand dining room. It was held to publicise the existence of ‘skrei’, a type of Norwegian cod that is seasonal, fished in the winter months and sustainable. Michel Roux Jnr is very charming and modest, easy to talk to. A fan of skrei, “it’s got big white flakes, a wonderful texture” he told me.
Afterwards we talked, his kids attended the French lycée in London like my daughter. I mentioned Madonna, whose daughter Lourdes went there at the same time. Michel Roux Jnr felt the same way as many parents: “I had to work so hard to get my children into the school, I had to petition the French ambassador and we are both French, my wife and I…”
I chipped in “and Madonna has only a very tenuous link with France, her mother was partly French Canadian” continuing “I had to move country to get my daughter into the lycée, move to France for a year”.
Then I told the story about how another friend of mine, who is very ambitious and upwardly mobile, moved heaven and earth to get her kid into the lycée, partly, I suspect, to make sure she made friends with Madonna’s daughter.
One day she complained to me that her daughter was upset because of this horrible girl in her class who kept making fun of her clothes. “I went up to the teacher” my friend said “and complained about this Lola.”
Turned out Lola is the nickname of Madonna’s daughter. Then Madonna wrote a children’s book about four nasty bullying English girls, one of whom had the same name as my friend’s daughter… 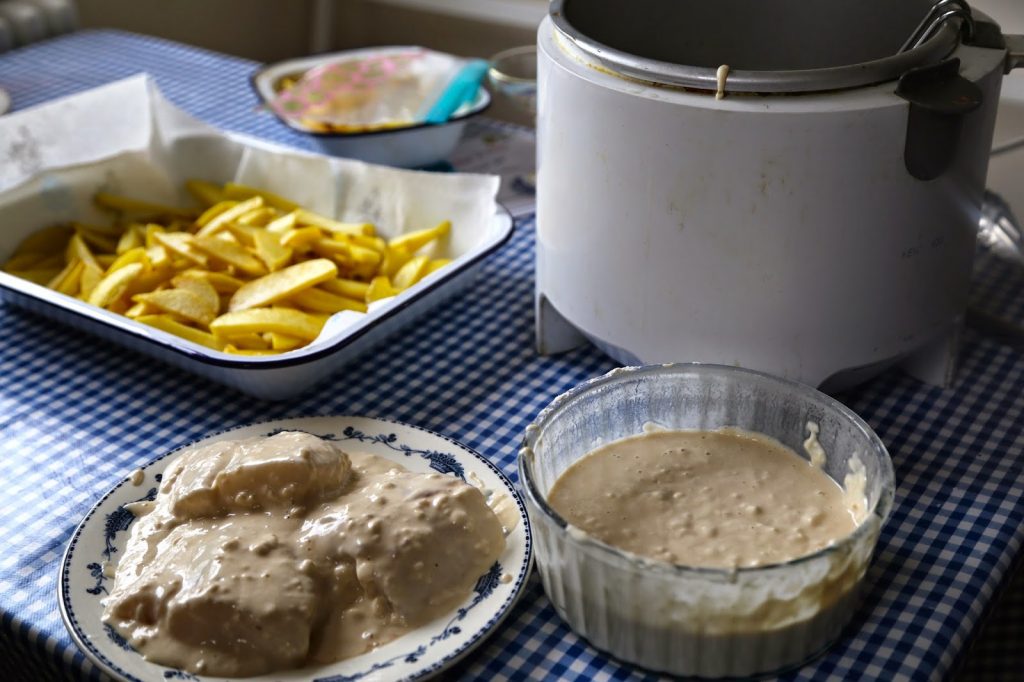 I’m using half of Felicity Cloake’s batter recipe; it was really good, producing a crispy billowy coat, keeping the fish inside moist. Felicity emphasised that the batter ingredients should be very cold, even briefly freezing the flour, in order to get the reaction necessary when the batter hits the hot oil. Ideally the fish is deep fried, I used a special deep fryer.
Start by ‘blanching’ the chips, leave them to rest, then fry the fish. Once all the fish is fried, you can fry the chips a second time.

200g plain flour, cold (kept in the freezer for 15 minutes before using)
1.5 tsps baking powder
275ml cold beer (I used Buddy’s Bourbon Beer with a hint of honey but you could use pale ale, bitter or lager)
1/2 tsp salt
a few shakes of white pepper
4 x 250g Skrei filets, skinned

Prepare the potatoes, cutting them to the size and shape you like.  Then bring the oil to a temperature of 145ºc. Prepare a baking tin lined with kitchen towels. Taking care not to overcrowd the pan or chip basket, fry them for five minutes until translucent. Then drain, remove and put the chips in a single layer in the baking tin. Sprinkle them with Maldon salt. Continue until all the chips are blanched. Raise the temperature of the oil to 185ºc.
Make up the batter in a bowl, mixing until you have a thick cream. Dip each filet into the batter until it is thickly covered.
Make sure there is enough oil to comfortably cover the fish (you will find that the fish and the batter seem to expand). Lower the battered filet into the chip basket which is already in the oil. Leave to fry for around ten minutes or until completely golden.  If you are concerned that the filets are not cooked, use a digital thermometer probe to check that the centre of the fish is cooked, around 70ºc.
Remove the fish and leave to drain on kitchen paper.
Fry the chips a second time at the higher temperature until deep golden.
Serve with wedge of lemon or malt vinegar and more salt.