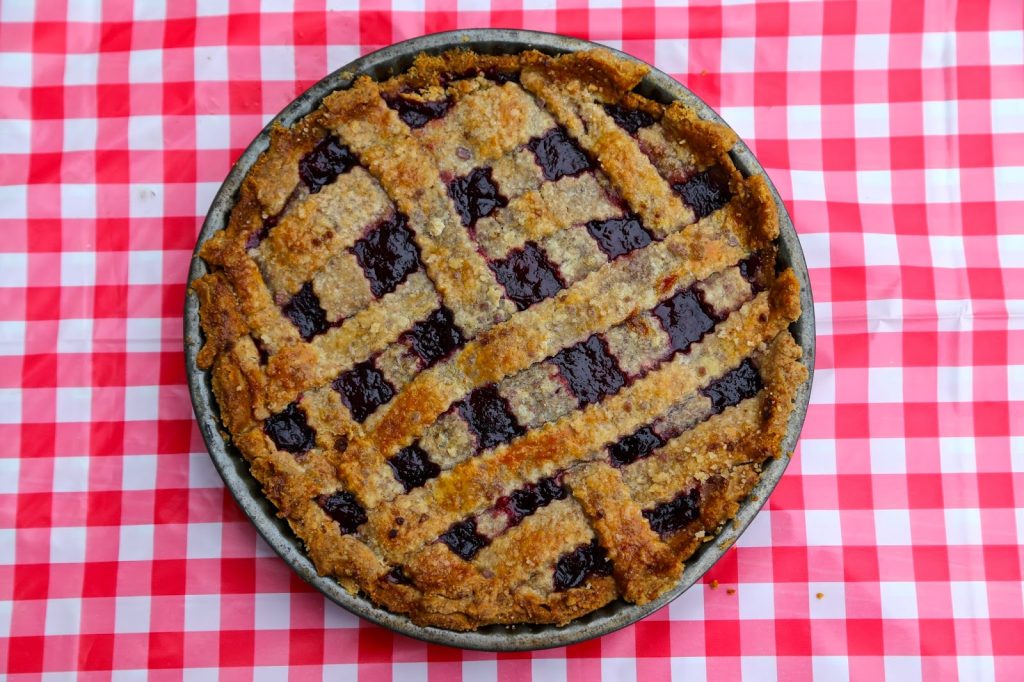 In ‘Labour Day’, the book’s author Joyce Maynard taught Kate Winslet, star of the film, how to make the perfect peach pie for the sexy pie-making scenes with Josh Brolin. Pie has somehow become synonymous with America, a dish as American as ‘mom’s apple pie’. My English mum has never made a pie in her life. Pie is not that big a deal here in the UK, except perhaps for raised pork pies.
There are techniques to be learned, how to make the perfect flaky pastry, how to ensure that it doesn’t have a soggy bottom, and whether to make it double crust (with a top), or single crust, and whether to make a lattice top.
I’ve been mucking about with pretty lattice tops of late, although my technique still needs work. Here is a tutorial from TheKitchn. I made a persimmon lattice pie for Christmas and last week made a bubblegum plum lattice pie. Bubblegum plums, known as Flavorking plums, from South Africa, have a very short season in February/beginning of March; they are a type of pluot or plumcot, an apricot plum hybrid which gives that distinctive flavour.
Recently I was sent a book ‘Whole grain baking made easy’ by American author Tabitha Alderman. As I mentioned before, I’m not crazy about wholemeal flour, except in certain recipes, finding it too heavy, but Tabitha has convinced me otherwise. “Imagine dipping in and eating (some white flour)…That’s the flavour of white flour. It’s almost not there or at least is very faint. Taste a pinch of fresh whole-wheat flour, and it’ll be sweet and nutty.” she writes in the first chapter ‘Why bake with whole grains?’.
She’s absolutely correct. I met E5 Bakehouse’s Ben MacKinnon a couple of weeks ago and we agreed: good flour is the next big thing in baking. Sourcing local mills, fresh flour batches, grinding your own and experimenting with different grains other than wheat is the direction we should be heading in. This book contains recipes that bake with amaranth, barley, buckwheat, corn, millet, oat, quinoa, rice, rye, sorghum and teff flour, discussing the differing qualities of each.
I made a wholemeal double crust, lattice top, bubblegum plum pie, using Alderman’s recipe. Her technique meant that the pastry was not heavy, rather was light and tender.

Make 1 1/2 or double this amount for a double crusted pie:

1 beaten egg to brush over the pastry

I used a food processor to make the pastry, if you do it by hand, you’ll need to ‘cut in’ the butter with two knives.
Sift together salt and flour, then pulse in the butter until you have a sandy mixture. The fat should be covering the globules of flour.
Sprinkle the vodka and 40ml of chilled buttermilk or sour cream over the mixture. Pulse again. Form a ball with the mixture. You don’t want it too wet.
Shape the dough into two flat patties, cover with clingfilm and chill for several hours in the fridge. The author says it’s important for the whole grains to absorb moisture.

Make the filling by putting the sugar, salt, tapioca flour, plums, zest, juice, water, into a deep heavy bottomed saucepan and cook on a low heat until the ingredients have formed a loose but jammy consistency. Leave to cool.

To roll out the pie, grease the pie tin, then scatter, as if you were skimming pebbles across the water, flour on a clean surface. Preheat the oven to 230ºc (450f).
Unwrap the dough, leave for a few minutes to warm up slightly, then roll out the dough into a large circle which will cover the bottom and sides of your pie pan.
Carefully lift up the pastry with your rolling pin and drape it in the pie tin. Press it gently into the sides, then trim the overlap on top. Dock the bottom with a fork, making holes.
Bake the bottom blind by covering it with parchment paper and baking beans, for 15 minutes.
When you remove it from the oven,  and remove the paper and beans, dock the bottom again.
For the second pastry patty, roll it out, then I used a pastry rolling wheel with a crimped edge to make scalloped strips.
Fill the pie to the top with the cooled plum mixture.
Lay the crimped strips on top, weaving them in and out to make a latticed top. Brush the top with beaten egg, scatter with coarse brown sugar and a little sea salt.
Alderman suggest freezing the pie and baking it from frozen, I didn’t, I just baked it straight away for about 10 to 15 minutes.

Serve warm or cold, lovely with creme fraiche or icecream. 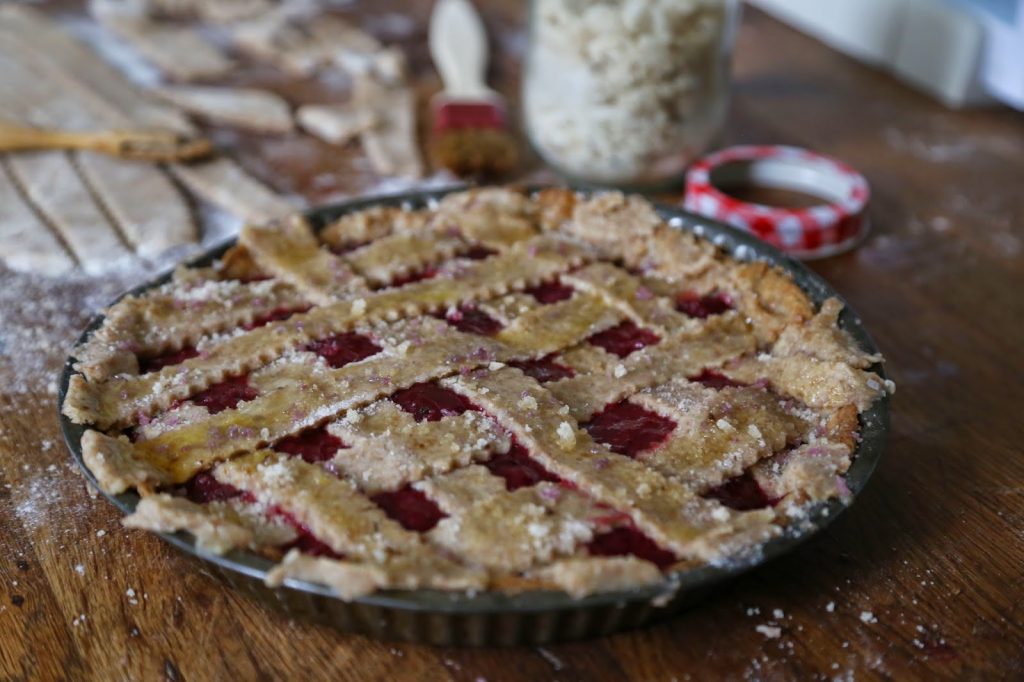 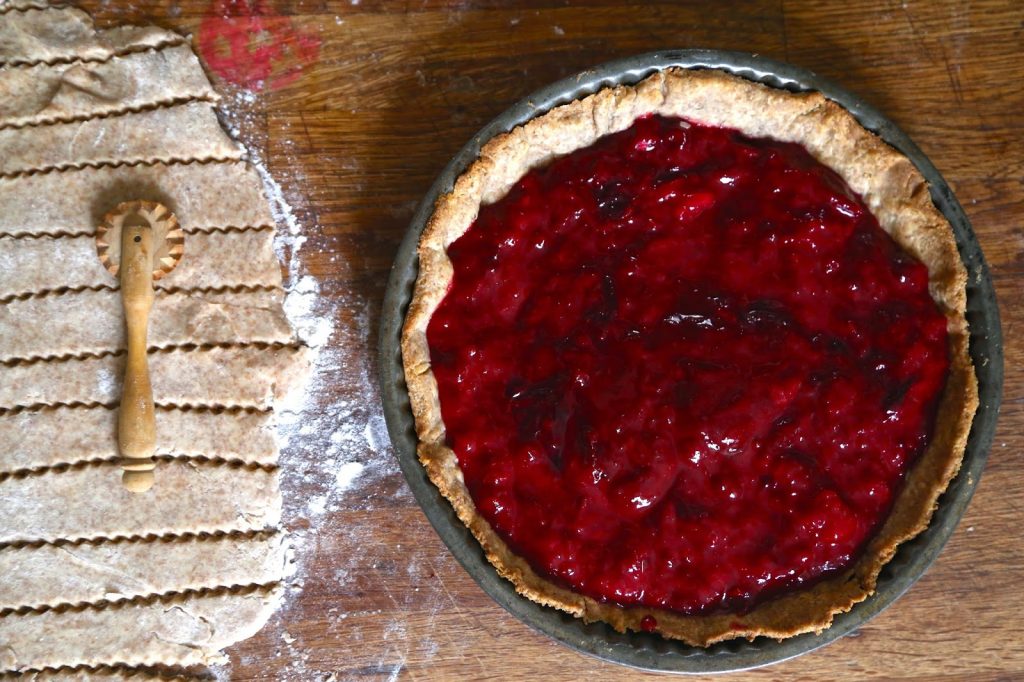 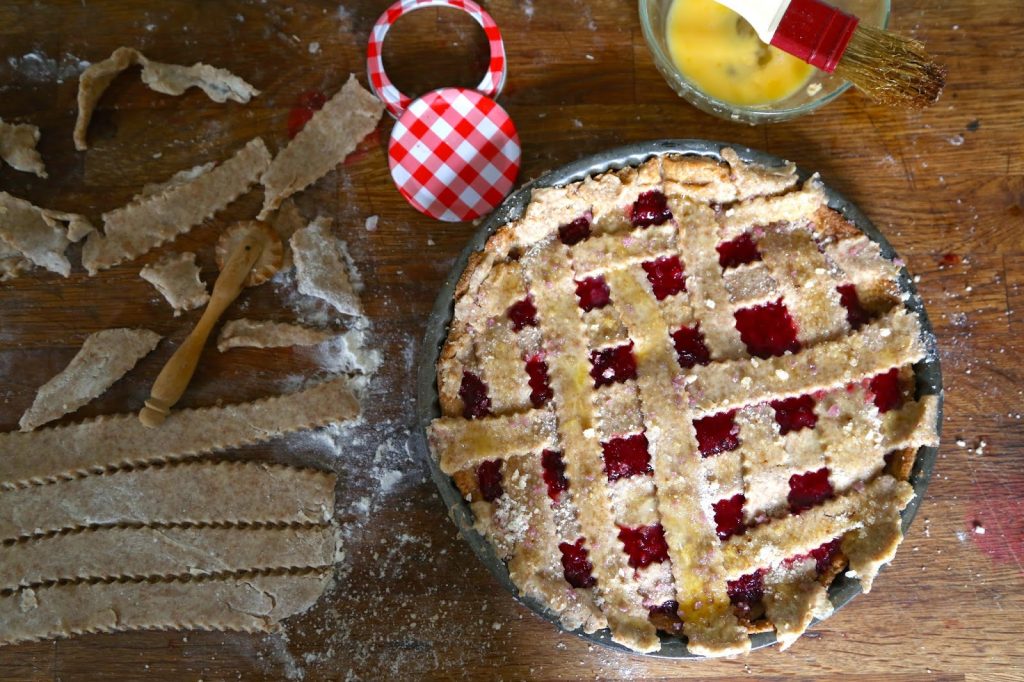