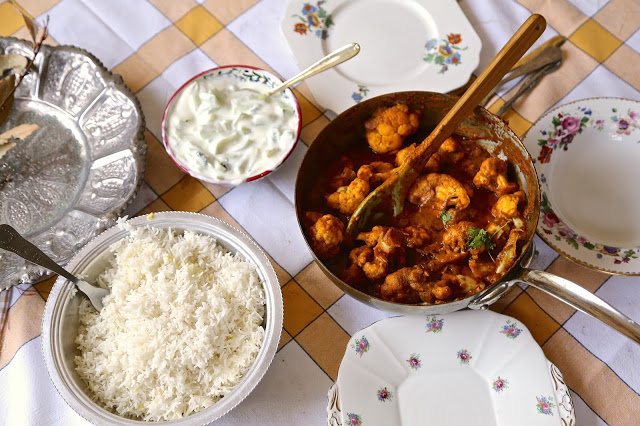 Cauliflower is very fashionable nowadays, in fact one amazon ‘reviewer’ of my book V is for Vegan said he judges all cookbooks by whether they had a cauliflower recipe in it! Apparently my book failed the cauliflower test. Oh well. If I’d known it was a criteria…
Some people don’t like cruciferous vegetables like cauliflower, so a curried cauliflower is a good option because it covers up the taste! I also tried out a couple of new products I’ve been sent a few months ago, HolyLama spice drops and Amira basmati rice. (This is not a sponsored post, I’m not being paid to write this. I feel I have to explain this as so many blogs carry sponsored posts nowadays and I don’t.)
This recipe is inspired by a cauliflower recipe in Camellia Panjabi’s 50 great curries of India. (Get it, it’s brilliant.)
She advises using authentic Indian Kashmiri chillies and while five may seem a lot, they are mild and merely give depth of flavour. I ordered mine from Amazon. 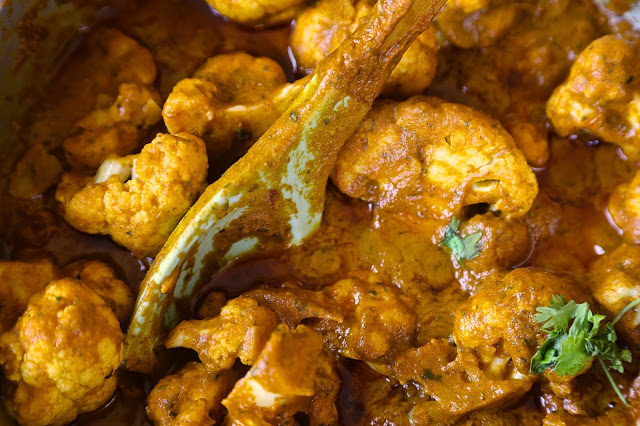 This recipe is a cinch if you have a powerful blender like a vitamix or a food processor to make the onion, tomato, coconut ‘gravy’.

Using a deep saute pan or frying pan, add the onions, fry in a little oil, until soft then put aside in a small bowl.
Do the same with the garlic and ginger, fry briefly, put aside in the same small bowl.
Boil a kettle and soften the creamed coconut in its plastic bag, in a heatproof jug full of boiled water.
Using the same frying pan, temper the chillies, mustard seeds, cumin, coriander, cinnamon, pepper, cloves, turmeric, paprika. Temper is the proper word for briefly frying or toasting these spices to bring out the flavour.
In your blender or food processor, put the onions, ginger, garlic, tomatoes, creamed coconut, chillies, spices and tamarind paste. Grind until smooth.
Put the paste back into the deep frying pan.
You can add the raw cauliflower florets if you don’t mind them a little crunchy in texture but you could also pop a colander over the boiling rice and slightly steam the cauliflower to soften it.
Then add the cauliflower and almonds to the spice/coconut paste and heat up gently. Add water or coconut milk if you want the sauce to be more liquid. Salt to taste.
Serve with white rice, and a yoghurt and cucumber raitha.
This curry like all curries, tastes even better the following day.

This stuff is well posh; lovely aromatic long basmati grains. All the top Indian restaurants, like Gymkhana, use Amira and you can buy it in most UK supermarkets. I’ve cooked it a couple of times before and it was either too hard or too soft. This time I succeeded but I used a rice steamer. You must soak it first for at least half an hour then rinse it a few times until the water is clear. I think the amount of water you use in the cooking is crucial, not too much or too little. Here is a link to a post on how to cook basmati. I really don’t know enough about basmati rice: I need to visit India to find out.
I used the saffron Holy Lama spice drops to flavour the cooked rice. The cheap way of making basmati look like pilao (pulao) is to add a pinch of yellow food colouring then fork it through. Or you can pound a few strands of real saffron in a mortar and add it that way. The spice drops worked well, adding flavour but not colour however.