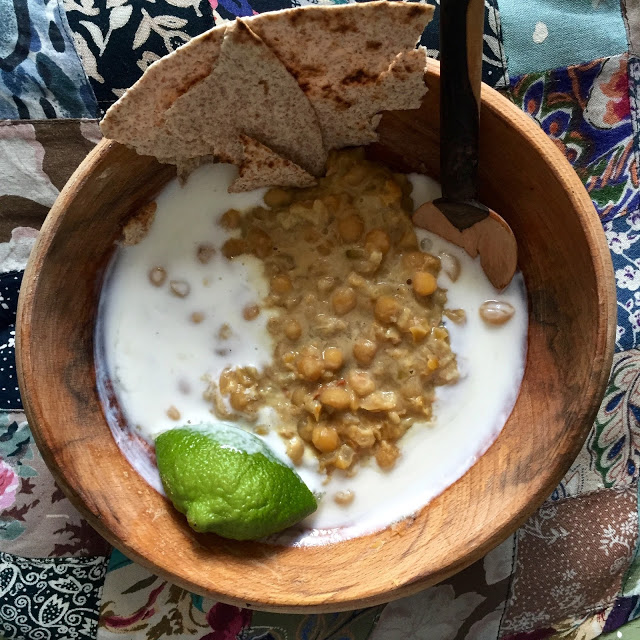 Serves two to four
250g Yellow whole peas, soaked overnight
1 tbsp sea salt
2 tbsps coconut oil
1 tbsp Mustard seeds
1 cinnamon stick
1 tsp cumin, ground
1 tsp coriander seeds, ground
5 cardomom seeds, ground
1 bay leaf
1 tsp turmeric or a small fresh turmeric root, grated
1 brown onion, diced
3-5 cloves of garlic, minced
a thumb of fresh ginger, grated
1 red or green chilli, thinly sliced
Handful fresh coriander leaves, to garnish
Drain the soaked yellow peas and put in a large casserole with a lid and cover with water. Simmer for 2 to 4 hours or until tender but not breaking up. As I’m going to use the cooking water for aquafaba, I’m not going to salt the beans until the very end, when drained.
As soon as the water is strained through a fine meshed sieve into a mixing bowl (keep this water), add the salt and stir it around the peas.
Take a deep frying pan, sauteuse or saucepan and put on a medium to low heat. Add the coconut butter, let it melt, then add the mustard seeds. Let them pop a little, then add the cinnamon, cumin, coriander seeds, bay leaf, turmeric. After a couple of minutes, add the onion, let it soften.
Then add the garlic, ginger, for a couple of minutes then add the cooked yellow peas. Cook for another ten or fifteen minutes then add the chilli and fresh coriander. 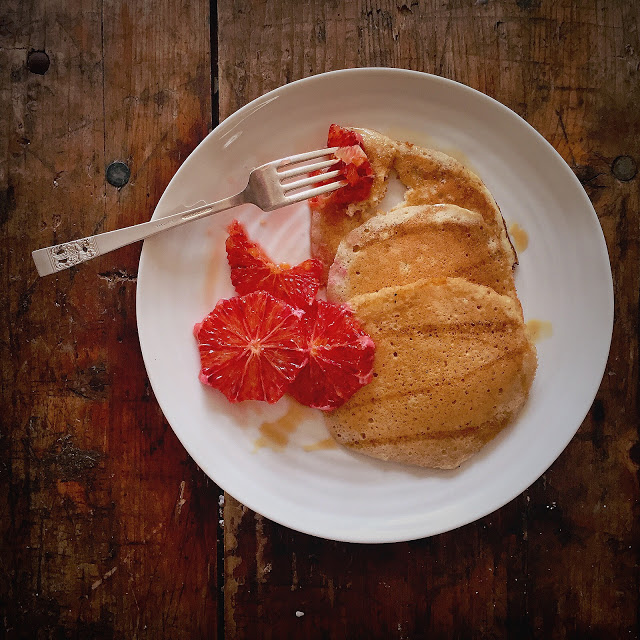 Makes 12 pancakes
10 tbsps of the liquid from the whole yellow pea cooking water
30g caster sugar
250g plain flour
a Pinch of Salt
200ml soy milk
1 tsp vanilla paste
2 tsps baking powder
2 tbsps coconut butter
2 Blood oranges, peeled, cut into thin slices
Light maple syrup to your liking
In a stand mixer add the pea cooking liquid, now cool and whisk on high until soft peaks start to form. I’ve found this happens very quickly when using the water from home cooked legumes rather than tinned.
Add the sugar and whisk into stiff peaks (more or less)
In a separate bowl add the flour, salt, baking powder.
Add 6 to 8 tablespoons of the aquafaba foam/liquid carefully to the flour mix.
Stir carefully.
Heat up a flat frying pan or crepiere with the coconut butter. You can wipe down excess oil with kitchen paper and use that to dab the pan in between each pancake. Put two generous tablespoons onto the hot pan, using the back of the spoon to make a circle with the batter.
I can do three at a time on my cast iron crepiere but do as many as you can comfortably fit in the pan.
Once the edges start to lift and darken, flip over the pancake.
When both sides are golden, remove from the pan to a plate, add some maple syrup and a few slices of blood orange.
Very light, very seasonal, vegan, with who knows how much protein from the aquafaba? 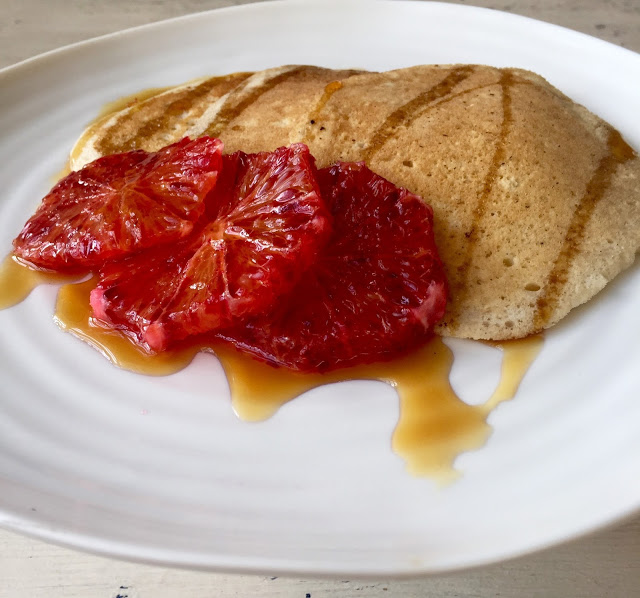