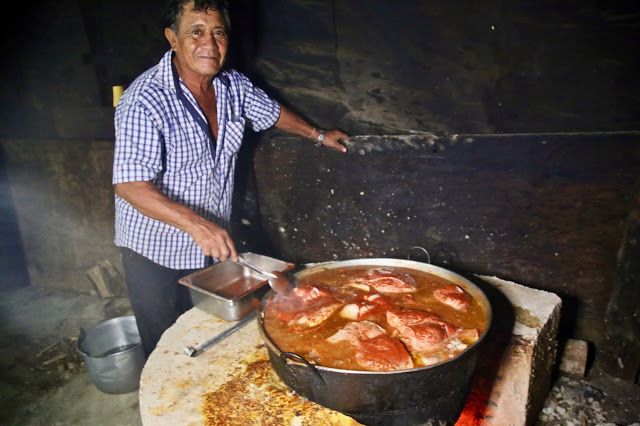 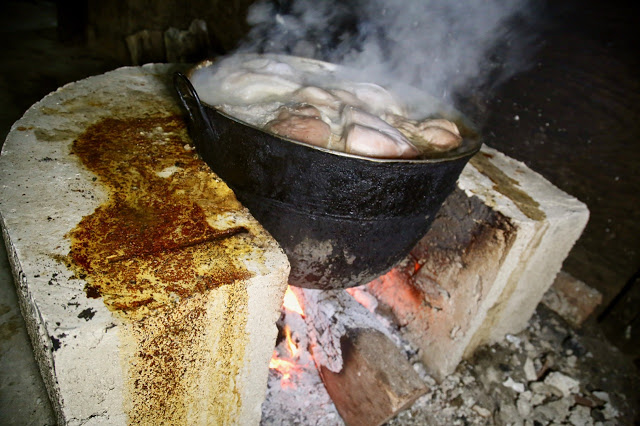 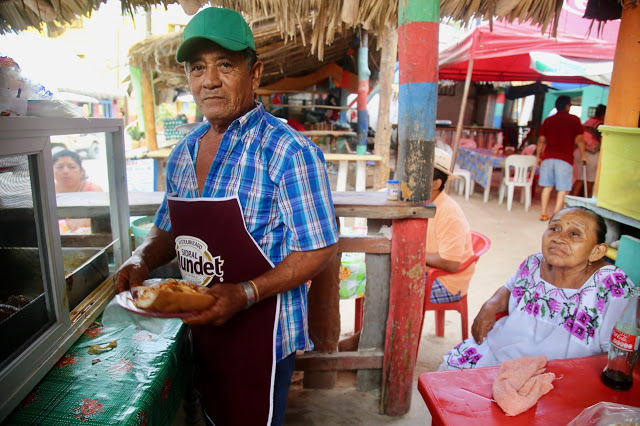 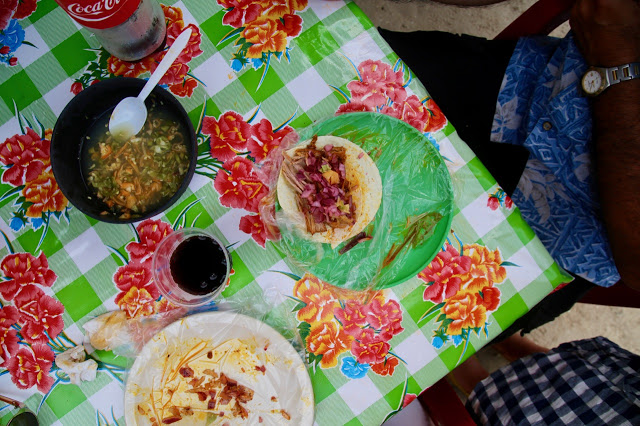 I asked again, this time at Holbox’s only gay bar. I’d wandered down the starless flooded back street, stepping over sleeping dogs like furry puddles, looking for this mythical house, the only house in Holbox, a tiny island a few miles from Cancun, that makes pibil. Pibil is a Mayan oven where food, usually pig, is cooked for hours on a low wood fire. It’s Saturday night, around 11pm.

I knocked on Julio’s door. No lights were on. Eventually a tiny woman in a cotton Mayan dress answers, blinking.

She nods. But doesn’t move.

Se puede verla? Quiero sacar fotos. (Can I see it? I want to take photos).

She shuts the door. I’m not sure what’s happening. Is that a no? I wait. Eventually a brown man with a kind face cracks open the door.

I do my spiel, adding that I’m here to cover the gastronomic festival in Holbox but also want to find out about traditional Mayan cooking techniques. Julio comes out, closing the door behind him, and leads me around the side of the house where a mutt is dozing, round to the back, which is black and moonless. I follow his sombre form through to an open-roofed area at the back of his yard. Julio whisks off a giant metal lid. Underneath a half-metre wide pot is bubbling with white pork fat over a concrete semi-circular oven. I move around to see the fire. Julio kicks a log further into the flames.

He then shows me a tray of rich ochre liquid.

I’m holding my camera and a light, I have no hands free. He sticks his finger into the dripping liquid and feeds it to me, placing his stubby finger directly in my mouth. This is discomfitingly intimate but I don’t want to be rude by flinching. I nod enthusiastically:

This is a mixture of achiote, bitter orange juice, onions, salt and spices. Julio pours the tray into the cauldron, stirring and smiling.

The tiny woman is his wife Alejandra, who is no more than 4′ 5″. All the Mayans are tiny. I’m all for small podgy people. They are my tribe. Us shorties need to stick together. Mexican hobbits.

I let them go back to bed. Cochinita in a pibil oven is a once-a-week treat on Sundays. In the morning I see them at the market with their daughter. They promise to make me a vegetarian pibil next time.

I came across another pibil stall, but they’d made it in Cancún and transported it here to Holbox island. There was a queue. My favourite thing is the big buckets of pink pickled onions that garnish every dish, plus the habanero tamulado sauce.

There was only one problem with this pibil: it didn’t take place in an underground oven. Which means it isn’t totally authentic. I get my chance later, when staying on the mainland, in Coba, a jungle town around a lake. 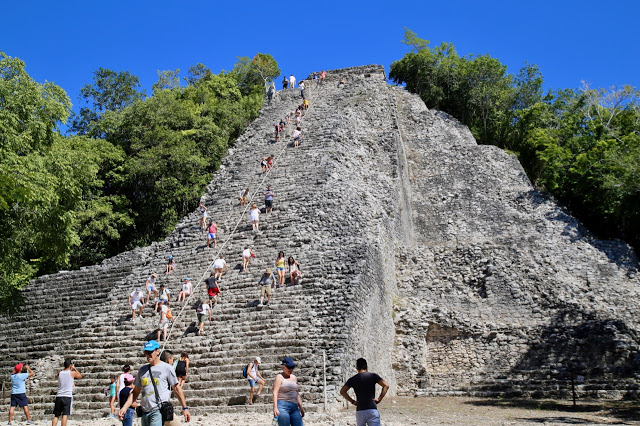 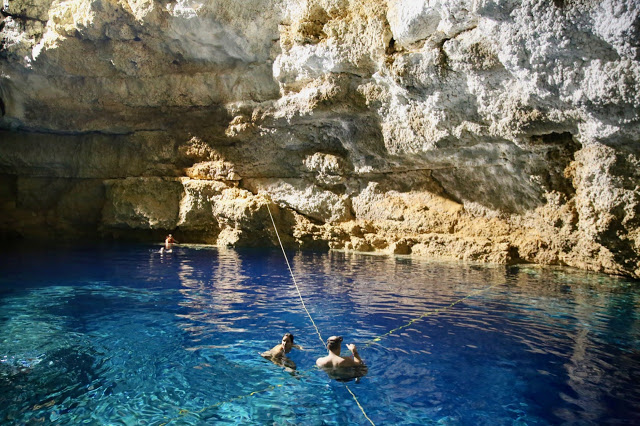 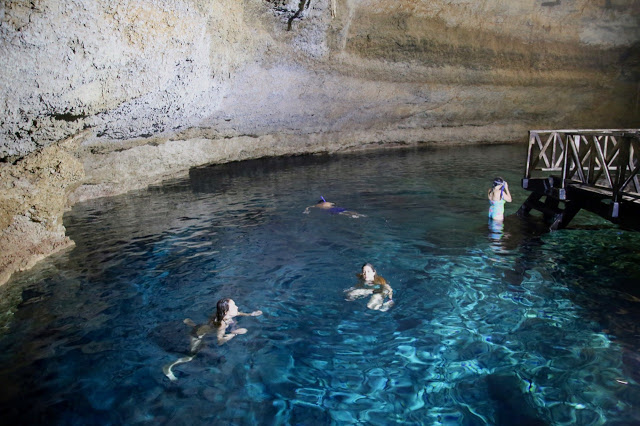 Coba is famous for Mayan ruins, pyramids that are sickeningly steep to ascend and cenotes, fresh water pools, many underground. I cycle nine kilometres to the most dramatic cenote, a vast turquoise cavern accessible via a slippery wooden circular stairway several floors down.

On the way I see fires deep in the jungle. Pausing, I wonder if they are making a pibil. It was a bank holiday, the sort of day where a family would prepare a feast.

On my return I park my bike by the side of the road and walk through the trees, broken up by slanting green shafts of sunlight. Smoking piles of leaves are everywhere. I call out. 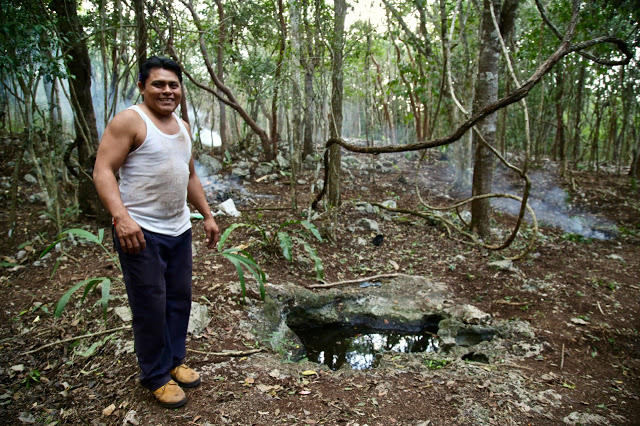 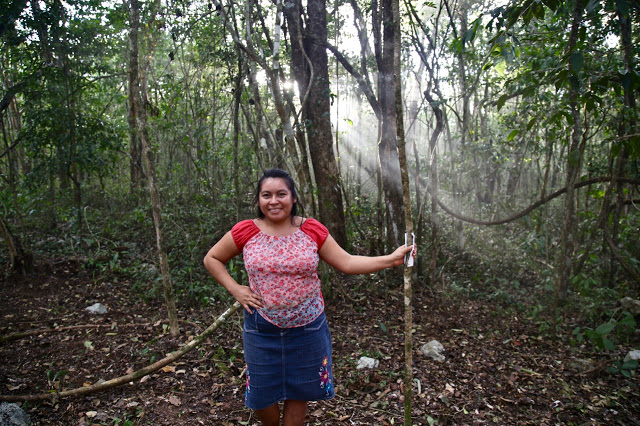 A short handsome man in his early 30s walks towards me. He’s happy to show me around, explaining:

We are a group of six families setting up a typical Mayan village here in the jungle. We want to explain our culture to tourists, so you are our first tourist.

He points to a heap of leaves, fumes curling out.

We are cooking pumpkin here, pibil-style. It should be ready now.

With a friend they shovel off the dirt, then the hot stones and burning embers, finally tearing off the banana leaves and revealing around 25 whole pumpkins of different sizes. 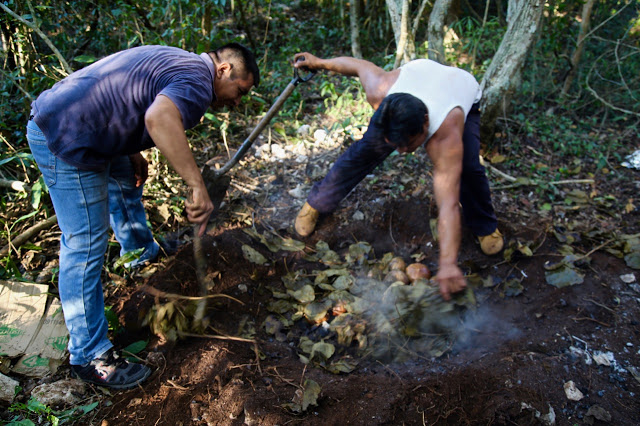 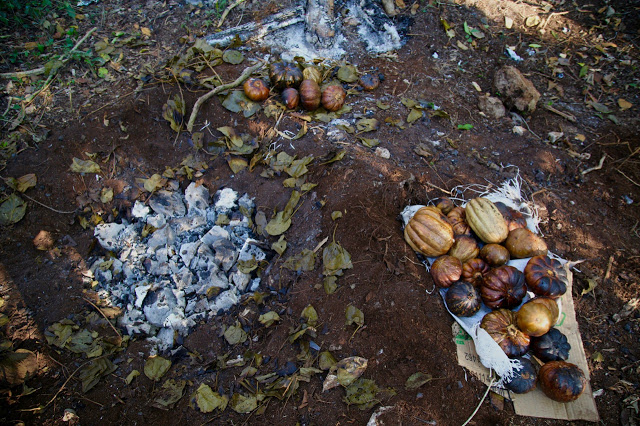 How long did it take to cook?

Which seems remarkably precise. Are all of these smoking mounds pibil ovens? I ask, waving my hand.

Many of them, but some are just smoke to keep the mosquitos away.
Cooking pumpkins in this way means the flesh is sweet and dense. We serve them with honey and a pumpkin seed sauce. 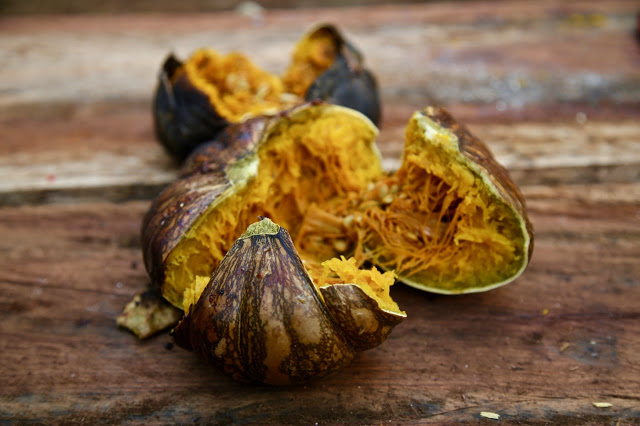 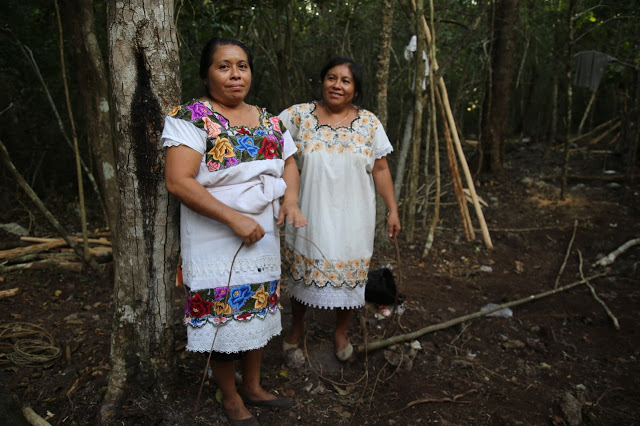 We walk further into the forest, where men and women are building a hut: making a thatched roof from palm leaves tied together with jungle ropes. Everyone speaks Mayan – Spanish is a second language. I use my one Mayan phrase: Iin kaabai Christina. I am called Kerstin.

Building a house takes a month. We cut the trees during the new moon, otherwise the insects eat it and turn it into dust. 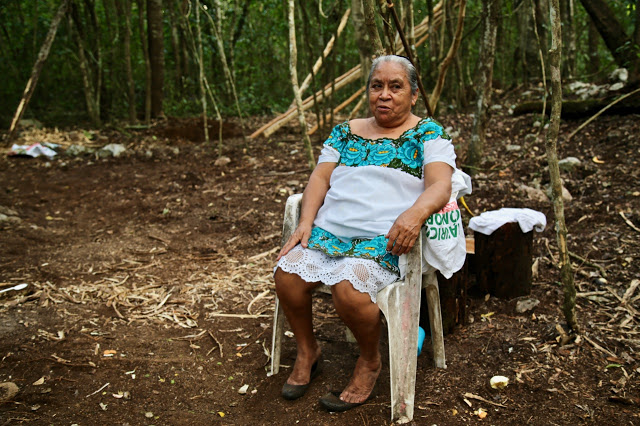 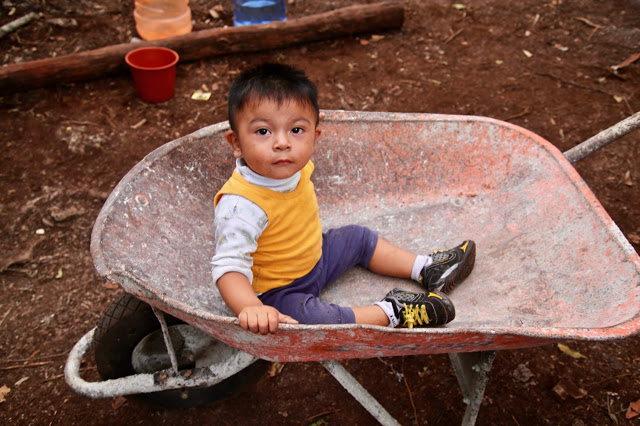 His grandparents rested on hammocks while children ran around. The entire family is there.

We are also building a well, so we are completely self-sufficient here. Dig down 17 metres anywhere in the jungle and there is water. We have 5 metres more to dig. Do you know this tree?

He points to a tree with black resin on the bark.

This tree ‘Chechem’ burns you but we use it as medicine.

In English it is known as Poisonwood. The tar will burn your skin. He then points to another tree:

These are jungle bees, they are very rare now. They are so vulnerable; they don’t even have stingers.

We watch the bees cluster around a kind of bark pipe sticking out of a tree.

The honey is in the tree. If the bees are attacked they close up the opening, as that’s their only defence. 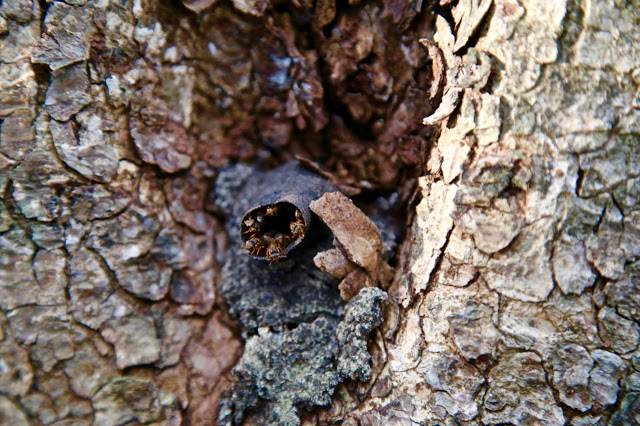 He gives me a blistered pumpkin to take back to my hotel for dinner. I’m staying at the Coqui Coqui Coba residence hotel, which only has two rooms. Each of them are in different wings, that is two pyramids joined by a rope bridge. It’s a long climb up. The hotel seems ancient but it’s fairly new.

Every aspect of it is beautifully designed: from the stone bath tub to the handmade toothpaste, shampoo, conditioner, insect repellent and eau de toilette. This place was started by perfumer Nicolas Malleville and his wife, an interior designer. There is a perfumerie where scents made from local ingredients are captured under tall glass domes: vanilla, orchid, jungle honey, Mexican roses from Valladolid, sandalwood, tabacco, agave, orange blossom.

I gave the calabaza to the chef, who gave me half and the rest was shared by the hotel staff. I have dinner on my own at a white linen clothed table, at the top of my pyramid room, on the terrace. I ate it as I watched the sunset, the bats flying from the tree, the crocodiles slinking around the lagoon, the crickets rubbing their legs. The steaming pumpkin, served on a platter covered by a silver dome, was sweet and smokey. The rare honey wasn’t thick like normal honey, but almost watery and savoury, sweet with lemony notes. 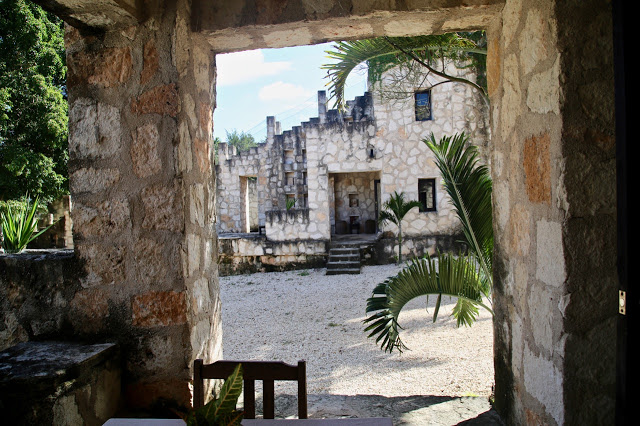 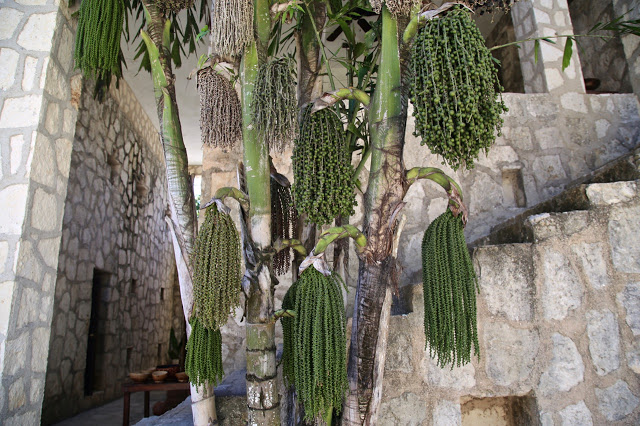 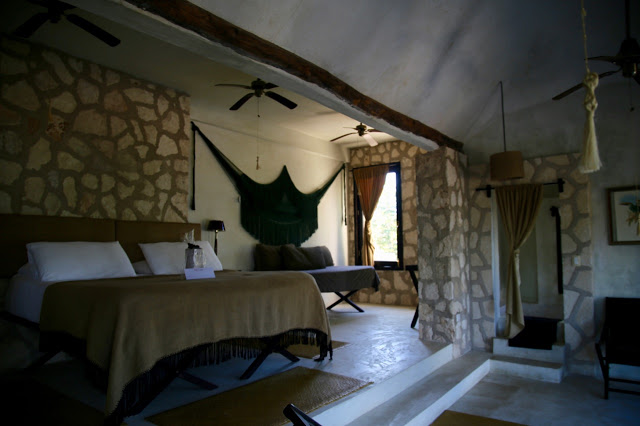 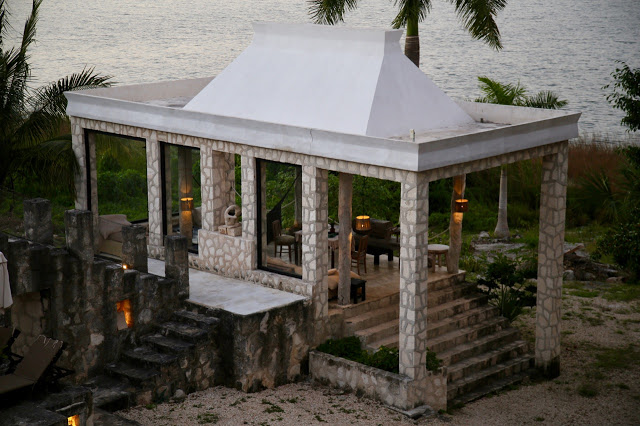 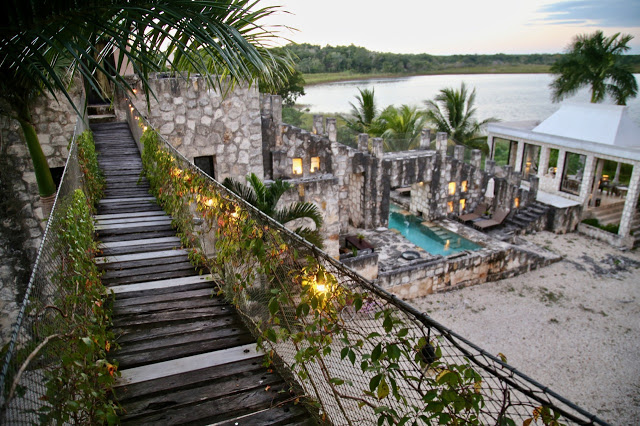 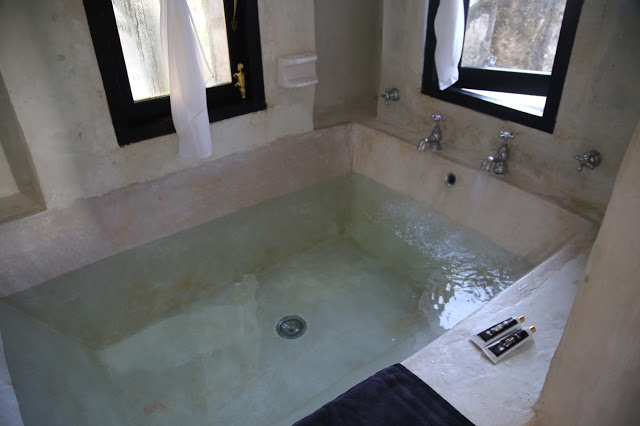 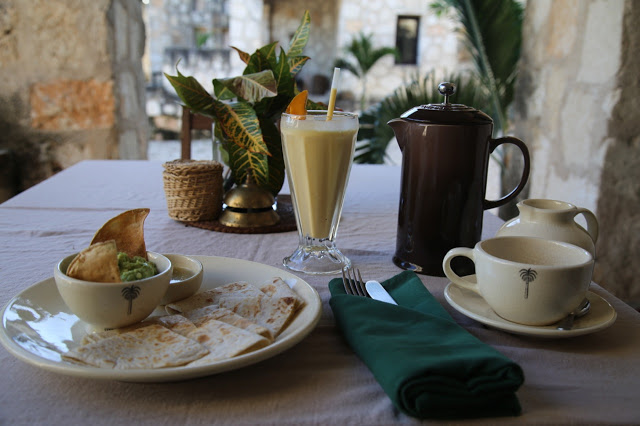 Previous Post: « 10 things to eat, see and do in Holbox, Mexico
Next Post: What does Vogue eat? »