My supper club last weekend was inspired by my trip to Canada last year, where I discovered the Canadian spring tradition of a sugar shack meal.

After a lengthy -50°C winter, come February and March, families leave town to visit their local maple farmer and taste the new season maple syrup. Farmers are ‘sugaring off’ their syrup, slowly reducing the watery maple sap over a wood fire to a shimmering mahogany nectar.

Wooden shacks next to the vats frequently boast long checkered-cloth covered refectory tables, adorned with jugs of that years’ vintage of maple syrup – to be tipped liberally and frankly rather oddly into dishes such as pea soup or on fried potatoes.  The farmer’s wife will cook a generous spread of traditional Canadian winter food, not fine cuisine by any means, but hearty and comforting. I tried to recreate this meal. 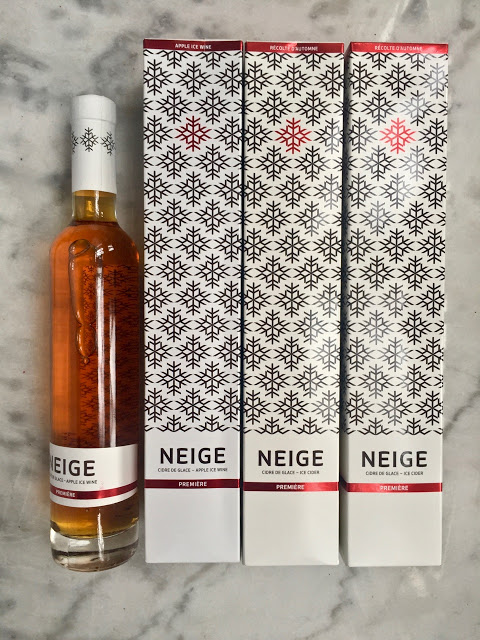 Ice cider from Domaine Neige
Garden pea soup with bagel chips
Plum and maple syrup cured home-smoked salmon
Poutine with mushroom and truffle oil gravy and squeaky cheese from Goulds Cheddar
Slow cooked maple beans from Hodmedods
Walnut Romaine lettuce with maple syrup dressing
Pouding chômeur
Nanaimo bars using Moose Maple butter
Maple taffy on snow
Jugs of maple syrup from Clarks (No 1 Medium) and Pure Maple (Grade A Robust)
Playlist: Justin Bieber, Celine Dion, Michel Bublé, Alanis Morrisette, traditional Quebecois jigs
Around a quarter of my guests were Canadian. I had driven to Glastonbury, to Goulds cheddar at Batch Farm, the day before, to obtain authentically squeaky (as you bite down they squeak against your teeth) cheese curds for the poutine. (More on this in a later blog post.)
I used different grades of maple syrup in different dishes; for instance a lighter maple syrup in the pea soup and darker more robust syrup in the beans. Here is an explanation of the different grades. Maple syrup in a vinaigrette salad dressing adds a subtle and savoury sweet note to salads, especially when combined with walnuts or pecans. I used maple peas from British bean grower Hodmedods and cooked them in the bottom oven of the Aga for around three days!
The most exciting moment when when we obtained snow from freezer scrapings (not easy to find real snow in London) and I made maple taffy lollipops on snow at the table. 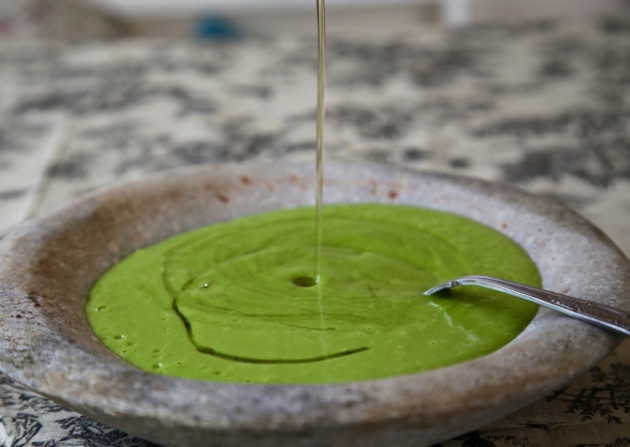 Serves 6
3tbsp olive oil
4 shallots, minced
2 cloves garlic, minced
Bay leaf
1 kilo bag of frozen garden or petit pois peas
300ml full fat creme fraiche
500ml vegetable stock
1tsp sea salt
A few grinds of white pepper
150g shelled edamame beans
Pea shoots (optional)
In a large saucepan on a medium heat, soften the shallots and garlic with the bay leaf. When lightly golden, add the frozen peas and stir for a few minutes. Then add the cream, stir for five minutes, season to taste and add the vegetable stock. Add half the bag of edamame beans and simmer for half an hour. Put the liquid through a blender or use a stick blender. Check for seasoning. Use the rest of the edamame beans for garnish or pea shoots if in season.

I used this in a walnut salad with sweet crisp Romaine (cos) lettuce. You can also use pecans.
75ml olive oil
1 heaped tbsp dijon mustard
Juice half a lemon
1tbsp maple syrup
1tsp sea salt
Put all the ingredients, in the above order, into a jam jar and shake. 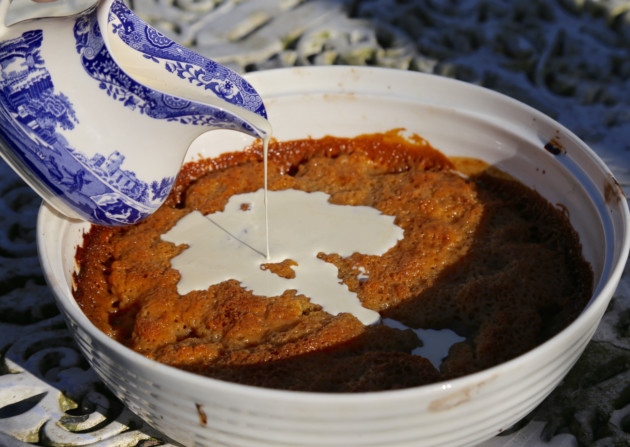 The name of this dessert means pudding for a man on the dole, derived from the fact that the ingredients were cheap. (Previously, maple syrup was a fraction of the price of cane sugar in Canada.)

It’s very easy to make, a little like a sticky toffee pudding. Perfect for chilly nights.

Make the sauce by putting all the ingredients into a medium saucepan and bringing to the boil, then removing it from the heat.
Preheat the oven to 180ºC.
For the pudding, beat the sugar and butter together until fluffy, then add the egg and vanilla until combined.
Gradually add the flour, baking powder and salt, stirring until well mixed.
Pour half the sauce into a baking dish (approximately 22cm square) then spread the pudding mixture on top. Add the rest of the sauce.
Bake in the oven for 25 minutes or until golden.
Serve with double cream mixed with maple syrup.

This recipe has been one of the most quickly devoured things I have made in a long time. It is adapted from Joy of Baking’s recipe. I prefer them without the desiccated coconut. I also used a new ingredient by a start up food company in London, Moose Maple butter, a combination of British slightly salted butter and Canadian maple syrup. The bars are a kind of fridge cake, made in three layers.
Makes 20 to 25

Butter or spray a 20 x 20cm (8 x 8 inches) square tin or a brownie tin.
Bottom Layer: In a saucepan over low heat, melt the butter. Remove from heat and stir in the sugar and cocoa powder and then gradually whisk in the beaten egg. Return the saucepan to low heat and cook, stirring constantly, until the mixture thickens (1 – 2 minutes). Remove from heat and stir in the vanilla extract, digestives and chopped nuts. Press the mixture evenly onto the bottom of the prepared pan. Put in the fridge to firm up.
Middle Layer: Beat the butter until fluffy. Add the remaining ingredients and beat until the mixture is smooth. Spread the filling over the bottom layer and put in the fridge for half an hour.
Top Layer: Chop up the chocolate and microwave for 30 seconds. Stir then if still not sufficiently melted, microwave for another 30 seconds. Add the butter and stir. (Or you can use the bain marie method, of a bowl over a pan of hot water). Pour the melted chocolate evenly over the nanaimo bars, spreading with a rubber spatula into the corners, smoothing the top. Scatter the pecans on top. Put it in the fridge to set.

If wanted chop up the white chocolate and microwave for thirty seconds. Drizzle, with a spoon, over the nanaimo bars. Return to the fridge until set.
Cut into squares with a sharp knife. 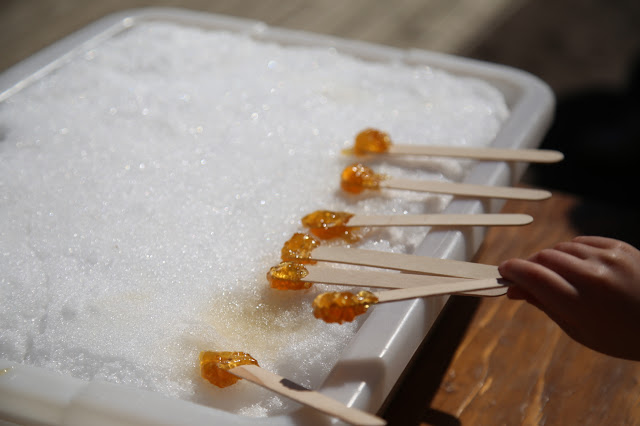 Readers may remember the story from Little House on the Prairie where they make maple taffy on snow. This is a traditional finale to each sugar shack meal, a spring treat enjoyed just as much by adults as by children.
Ingredients:Maple syrupClean SnowFlat lollypop sticksShallow baking tin or containerDigital thermometerJug
Boil maple syrup to 115ºC or 235ºF. It’s best to use a digital or sugar thermometer.Pack clean snow into a shallow container so that it is compacted and flat on top.With a jug, drip the maple syrup onto the snow in thick strips (an inch or 2-3cm wide and 6 inches/ 12cm long).

Using a flat lollipop stick, press it down into the liquid maple syrup until it starts to stick, then slowly roll up into a popsicle. Hold the stick sideways as you are eating it, otherwise it’ll drip down into your sleeves.