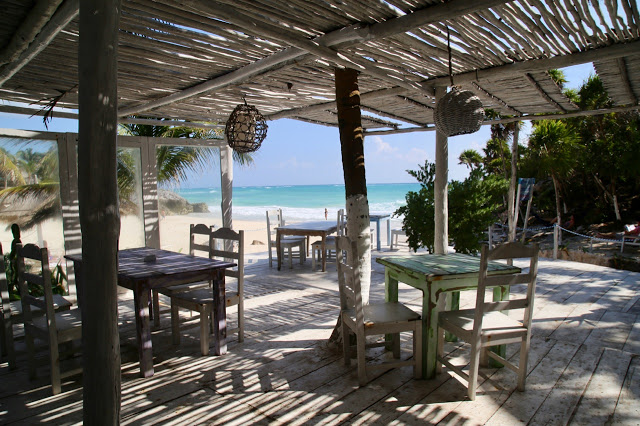 There was a part of me that, despite its blinding beauty, hated Tulum. Everybody there was ridiculously gorgeous, slim, honey-skinned, young, lithe… and rich. Especially rich.

Who are these millennials who can afford $250 a night accommodation? Who ARE they? How did they get to this place in their lives? I don’t get it. 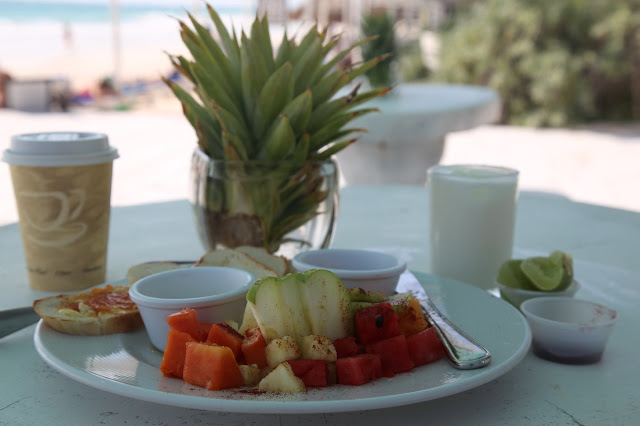 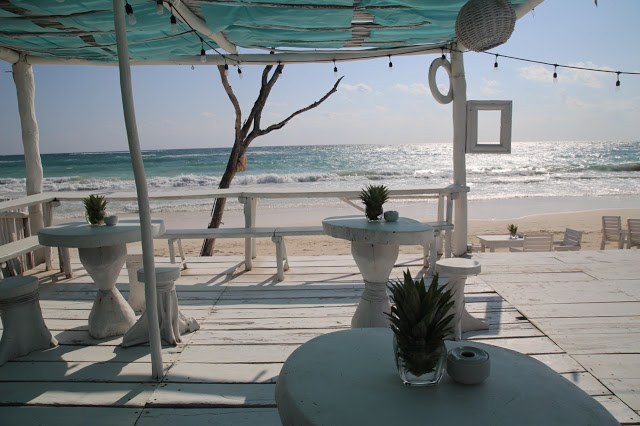 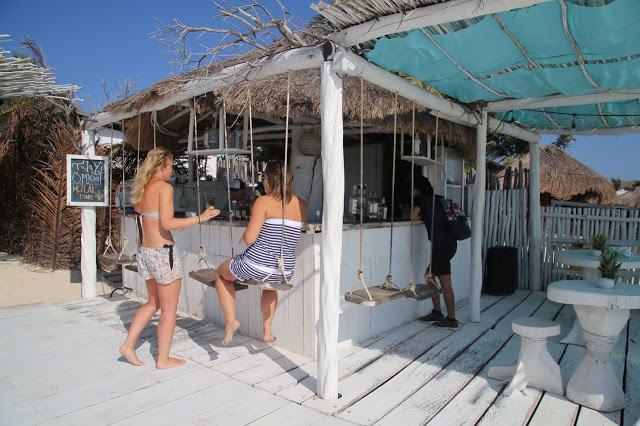 I stayed at Coco Tulum, a stylish beachfront hotel on the white sand, the most bleached beach I’ve ever seen. The bar was white, the driftwood furnishings were painted white, the mosquito nets were white, the taps were hidden in enormous pink shells, the drinks were fluo, the bodies were brown, the sky was a totalitarian turquoise. 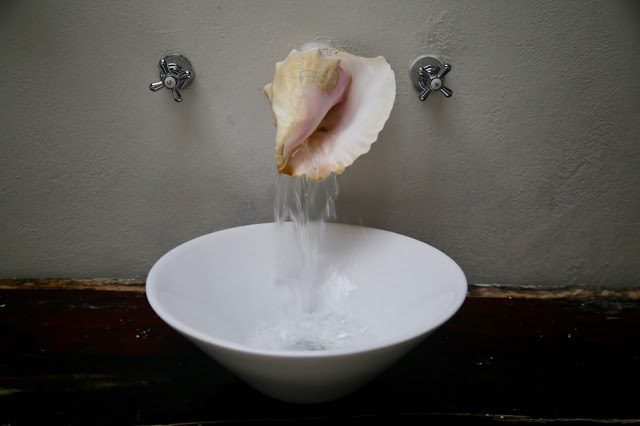 This place didn’t have rooms but individual huts. I begged for a press discount. For $100 a night I got the worst hut, near the road and the restaurant, far from the loo, without a view. So I felt like the poor relation. The huts near to the beach were beautiful but around 350 bucks a night.

Tulum used to be the hippy cheap part of the Yucatan coast. Gradually it became chicer, more expensive, more mainsteam touristy. The restaurant ‘Hartwood’ was part of this developing trend. 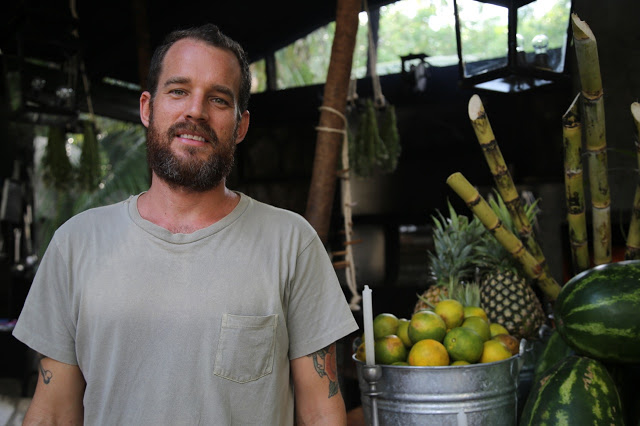 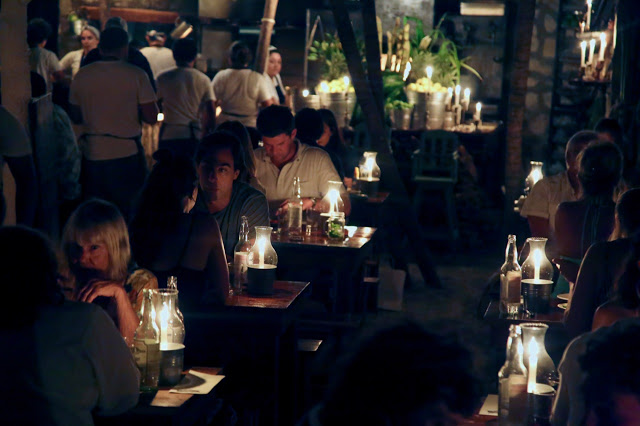 To read ‘Hartwood’ the book, and virtually every piece written on it, you’d think the restaurant was in the middle of the jungle, far from civilisation. In reality it faces the main drag, which stretches from the town via the ‘hotel zone’ all along the coast. Every evening there is a traffic jam outside, bringing well-heeled tourists to the restaurant. Wild it isn’t.

While Hartwood has been lauded by chef Rene Redzepi as ‘the place I dream about’ on the cover of the eponymous cookbook and described as ‘unforgettable’ by the Guardian, it’s certainly not the only (or even the best) restaurant in the region. It doesn’t do to focus on this trendy eatery run by two New Yorkers (sickeningly described by Condé Nast Traveller as ‘sun-kissed and loose’) and neglect the fantastically vibrant neighbouring food businesses run by locals, where you find truly authentic fare. Beautiful food by beautiful people? Nah. Give me a squat Mayan grandma any day. She knows what’s up.

I booked for the restaurant at 8pm on a Friday night. Earlier that day I walked there to check out its whereabouts and hopefully take a few pictures before nightfall. The executive chef Eric Werner was there in a business meeting. I pleaded with staff for a meeting with him to take pictures, ‘I’ve come all the way from London’ and ask a couple of questions. Chef Werner is a big shot nowadays – ‘Vice have just been and done a thing on me’ – but he kindly gave me a few minutes of his time. 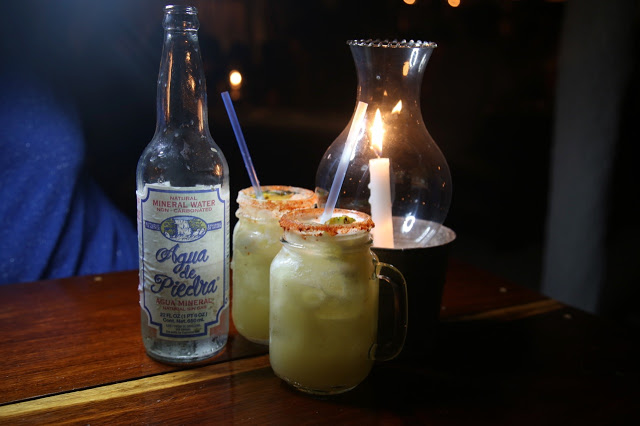 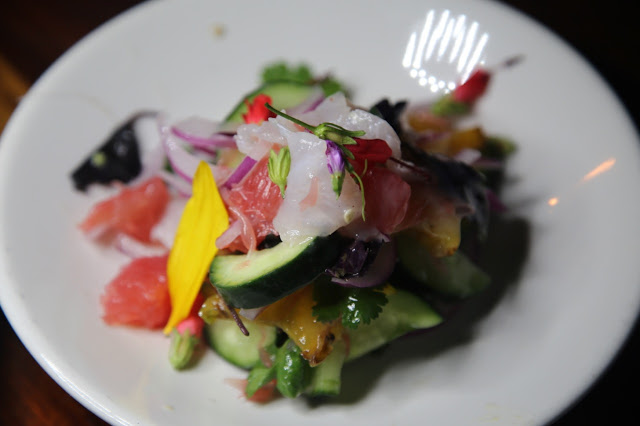 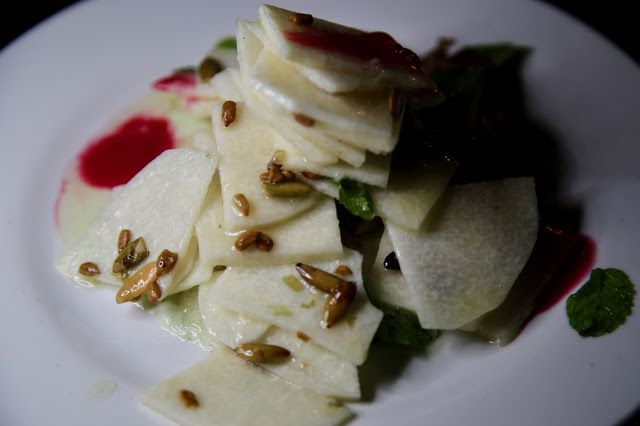 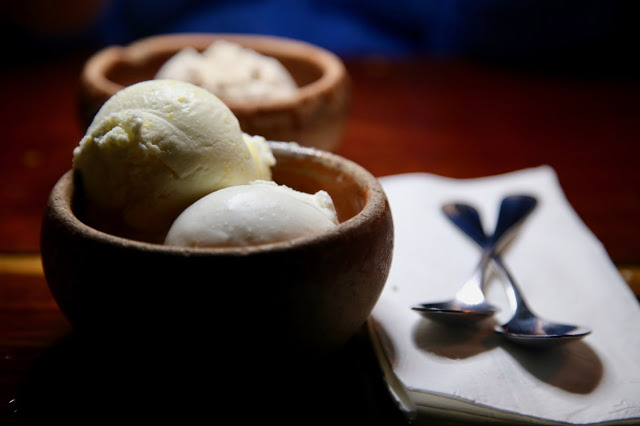 The low note were the cocktails. Despite sending them back once, the tamarind margarita was unprepossessing and, even though we didn’t drink them, they charged us. A high note was the corn flavoured ice cream. I felt rather sorry for a group of girls who’d booked months ago but were still waiting for a table 90 minutes later. The executive chef might be American, but the time-keeping was strictly Mexican. 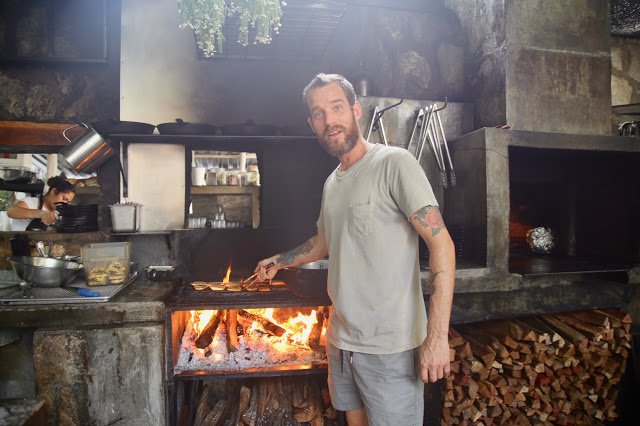 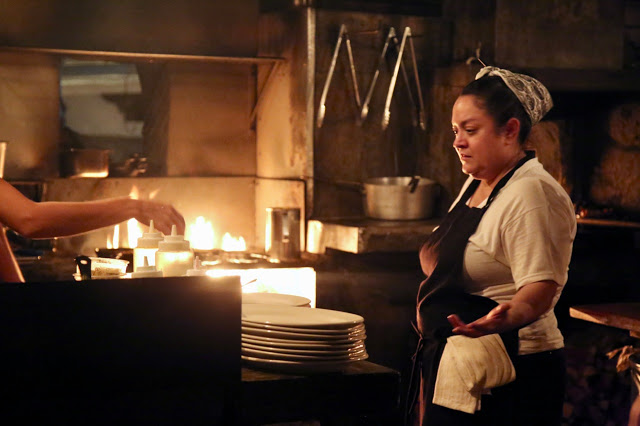 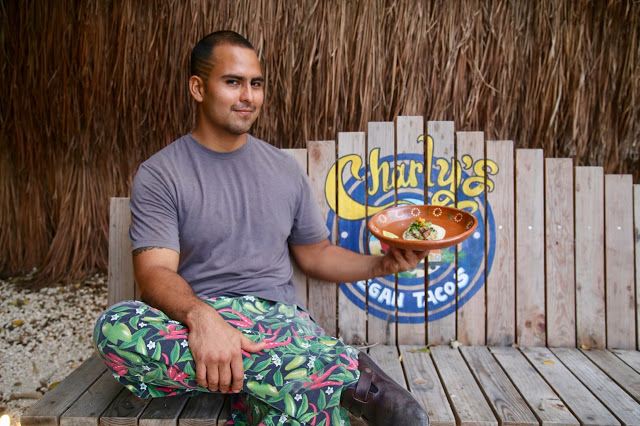 Charly’s a chef, not a vegan, but he and his business partner have started a really good casual dining restaurant at the beginning of the hotel zone on Carreterra Tulum. There are a huge selection of pickles and salsas to jazz up your chosen vegan tacos. Prices are reasonable. 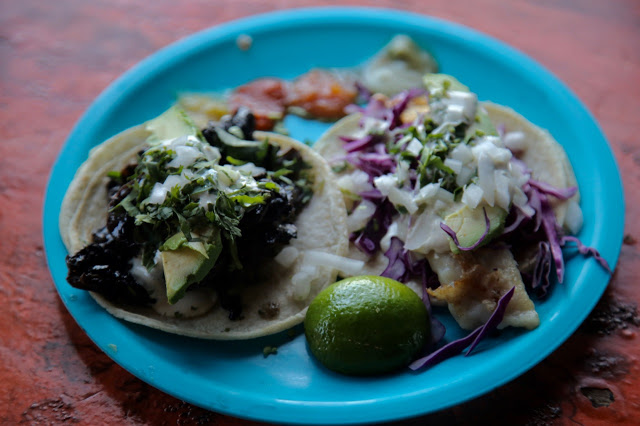 My favourite place to eat was Taqueria La Eufemia, at the end of the beach past Hartwood, where I waited all afternoon until my dinner appointment. I mentioned to locals that I was going to Hartwood and they shrugged.

We can’t afford it said one hotel worker.

The chef is connected said a barman.

Yeah I think his amigo is from the New York Times.

He’s got good marketing said another.

La Eufemia, on the other hand is friendly, cheap as chips, with a satisfyingly long counter of choose-yer-own-rainbow-shade of salsa, stoned customers, beach bums, hippies, backpackers, sun-grizzled old gals holding up the bar. There are a few smug skinny minnie yoga bunnies draped over the sun beds but nothing overwhelming. It’s actually on the beach. This is where the locals go. They can afford it. So could I.
Next door to this is probably the cheapest place to stay in Tulum, the campsite. I didn’t check it out though. 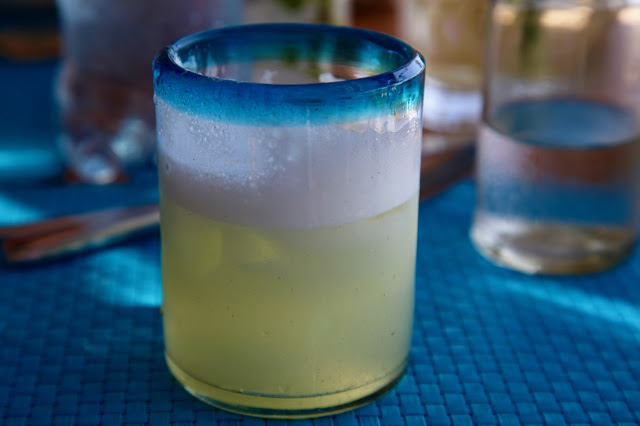 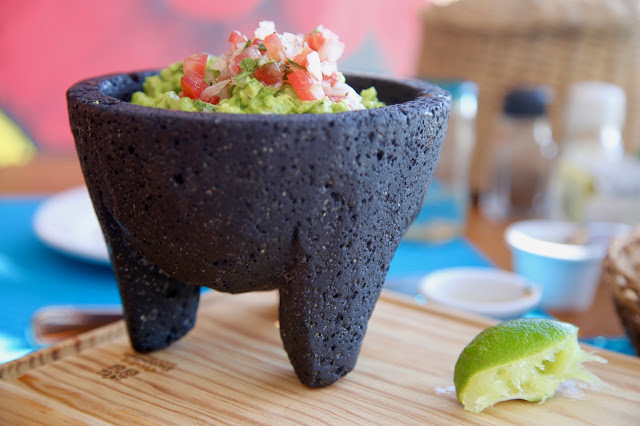 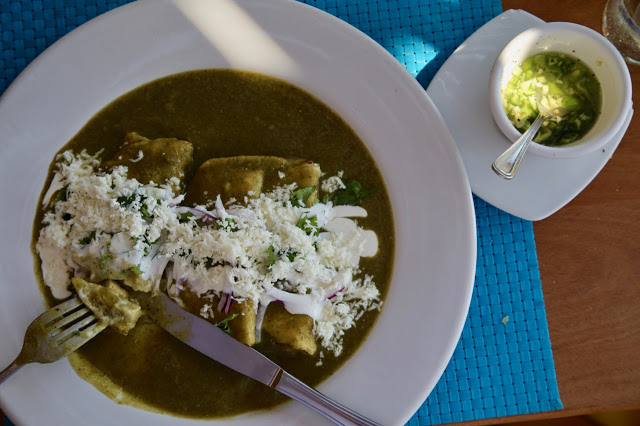 There are dozens of good restaurants and hotels along the Caratera Tulum strip. At this one, Piedra Escondida, the food was tasty, there was a private beach and the drinks pitched just at the right strength between pissed and sun-kissed and the waiters helpful(and willing to charge up my iPhone.) Again it’s not cheap to stay, around $250 a night.