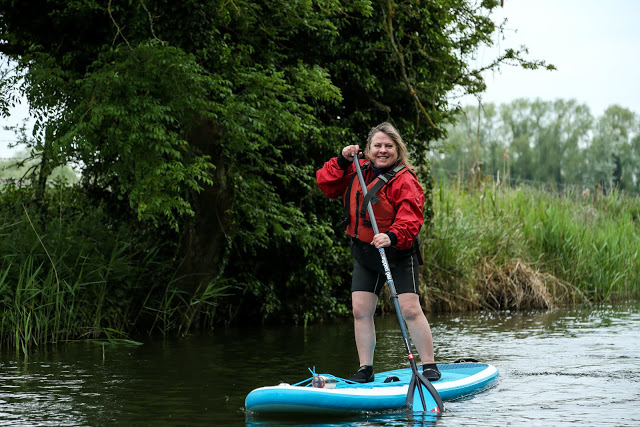 Just to let you know that I’m changing this food and travel blog into a sports blog.

Just kidding. But, despite my widening girth (not helped by years of close-contact immersive food reportage), I do like to be active and adventurous, especially anything to do with water sports (no sniggering). So while I wasn’t quite sure what paddleboarding was, I leapt at the opportunity to try it.

Paddleboarding is also known as SUP, an acronym for Stand Up Paddleboard. A paddleboard is like a surfboard, but thicker, sturdier and inflatable. It’s easier to stand on than a surfboard and you row with a paddle. I have tried surfing, and it’s very difficult if you aren’t under 20 and super-fit when you start. Paddleboarding is a great deal easier, therefore accessible to older, less fit people.

The Red Paddle Co, who invited me on the trip, are the market leaders of this sport in the UK, which was originally developed in Australia. 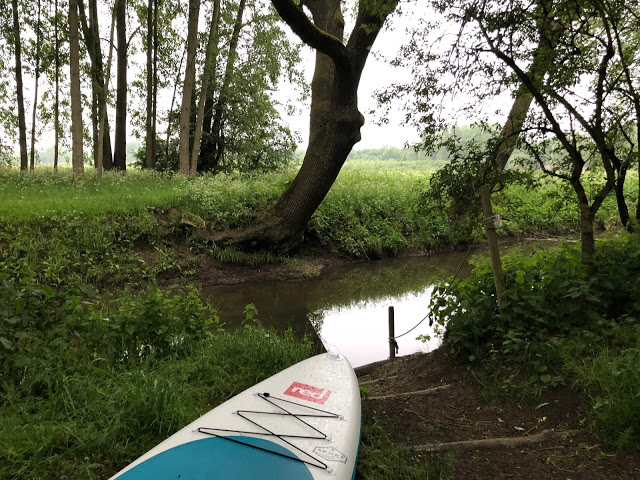 In the morning I dug out my shortie wetsuit and just managed to wriggle my body inside, looking like an over-inflated lorry tyre about to pop. That afternoon, we took the train to Bedford, about an hour north of London. The idea is that you don’t need to go far to have an adventure and paddleboarding is something you can do after a day at work. It can be done on rivers, canals, lakes or the sea ( at sea you would have a lead attached to the board). 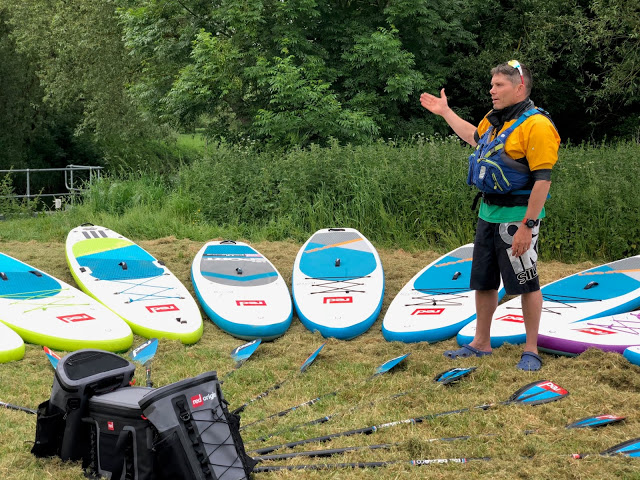 The Canoe Trail Company drove myself and the other sports bloggers (I was double their age) to the River Ouse. The paddleboard, when deflated, folds into a wheelie bag, so this equipment is easy to transport.

The first thing they did was pump up the boards. The longer and slimmer the board, the faster it goes.

‘Can I have a short wide one, please?’ I immediately asked.

Out of seven journalists, three of us were girls.

‘Have you ever done it before?’ I asked one.
The other woman said: ‘I’ve done it a little bit.’

Later I discovered she actually had one at home. She was in front the whole way and ended the journey bone-dry.

My paddleboard (a 10/8, whatever that means) was white and blue and had three little red fins underneath. I dragged carried it to the river. (Pause here to say, wow, the countryside is actually quite near to London.) Someone held it steady in the water while I gingerly clambered onto the middle section of the board, on my knees.

I saw the others had stood up. I was so stiff in my wet suit, I couldn’t bend. I paddled over to the wooden pier to hold onto it while I tried to stand. I planted my feet wide either side of the central strap. As I was accomplishing this feat, I heard the boss man from the Canoe Trail Co laugh:

I managed to stand. Underestimate me at your peril. We started to paddleboard up the Ouse. We were going to be travelling 4 1/2 miles to a camp, staying overnight and getting the train back to London by 10am next morning. A micro adventure.

At first it was fine, but my feet started to hurt and cramp. My years of Iyengar yoga obviously need a tune up. The wind blew up and it looked stormy. I was lagging behind the others. Finally a gust of wind blew me backwards off the board. I fell in. The water was warm – warmer than outside of the water anyhow.

I tried to get back on my board in the middle of the river, which wasn’t easy. Arran, a kind young man, helped me up.

‘Look,’ he said, ‘someone else has fallen in. You aren’t the only one.’ 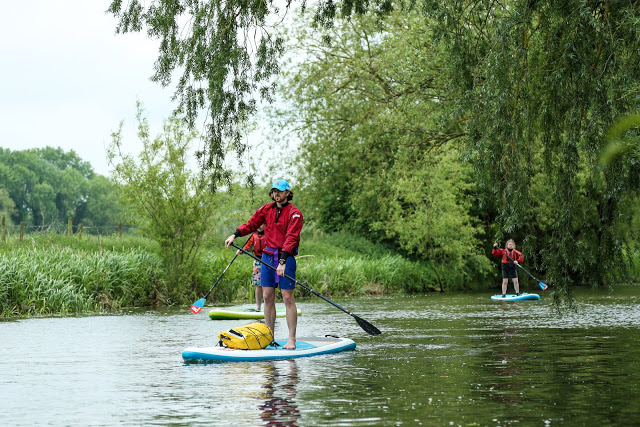 Arran stayed with me for the rest of the journey. To be honest after the first two miles, I’d had enough, as a first go. It was pretty hard work, all that rowing, especially against the wind. I spent the last two miles on my knees, which is acceptable, I believe, within the paddleboarding community. I fell in only five times. By the end I was shivering. 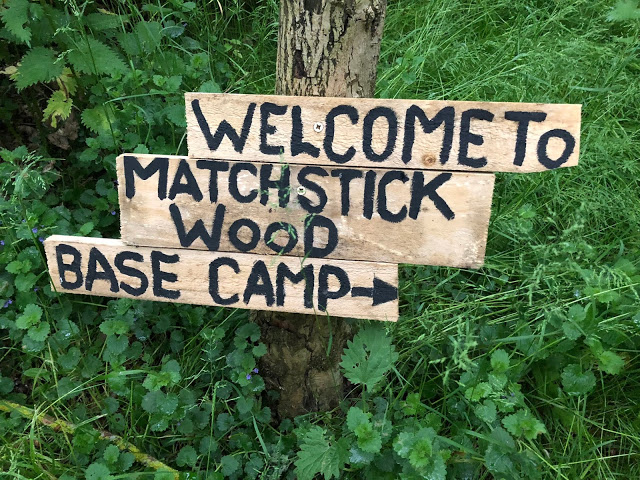 Slipping over muddy steps and following a path to the camp in the middle of the forest, a campfire was blazing. Is there a more welcome sight? Hot chocolate in enamel cups was handed around. I took off my wet clothes under a towelling poncho. I put on my thermals, which doubled as pyjamas.

Later that night we made S’mores over the fire. London and urban life seemed so far away.

‘What’s happening tomorrow morning?’ I asked.
‘Swimming at 6am, breakfast at 7.’
I laughed. Nobody else laughed.
I found the words ‘Are you fucking kidding?’ escaping my lips.
‘No,’ replied the sports writers with puzzled faces. 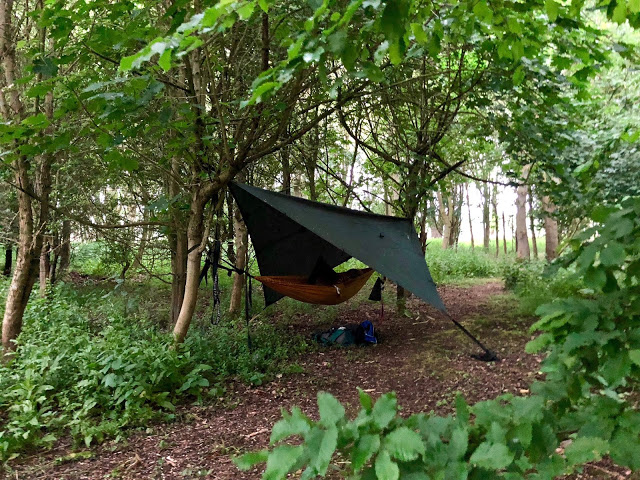 That night I proved my hardcore adventure credentials by sleeping in a hammock suspended between two trees. I barely slept. Everything hurt: my shoulders, my arms, my elbows. Nonetheless I was out of my hammock by 5.55am, ready to do the morning swim. Everyone else was asleep. Fibbers! I thought. 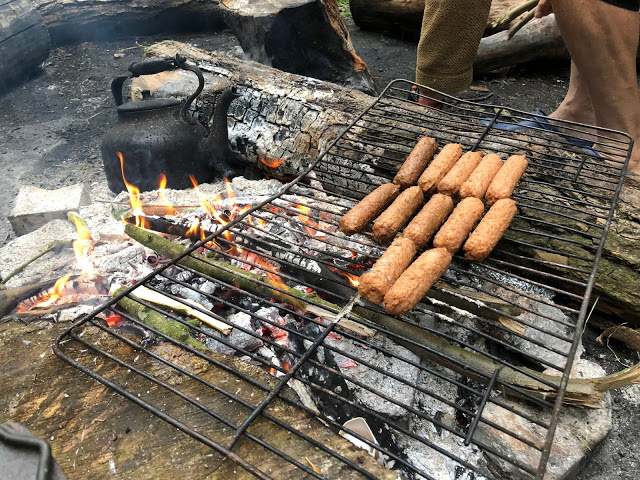 Returning home the next morning, I felt tired but exhilarated. I would definitely do this again, though possibly in better weather. 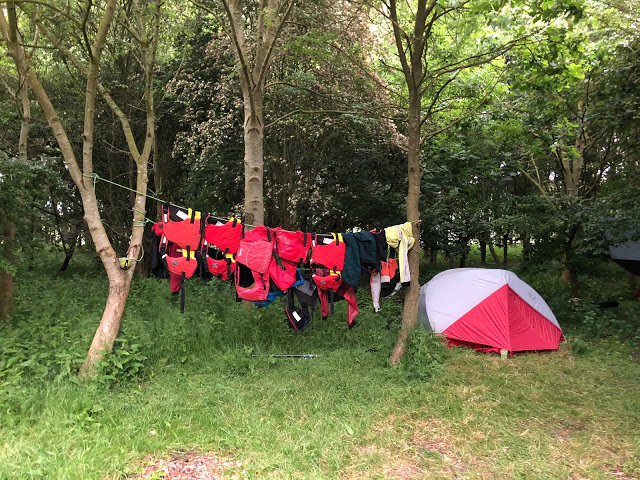